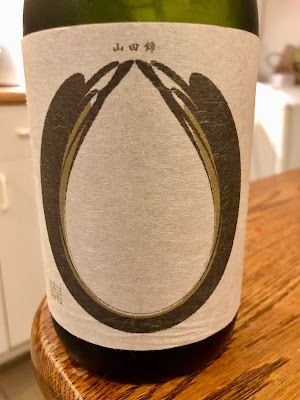 The label for this Sake is reminiscent of a grain of rice, and the large white area in the middle could be the the Shinpaku, the "white heart." The shinpaku refers to the pocket of starch in the middle of the rice kernel, where all the sugars are concentrated. By polishing the rice, you remove the outer layers and get a greater proportion of the starches within. A Daiginjo Sake, which polishes away at last 50% of the rice, embraces the "white heart."
Nanbubijin, Inc., located in the southern region of the Iwate Prefecture in a region called Nanbu, started brewing Sake in 1915 when the Kuji family, which worked in the soy sauce brewing business, decided to expand its business, which was named the Kuji Shuzo. Around 1951, the company decided to start producing "clean and beautiful Sake," renaming itself Nanbu Bijin. Nanbu represents their region while Bijin means "beautiful woman." Together, Nanbu Bijin basically translates as "Southern Beauty."
The Nanbu Bijin "Southern Beauty" Shinpaku Junmai Daiginjo ($35/720ml) was produced from Yamada Nishiki rice, often considered to be the King of Sake Sake and possesses a large shinpaku, and it was polished to 50%, the minimum amount for a Daiginjo Sake. The Sake also has a Sake Meter Value (SMV) of +4 (meaning it may have a touch of sweetness), an Acidity of 1.6 (which is higher than usual), and a 16% ABV. Interestingly, this Sake even has a Kosher Certification.
This is an elegant, aromatic and complex Sake, with a compelling melange of flavors, including melon, strawberry, peach, and lychee, with some underlying minerality and whispers of intriguing spices. It is medium-bodied, luscious on the palate, and with a lingering finish. This is a hint of sweetness in this well balanced Sake, though overall it presents as dry. And at only $35 for a Daiginjo, it is an excellent value as well, as many Daiginjo Sakes sell for $50+.
This is another Sake which works beautifully on its own, but would also pair well with a variety of foods. This would work well with a variety of seafood dishes though with its high acidity, it might also be intriguing with a burger or pizza. Locally, this Sake can be found at Malden Center Fine Wines.
Posted by Richard Auffrey at 3:30 AM