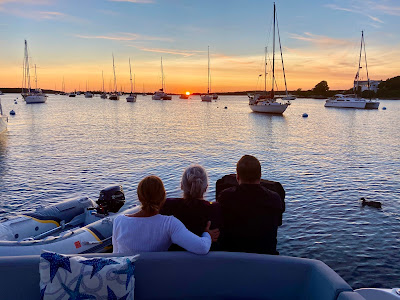 It was a wonderful weekend, spending time and relaxing on a friend's boat in Pocasset, down the Cape. Such serenity and watching the sunset was sublime. There was also home-made Sangria, Margaritas, and a Thirty-Year Old Port. 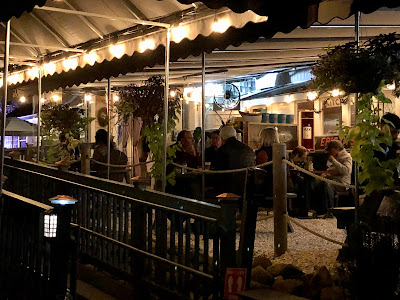 Where to dine on Saturday night? Our friends highly recommended Epic Oyster in North Falmouth so that is where we went. The menu intrigued me and I read other positive reviews of the restaurant, so I was excited to go. Owned by Marc and Sarah Warner, it is primarily a seafood restaurant with some Portuguese influences. And if you don't like seafood, there are other options as well, from steak to chicken.
The building itself is historic, having started as a Tierney dining car in 1922, eventually ending up in Falmouth where it became known as the North Falmouth Diner. Finally, in 2017, the Warners purchased the property, starting Epic Oyster. Marc used to sell wine and also worked at Legal Seafood, while his wife was previously involved in teaching. Both have Portuguese ancestry, and also hired a Portuguese chef for their restaurant.
Currently, the restaurant has a large outside dining area, which wraps around much of the restaurant, and we sat in a booth which was nestled away, providing much privacy and a feeling of safety. During the course of the evening, the restaurant staff seemed cognizant of proper safety precautions, helping to make this a more pleasant and safer experience.
The menu, which is mostly seafood; has lots of options, without being overwhelming. There were 11 different types of Oysters available, all from Massachusetts, and most from Cape Cod. It was cool to note that many of the listings included the name of the oyster farmer. The menu also has numerous small plates as well as larger entrees, including Poke bowls, Salads, Shellfish Bisque, a Burger, Piri Piri Chicken, Prime Ribeye, Bento Boxes and more. Of course they have Lobster Rolls ($32), including a Warm Truffle Lobster Roll ($39). 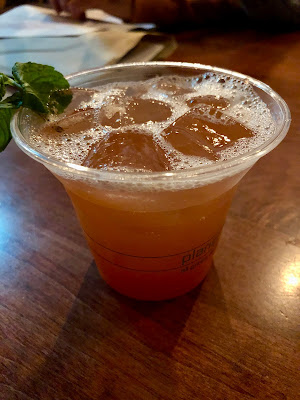 There were three Cocktail Specials ($12-$14), and I opted for the Velvet Fist ($14), which was made with Evan Williams Single Barrel Bourbon, natural ginger ale, and blood orange. It was refreshing and tasty, a fine way to start the evening. 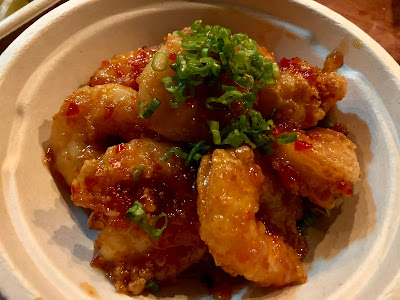 We generally ordered Small Plates, so we could share and experience more of the diversity of the menu. And of course there were plenty of items I'll need to try the next time I visit Epic Oyster. I really want to taste their Shellfish Bisque.
The Bang Bang Shrimp ($16) includes flash fried shrimp, sweet chili, scallion, and shredded iceberg. Large, plump shrimp with a thin crunchy coating and a delectable sweet chili sauce. The dish was well made, balanced well, and a real winner. 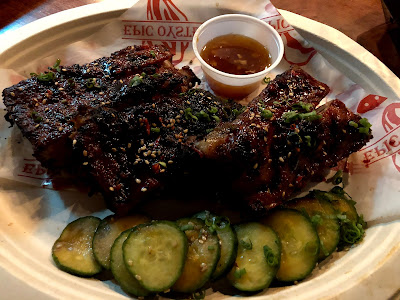 The "Old School" Spare Ribs ($20), prepared take-out style with house duck sauce and home-made pickles, was another winner. Extremely tender, meaty and with a luscious and compelling sauce. There actually was no need for the side of duck sauce as the sauce already on the ribs was so delicious and didn't need anything extra. And pickles were a nice, crunchy side, with a touch of sour. 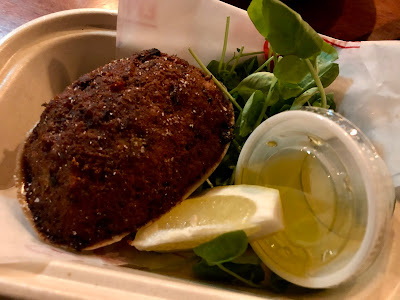 The Stuffed Quahog ($7), which came with drawn butter and lemon, was quite large and very tasty, with plenty of pieces of clam, and a nicely spiced stuffing. A true touch of New England. 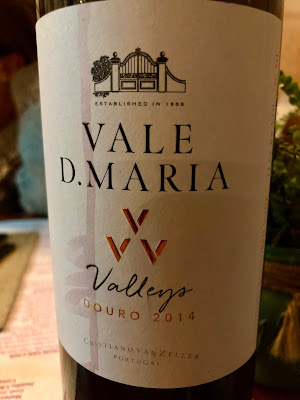 Their Wine list has about 13 choices by the glass ($9-$26) and17 choices by the bottle. You'll find Sparkling, White and Red wines, with plenty of big brands. Prices are generally very reasonable, such as only $59 for Veuve Cliquot, which is essentially its retail price. The Caymus Cabernet is $100, for a liter bottle, which is also about retail. Excellent deals for such wines.
However, the restaurant also has some wines that aren't listed on their menu, and you would only know that if you had inside information as they don't mention that fact on their menu. Fortunately for me, someone told me about their off-menu wines so I asked about them when I was at the restaurant. I ultimately selected the 2014 Vale de Maria Three Valleys ($60), an excellent Portuguese wine, priced at about twice the usual retail.
The wine is a field blend of various Portuguese grapes, from 35+ year old vines, and the grapes are foot trodden in traditional lagares. Complex and intriguing, silky and lush, the wine had fresh notes, as well as a touch of age. Delicious and compelling, I give it a hearty recommendation. 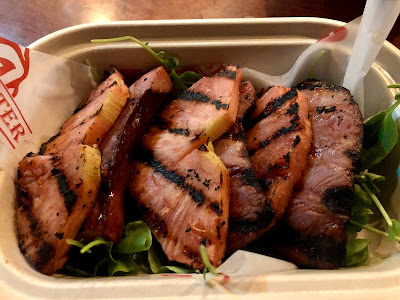 We ordered a Side of the Grilled Chourico & Azorean Pineapple ($12). The pineapple slices were juicy, with a touch of smoke, and the chourico was plump and meaty, with a pleasing taste. The chourico went very well with the wine. 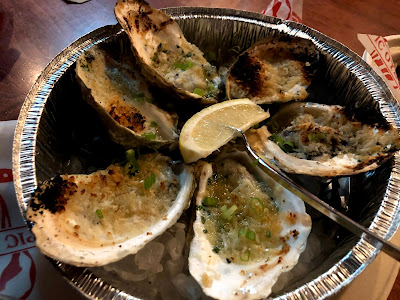 The Grilled Oysters ($20) are made with a garlic-herb butter and pecorino crumbs, and were another delicious dish. The pecorino crumbs added an extra touch of saltiness to the briny oysters and the sweet and herbal butter. 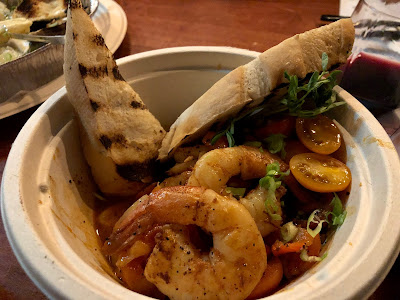 The Shrimp Mozambique ($16) was made with Portuguese EVOO, garlic, pepper, cilantro, and whiskey flambé, and came with a couple slices of bread. Again, the shrimp were plump, though this time in a delightful spicy sauce with sliced cherry tomatoes. The sauce was also great for dipping the bread. Of the two shrimp dishes, I give a slight preference to the Bang Bang Shrimp but both are worthy dishes. 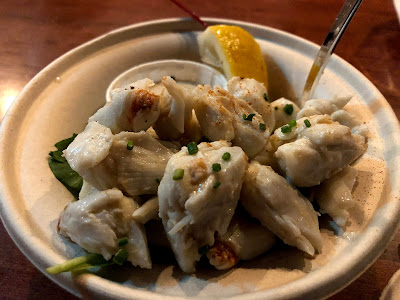 A simple dish was the Lump Crabmeat Cocktail ($18), accompanied by a mustard dressing, but with an ample mound of sweet crab. I asked for a some cocktail sauce, which they quickly brought as I'm not a fan of mustard dressing, though the others with me enjoyed it. 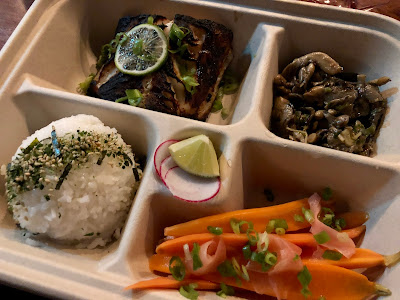 Finally, we ordered one of the large entrees, the Miso Black Cod Bento ($36), with miso marinated black cod, pickled oyster mushrooms, sushi rice, pickled ginger carrots, and scallions. The black cod was excellent, with a tasty sweet glaze, and that sweetness was balanced by the pickled mushrooms and carrots.
Service was excellent, and though we had plastic silverware and paper plates, they were all of high quality, sturdy and even visually appealing. The dishes were ample, fresh, delicious and prepared well. Though it isn't an inexpensive restaurant, the prices are reasonable considering the quality of the ingredients, the size of the dishes, and the excellent taste. Wine prices though are very reasonable, and help to make your overall check lower than it might be at other restaurants where wine prices can be as much as three or four times the usual retail price.
I definitely want to return to Epic Oyster and it earns my hearty recommendation.
Posted by Richard Auffrey at 11:39 AM