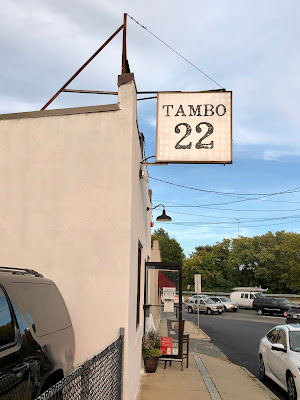 It's an extremely difficult year to open a new restaurant. At the beginning of 2020, I was excited about the forthcoming Tambo 22, a new Peruvian restaurant headed by Chef Jose Duarte. I've been a fan of Chef Duarte for many years and loved Taranta, his Peruvian-Italian fusion restaurant in the North End (which sadly has recently closed). Taranta was a fusion restaurant that worked very well and helped to introduce Peruvian ingredients to the Boston area. I've also seen Chef Duarte at many food events, especially charity ones, and he has always been personable, gracious and kind, simply a genuinely nice person. 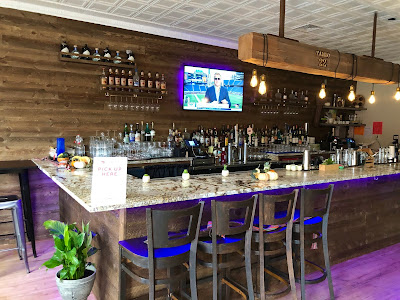 Tambo 22 opened in March but soon thereafter had to close due to the pandemic. That had to have been brutal, having to shut down just as your restaurant had barely opened. I didn't have a chance to visit it when it first opened but over this past weekend, I made my first visit and eagerly look forward to dining there once again. It was an excellent dining experience, with great food and drinks, and it's a worthy successor to Taranta. Kudos to Chef Duarte! 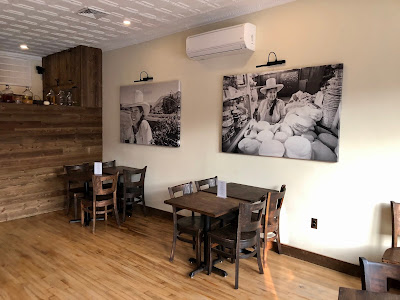 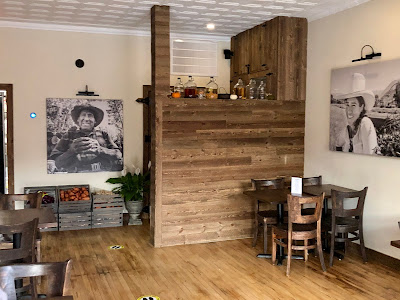 The Incas constructed thousands of “tambos” on their roads, and although there was some variation, a tambo was basically like an inn, providing food, drink and lodging. Chef Duarte wanted to create a "tambo," without the lodging, at "the crossroads of Route 1 and Route 16," in Chelsea, where he resides.  It's a relatively small restaurant, and initially possessed about 20 seats inside, though with pandemic regulations, there is less interior dining and they have also set up some exterior dining. The interior is a bit rustic, with some great photos of Peru and some of its people. There is also a bar to the left of the restaurant, and recent rule changes will allow them to have diners sit at the bar. 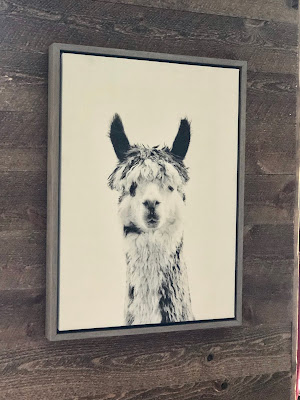 And who doesn't love llamas? 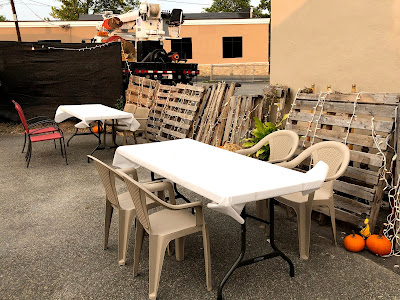 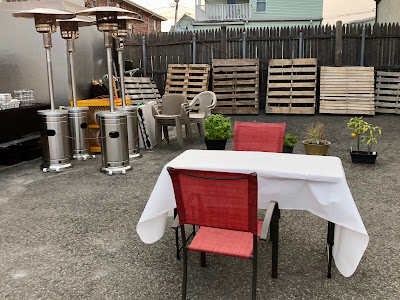 We dined outside, and the tables are all properly spaced, and they have tried to make the area more decorative, with some palm trees, pumpkins, and plants. They have heaters, though they were unnecessary on the evening we were there. Because their seating is limited, I would suggest making reservations, especially on the weekends.
The Drinks menu has plenty of interesting options. For Cocktails ($12-$14), you can opt for the traditional Pisco Sour (always a good choice), the Chilcano Smash (made with Pisco, lime, mint, & ginger beer), the 22 Old Fashioned (made with Four Roses Bourbon, Salted Honey, Peruvian chuncho bitters, orange) and others.
They have a few Draft beers, all from New England, and 6 beers by the can, including two Peruvian beers, Cusquena (a golden lager) and Cristal (an American style lager). The Wine list has about 11 wines available by the glass ($8-$11.50), and about 18 by the bottle. Almost everyone wine is from Argentina and Chile, many organic/biodynamic. There are also Nonalcoholic options, including, Chicha Morada, Inca Kola, Handmade Passion Fruit Soda and Handmade Guava Soda. The drinks menu complements the Peruvian cuisine. 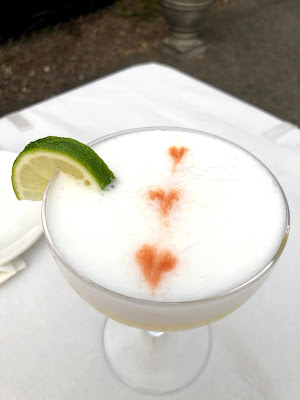 I had to order a Pisco Sour ($13), made with Pisco, lime, sugar, egg white, and angostura bitters. For more information about Pisco and Pisco Sours, including possible origin stories for the cocktail, check out my previous post, La Mar, Pisco Sours & A Cautionary Tale. The Tambo Pisco Sour was excellent, well balanced, frothy and with only a hint of sweetness. It's definitely on par to those I enjoyed at La Mar and the little hearts atop the froth were a nice touch. 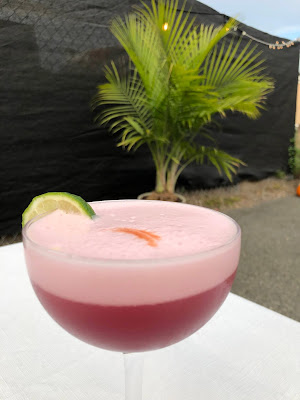 With the Pisco Sours, you also have the option of adding Chicha Morada, Guava or Passion Fruit, to add a different flavor. I opted for another Pisco Sour, but this time with Chicha Morada, a purple corn-based drink. Chicha Morada has ancient roots in Peru and it continues to still be widely consumed in that country. This cocktail was also compelling and refreshing, once again with just a touch of sweet. It had an almost red berry flavor to it, though with its own unique taste. Highly recommended. 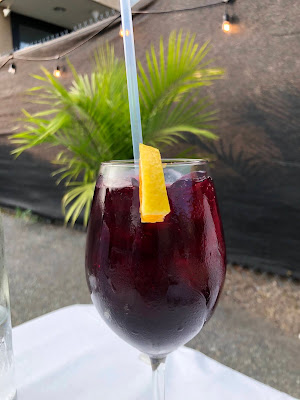 They also have a Red Sangria ($12), made with Red Wine, Pisco, Triple Sec, Chicha Morada, Lime, and Orange. This was another excellent drink, well-balanced and with only a mild sweetnesst. Very refreshing, with a nice blend of flavors, and you could easily drink a few of these over dinner. 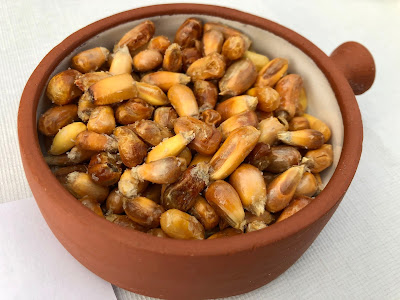 With out drinks, we were served a complimentary bowl of Cancha, the Peruvian version of "corn nuts." This dish uses large-kerneled corn, called maíz chulpe or maíz cancha chulpe, which are tossed with oil and toasted in a hot skillet. Once done, a little salt is sprinkled atop them. A fine accompaniment to drinking, these salty, crunchy pieces of corn were light and tasty.
The Food Menu is small, but diverse, and divided into three sections: Starters, Salads and Mains. There might also be some Specials offered, and there were two specials on the evening we dined there. The Starters section has about 8 choices ($10-$16), from Ceviche del Dia to Mussels, Pulpo Al Olivo to Better Than Buffalo Wings. The Salads section has 2 choices ($10-$12) including an Ensalada Amazonica and an Ensalada Mixta Con Quinoa Y Queso Fresco, both which you can add Salmon, Beef Anticucho Skewers, or Grilled Paiche Skewers. The Mains section has 9 choices ($15-$32), including the Tamburguesa (a burger made with Alpaca), Lomo Slatado a Lo Diego (beef tenderloin), Quinoa de Verano (grilled summer veggies & quinoa), and Paiche Amazonico (banana leaf-wrapped Amazonian Paiche). 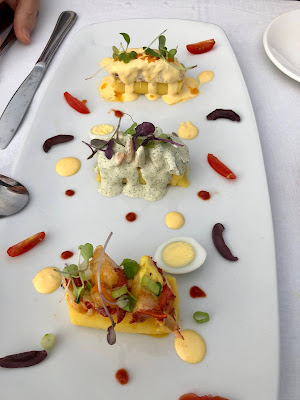 We began with the Starter of Causa de Mariscos ($16), made from Yellow Peruvian Potato, Seafood of the Day, Rocoto (a type of chili pepper), and Caviaroli (an olive oil). There were three different Causa, each made from a different type of seafood with a different sauce. Such a beautiful presentation. There were thin slices of olive and peppers on the plate, with a couple other sauces, including one very spicy one. The seafood was atop a creamy potato base and each was delicious, with its own unique flavors. The Lobster Causa was my favorite of the three. 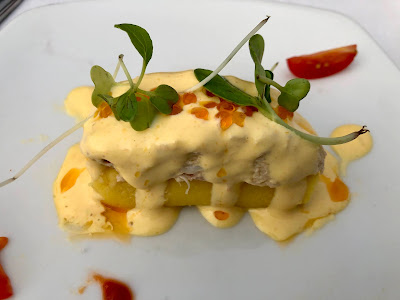 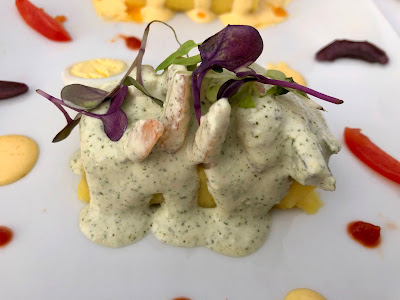 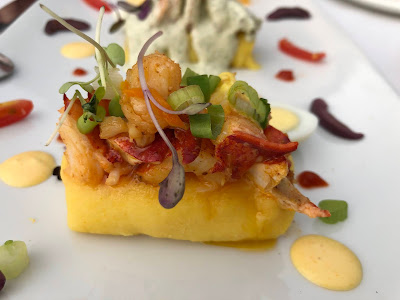 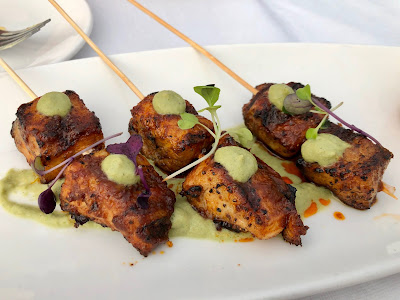 We also opted for one of the Special Starters of the evening, Paiche Anticuchos Skewers ($16). For more info about Paiche, check out my prior article, Paiche, the Ood of the Amazon. In short, it's one of the largest freshwater fish in the world, and is native to South America. Paiche meat is white, firm, relatively boneless, high in Omega-3s and high in protein. It's flesh also possesses a more subtle and elegant taste, which means it is versatile, allowing a wide range of flavor pairings and preparations. If you love seafood, then you should try Paiche. These skewers were scrumptious, such tender and moist, white flaky meat with a nice char. Perfectly prepared, this might even convince a seafood hater to embrace fish. Highly recommended! 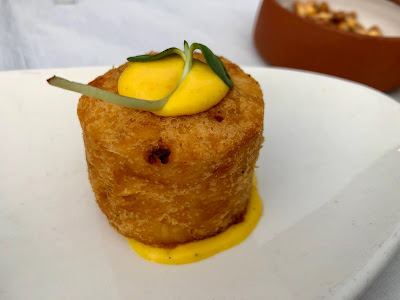 Accompanying the Paiche skewers was a fried Yuca, with a huancaina (spicy cheese) sauce. A crisp, fried coating with a fluffier interior, and much lighter than other fried yuca I've tasted before. The sauce added a mild spicy kick which complemented the yuca. 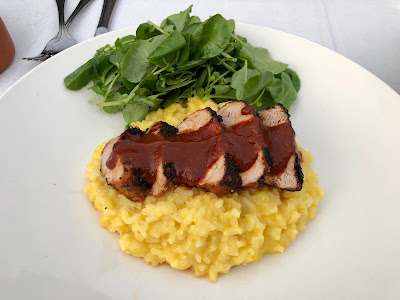 For Mains, we had the Lomito de Chancho Anticuchero ($22), grilled Pork Tenderloin with Anticucho Sauce and an Aji Amarillo Risotto. The pork was properly tender and meaty, with a great flavor from the anticucho sauce, which added some peppery notes. The risotto had a mild spicy kick to it as well, from its hot yellow pepper paste. It was a hearty dish, which will go well in the fall and winter. 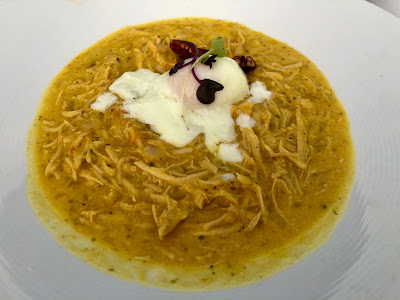 Speaking of perfect comfort food, the Aji De Gallina En Tazon ($22) hit that mark! It's made with slow cooked Pulled Chicken, creamy Peruvian Pepper Sauce, Yellow Peruvian Potato, Q’s Botija Olive Roasted Pecans, Choclo White Rice, and a "Perfect Egg." It is served with a side of white rice, with bits of Choclo (a large-kernel Peruvian corn). I loved this dish, which possessed such a complex and compelling taste, with plenty of tender chicken meat, and bits of extras, from the small potatoes to the pecans. And the egg, with its soft yolk, added even more flavor. It seems like a simple dish, yet there is so much going on and everything works so well together. Highly recommended! 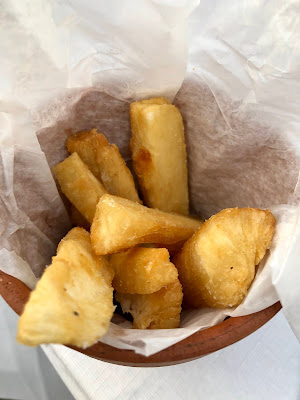 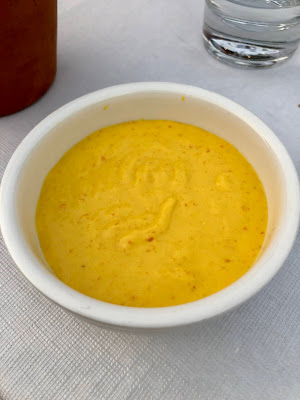 I also ordered one of the Starters as a side, the Yuca Frita ($10), which came with a side of Huancaina Sauce. The Yuca was just as good as the larger piece that came with the Paiche skewers. They were crispy on the outside, but fluffier inside, definitely some of the best fried yuca I've ever had. They are definitely firmer than a regular French Fry, but there's nothing wrong with that in the least. 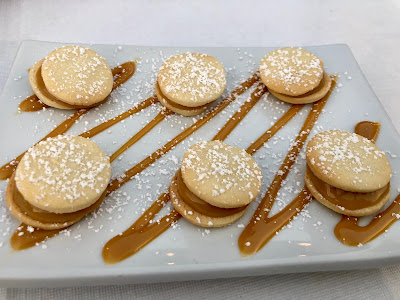 Currently, the restaurant doesn't have a Dessert menu, though it will come in the future. However, they did provide a complimentary plate of these tiny cookies, filled with Dulce de Leche. Flaky and light cookies with that sweet and creamy Dulce made for an excellent ending. 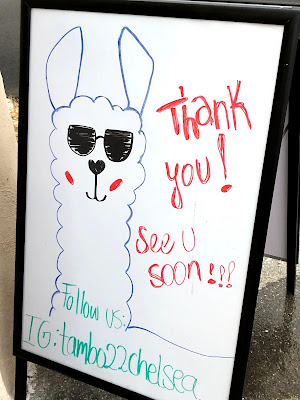 Overall, I was impressed with Tambo 22, and their Peruvian cuisine was well-prepared, aesthetically pleasing, cooked perfectly, and delicious. The blending of interesting Peruvian ingredients delivered some intriguing and different flavors. Prices are reasonable considering the quality, quantity and taste of the dishes. The cocktails were also well made, balanced perfectly and not trying to rely on sweetness to conceal the flavors of the cocktail ingredients. Service was very good too and it was pleasant dining outside. Chef Jose Duarte has created a fine, new restaurant, though I expected as much from such an excellent chef. I can't wait to return, to try more of the menu (like the alpaca burger) and it earns my highest recommendation.
Have you dined at Tambo 22 yet?
Posted by Richard Auffrey at 3:00 AM

Haven't been there yet but have hopes to go soon. I love Chef Jose's cooking and am sure this will be another great option.