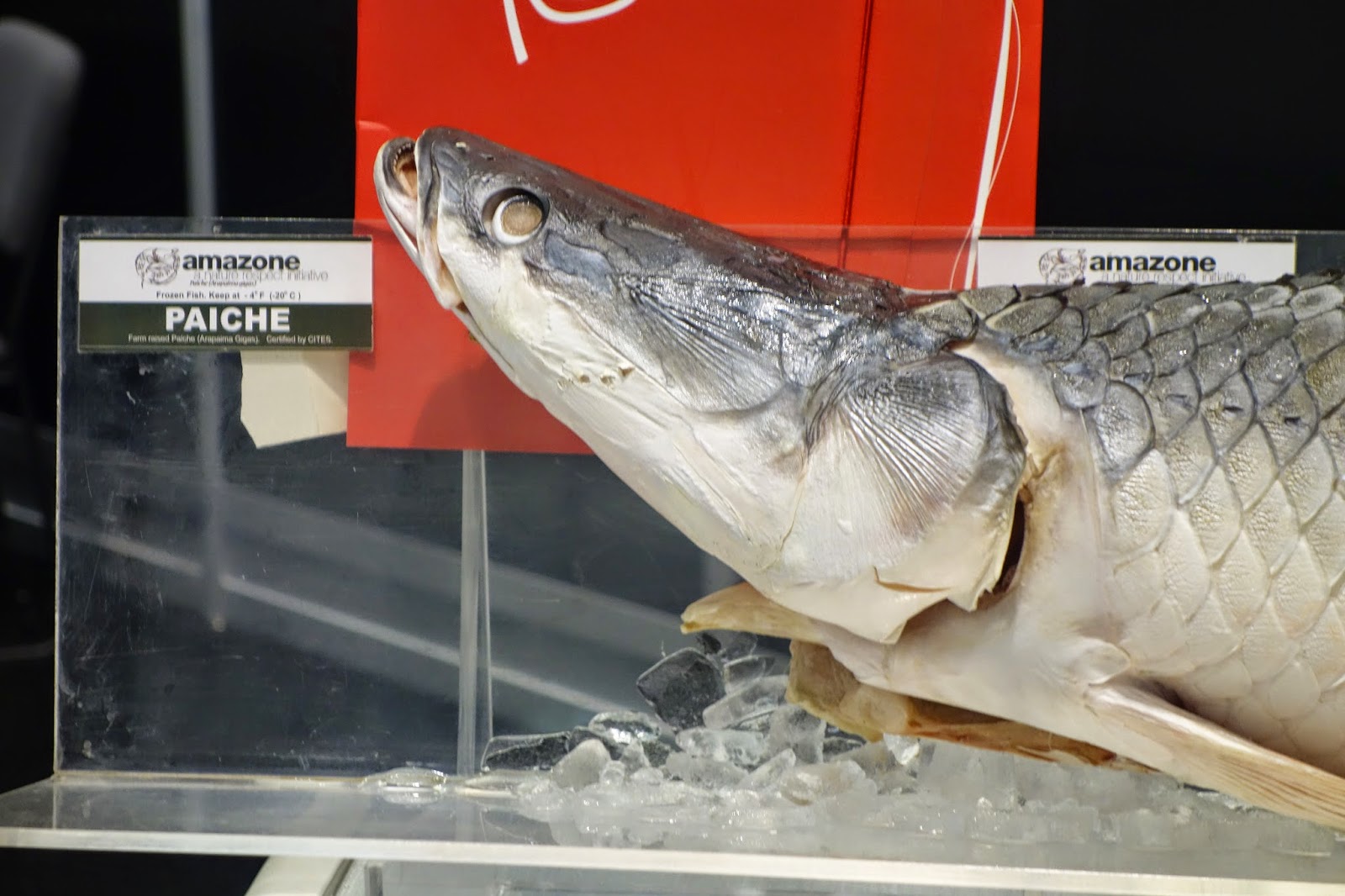 A prehistoric fish? It looks almost the same as it did over five million years ago and it was on display at the Seafood Expo North America (SENA). One of my favorite parts of SENA is finding more unusual fish species and sharing their tales, trying to get more people to enjoy these intriguing fish. Let me now tell you about the ancient Paiche.

Paiche ( pronounced "pie-chay"), also known as Arapaima or Pirarucu, is a South American freshwater fish, one of the largest freshwater fish in the world. They can be up to 15 feet long and weigh up to 400 pounds. It is also sometimes known by nicknames such as the "Amazonian Bass" or the "Cod of the Amazon." Interestingly, Paiche also possess pseudo-lungs which allow them to breathe air like we do.

They have been popular food fish in the Amazon for many years, though it wasn't until the 20th century that harvesting started to seriously deplete stocks. Traditionally, the tongue of the Paiche is thought to have medicinal qualities, but as the tongue is also bony, it is sometimes used as a scraper. The Paiche's tough scales are also commonly used as small files. The Paiche's popularity eventually led it down a dangerous path,and the Brazilian government had to ban commercial fishing, Only limited fishing of Paiche is now permitted, and generally only in remote regions by indigenous peoples. 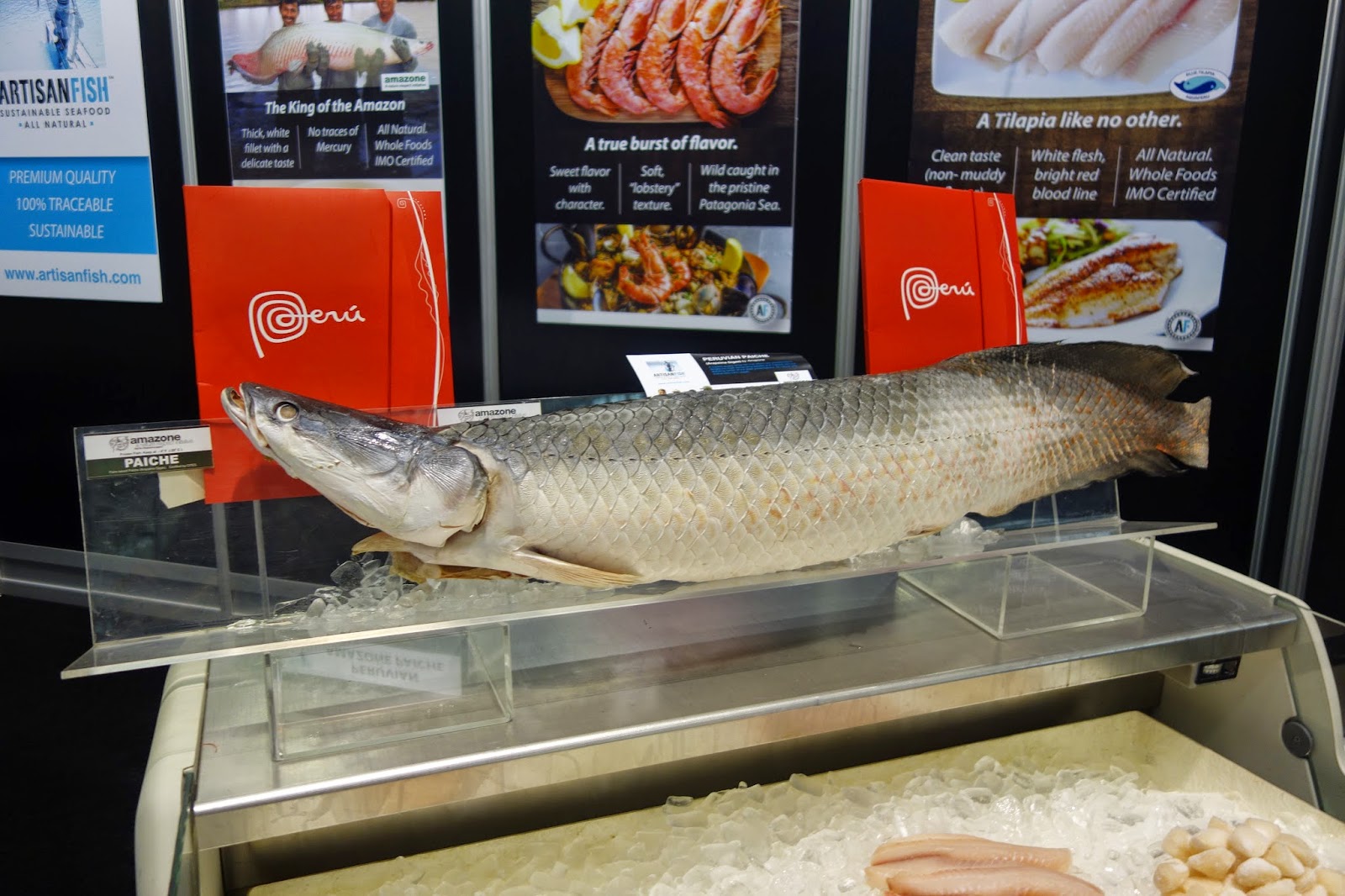 As people still want to eat Paiche, it has led to the establishment of farmed Paiche operations, such as that of Amazone, who was exhibiting at SENA. Amazone is committed to environmental responsibility and sustainability, hoping to preserve the Paiche species by lessening the pressures on wild stocks. In their farming operation, there is no genetic or chemical interventions and they have a full cycle farm, including their own hatchery. Their operation has been certified as sustainable by IMOswiss AG.

Paiche meat is white, firm, relatively boneless, high in Omega-3s and high in protein (20 grams per 100 grams of meat). It's meat also possesses a more subtle and elegant taste, which means it is versatile, allowing a wide range of flavor pairings and preparations. If you look at some Paiche Recipes from Amazone, you'll find a nice diversity of dishes. In some respects, it resembles cod, though has a firmer texture and there are some differences in the taste.

Though they did not have any samples of Paiche available at SENA, I have enjoyed Paiche before at a couple local restaurants, including Taranta, where Chef Jose Duarte has a Paiche dish (sourced from Amazone) regularly on the menu, though the preparation varies on a regular basis. I found that Paiche has a nice and firm texture with a subtle and slightly sweet flavor, reminding me a bit like cod. It is a tasty fish and if you are in the Boston area, you should check our Taranta. Whole Foods Markets sometimes sells Paiche too, and they even offer Recipes.

Enjoy an ancient and sustainable fish, the Amazonian Paiche.
Posted by Richard Auffrey at 4:12 PM