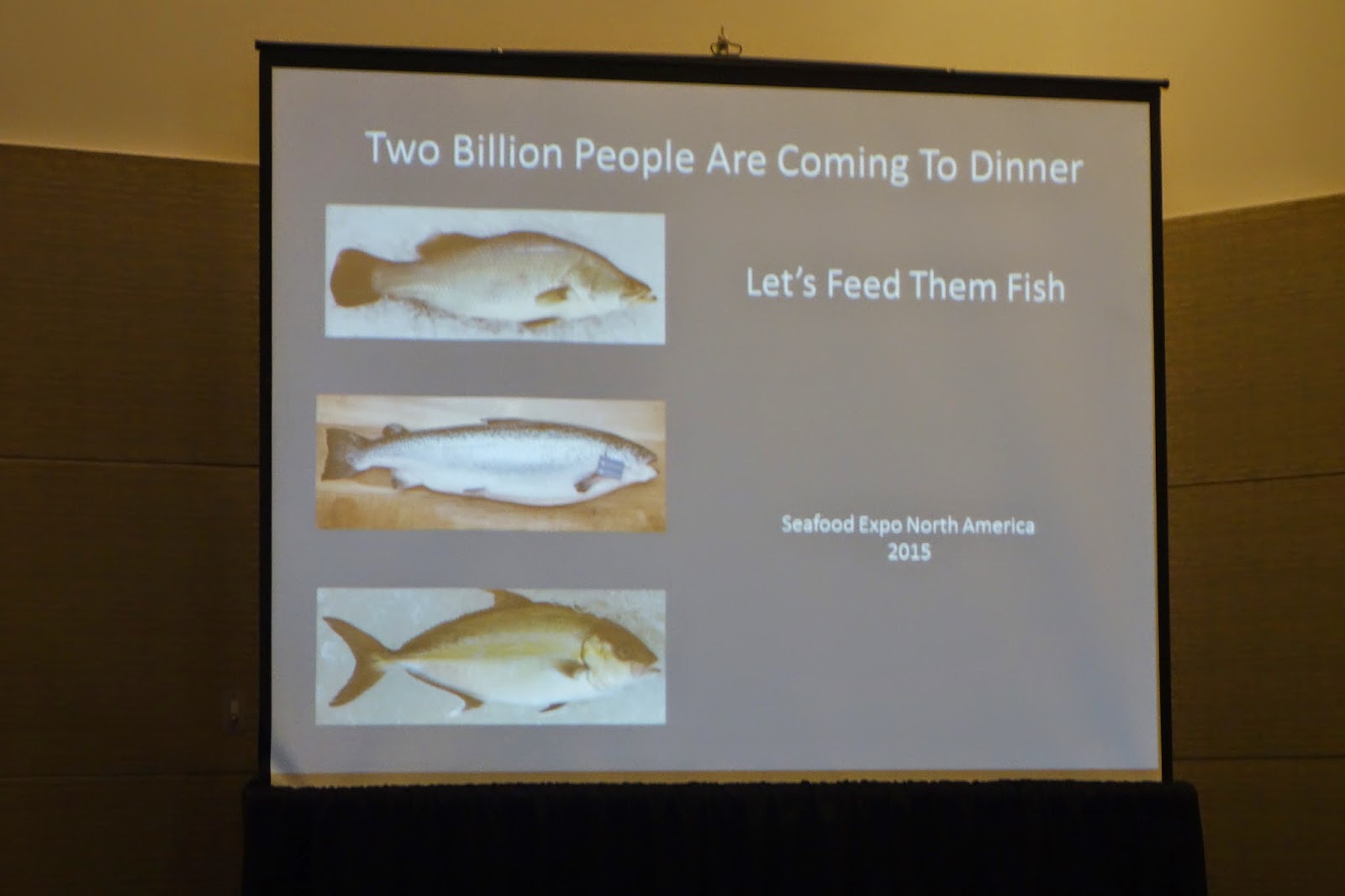 There's a strange contradiction in consumers refusing to eat farmed salmon yet having no compunction about consuming factory farm chicken, beef and pork. People need to not only understand the importance of aquaculture but also how it constantly improves, moving toward greater sustainability. With the projections for population growth in the next 30-40 years, aquaculture may become vital to our survival.

At the Seafood Expo North America (SENA) I attended a session titled 2 Billion People are Coming to Dinner, Let's Feed them Fish! The focus of the session was the benefits of aquaculture and how it may be the solution to global problems related to a burgeoning population. The three panelists included Scott Nichols,the  Director of Verlasso Harmoniously Raised Fish, Neil Sims, the Co-founder and CEO of Kampachi Farms, and Josh Goldman, the Co-Founder and CEO of Australis Aquacutlure, LLC. As all three panelists are engaged in aquaculture, it was clear what to expect from the session, though that didn't lessen the validity of what they had to say. It still would have been interesting to have a dissenting or skeptical voice on the panel.

Scott Nichols spoke first, and I should mention I've conversed with him at a few prior Expos as well as written about Verlasso, a salmon farm which I think is doing an excellent job at sustainability. Scott began by posing a couple questions, such as where does our food come from and does our food supply need to change. Land-based agriculture is resource intensive, consuming 70% of our water supply and 30-40% of our available land. By the mid-2040s, it is projected that the world population will grow from 7 to 9 billion, requiring us to double our food supply. There doesn't seem to be adequate resources to expand land-based agriculture to cover such a great need for food so we must seek elsewhere.

Every other year, the United Nations releases a report on wild fisheries and noted in 2008 that 80% of wild fisheries are harvested at sustainable limits. By 2014 though, that figure had increased to 90%, indicating that wild fisheries will be unable to handle the large population expansion. If land agriculture and wild fisheries cannot handle it, where else can we look? Aquaculture may the solution we need.

The average American consumes an average of 14.4 pounds of seafood annually, though they should be consuming at least 26 pounds. If the 38 million people living in California each ate the current average amount of seafood, then those residents could be provided with sufficient farmed seafood, under ideal conditions, with only 1 square mile of ocean. If we increased average consumption to 40 pounds, and also increased the population of California, we would still only need 31 square miles of ocean. The main caveats are that the aquaculture would need to be sustainable and also result in a net production of fish. By sustainable, Scott means that the practices today won't adversely affect the future.

Scott then briefly discussed Verlasso, which was founded in 2006. With aquaculture, there has long been a concern with feed, with a goal of a Fish In, Fish Out (FIFO) ratio of 1:1. That means that one pound of feed would lead to one pound of weight of the fish. That feed usually contains fish oil and fish meal. Prior salmon farming often had a FIFO closer to 4:1 or even 5:1, meaning that lots of wild fish needed to be caught to feed the farmed salmon, which is a sustainability problem.

How can that ratio be lowered? Consider that Omega-3 fatty acids pass through the food chain, beginning with algae. Verlasso wondered if there might be another way, something other than the food chain. They designed a special yeast which was able to pass on Omega-3s to their fish and give them a FIFO of 1:1. Scott feels we need to stop hunting fish for feed, and seek alternative feeds,such as the yeast they use. In addition, he stated that we need to continue seeking ways to increase sustainability.

He finished his talk, recommending that any of the students or postdocs in the room should consider a career in aquaculture. 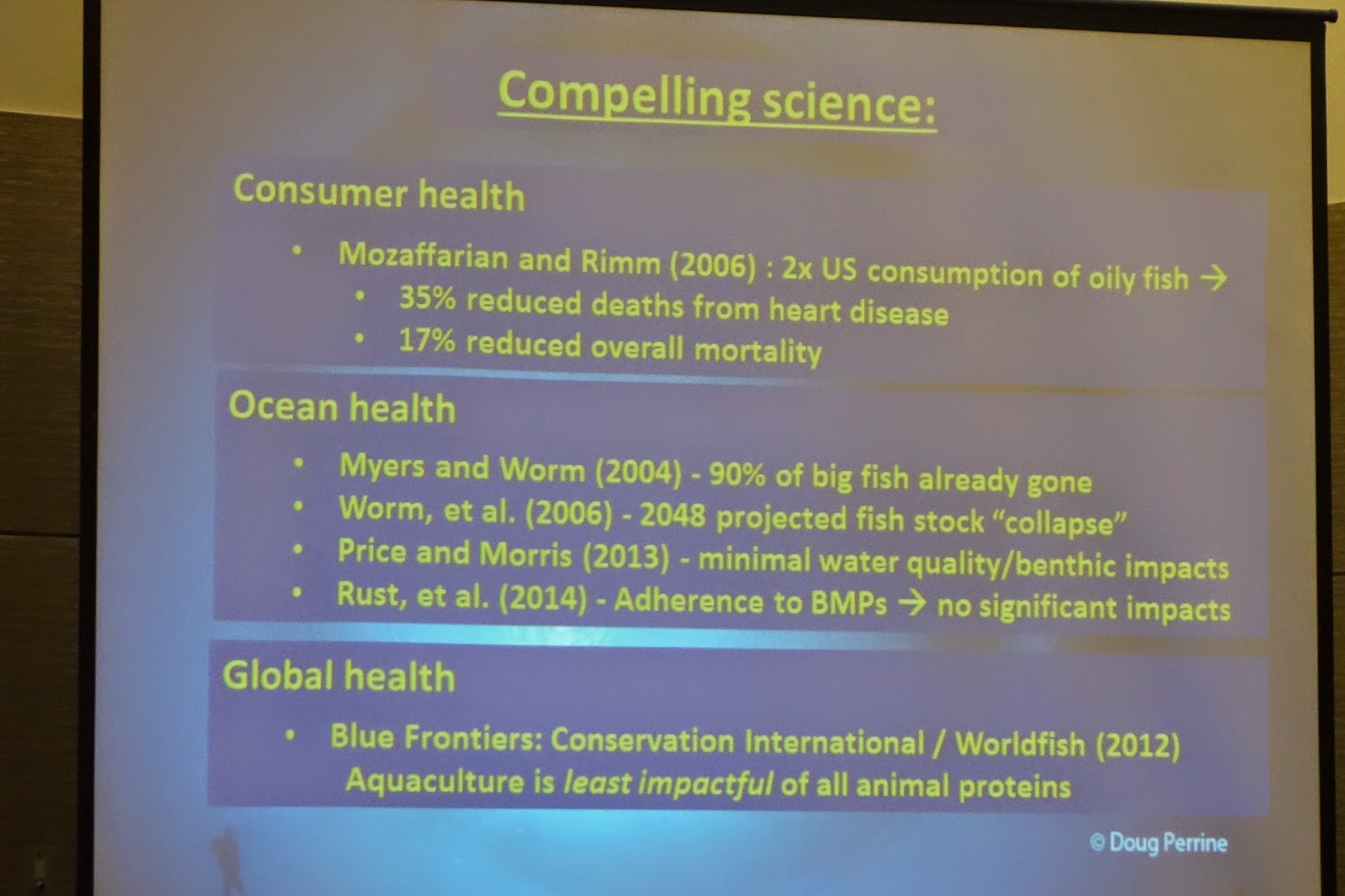 Neil Sims spoke next, about undoing the de-marketing of the "F"word, that word being "farming." He stated that "fish farmers have to be optimistic," and he provided some of the reasons why they should be optimistic. There is compelling science supporting the vast benefits of seafood, for individuals, the oceans and the world. In the photo above, you will see citations for some of the most important scientific studies and Neil told everyone to memorize these studies, so they could be shared with anyone who tries to dispute these matters. The seafood industry generally understands about the benefits of aquaculture, as does NOAA, and most NGOs also get it. It is the public that has most of the issues. 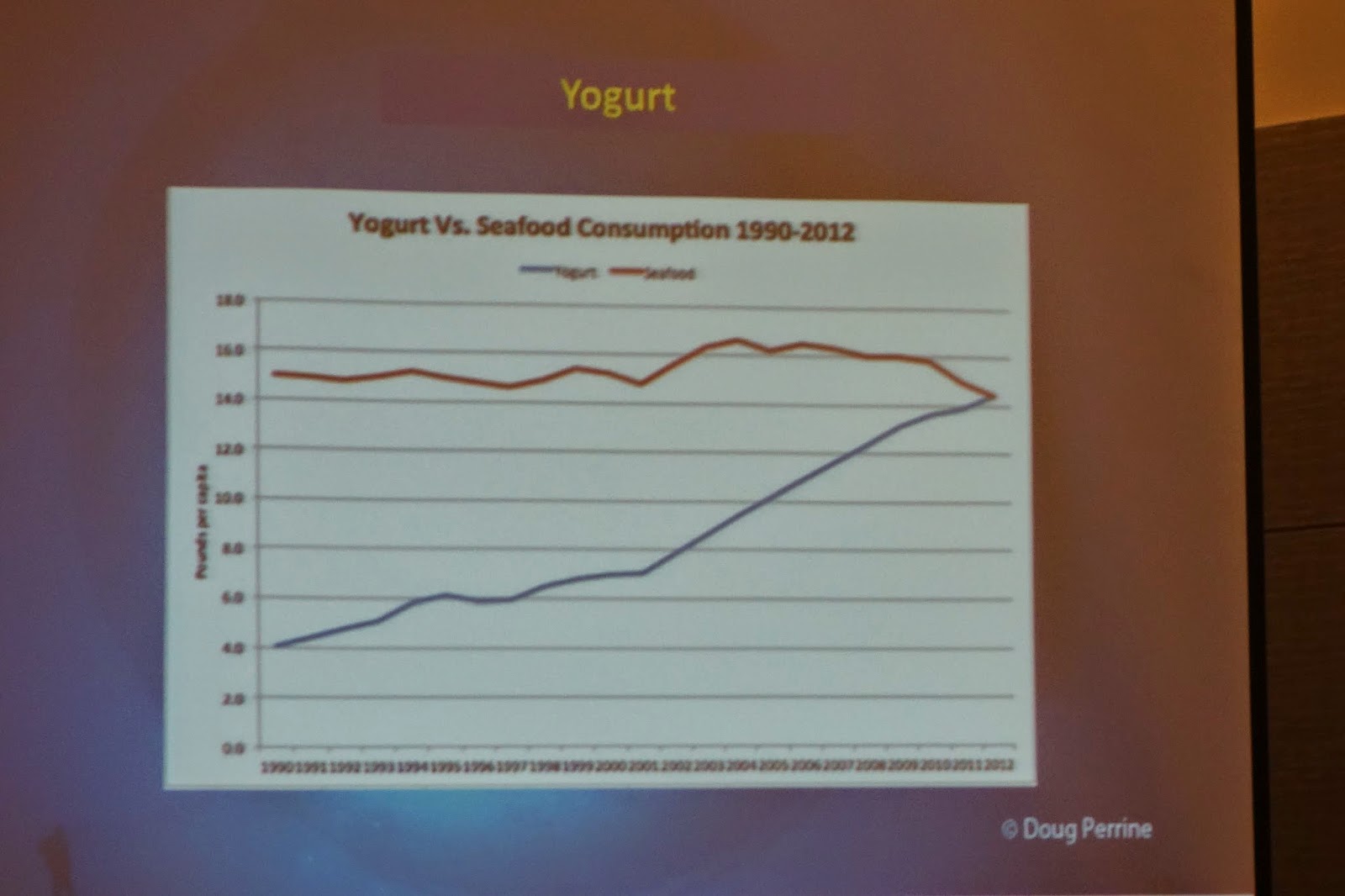 Neil also mentioned some of the pessimism within these issues, showing us a shocking slide on the comparison of Yogurt vs Seafood consumption. Yogurt has seen crazy growth, about four times, when seafood consumption over the last 6-7 years has actually been declining. How can that be turned around? Neil feels that it is a moral responsibility to grow our seafood. We also need to give credit where it is due, to essentially celebrate our successes.

To combat decreasing seafood consumption, and to counter the negative messages held by the public, it will require a concerted effort. We need to disseminate the science and take individual action to educate others. Attribution of blame for these problems won't resolve the matter. And Neil feels that significant change will only occur when NGOs take the initiative to lead on the issue of aquaculture. They are seen as independent organizations so their word is taken more seriously. The public won't just accept the word of aquaculture operators and owners.

For the final section, Josh Goldman spoke, mentioning the growing pressures faced by the global food system. Though there has been much to celebrate due to the green revolution, the world faces new problems such as volatile food prices, which have led to destabilization and civil unrest in some countries. Many world resources, such as global capture fisheries, have reached their peak but one of the few that hasn't reached its peak yet is aquaculture, indicating its potential for growth. It is the most efficient method of food production. Josh ended by discussing their own barramundi, a fish that is hardy, possesses plenty of fecundity, has rapid growth, and dietary flexibility. They have a closed system in Massachusetts but have started expanding, with another facility now in Vietnam.

None of the three speakers addressed a couple vital elements in the battle against world hunger, and that is the issue of food waste and access. By some calculations, there are about 800 million people in the world suffering from chronic undernourishment, despite the fact that the world produces sufficient food to feed the entire population. However, not everyone has equal access so people go hungry despite there being sufficient food for them. In addition, it is said that we waste maybe 40% of the food that is produced, and that significant percentage contributes to the problem of hunger.

It is not enough to address the amount of food we produce, nor enough to use aquaculture to create enough food for an additional two billion people. We must address other issues too, like waste and access, or our efforts in producing more food will be for nothing. I believe in aquaculture and definitely see it as a necessity for our future survival. I just know that alone, it is not the solution.
Posted by Richard Auffrey at 3:00 AM