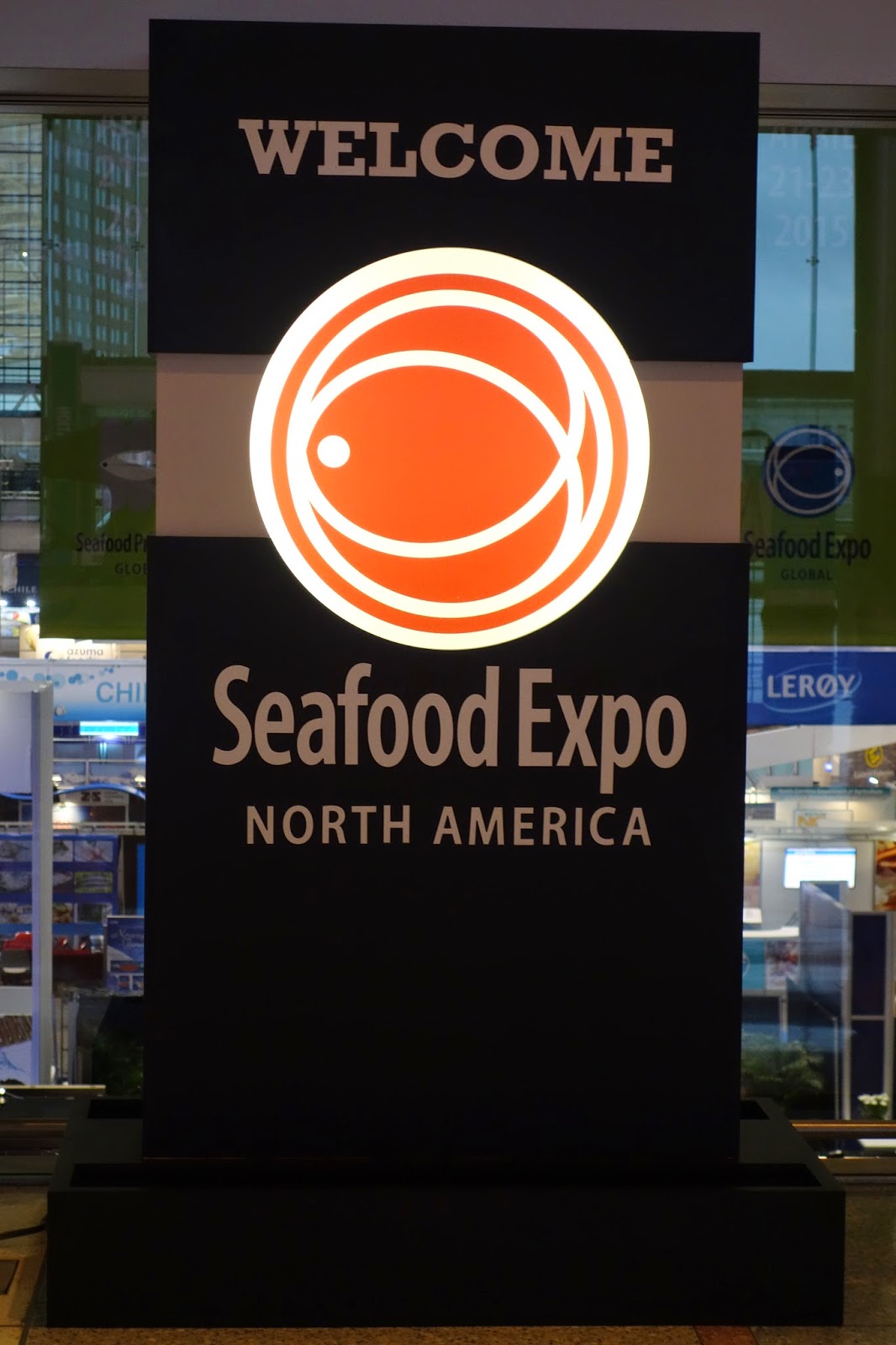 “The sea can bind us to her many moods, whispering to us by the subtle token of a shadow or a gleam upon the waves, and hinting in these ways of her mournfulness or rejoicing. Always she is remembering old things, and these memories, though we may not grasp them, are imparted to us, so that we share her gaiety or remorse.”
--H.P. Lovecraft

It's time to wind down my coverage of the Seafood Expo North America, though I assure you that I will continue to write about seafood issues, including matters that inspired by what I learned or discovered at the Expo. Every Tuesday, you can look forward to a new seafood-related post on my blog. And if there is a seafood issue you would like to see me cover, drop me a line and I'll see what I can do.

For this last post about SENA, I wanted to raise some final questions and issues about seafood matters, thoughts which have come to mind this past week. Each of those points is worthy of a full post, but time is needed for the ideas to percolate and come to fruition. Or additional research is needed. Some of these thoughts touch on important themes at the Expo, as well as potential themes for the future. I would love for these final ponderings to develop into conversations and I welcome any and all comments about these matters. 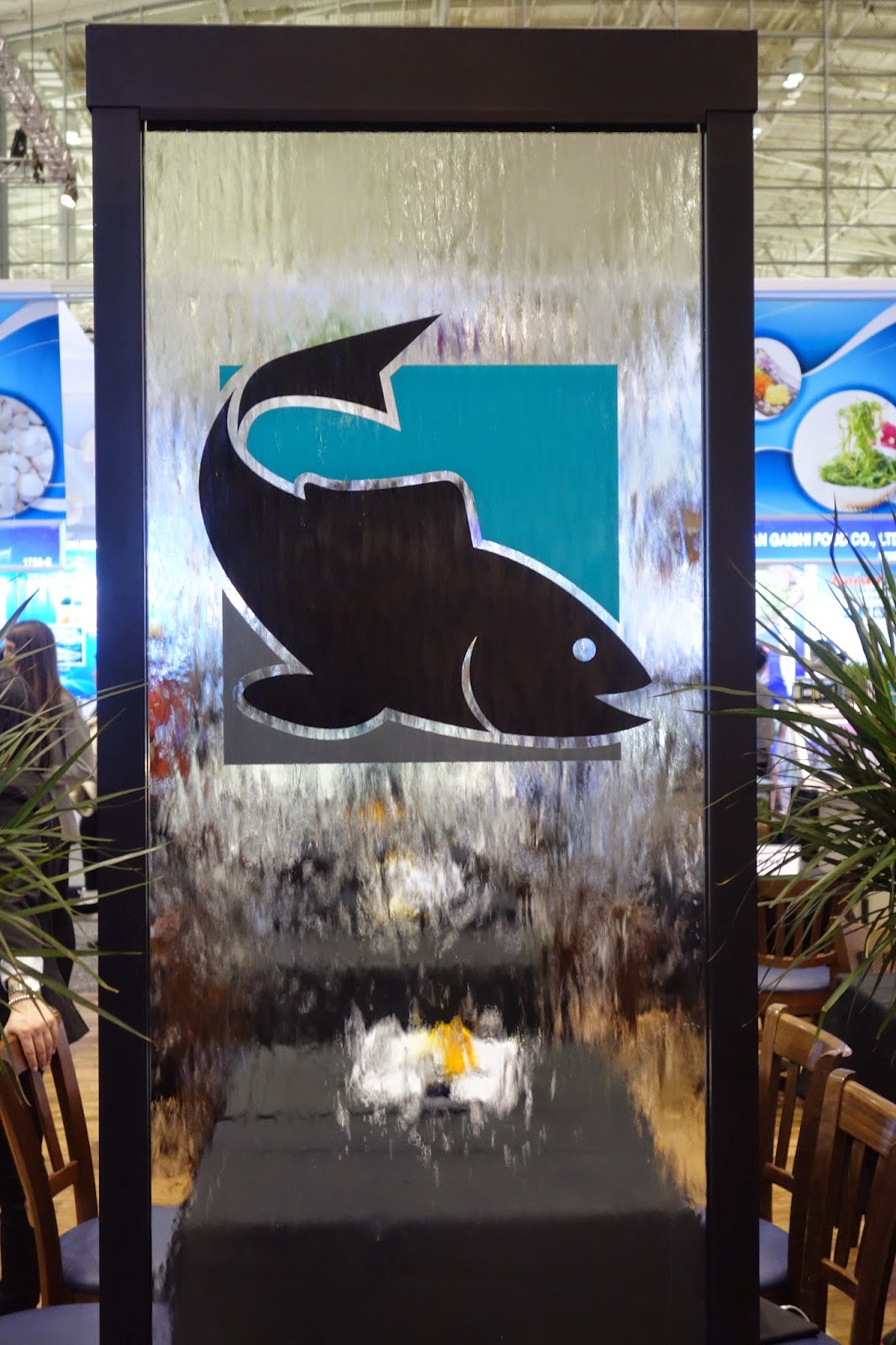 1. What is missing at most of the conference sessions at SENA is a difference of opinion. The panels often largely consist of like-minded individuals, so there is little disagreement or debate. We need more conflict on some of these panels, to present differing viewpoints and see how each side deals with that conflict. It would be beneficial to see how the panelists handle criticism of their positions, which could better point out the strengths and weaknesses of their points. Without such conflict, you are sometimes presented with a one-sided position, which potentially could be affected by bias. I'm sure such debates would be very popular at SENA. Sometimes, the Q&A after a panel session raises some conflict, but by then so much has already been presented without disagreement. Wouldn't you like to see a heated debate on the future of aquaculture or the sustainability of tuna? 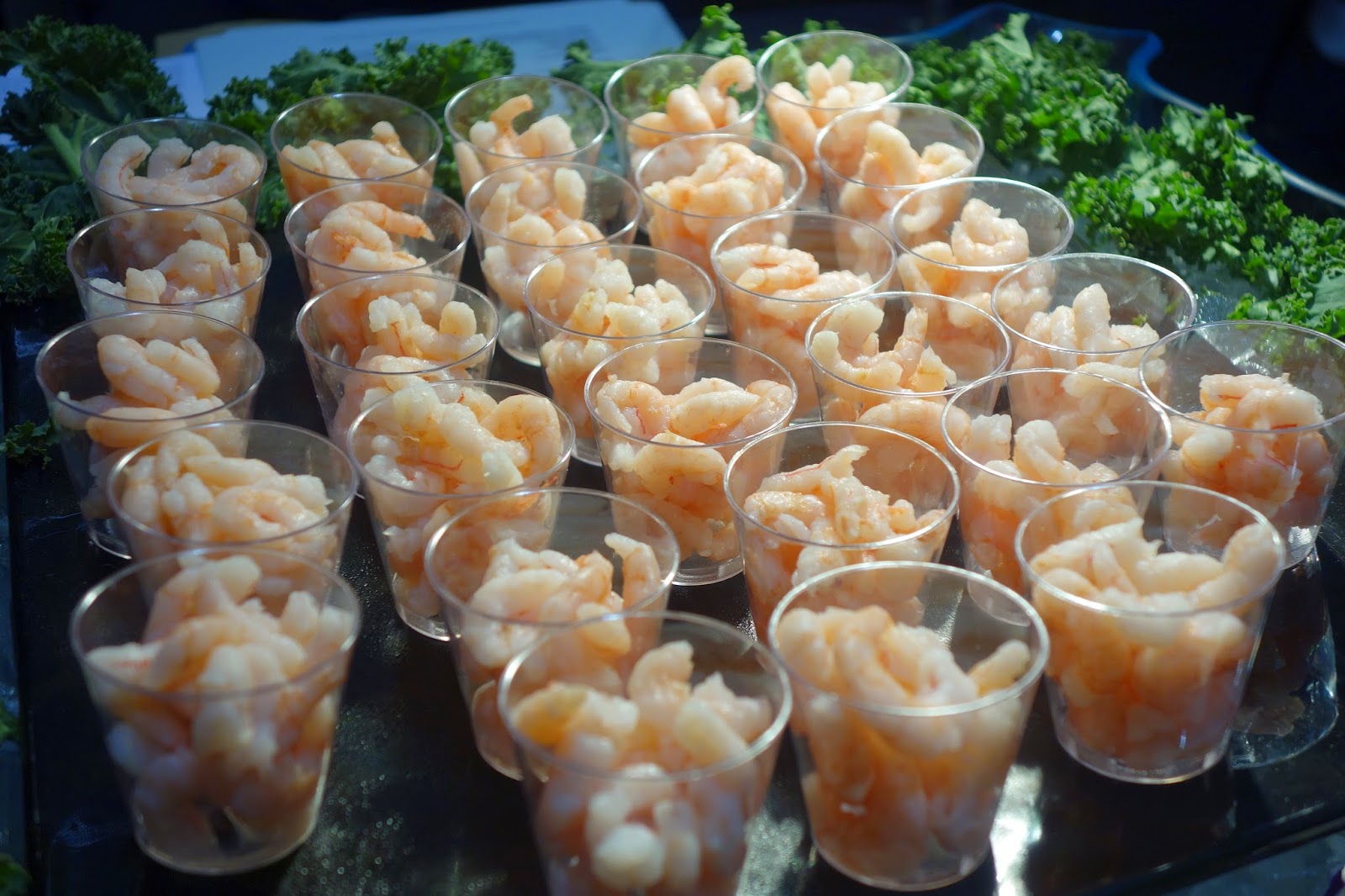 2.  I was once again disappointed to see that the two local newspapers, the Boston Globe and the Boston Herald, have each published but a single article about the Seafood Expo, and both concentrated on the same issue, the Presidential Task Force on IUU & Seafood Fraud. Sure, that was a worthy, international story but there are hundreds of other stories which could have been found at SENA. Why do these newspapers choose to ignore all of those other stories? They could have done an entire week of seafood-related stories. Locally, if you want stories about SENA, you have to seek out the passionate bloggers who have been covering the event for a number of years. They have written many dozens of stories about the Seafood Expo, doing a far better job than the local print media. More attention should be paid to these dedicated writers who are sharing the seafood stories of SENA. 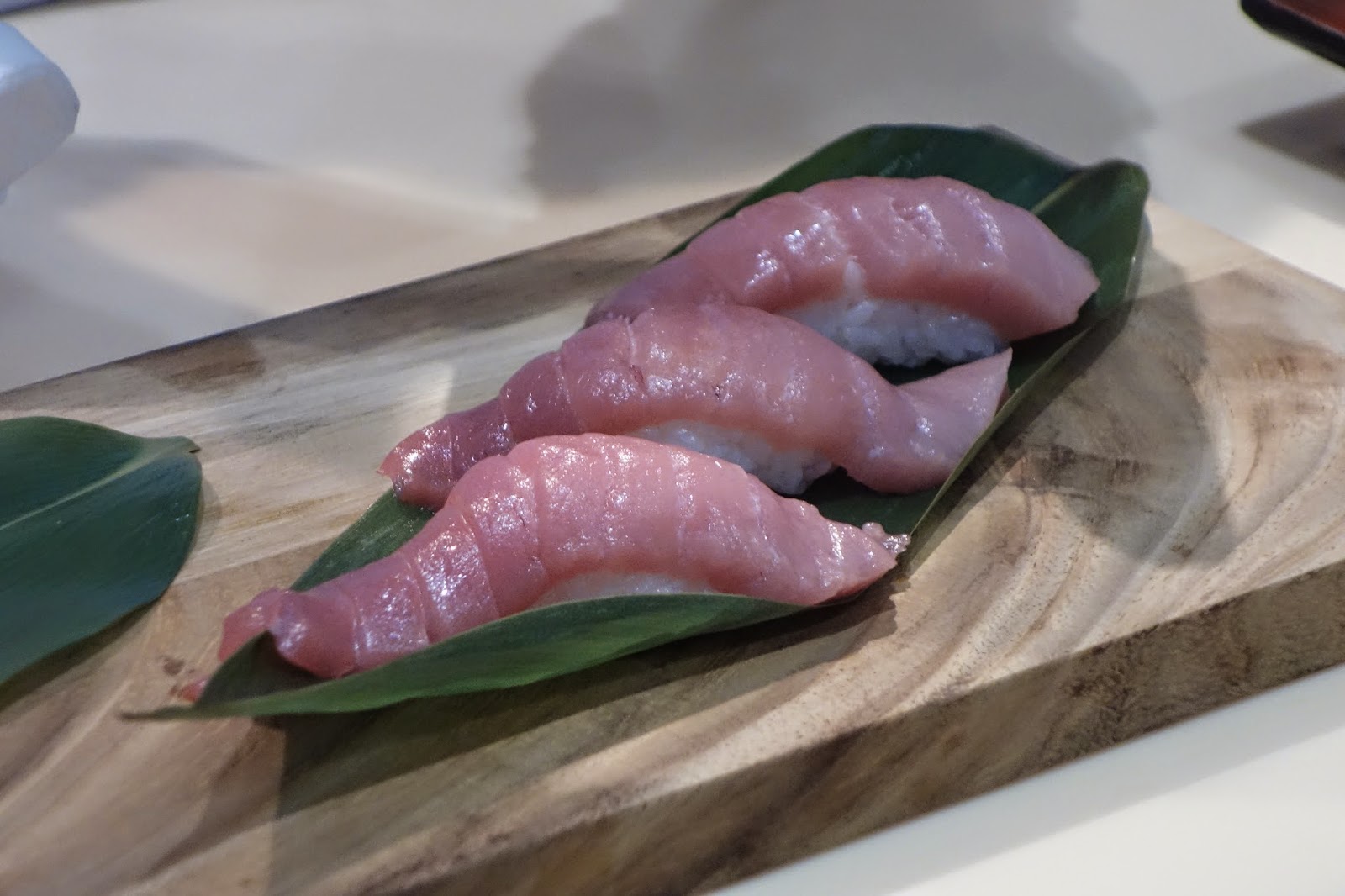 3. Sustainable Farmed Bluefin Tuna? That is the claim of True World Foods which presents their Kai Oh Maguro, the "King of Ocean Tuna." I've read about Japanese farmed Bluefin before, though I haven't explored it in the last couple years. From a recent, brief scan of some of the available information, it appears that changes have occurred in the industry in a quest to be sustainable. This is a topic I need to research further, to see what has changed in recent years. I tasted some of their farmed tuna at SENA and it was quite delicious, silky smooth and with a meaty texture. I'll be following up on this matter so you can look forward to a post in the near future. Bluefin Tuna is a hot button issue so this will be a fascinating matter. 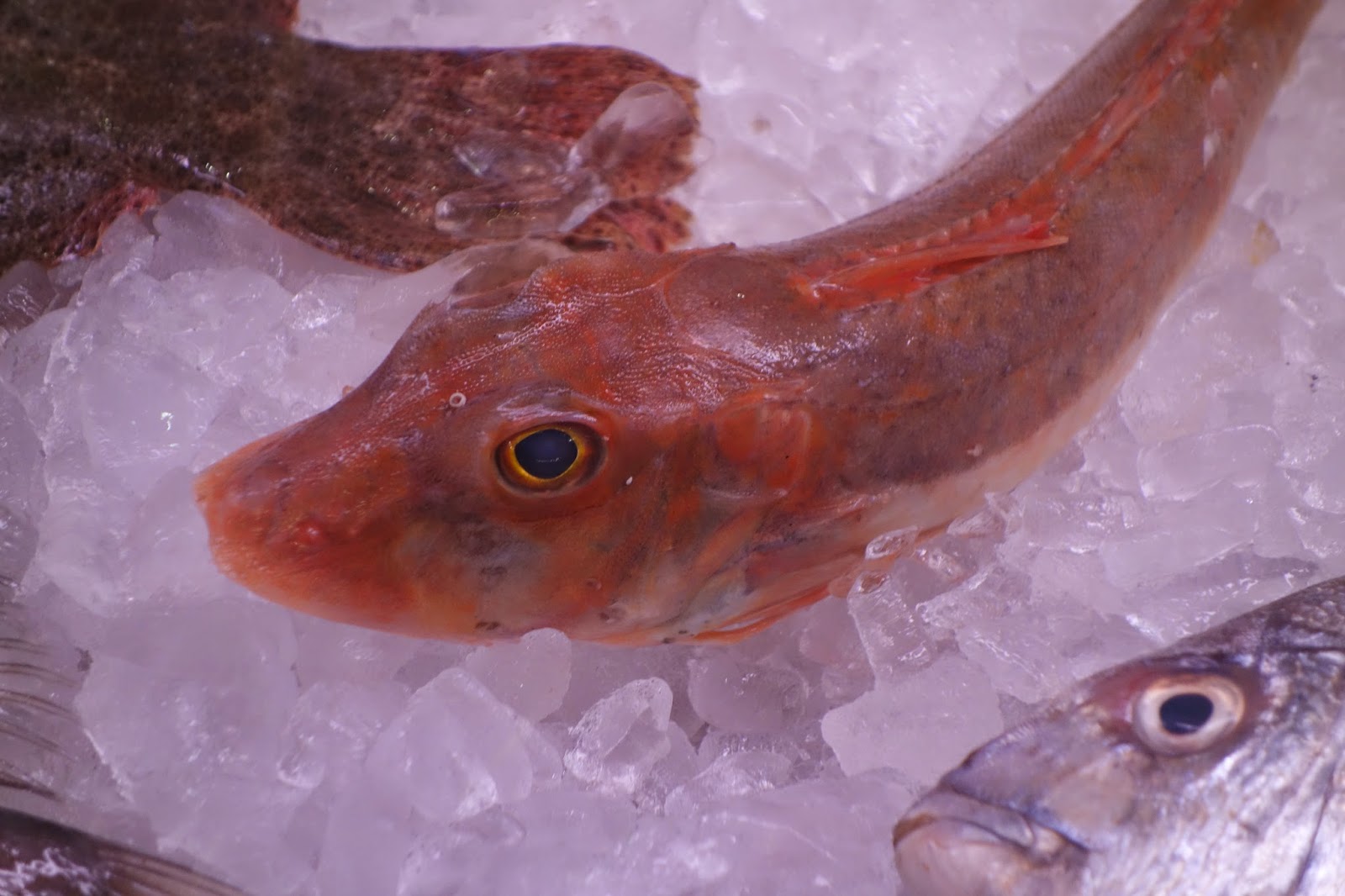 4. Located at the back of the main exhibition hall of SENA, you will find much of the seafood processing companies, and I think that section is largely ignored when many people seek seafood tales at the Expo. Many don't seem to realize the role processing plays in the seafood industry, such as how it interacts with sustainability and seafood fraud. Did you know that some seafood that is harvested in the U.S. is actually sent overseas to be processed before returning to the U.S.? Proper processing can provide more edible meat from seafood, increasing yields and helping sustainability. For example, a poorly processed fish might offer only 20 pounds of meat while more skilled processing could carve out 40 pounds of meat. More stories about seafood processing are needed, to explore how they affect the larger issues. 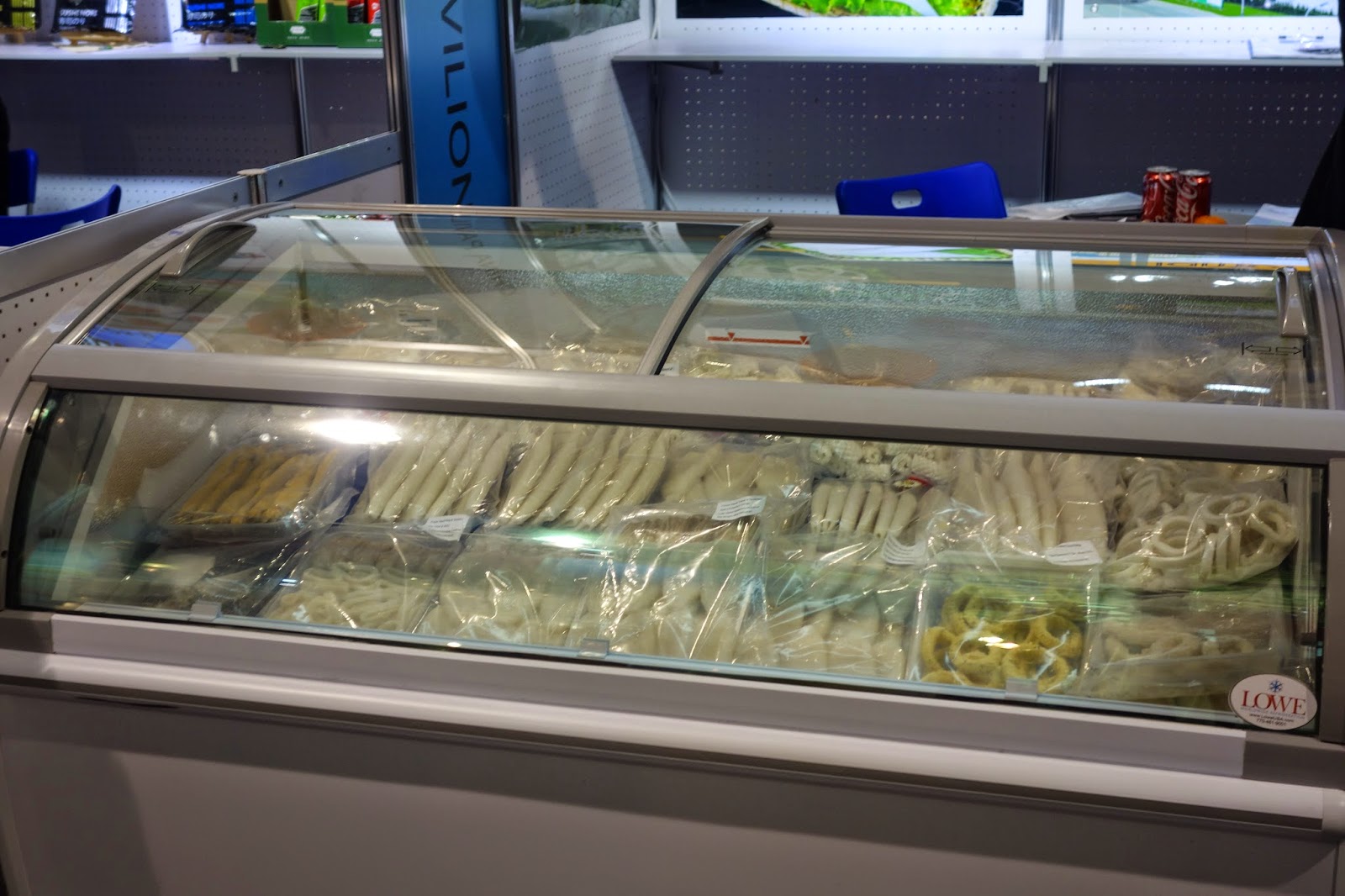 5. Does Asia favor frozen seafood far more than the rest of the world? At SENA, the majority of displays of frozen seafood seem to have been at the Asian booths. A number of Asian booths, such as the Japanese pavilion, sampled out some of their frozen products. At a seminar concerning mussels, it was noted that their fresh mussels were sold mainly in North American while their frozen mussels were sold primarily in Asia. I don't know the answer to this question, but what I found has made me curious to explore the matter further. If it is true, I would like to understand the reasons behind it. Is it a cultural matter? Or merely just a coincidence? 6. One of my favorite foods at SENA was a Kelp Smoothie, which was tasty and fruity, and mot anyone would have enjoyed too. You never would have known it contained Kelp. This year, there were 16 exhibitors of sea vegetables, 2 more than last year, so there has been growth in this area. However, I remain puzzled why seaweed and algae products don't receive more attention. I don't recall any recent conference sessions that deal with them, and I don't think there was ever a Master Class on seaweed. The Asian booths seem to most often showcase seaweed and algae products, especially laver snacks. It is sustainable and nutritious, and land-based vegetables are extremely popular, so why don't sea veggies get enough respect? I want to know. 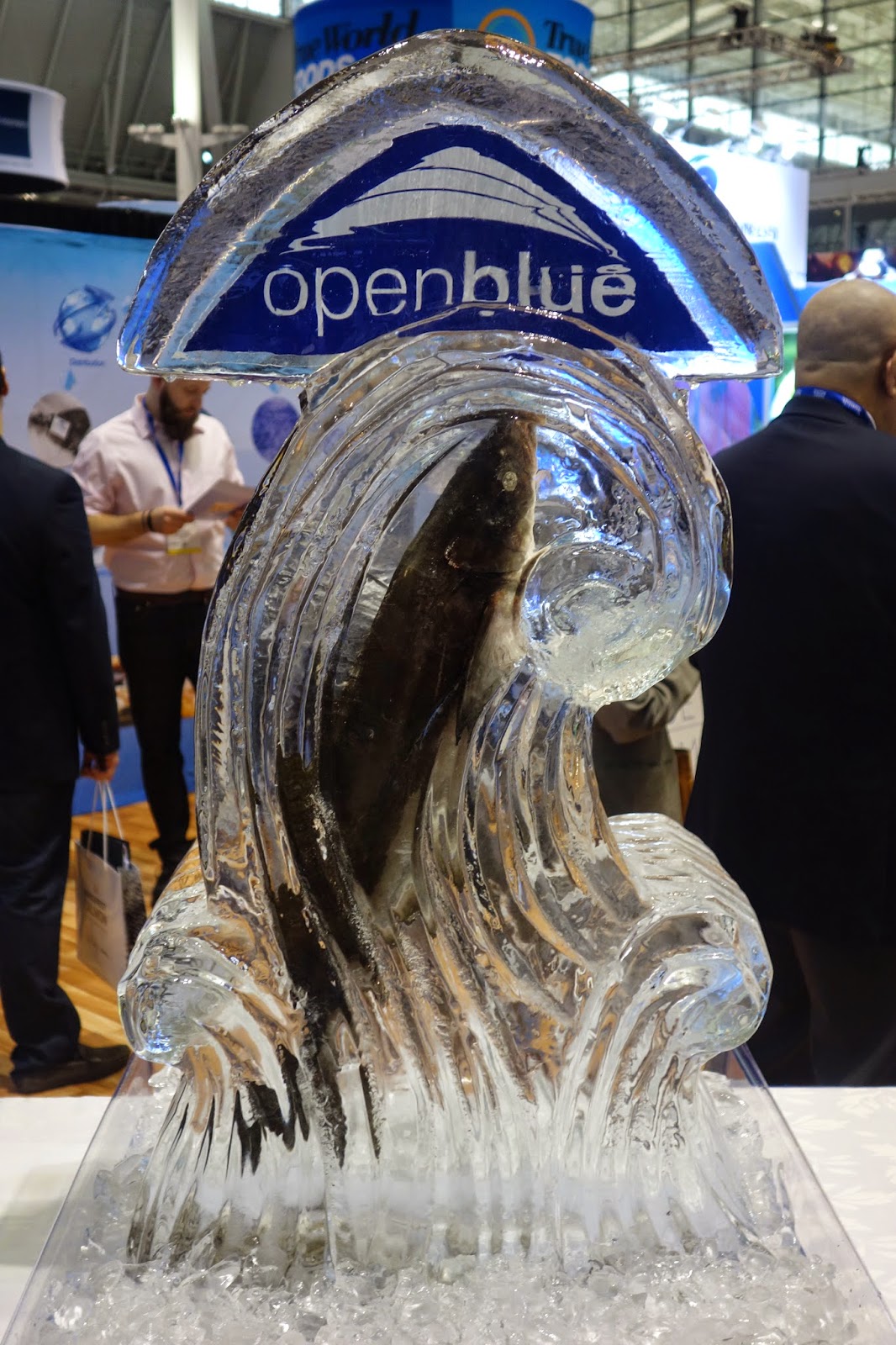