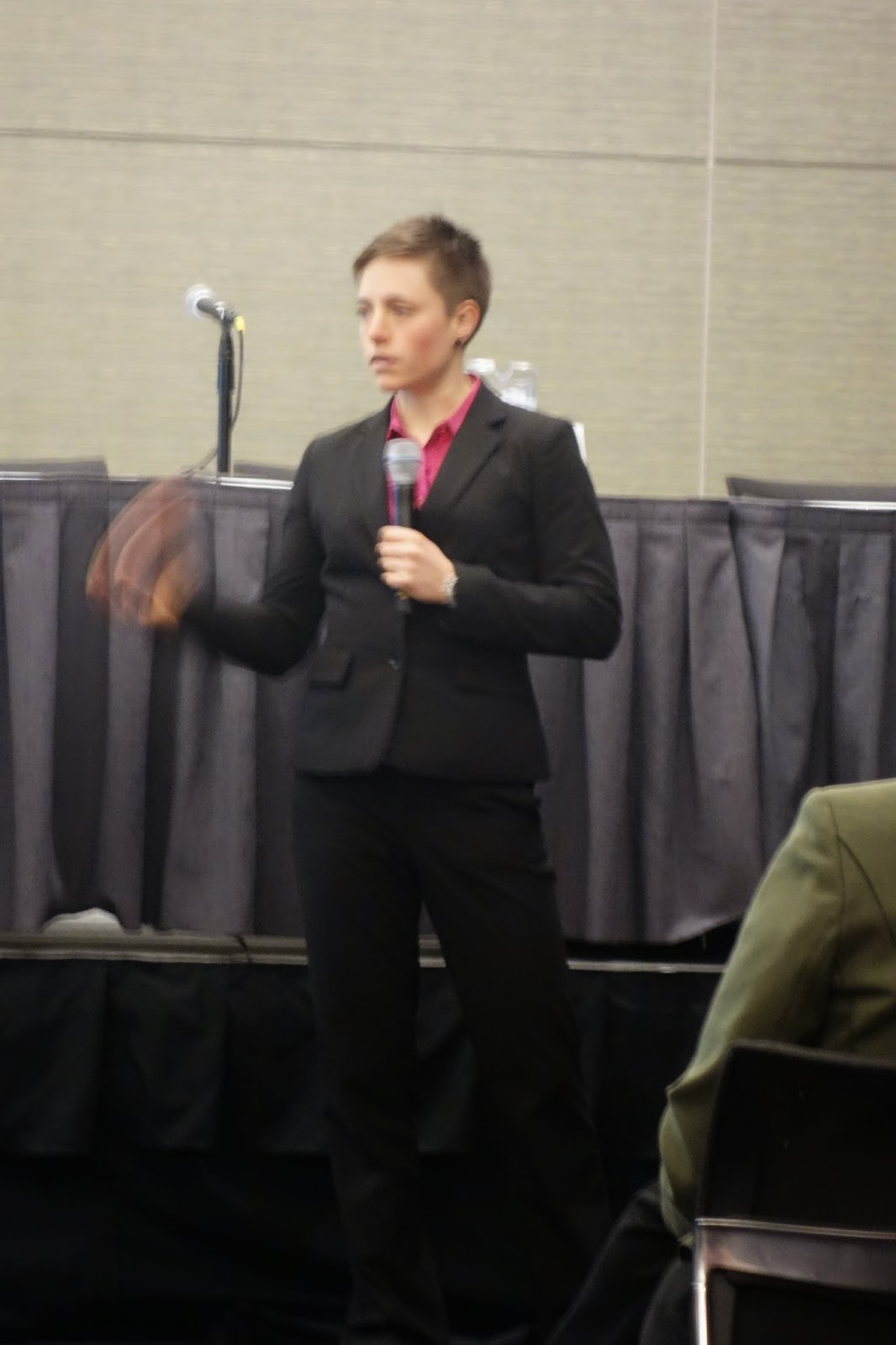 Why don't consumers purchase more seafood when shopping for food? Americans don't eat enough seafood and we have seen consumption decrease over the last 6 to 7 years. From my own prior experiences and research, two important reasons stand out for why consumers often choose not to purchase seafood: Cost and difficulty of preparation. These reasons may not be fully valid, but it is the perception of the consumer which is key. If they think seafood is too difficult to cook or too expensive, then they are less likely to buy it, even if, in actuality, it is easy to prepare or inexpensive.

As I encourage consumers to purchase and consume more seafood, I was especially interested in attending a special session at the Seafood Expo North Amrtica (SENA) called Understanding the Seafood Retail Consumer. This session provided a summary of a market study, What are American Seafood Retail Consumers' Purchasing Habits?, conducted by SeafoodSource.com which can be purchased online for $495. The summary of the report was given by Kerry Gross (pictured above), a Market Analyst with SeafoodSource.

The inspiration for this study originated with the reality of increased protein prices and the question of how seafood stacked up against these other proteins. In addition, the study was designed to determine how consumers plan and shop for dinner. That all sounds interesting, especially the latter elements. About 500 people were selected for the study, a group representative of the U.S. census, In addition, they only targeted people who bought seafood at least once a month.

I would have liked to see a larger group surveyed, to obtain a larger input of responses, and I also would have preferred if the group was divided by financial level. It is well settled that the cost of seafood is an impediment to many people purchasing seafood, so it would be beneficial to see how differing income levels address the matter of the cost of seafood, especially when considering their shopping practices.

However, the study was limited in another manner, and that limitation is not mentioned in the description of the study on the Seafood Source website. It's a significant omission which could be very important to the potential customers for the study. The limitation is that the study only dealt with fresh fish, and didn't address frozen fish. As such, any purveyors of frozen fish are likely to get a far more limited value, if any, from this study. The description of the study should have included that limitation as not everyone would be willing to pay for the study, especially as it might not address the type of seafood they sell. 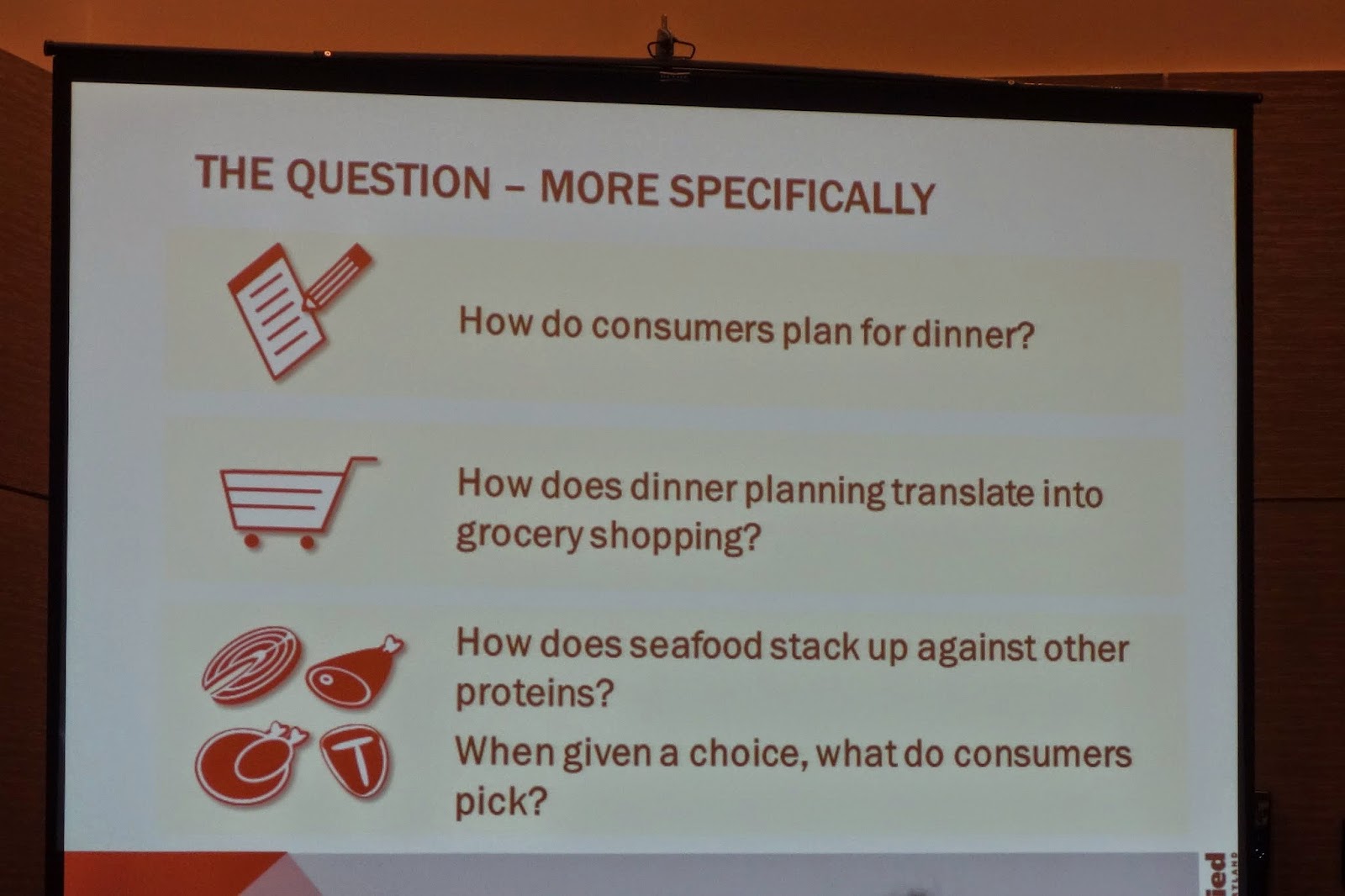 The summary began by noting that in the survey, the average person cooks 5.3 meals at home each week, broken down by poultry 1.9 times, beef. 1.5 times, seafood 1 time, and pork .9 times. It is surprising that people seem to consume more seafood than pork, In addition, 2/3 of people plan what they will have for dinner on that day. They obviously are not thinking far ahead about what to prepare for the week. About 63% of people plan their dinner while they are home, 18% do so at work, 10% at the store itself and 9% on the go. Of those people, 29% include their partners in the planning and 13% include their children too (with a note that half the people in the study had children). All fascinating tidbits.


When Americans go shopping, an astonishing 71% of people purchase a week's worth of groceries at a time. That plays a large role in the type of foods they buy, and has direct relevance on the purchase of fresh fish. In this situation, it is far more likely that consumers will buy frozen fish than fresh fish, as they want food they will last the week. Thus, the fact the study ignored frozen fish seems to be problematic. I think they would have arrived at some very different conclusions if the survey had included frozen seafood.

Before they get to the supermarket, 59% of people are pretty sure what proteins they will buy at the store while 32% have a general idea and 10% decide once they get to the store. It is also important to know that 57% of people change their mind on the protein purchase at least once a month. Why do they change their mind? The study does not address that issue, though I suspect it may be financially driven, if they see a sale on a protein at the store. In addition, other special circumstances may have intervened, such as a food demo. 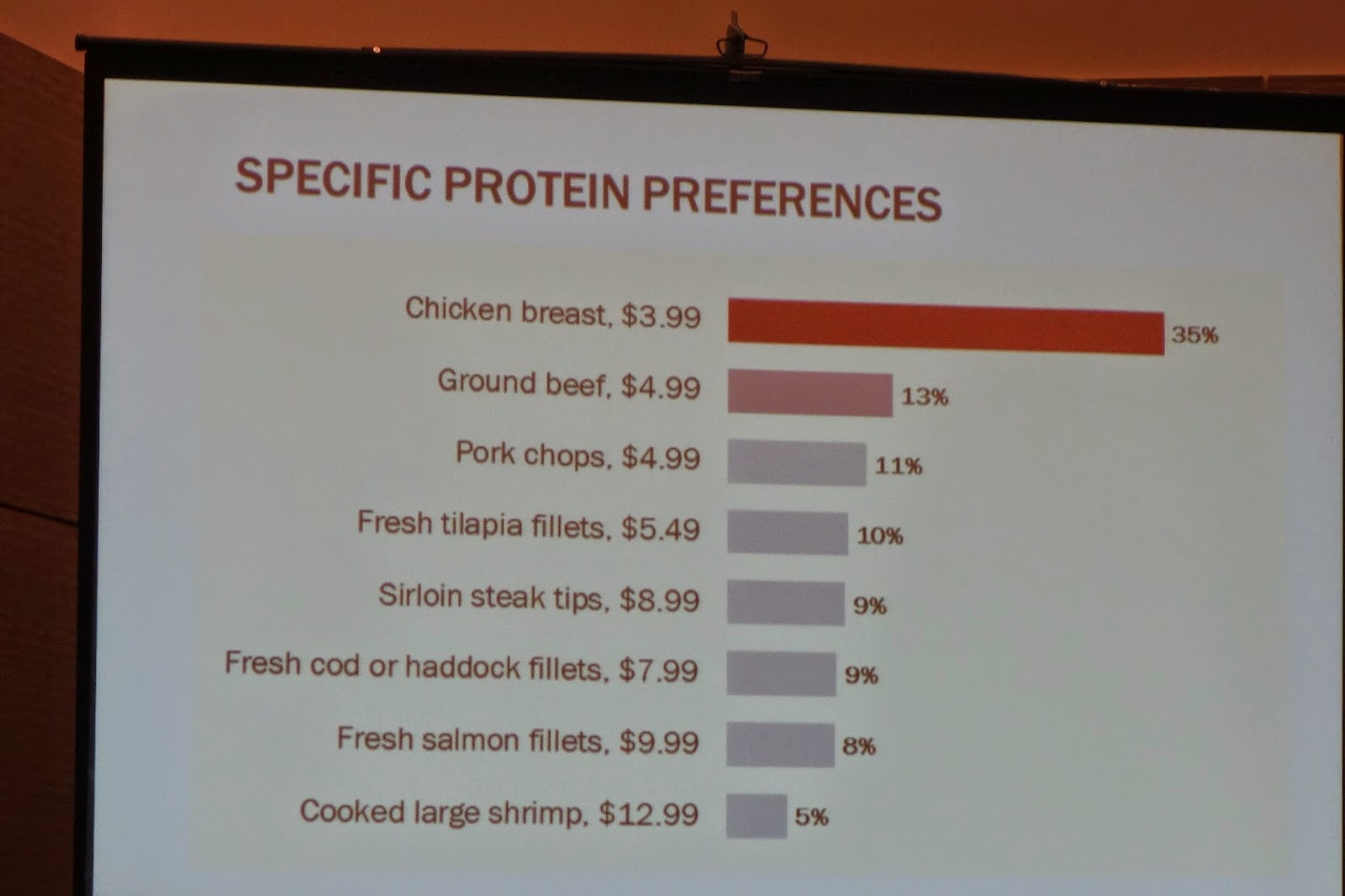 The survey next addressed dinner time decision drivers, breaking it down into Primary, Secondary and Niche Concerns. The two Primary drivers included Household Eating Preference (75%) and Cost (72%).. The two Secondary drivers included Ease of Prep (69%) and Nutritional Value (58%). The Niche Concerns included Ability For Leftovers (39%), Side Dishes (38%) and Natural/Sustainable (28%). I note that Cost and Ease of Prep are only separated by 3%, which too me seems like a relatively minor difference and I would have placed Ease of Prep in the Primary Concerns, especially based on my own prior study,

They then assessed Specific Protein Preferences by comparing the survey results of selections of 8 different proteins,from chicken breasts to cooked large shrimp. As can we seen, the list does not include frozen seafood, which could have significantly altered the results. We also see that only one non-seafood protein cost more than any of the seafood items. It would have been more interesting to see some other higher priced proteins on this list. I also would have liked to see some seafoods at a lower price point, noting that they were sale prices. In addition, it is likely that the preferences may have changed if the survey was broken down by income levels. This is the section of the survey which I feel is the least effective. The choices given to the survey participants were far too limited.

The survey led them to the conclusion that the key decision drivers for the purchase of seafood in include nutritional content and natural/sustainable, while the weaknesses include cost and ability for leftovers. This seems to largely ignore the fact that ease of prep is often cited by consumers as a primary reason why they don't purchase seafood to cook at home. As I mentioned above, it received a significant enough percentage that I believe it should have been considered a Primary concern. 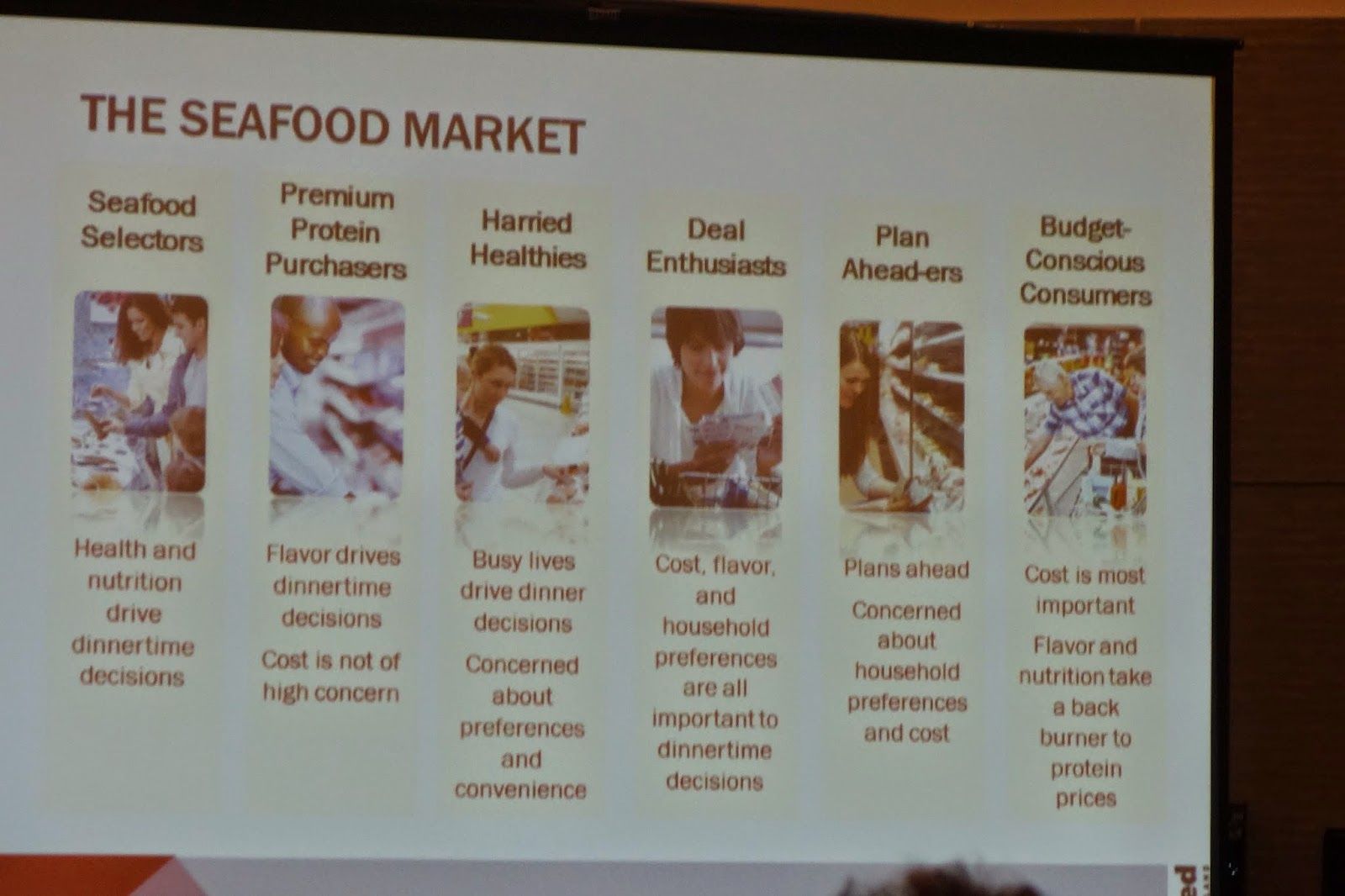 The summary of the survey ended by noting their Market Segmentation based on the responses to the protein preferences; and they broken it down into 6 groups. The groups include Seafood Selectors, Premium Protein Purchasers, Harried Healthies, Deal Enthusiasts, Plan Aheaders, and Budget Conscious Consumers. They are listed in descending order of seafood preference. Marketers do love to break consumers down into easily digestible segments, whether it is truly fitting or not. At best, these segments only apply to fresh fish, not frozen fish. In addition, the groups might have been different if the number and type of Specific Protein Preferences were different.

In a previous article I wrote about consumer buying behavior,  based on information from Buyology: Truth and Lies About Why We Buy, by Martin Lindstrom. I wrote, "But now we know that roughly 90% of our consumer buying behavior is unconscious,…” (p.195) This might be disturbiung to some. “But like it or not, all of us consistently engage in behavior for which we have no logical or clear-cut explanation.” (p.19) Our decisions are far from as rational as we believe them to be and “…our irrational minds, flooded with cultural biases rooted in our tradition, upbringing, and a whole lot of other subconscious factors, assert a powerful but hidden influence over the choices we make.” (p.18)

Seafood purchasing behavior is not always rational, and consumers don't often understand why they buy what they buy. Trying to label them as a specific marketing segment is not that beneficial as there is much outside that segment which has an effect on purchasing decisions.

Overall, I found some value in the initial survey results, on the shopping decisions and planning, but far less value once the protein preferences were considered. The omission of frozen fish also lowers the value of the survey, and that omission should have been noted on the Seafood Source site as a caveat for anyone considering buying the report.

In the end, I continue to urge people to eat more seafood, especially local and sustainable.
Posted by Richard Auffrey at 3:00 AM