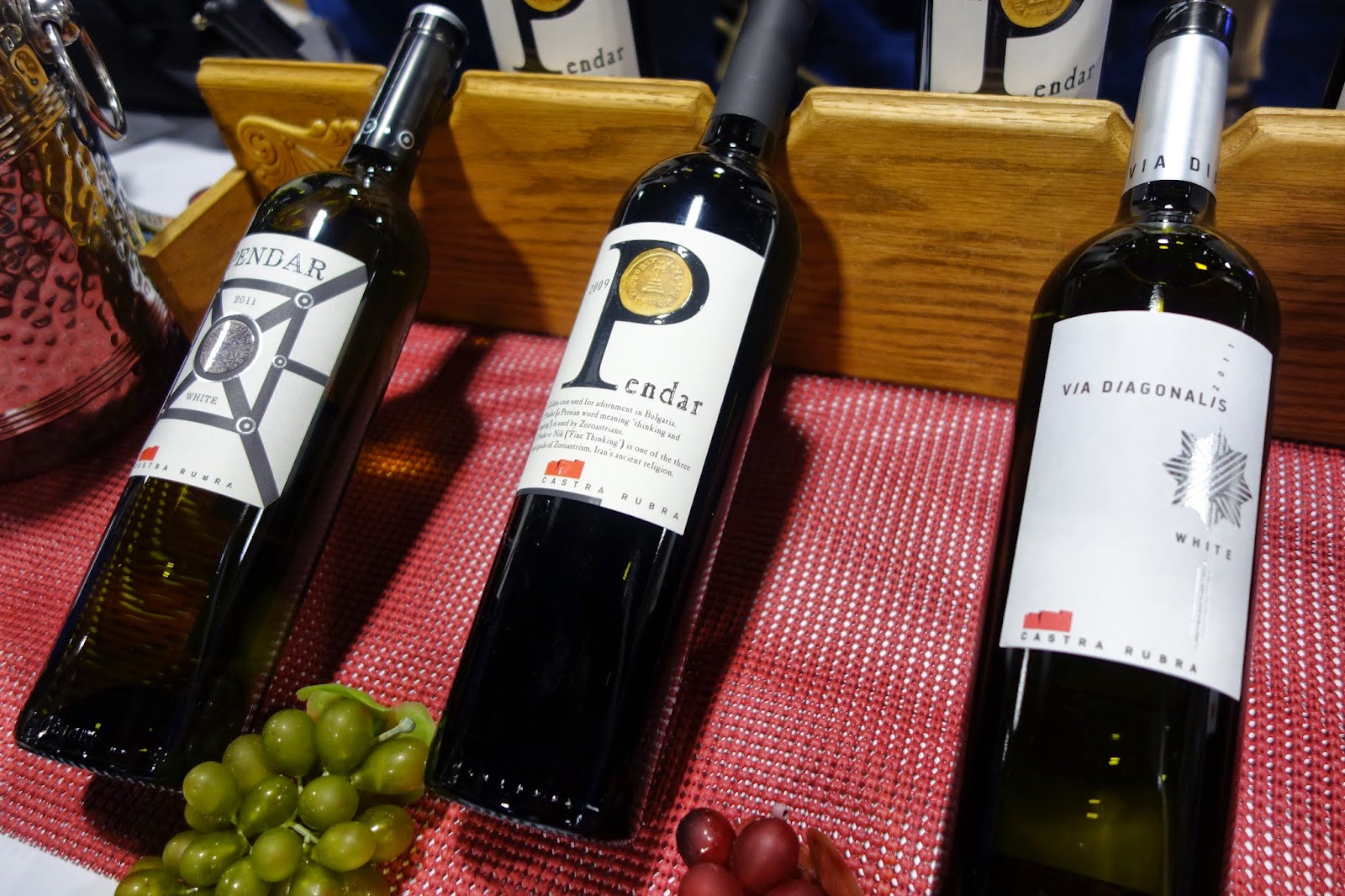 Prior to the Boston Wine Expo, I'd done some research into the wine exhibitors at the Expo and found there would be a table of Bulgarian wines. I have very little experience with these wines so was excited to stop by their booth and try their wines. The wines, all from the Castra Rubra Winery in the Thracian valley, are imported by Bottles & Barrels Ltd. and are currently available in Massachusetts. I don't know any specific wine stores that carry these wines, but I recommend you keep an eye out for them.

Wine making in Bulgaria has an ancient history, extending back at least a few thousand years to the Thracians. Interestingly, during the 1980s, Bulgaria was the second largest wine producer in the world but that fell apart with the collapse of communism. In recent years, the wine industry has been rebounding, and the quality of their wines has been improving. As such, you may soon start seeing more Bulgarian wines on store shelves and restaurant lists.

The Castra Rubra Winery extends back only to 2004 when they started planted vines in the Thracian Valley.Construction on their winery began in 2006 and their first wines were released from the 2007 vintage."Castra Rubra" is Latin and translates as "red fortress" and refers to an actual fortress that was discovered by archaeologists in 2007. The fortress was located on the Via Diagonalis, which once connected Rome to Constantinople.

Presently, the winery has about 200 hectares of vineyards, growing two indigenous grapes, Rubin and Mavrud, as well as some international varieties including Cabernet Sauvignon, Merlot, Alicante Bouschet, Sangiovese, Pinot Noir, Cabernet Franc, Sauvignon Gris, Sauvignon Blanc, Grenache Blanc, Syrah, and Petit Verdot. Their winemaker and executive consultant is Michel Rolland, and they also have two oenologists, Plamena Kostova and Anton Dimitrov. I had the opportunity to taste six of their wines and overall I enjoyed them. I would have liked to see more use of their indigenous grapes, to gain a better sense of Bulgaria itself and its lengthy vinous history. 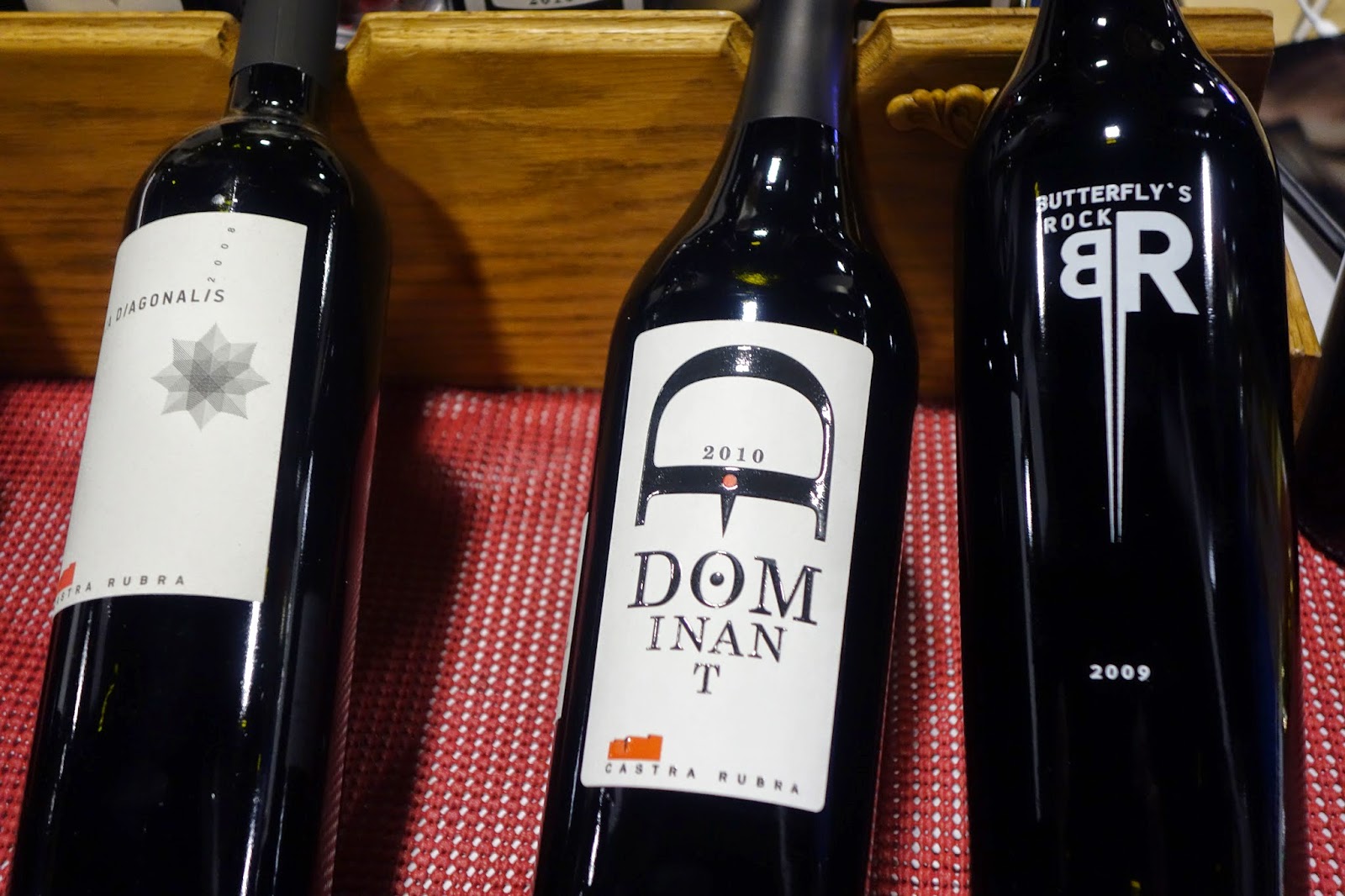 I began the tasting with the 2011 Pendar Sauvignon Blanc (about $12), which is made from 100% Sauvignon Blanc. "Pendar" refers to a "coin" and you'll find one on their label. The wine was crisp and clean, with a mild grapefruit flavor and added citrus notes. There was some underlying minerality and it was a pleasant wine, one that would appeal to many wine drinkers. The second white wine was the 2011 Via Diagonalis (about $15), which is a blend of Sauvignon Blanc, Grenache Blanc, Sauvignon Gris, and Chardonnay. This was an intriguing wine with a complex blend of peach and pear flavors, with herbal accents and some minerality. It was crisp and dry, with a very satisfying finish. At this price point, I would highly recommend this wine as it presents something more unique and tasty.

The 2009 Pendar Red (about $12) is an interesting blend of 55% Rubin and 45% Merlot. Rubin is an indigenous grape, a cross between Syrah and Nebbiolo. This wine spends about 8 months in new French oak and has an ABV of 14%. With lots of red fruit aromas and flavors, there was additional complexity with spice notes and hints of earthiness. The tannins were noticeable but restrained and there was a nice, spicy kick on the finish. This is an easy drinking wine with character, which could be enjoyed on its own though pairing it with food might be a better option. Highly recommended.

The final wine was the 2009 Butterfly's Rock (about $30) is a Bordeaux-style wine, a blend of 50% Merlot 50%, 25% Cabernet Sauvignon, 15% Cabernet Franc and 10% Syrah. This wine spends about 24 months in new French oak and has an ABV of 14.5%. This is a silky and elegant wine, with deep, ripe black fruit flavors, a spicy backbone and well-integrated tannins. It tends to be more Old World in style, and is complex, well balanced and delicious. This wine should probably be decanted before drinking, and should age well. Highly recommended.
Posted by Richard Auffrey at 2:38 PM