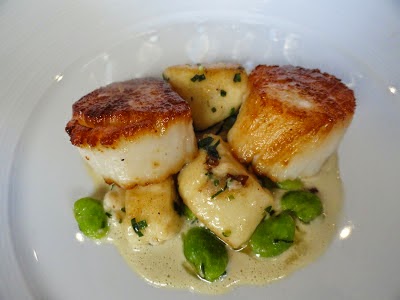 If you watch Hell's Kitchen, you know that every season, at least a few chefs have difficulty searing scallops properly, leading Chef Gordon Ramsay to belittle them for their failure. Many people say scallops are actually one of the easiest seafoods to cook, so why do experienced chefs seem to have so much trouble? I'm sure it is due more to the great stress these chefs are under, than a matter of their skill. They are rushing to prepare their dishes, worried about how Ramsay will react, and that stress can overwhelm their actual skill.

Unfortunately, it has given some people the false impression that cooking scallops is difficult. Even if they enjoy the taste of scallops, these people tend only to order them at restaurants than try to cook them at home. They need to sweep away their fears, and learn that cooking with scallops is far easier than they believe. Without the stress of cooking for Ramsay, any home cook can prepare a delicious scallop dish.

In addition, consumers need to learn that not all scallops taste the same. Their taste depends on how the scallops are handled by the fishermen, as well as the location where the scallops are harvested, their merroir. Consumers may have wondered why the scallops they enjoyed at restaurants sometimes tasted differently than other times. There are valid reasons for those differences.

While attending the Seafood Expo North America (SENA), I spent some time conversing with Togue Brawn, the owner of Maine Dayboat Scallops. Togue, who has a Master of Science in Marine Policy started working, in 2007, at the Maine Department of Marine Resources as a Resource Management Coordinator. She spent much time and effort assisting the scallop fishery, trying to make it more sustainable and to get fishermen more money for their scallop harvests. Last month, I wrote about some of the measures that helped to rebound the Maine scallop industry. Togue mentioned she helped institute the measures, such as limiting the entry for others to join the fishery, cutting the harvesting season from 132 days to 70, and closing about 20% of the waters.

In Maine, the lobster industry dominates and the much smaller scallop industry gets much less attention. If the lobster industry ever plummets, Maine will need a back-up. While managing the scallop fishery, Togue was frustrated how the price for the Maine fishermen was being set by the federal scallop fishery. She felt that there had to be a better way, In addition, she was realizing the uniqueness of Maine scallops, especially compared to many of the trip boat scallops, and felt that no one was doing anything to differentiate Maine scallops from all the others. Togue decided to leave the Department of Marine Resources and dedicate herself to helping the Maine scallop fishermen.

I admire the passion I saw within Togue, her desire to elevate the Maine scallop, and to help the local fishing community. Togue formed Maine Dayboat Scallops to act as a middleman between the fishermen and those who wanted to purchase scallops. And those fishermen's pries were no longer set by the federal fishery, allowing them to get a better price for their scallops. It would also act to set Maine scallops apart from all of the other scallops out there. They would become their own unique brand.

New Bedford is the center of the scallop industry, landing about 50 million pounds and constituting about 90% of all scallop landings in the U.S. In Maine, they only harvest 425K-600K pounds of scallops, so you can see it is only a tiny percentage of the U.S. total. At best, Maine may eventually land about 1 million pounds, which is still relatively small. The vast majority of the non-Maine scallops are landed by large boats which remain at sea for days on end. In general, they store their scallops in cloth bags buried in ice. Those scallops often absorb water and possibly chemicals from the ice. The water dilutes the taste and quality of those scallops.

The boats which land Maine scallops are true day boats, collected  scallops in 5 gallon buckets and never storing them on ice. They are fresher and haven't absorbed excess water, and this makes them taste better. Through her company, Togue is able to sell Maine scallops soon after they come in on the boats, and she ships them nationwide, selling many in New York. In general, these Maine scallops sell for $24-$30 a pound, and are about $22 per pound wholesale.

After tasting some scallops from New Hampshire, Togue realized they just didn't taste the same as those from Maine. She began to realize that scallops possess merroir, that the location where the scallops are harvested makes a difference to their taste. There are 15-16 different ocean regions in Maine, and Togue hasn't yet done an extended examination of the merroir of all of these different areas, but she can speak on a few of them. For example, scallops from Casco Bay tend to be denser and more intense in flavor while those from Cobscook Bay tended to be softer, sweeter and more subtly flavored.

Togue admits that her work is still relatively new and there is much still to do. It will take time and effort to help showcase the unique differences of Maine scallops, to make the public aware of the reasons why Maine scallops taste different from scallops harvested elsewhere. With her deep passion, I'm confident Togue is going to accomplish her goals.
Posted by Richard Auffrey at 4:00 AM