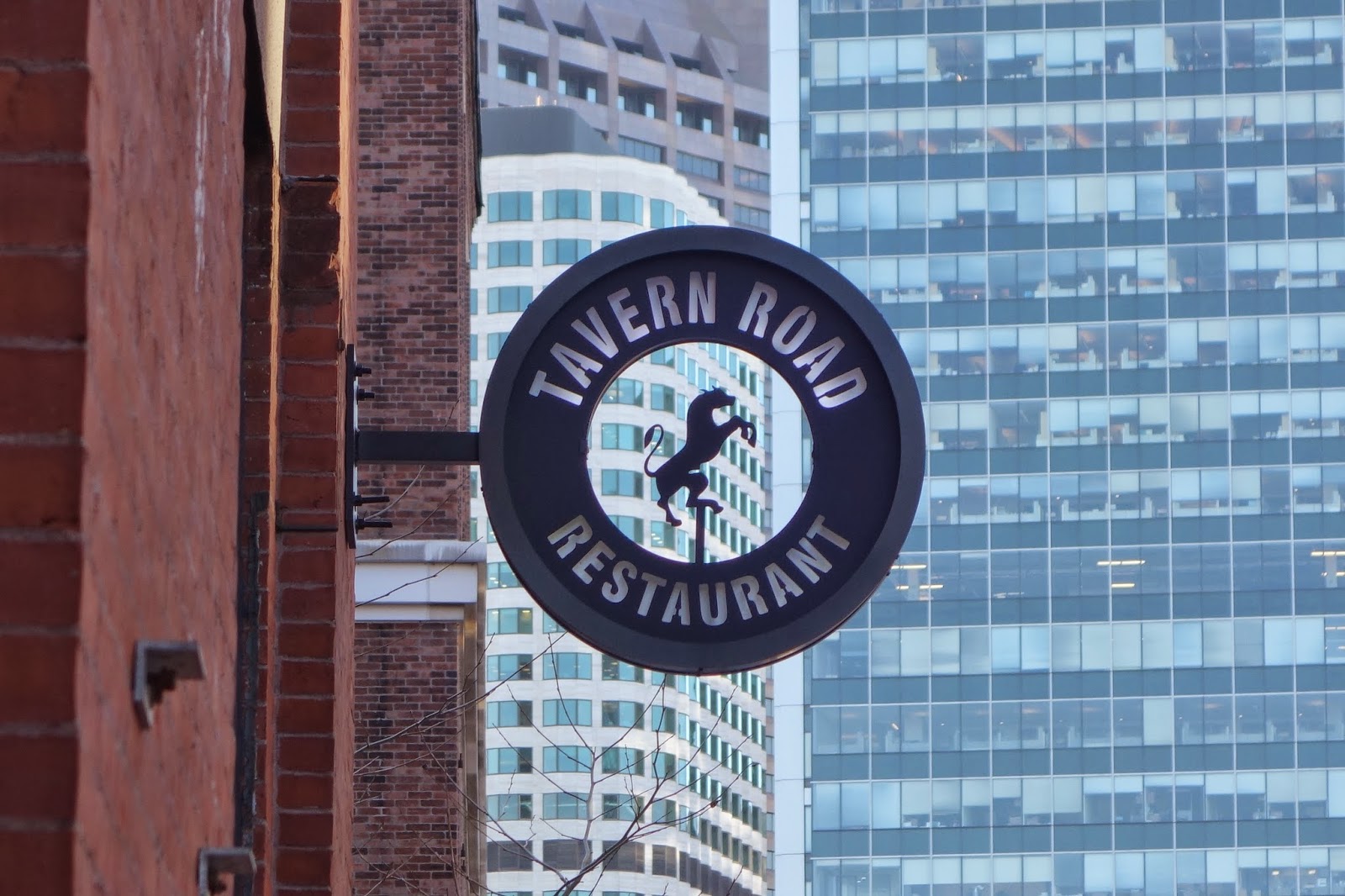 It's been a voyage around the world of lamb lately. Icelandic lamb, Australian lamb and American lamb. As a lamb lover, this sampling has been a culinary voyage of great delight. However, I know some people who dislike lamb, who think it tastes too gamey, and won't ever order it at a restaurant or cook it at home. I'm sure though they would enjoy lamb if it were prepared differently from what they've tasted before. Lamb is a versatile meat and can be showcased in so many, many ways. You merely need to be open to trying something new.

Recently, the American Lamb Board hosted a media lunch at Tavern Road where Chef Louis Dibiccari prepared us a four-course lamb meal. Lisa and Phillip Webster, owners of North Star Sheep Farm in Windham, Maine, provided the lamb and Lisa also gave a short talk about lamb and her farm. Richard Doucette, the in-house butcher at Tavern Road, gave a butchery demo while Lisa gave her talk. In addition, Formaggio Kitchen served several sheep's milk cheeses prior to our lunch and 90+ Cellars provided four wines for the lunch.

The American Lamb Board "is an industry-funded research and promotions commodity board that represents all sectors of the American Lamb industry including producers, feeders, seed stock producers and processors. The Board, appointed by the Secretary of Agriculture, is focused on increasing demand by promoting the freshness, flavor, nutritional benefits, and culinary versatility of American Lamb." They will also be hosting the Lamb Jamb next month, where 20 New England chefs will compete, trying to create the best lamb dish. 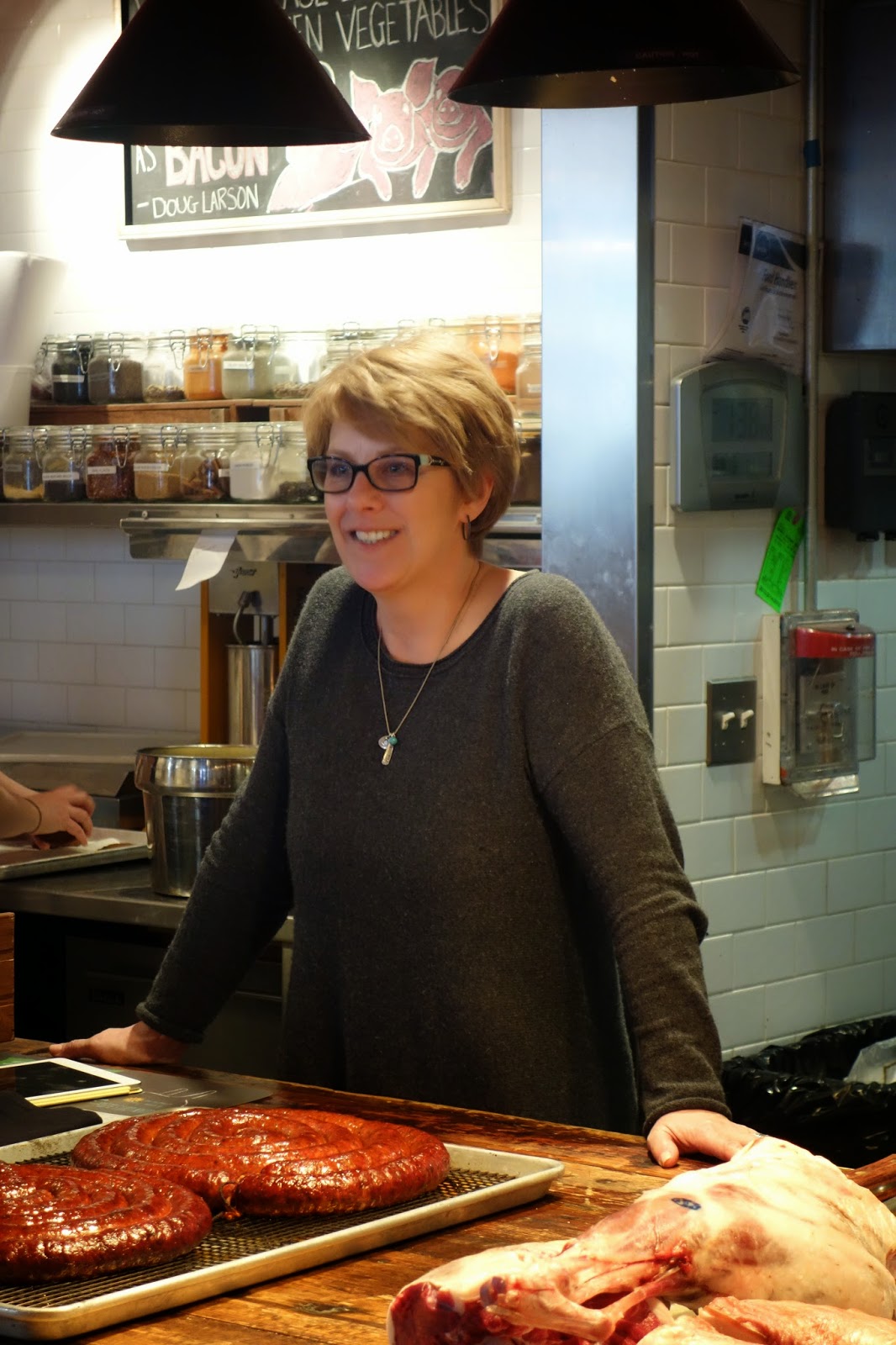 Above is Lisa Webster of North Star Sheep Farm, which has been in operation since 1997 though their families have been involved in raising sheep for over 100 years. Lisa and Phillip actually became sheep farmers in Maine around 1984, and then in 1997, they bought the 225-acre Stevens Farm in Windham. They raise several thousand sheep, all of which are pasture raised on certified organic grass. They do not use an antibiotic or hormones on the sheep, and if any sheep actually needs antibiotics, it is automatically removed from the meat program. They are passionate about sustainable farming, and are an Animal Welfare Approved farm. They believe in whole lamb sales so nothing goes to waste. They also offer some Lamb Recipes on their website.

For more info, in Lisa's own words, please watch the two videos below.

This is Part 1 of a video with some opening remarks by Chef Louis Dibiccari. After his comments, then Lisa Webster gives a talk about lamb and her farm while Richard Doucette butchers a lamb.

This is Part 2 of a video with more information from Lisa Webster and Richard Doucette comtinues to butcher the lamb. There is lots of valuable information in this video, and it is also quite cool to see the lamb be rendered down into trays of appealing meat. 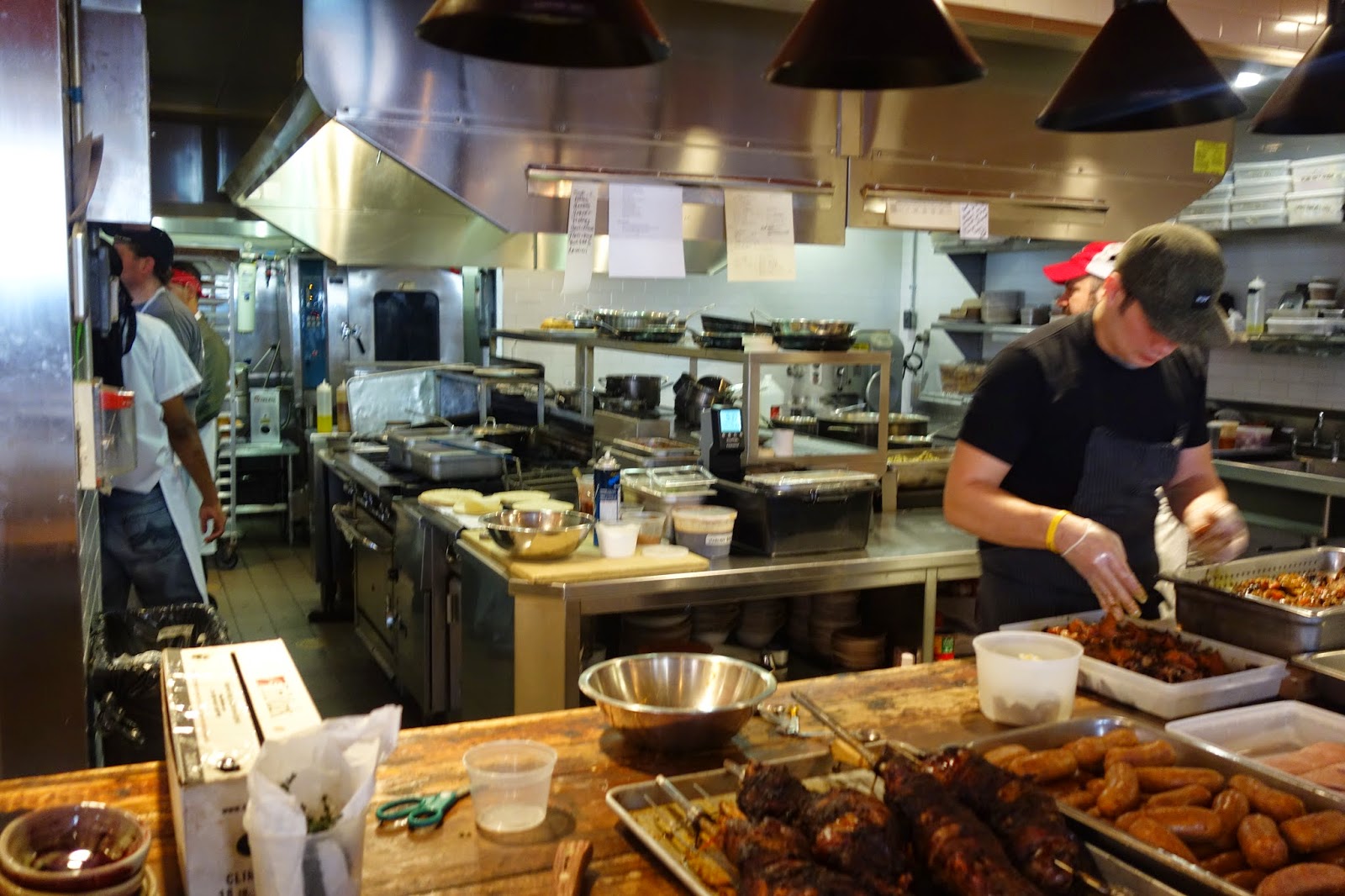 The open kitchen at Tavern Road. The wooden counter at the front was specifically built so that it could be used for butchery. 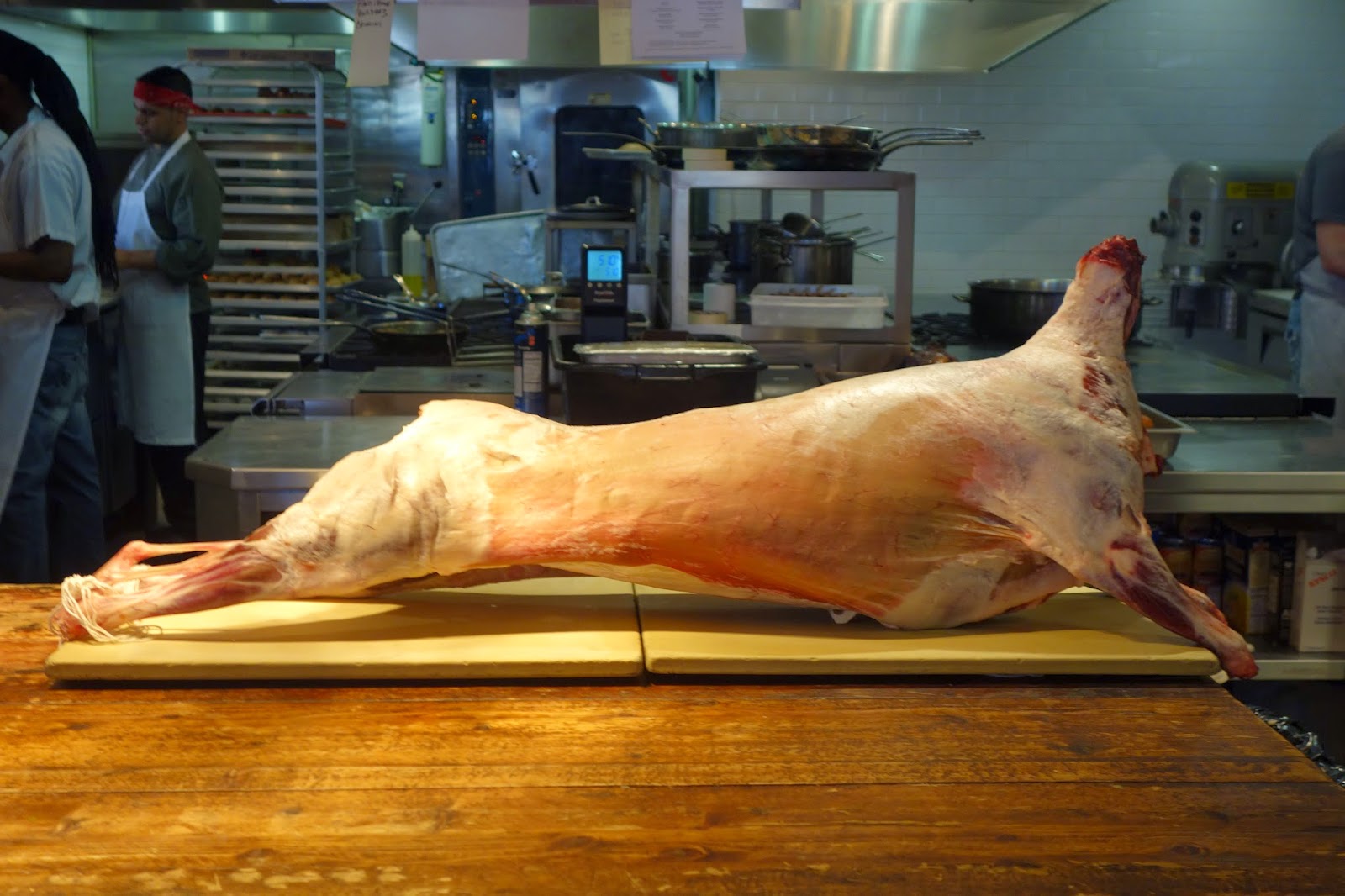 This is the whole lamb prior to being butchered. 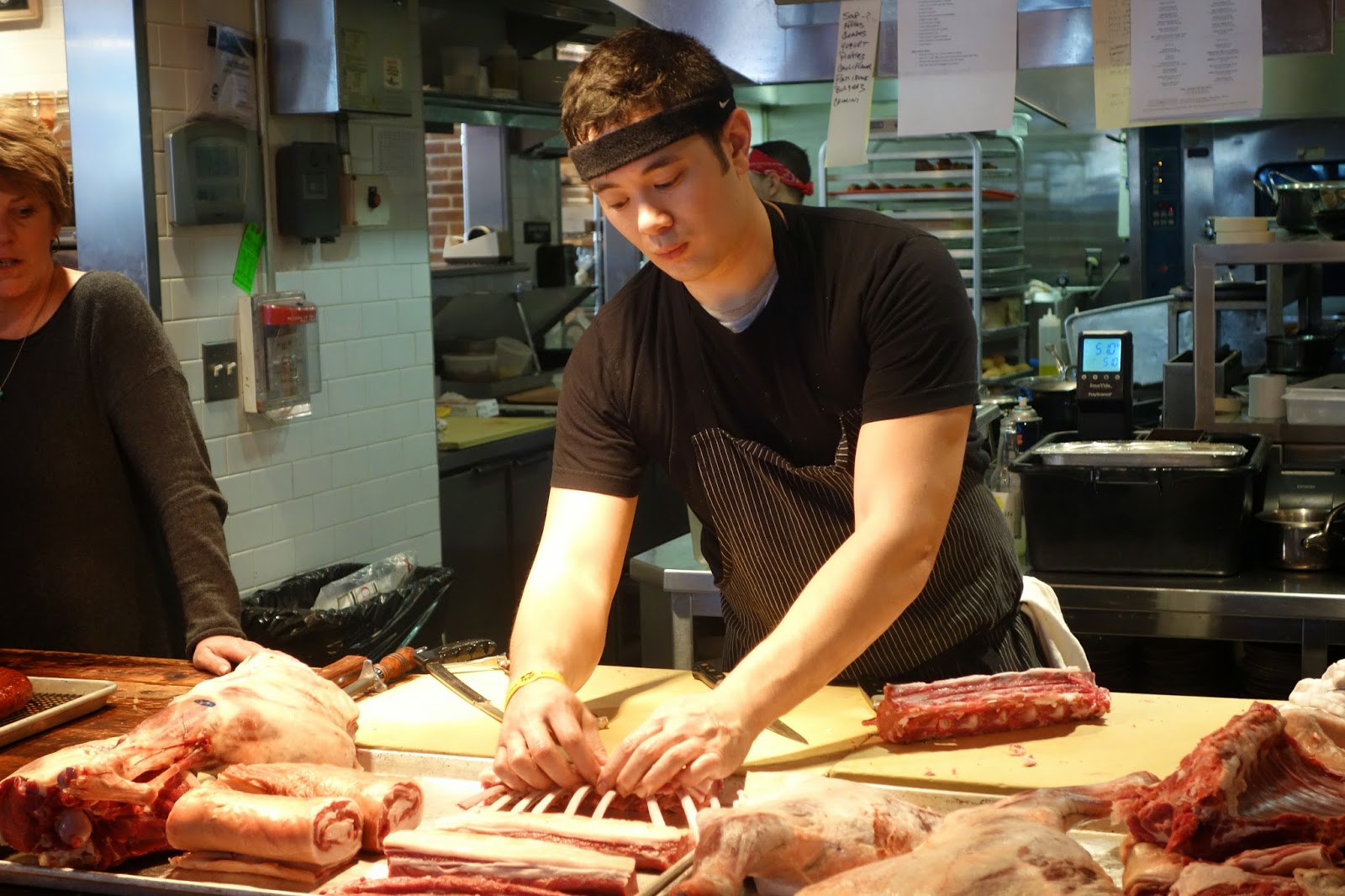 Richard Doucette is placing a rack of lamb onto a tray. He did a superb job of butchery and even made it seem easy. 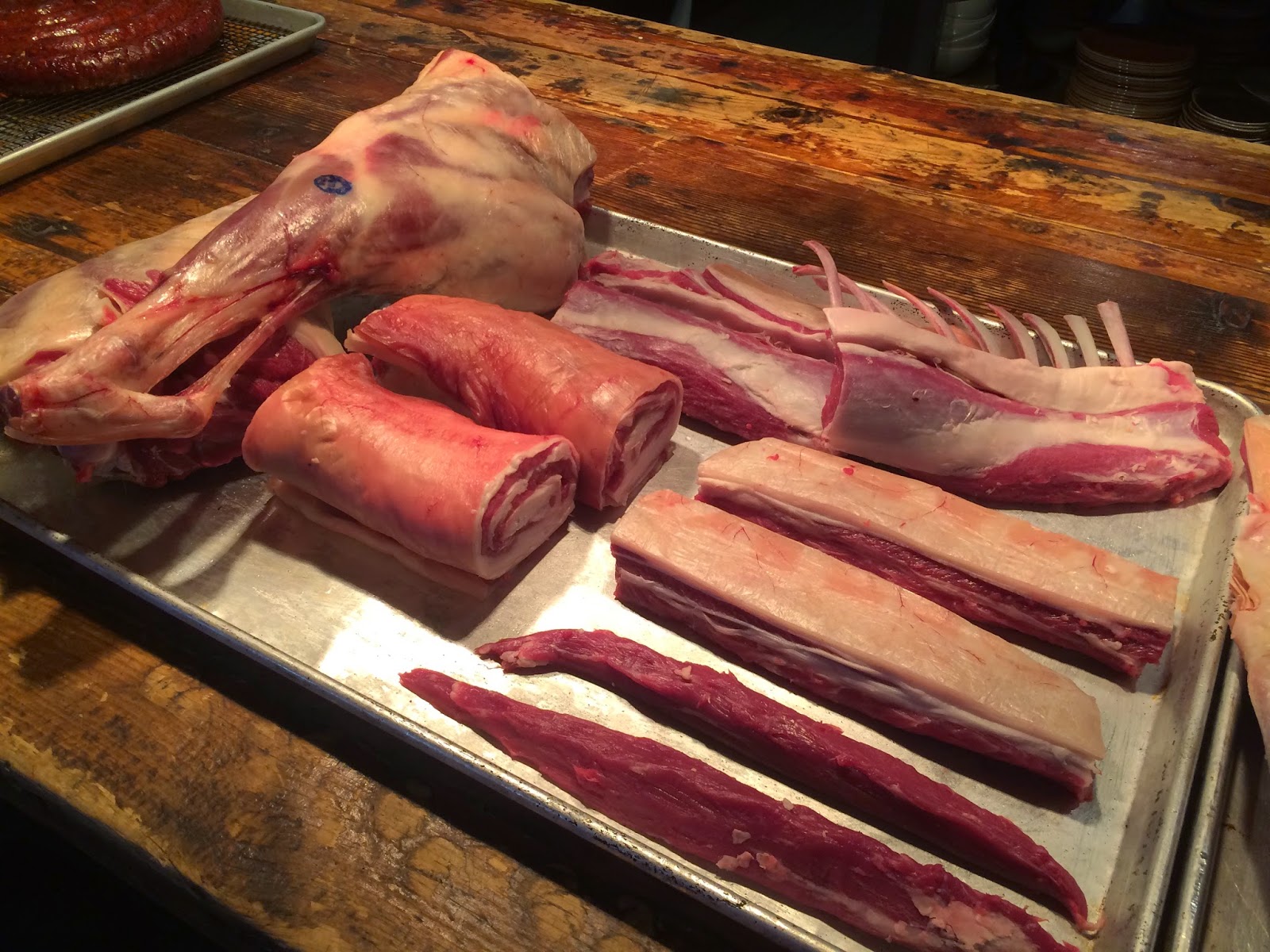 Some of the results from the butchery demo, such appealing cuts of lamb. And the skill of Richard Doucette is more than evident. 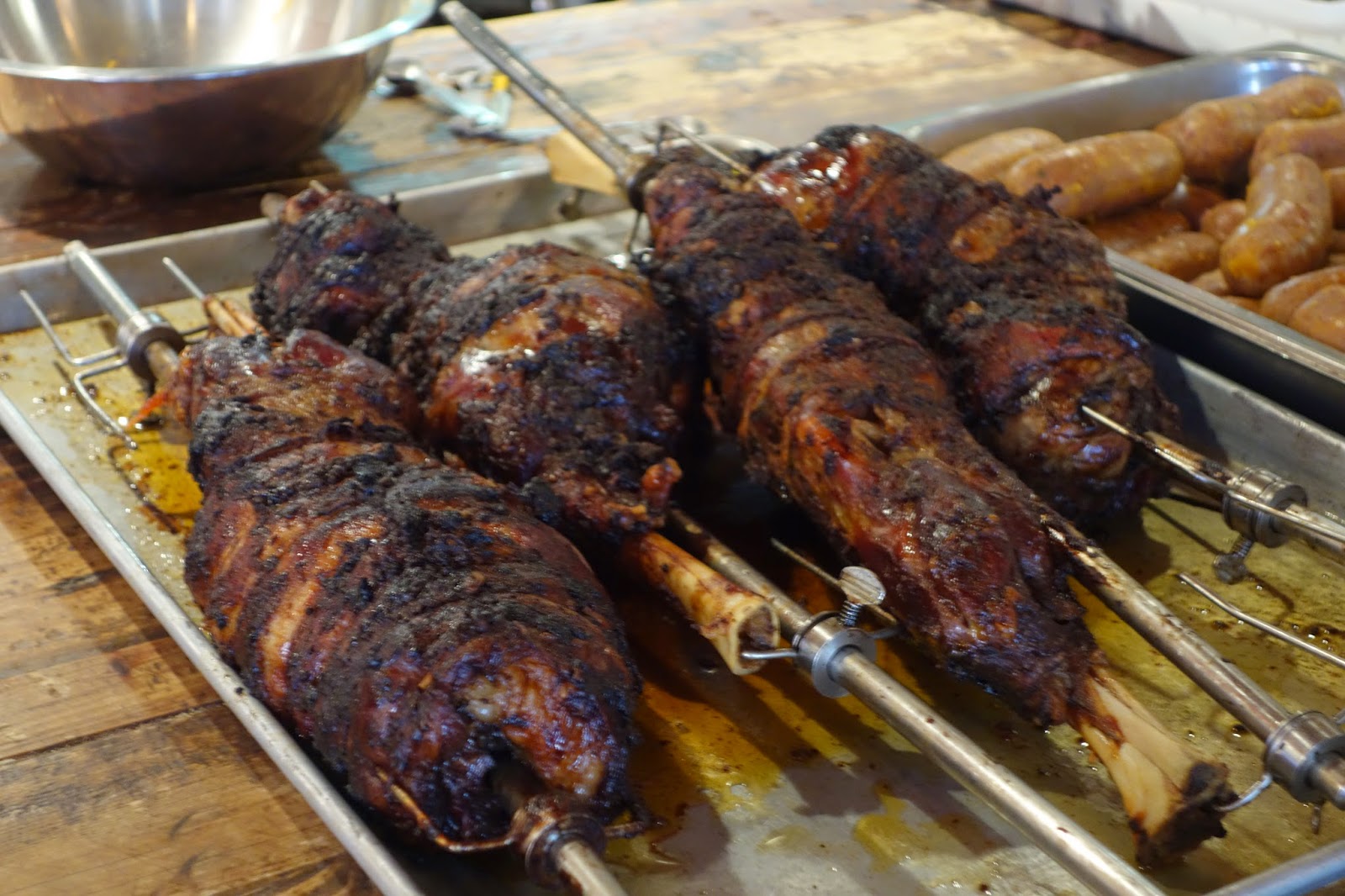 Our lunch was prepared from another lamb, and these were cooked on the rotisserie. 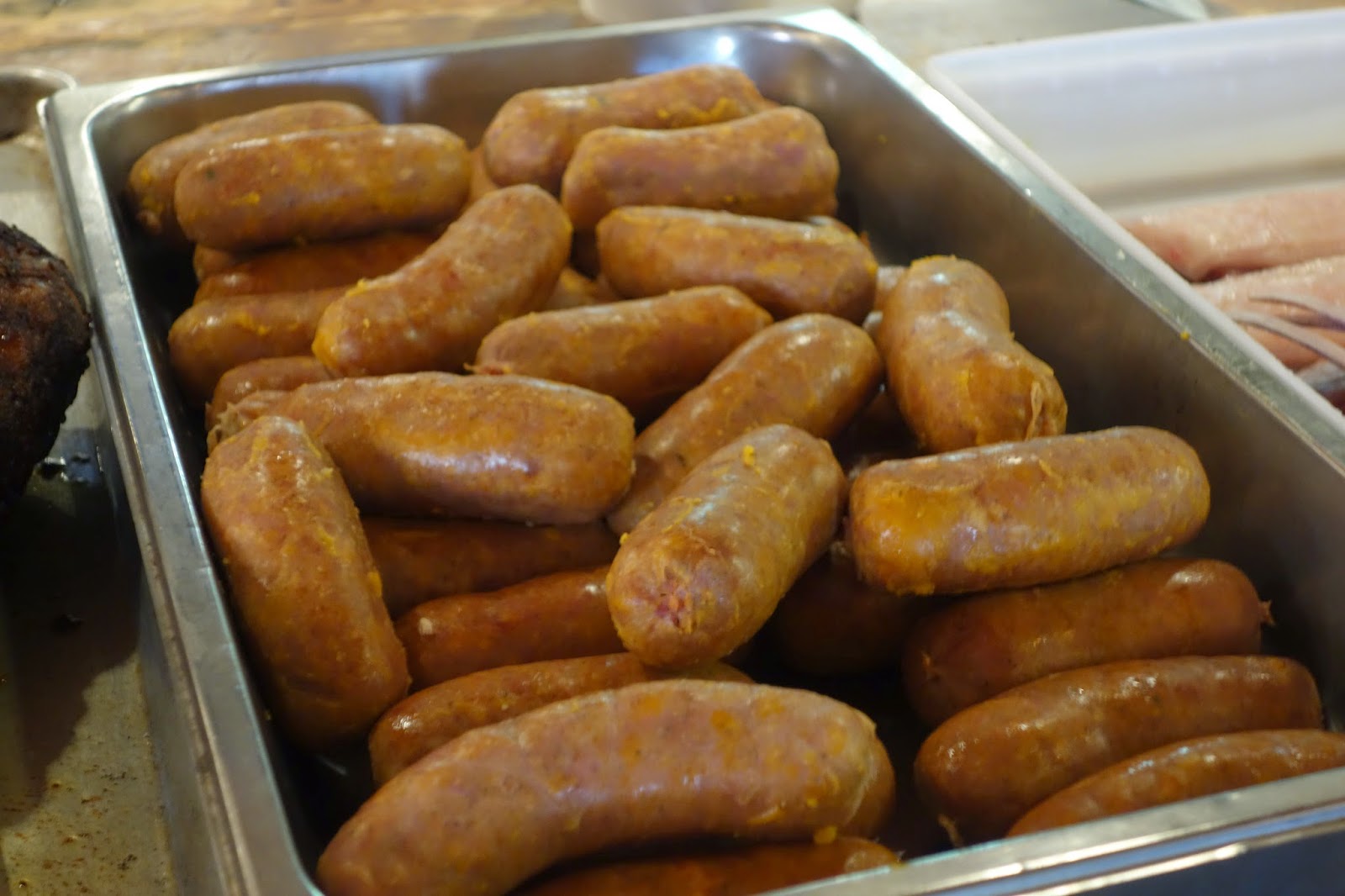 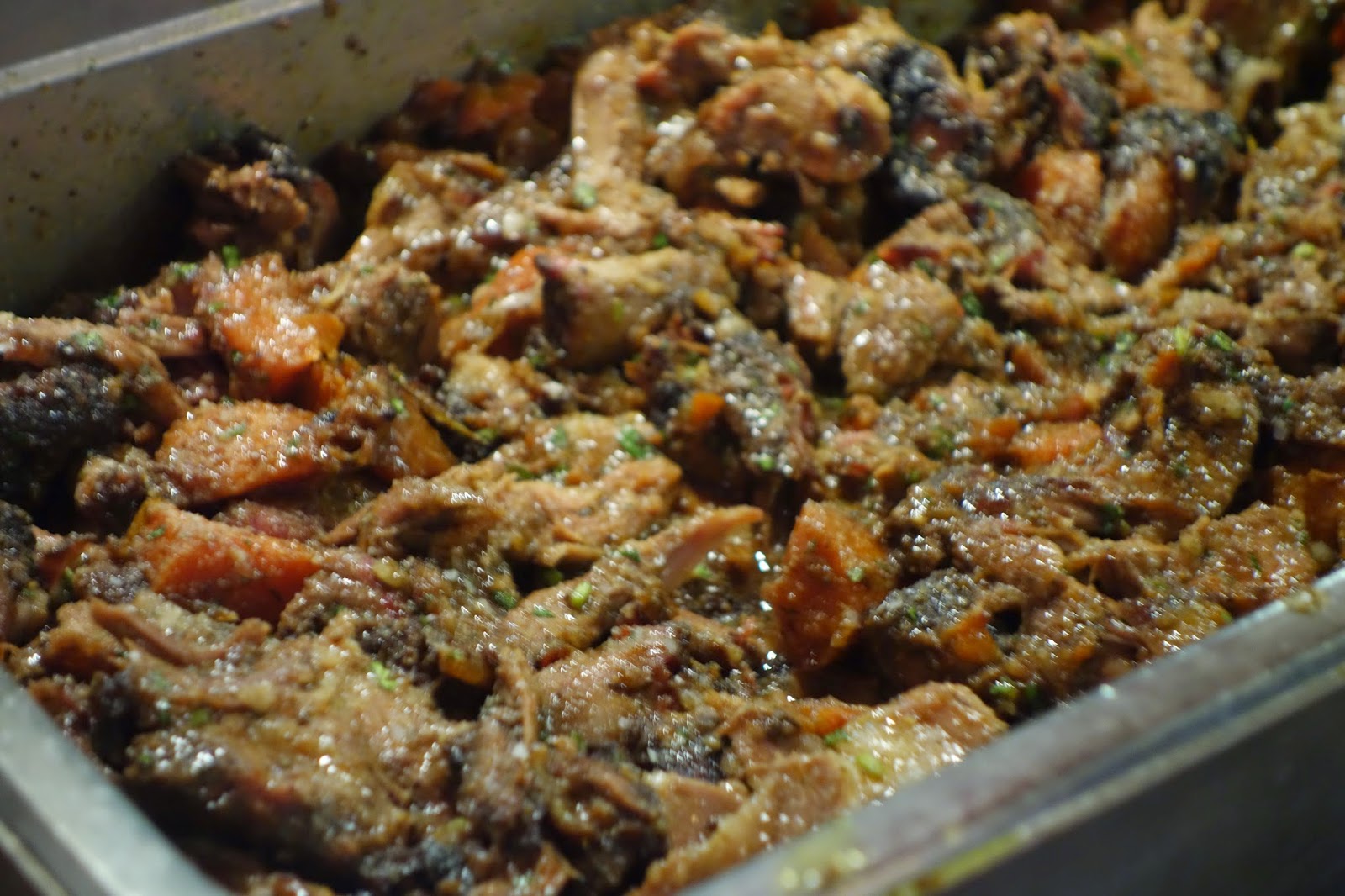 Shredded lamb for the birayni. 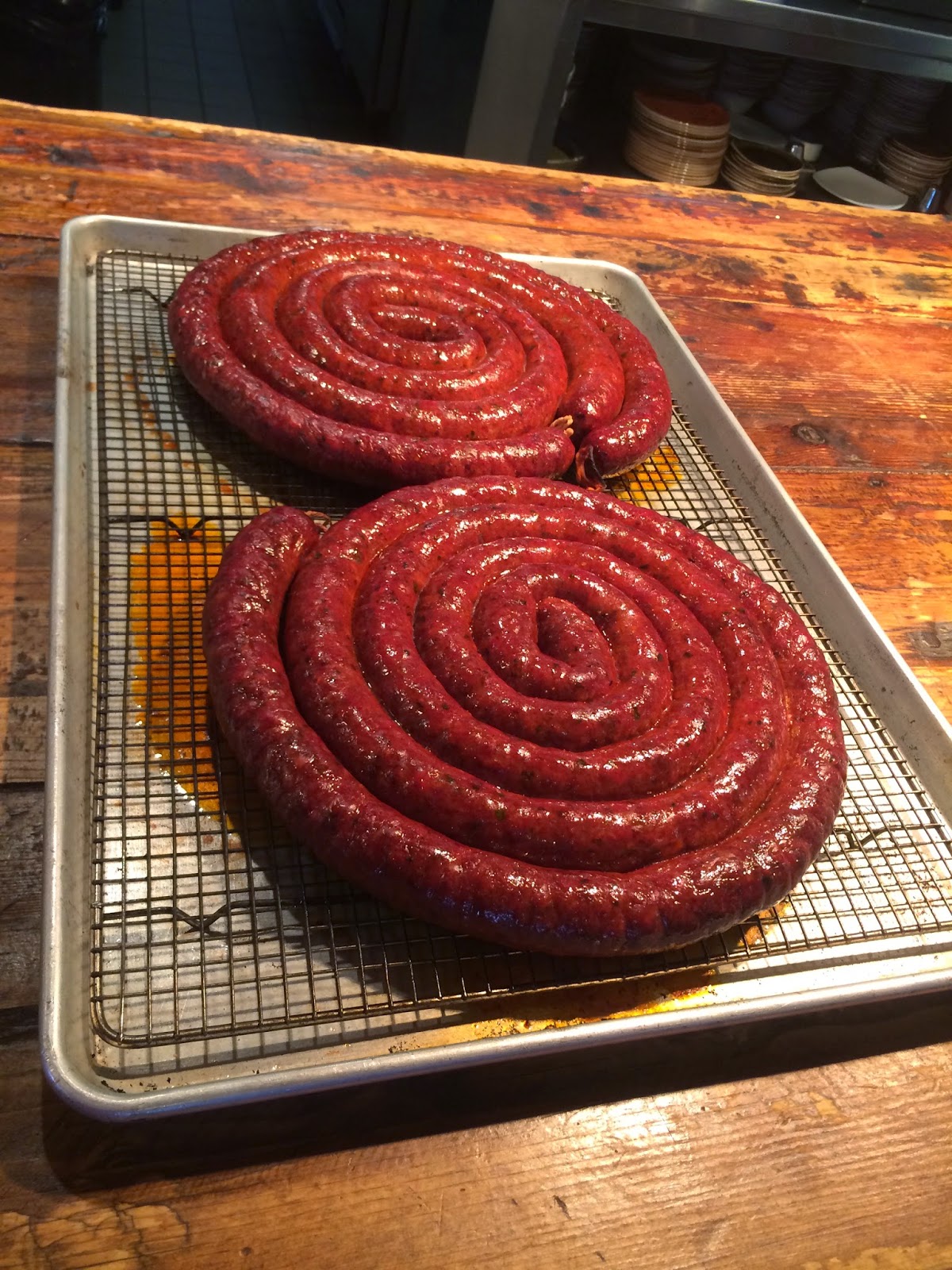 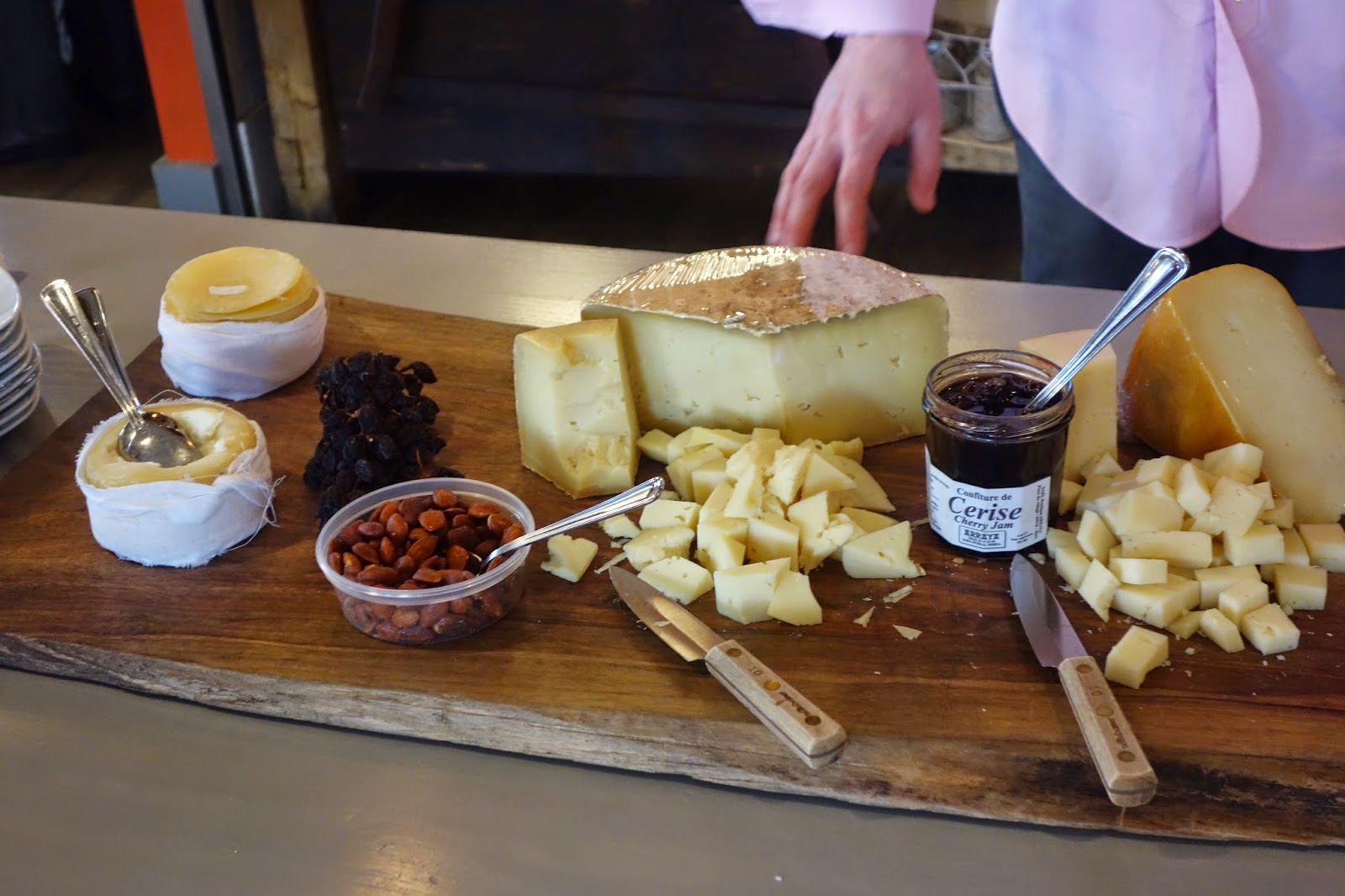 Formaggio Kitchen presented four sheep's milk cheese, and my favorite was a new cheese for me, the Zimbro, a Portuguese raw sheep's milk cheese. It is a thistle-rennet cheese, which is aged for 60 days, and presents a creamy, pudding-like interior. You remove the top of the cheese and then scoop out the soft cheese. In the photo above, you can see the Zimbro on the left with a spoon sticking in it. The Zimbro possessed such an appealing and interesting taste, with soft herbal accents. All of the cheeses were tasty, but the Zimbro was special. 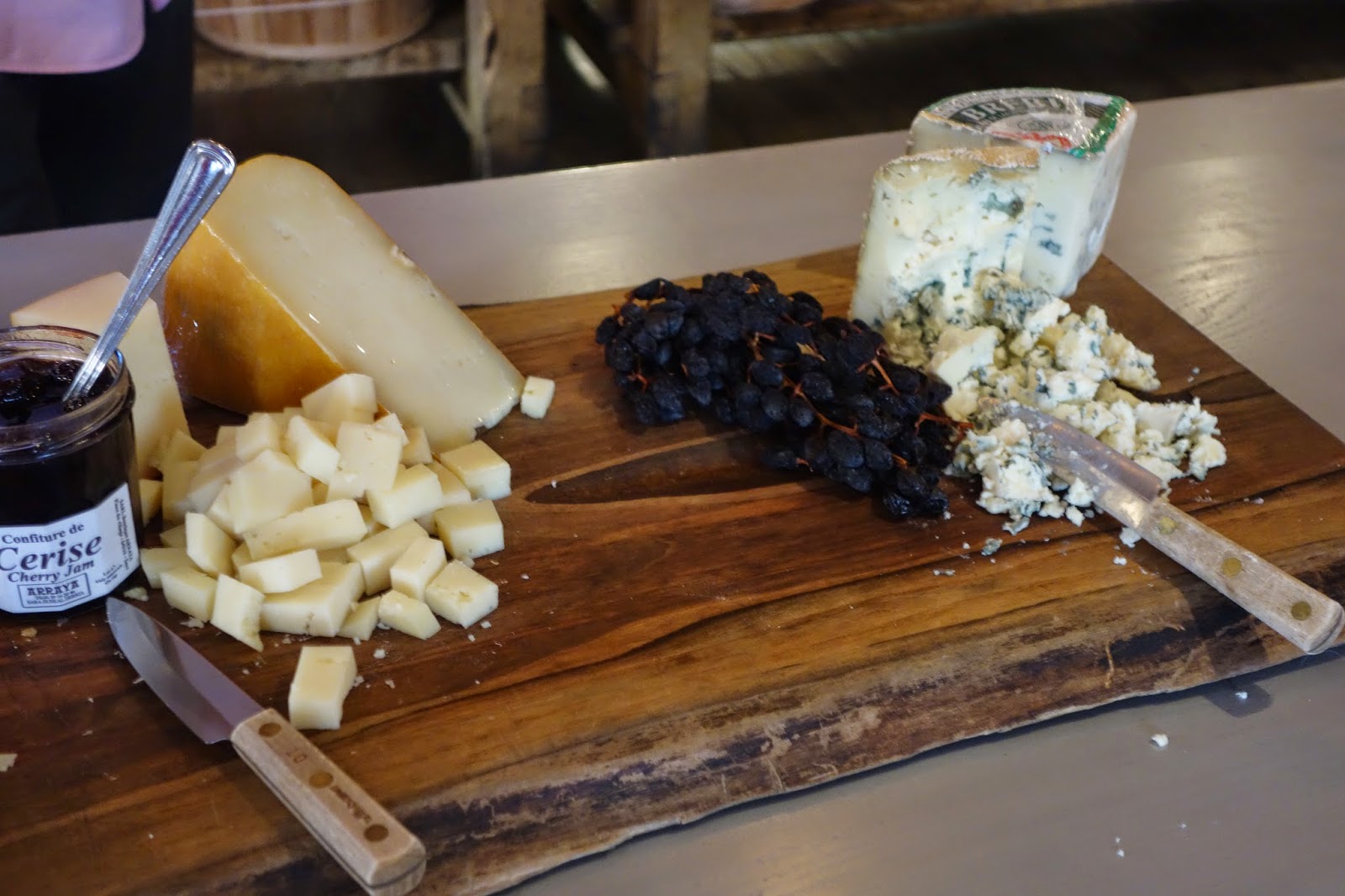 There was even a sheep's milk Blue Cheese. Bring on some Port. 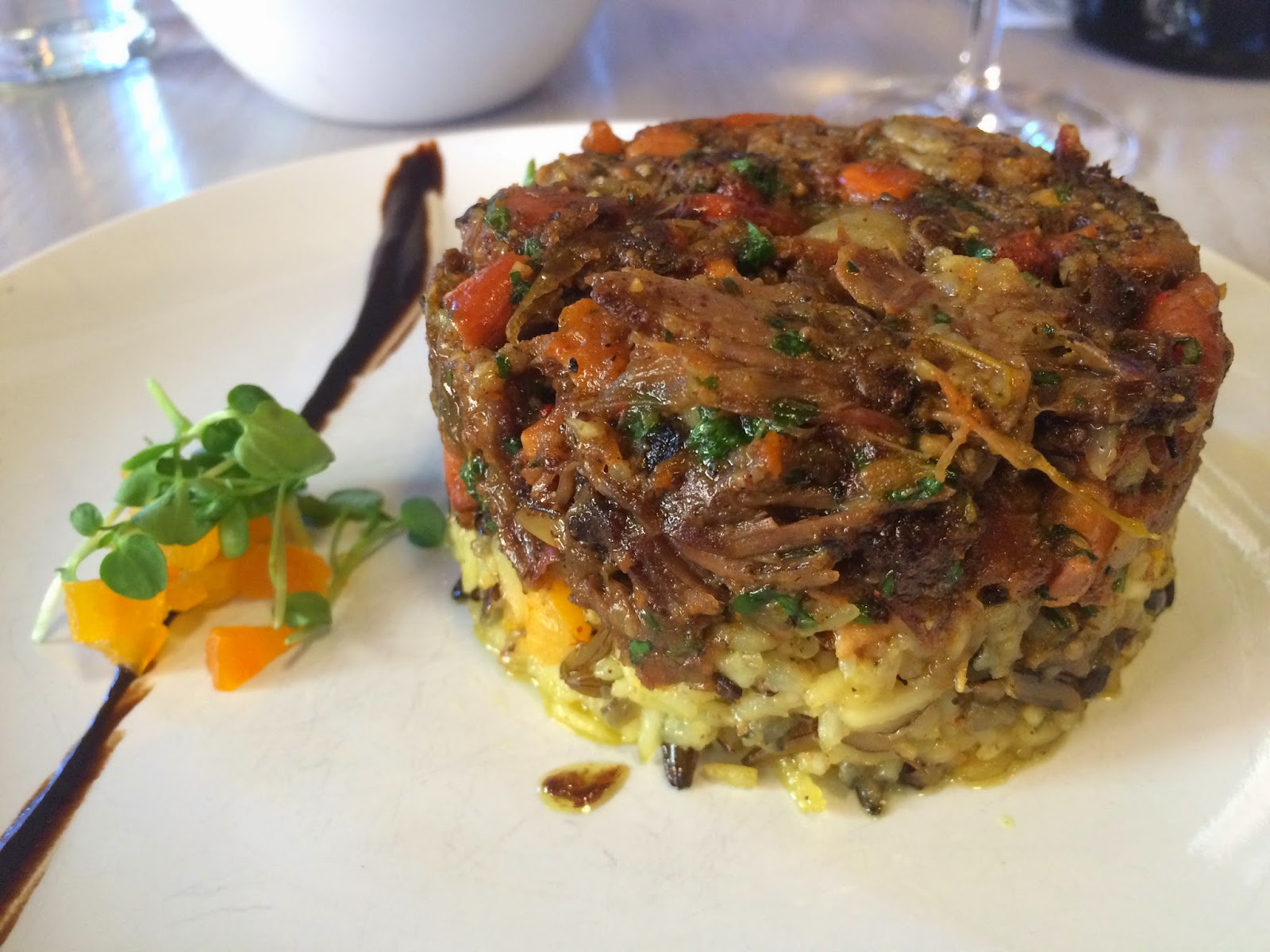 After the lamb discussion and butchery demo, we sat down, looking forward to our lunch. Chef Dibiccari wanted to present lamb in four different styles and types of cuisines, to show its versatility. It also served to showcase his own creativity and culinary skills. The week prior to this lunch, I had attended an Icelandic reception at Tavern Road and enjoyed an Icelandic lamb dish. After enjoying that dish, I was excited to see what the Chef would do with this American lamb.

The first course was Lamb Biranyi, with wild rice, black garlic, rabe, cashew, and dried apricot, and accompanied by a papadum. An excellent presentation, this dish burst with delicious flavors and a nice blend of textures, from the tender lamb to the crunchy cashews. Savory, with sweet accents. this was an addictive dish and I would order it again if it were on the menu. 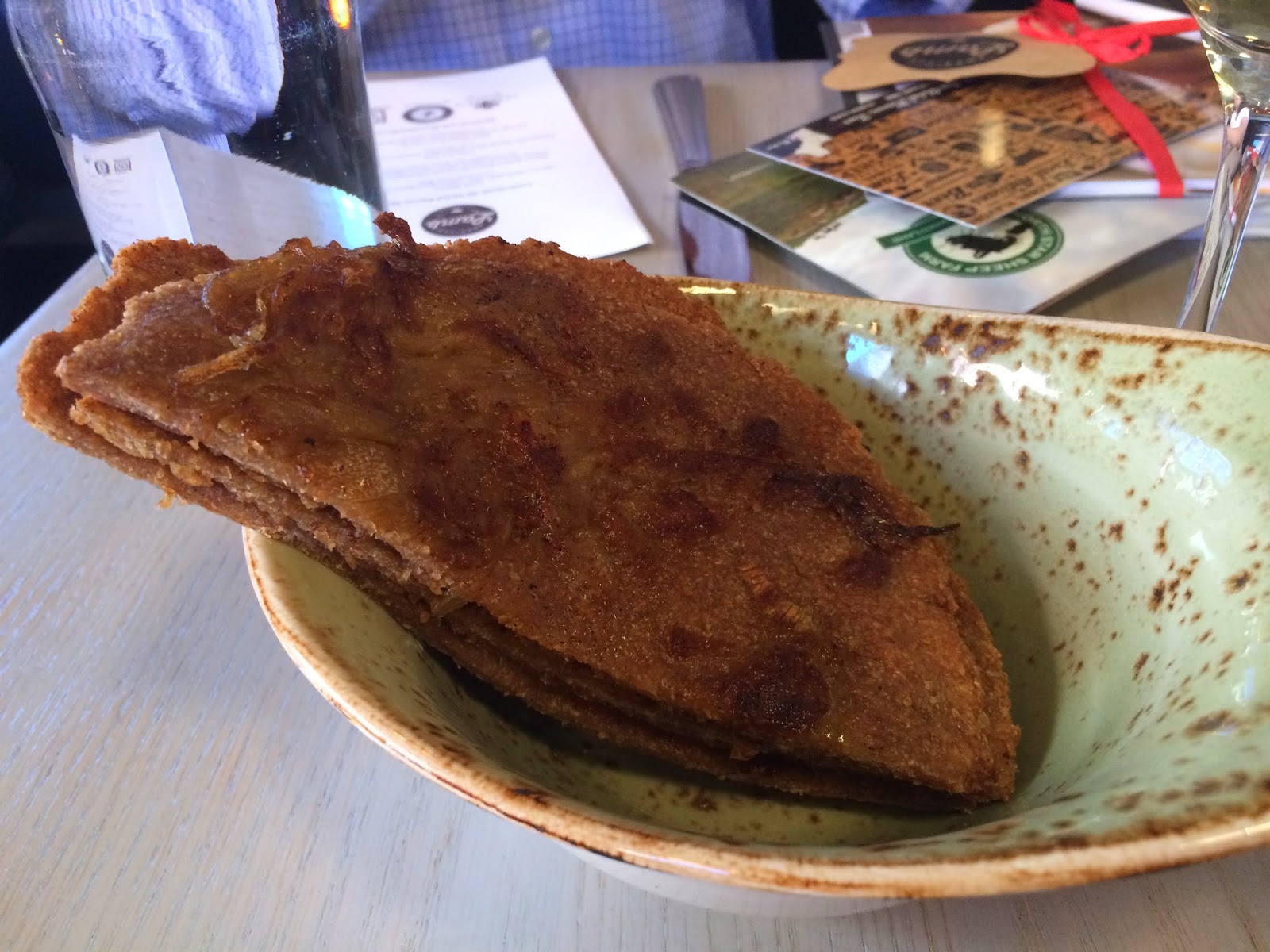 The papadum was different than the usual, being more like a soft flatbread than the crunchy papadum you get at most Indian restaurants, but it still was delicious. 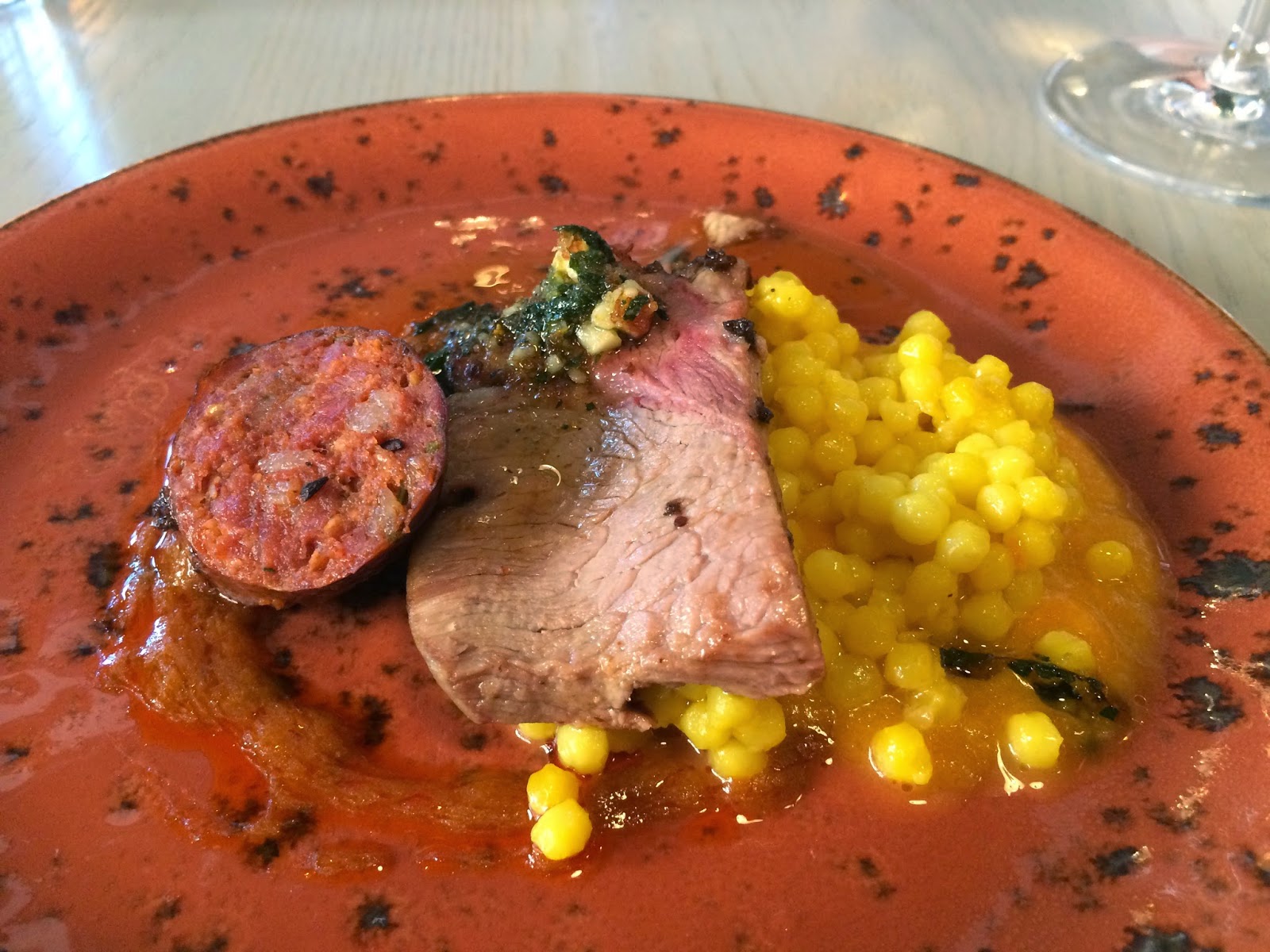 The Harissa Rubbed Roast Leg of Lamb & Merguez Sausage, with kabocha squash, red peppers, saffron couscous, and mint gremoulada, presented a more Mediterranean style lamb. The Merguez was the standout, with a complex, spicy kick. I wished I had much more of the Merguez. The Harissa lamb was tender and flavorful, balanced by the sweetness of the kabocha and the saffron notes. 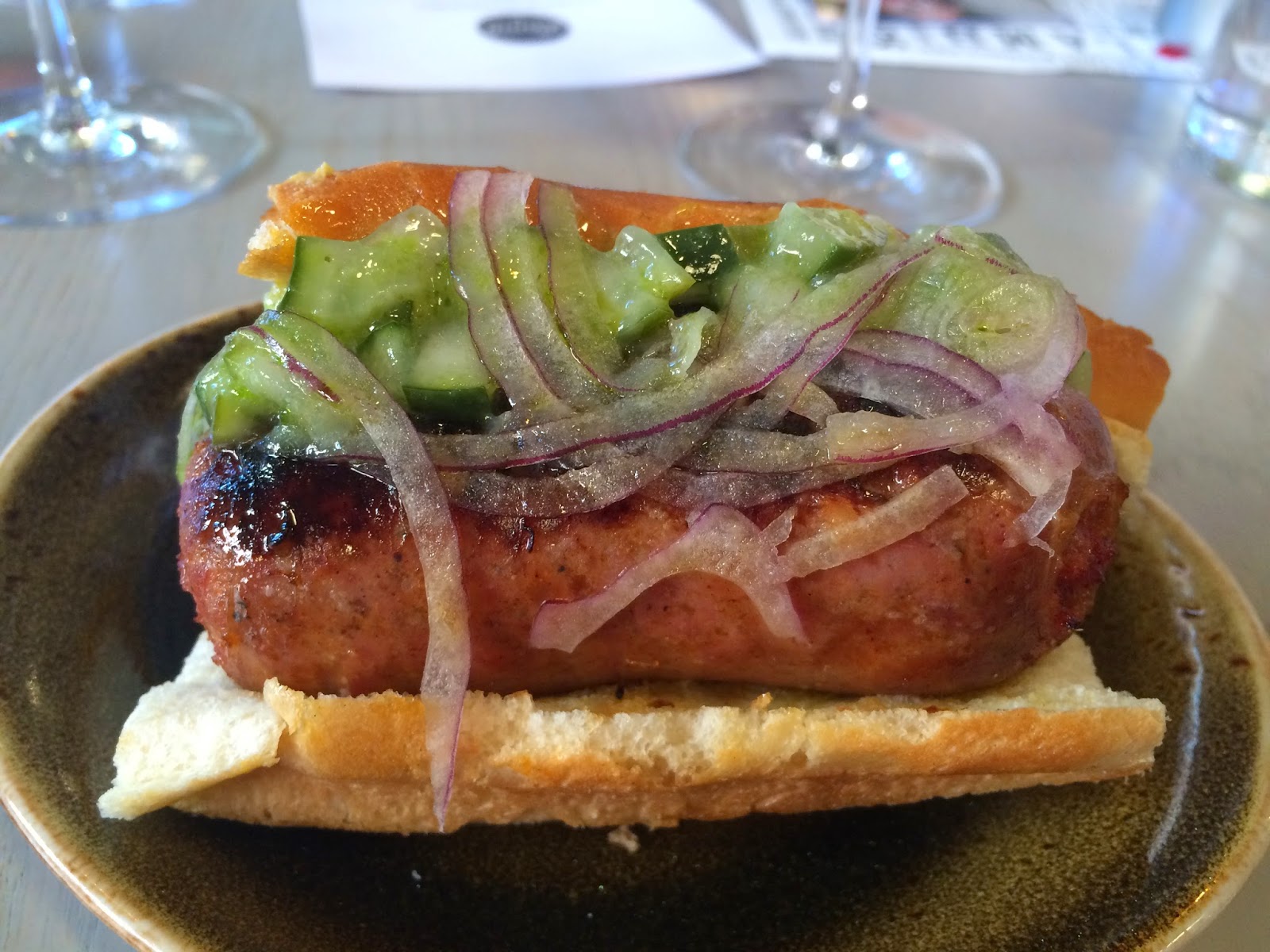 The third course was a Lamb Hot Dog, with a buttered bun, shaved onion, pickle relish, and "French's" yellow mustard (though I had mine without the mustard). Though it seemed more like a sausage than a hot dog, it was thick, juicy and with a complex melange of spices and flavors. Damn, it was delicious. I wish I had these hot dogs this summer for the BBQ. 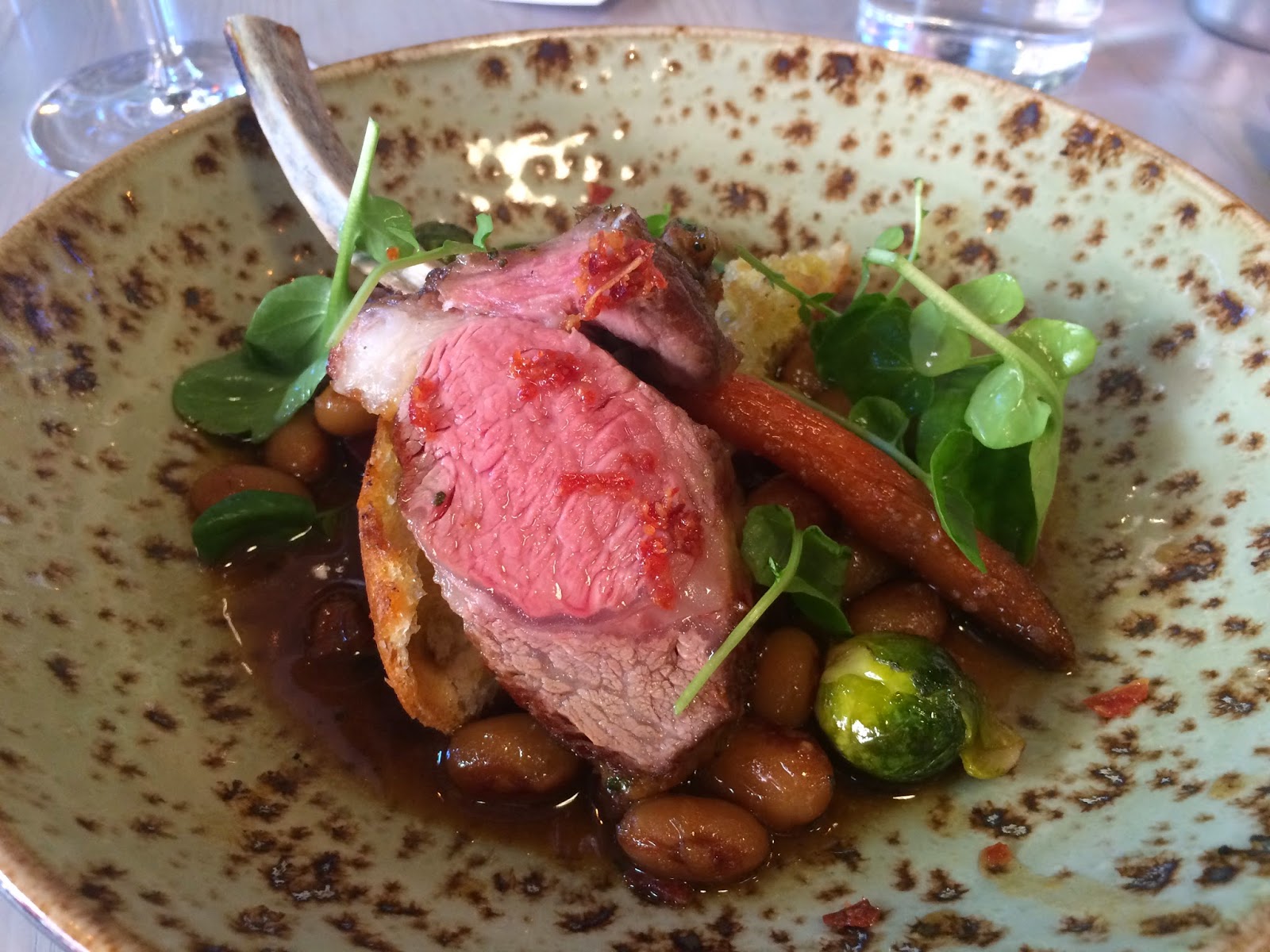 The final course was a Dijon Glazed Rack & Loin, with a cassoulet of Sienna Farms' beans and early spring offerings. Tender lamb, with a mild gamey flavor, and a strong, savory broth and tender beans. And by this point, my belly was quite full of lamb, very satisfied. 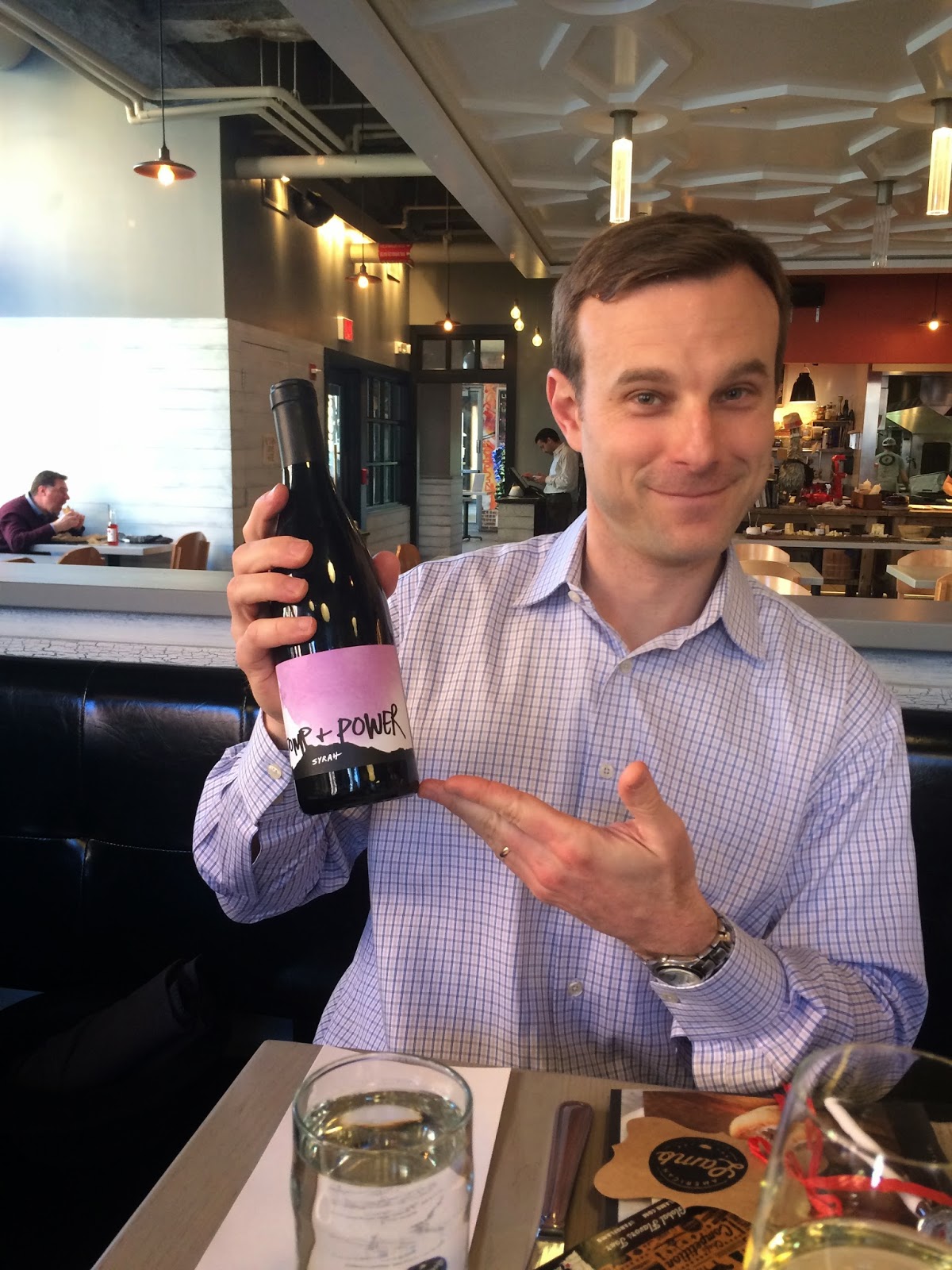 Above is Brett from  90+ Cellars , who supplied four wines for the lunch, including the Lot 65 French Fusion White, Lot 118 Sauvignon Blanc Reserve, Lot 75 Pinot Noir, and Lot 72 Saint Emilion Grand Cru. I've had these wines before and they are very good, values wines.  However, he also shared a new wine they will soon be selling, actually a new label, Earthshaker Wines, that showcases terroir. The wine was the 2013 Syrah, from Knights Valley, Sonoma, California, and it retails for around $15. It was easy drinking, but with complexity and character, making this an excellent value. Deep black fruit flavors, strong spice and restrained tannins. A perfect choice for lamb, 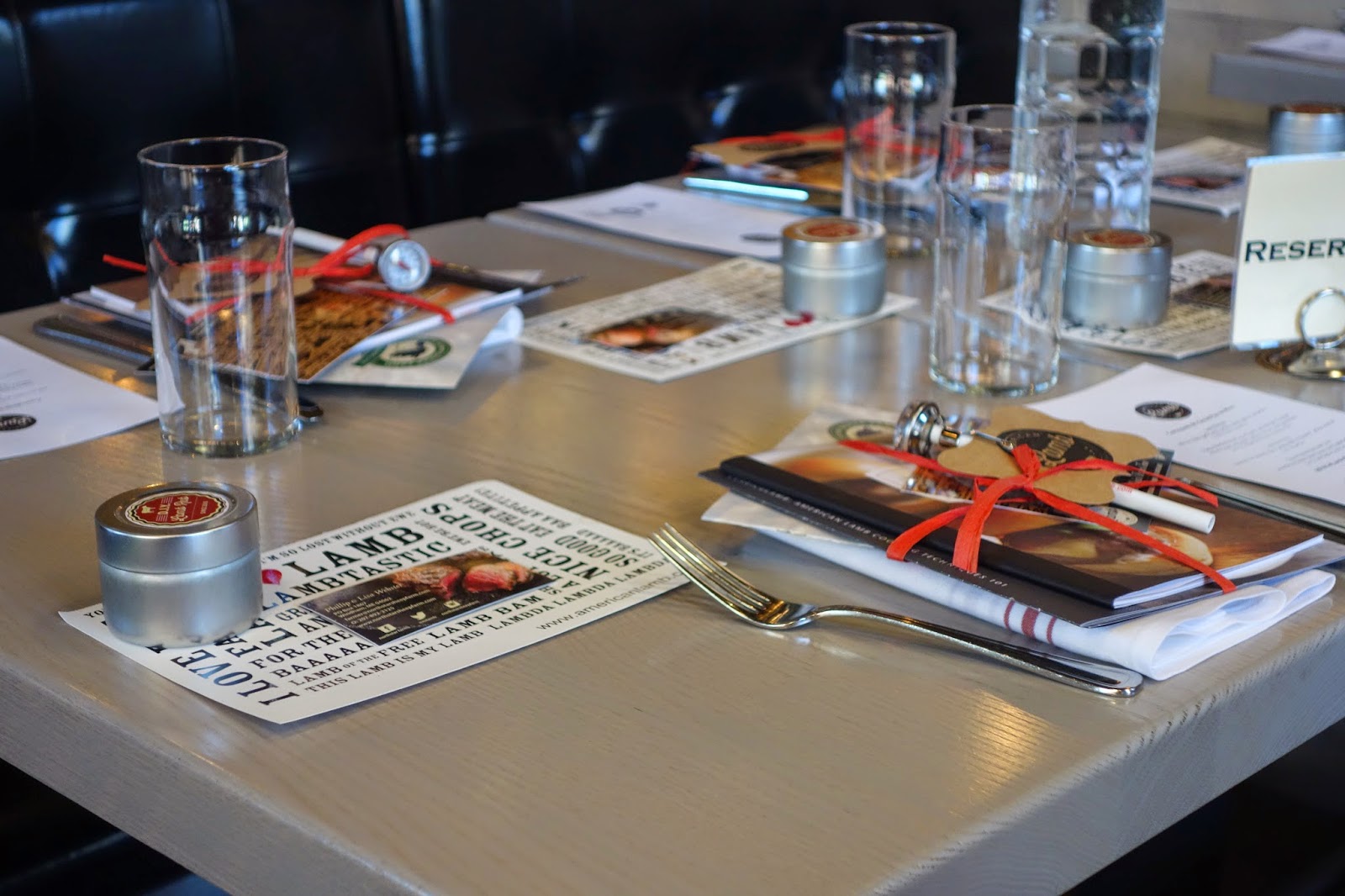 This was an informative and tasty lunch, providing plenty of fascinating info on lamb as well as a series of delicious and diverse lamb dishes. I've gained a greater appreciation for the culinary skills of Chef Dibiccari and my love for lamb continues.

Will I see you at the Lamb Jam?
Posted by Richard Auffrey at 3:00 AM