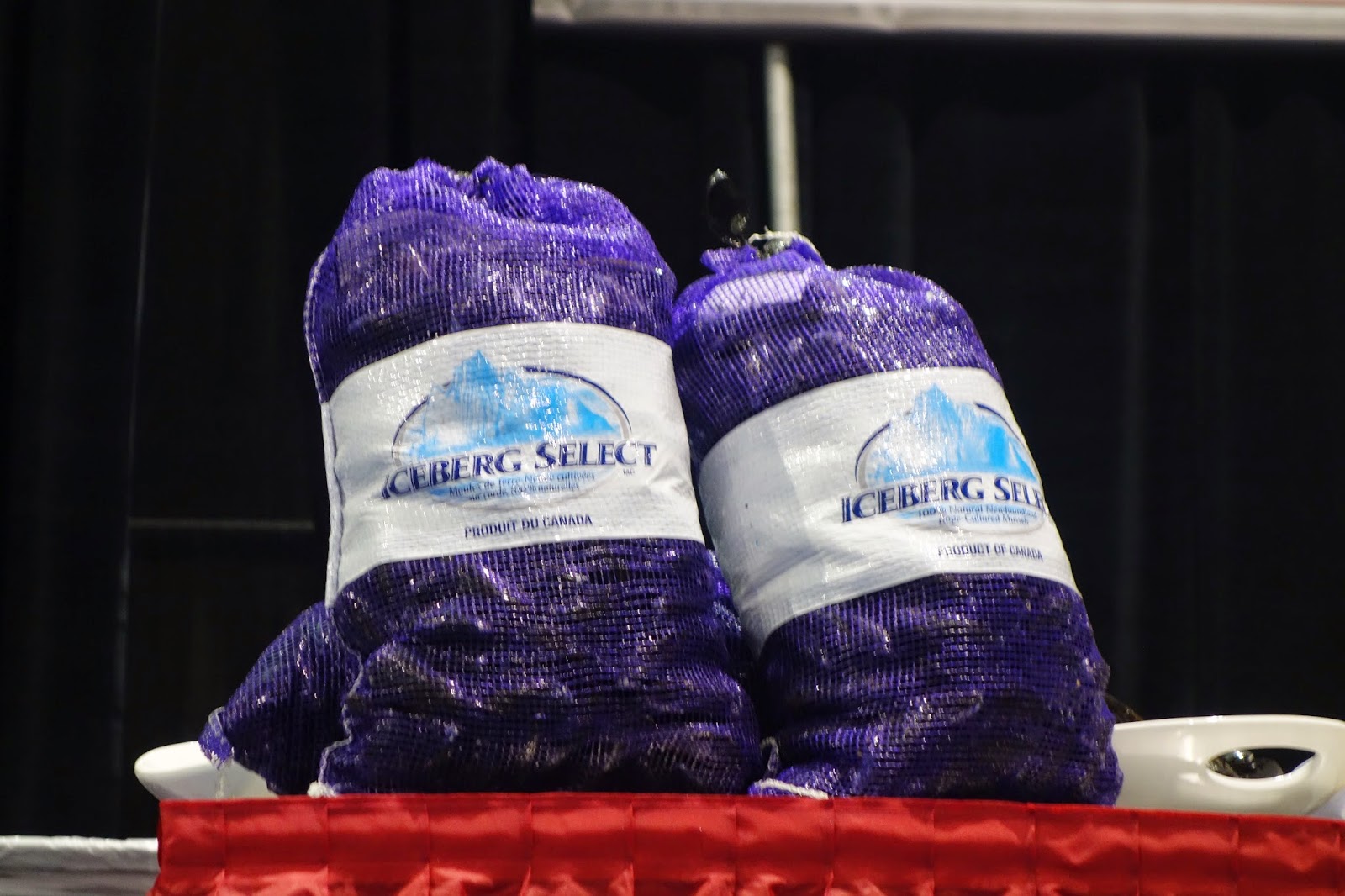 It is unfortunate that only about 1% of all American households purchase Mussels. Why is that so? Mussels are inexpensive, sustainable, nutritious, versatile, and tasty. There are an excellent seafood for so many different reasons. I've written a couple previous articles extolling the virtues of mussels, including Want Cheap, Tasty, Healthy & Sustainable Seafood? Choose Mussels and Eating More Mussels. I want to spread the word about mussels, to instill even a small bit of my passion for them into other people.

At the Seafood Expo North America (SENA), I attended a Master Class on Canada’s Organic Blue Mussels. A Master Class is a more in-depth seminar on a specific type of seafood, and this year at SENA, there was only one such Master Class. This mussel class was presided over by Cyr Coutrier, the President of the Newfoundland Aquacuture Industry Association while Chef Steve Watson prepared two different mussel dishes, 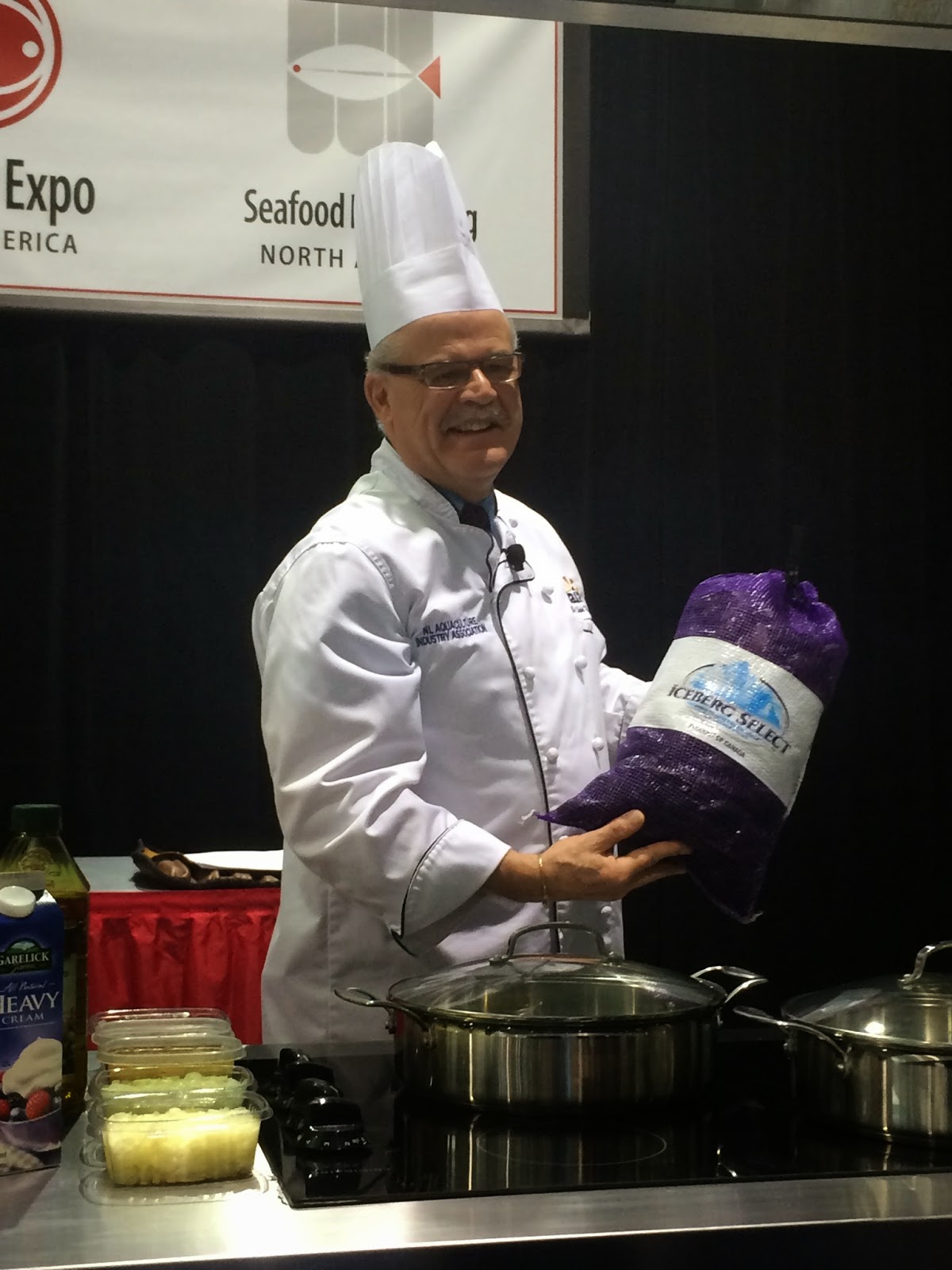 Chef Steve Watson is a Food Service Representative and Executive Chef.for Central Dairies. He is a native of England who came to Canada in 1977 to study North American cooking; He is also well known as the co-host of One Chef One Critic, a weekly television which highlights cooking, interviews with local celebrity guests and culinary features. In addition, he is the co-author of a book, Cooking With One Chef One Critic, which is based on the television show. 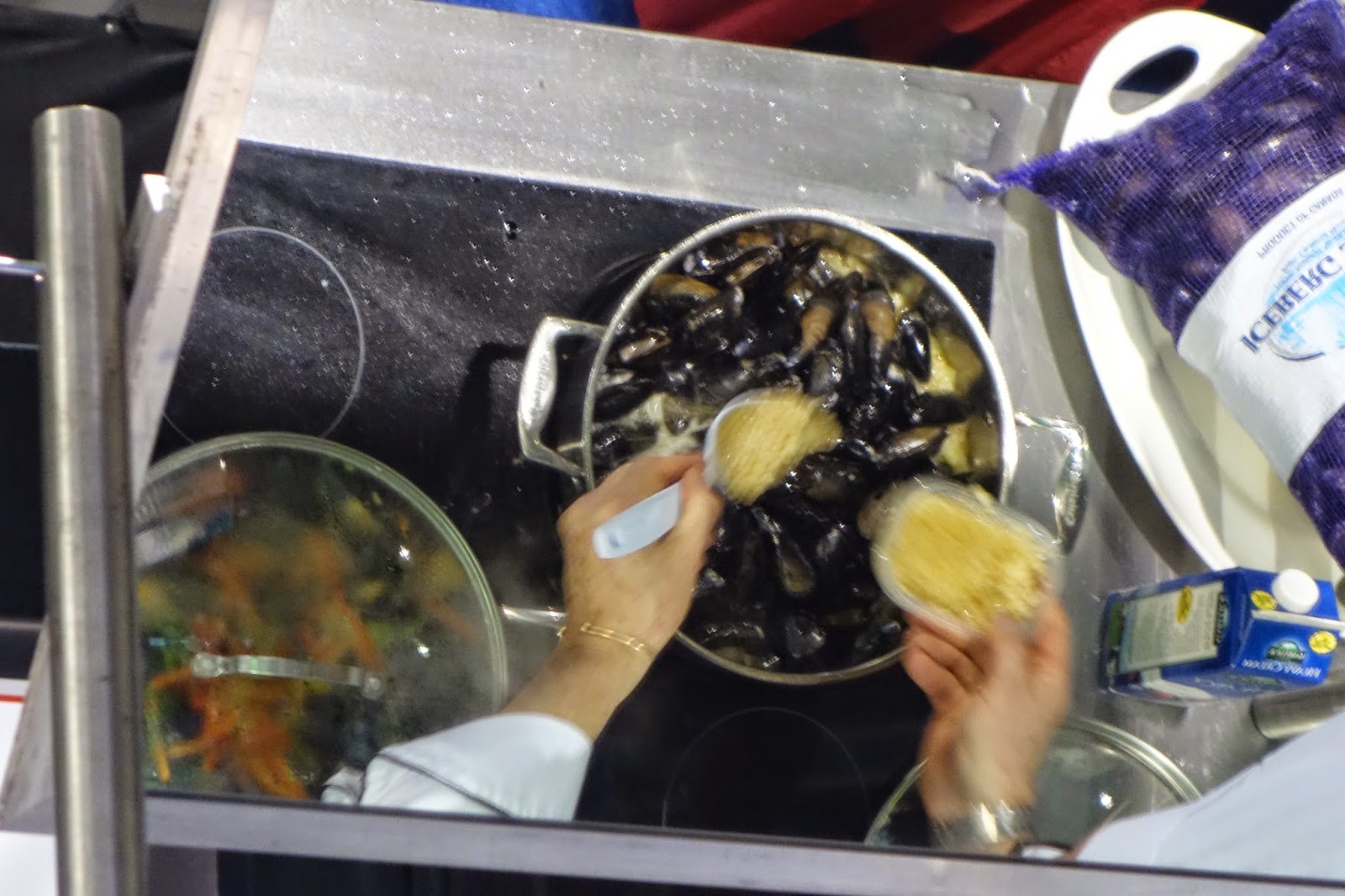 These organic mussels are the blue mussel, also known as the common mussel, which is the most valued mussel species in the world. They are filter feeders, and can process more than a dozen gallons of water each day. Blue mussels are rounder, deeper and more oval, with an average length of 55-65 mm. There are about 22-24 mussels per 500 grams, and their meat yield will vary seasonally. Interestingly, you can tell the sex of a mussel from the color of its flesh. Females are orange while males are white. Fresh mussels will last about 12-14 days in a refrigerator, while frozen mussels will last about a year.

As I've said before, mussels are very nutritious. They are a good source of vitamins, such as Vitamin A, protein and zinc. In fact, they contain nearly 100% of the recommended daily allowance of zinc. In addition, they are a good source of Omega-3 fatty acids, and an average size plate of mussels possesses as much Omega-3 fatty acids as 6 ounces of salmon. Mussels are also much less expensive than salmon. 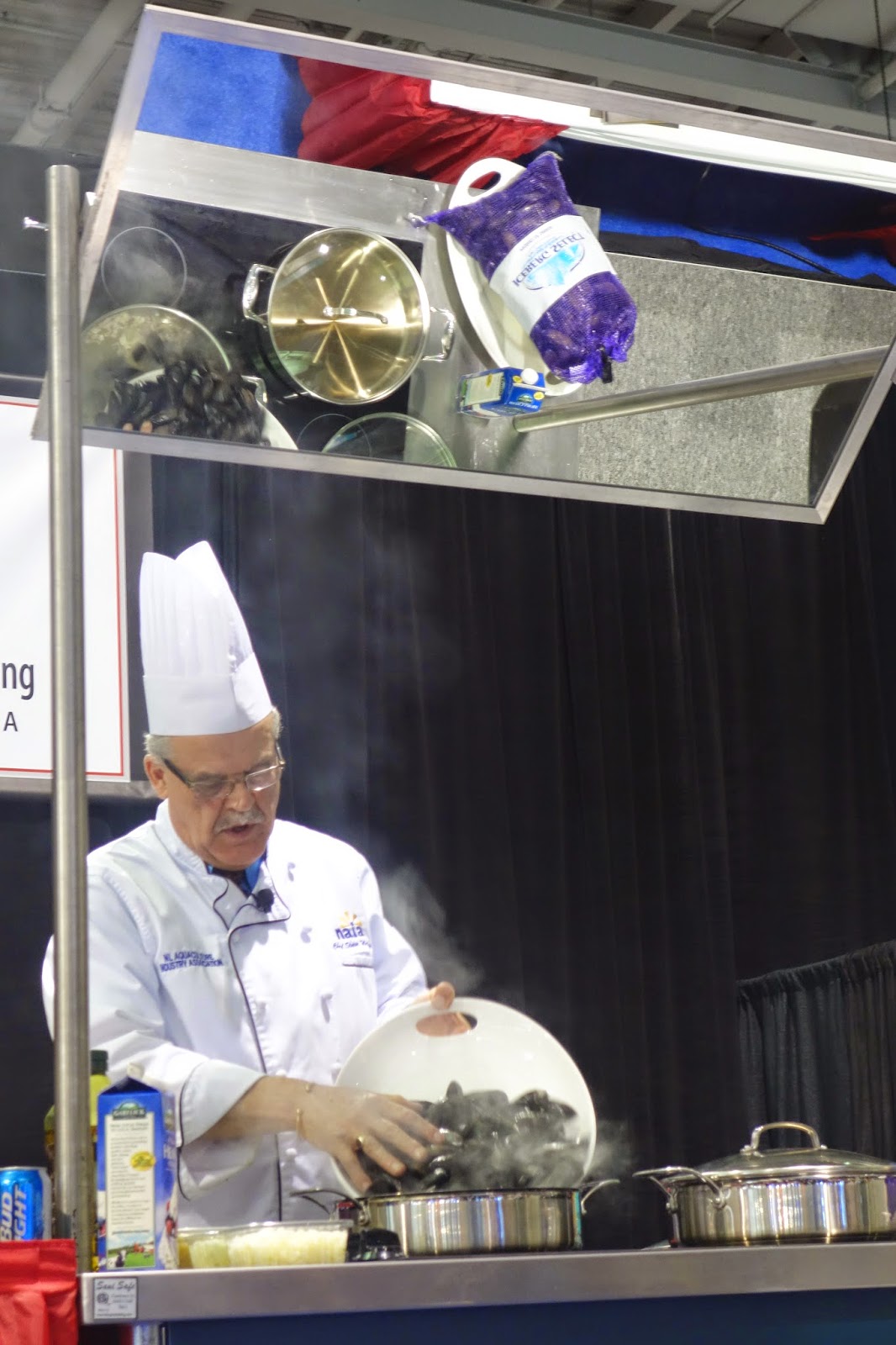 These blue mussels from Newfoundland were the first certified organic mussels in North America, regulated by the Canadian Organic Aquaculture Standard. There are now a few other organic blue mussel operations in Labrador and Prince Edward Island. The standards they follow are strict, and ensure that they do not use synthetic chemicals or pesticides, that they do not use any GMO products, and that there is complete traceability. They are grown in the pristine and icy waters of the North Atlantic, isolated away from industrial activity. They do not have any negative impact on any other marine life, and you can learn much more about the standards they follow from their website.

Production of these mussels has generally been growing, with a large jump from 2000 to 2007, a more than tripling from 1,051 tonnes to 3,390 tonnes. From 2013 to 2014, there was little growth due to harsh weather conditions, and there doesn't seem there will be much growth, if any, in 2015. However, the demand for these mussels continues to grow so the industry is trying to find ways to increase production, while dealing with the weather, Most of the fresh mussel supply is sold within North America while frozen mussels most often are exported to Asia. 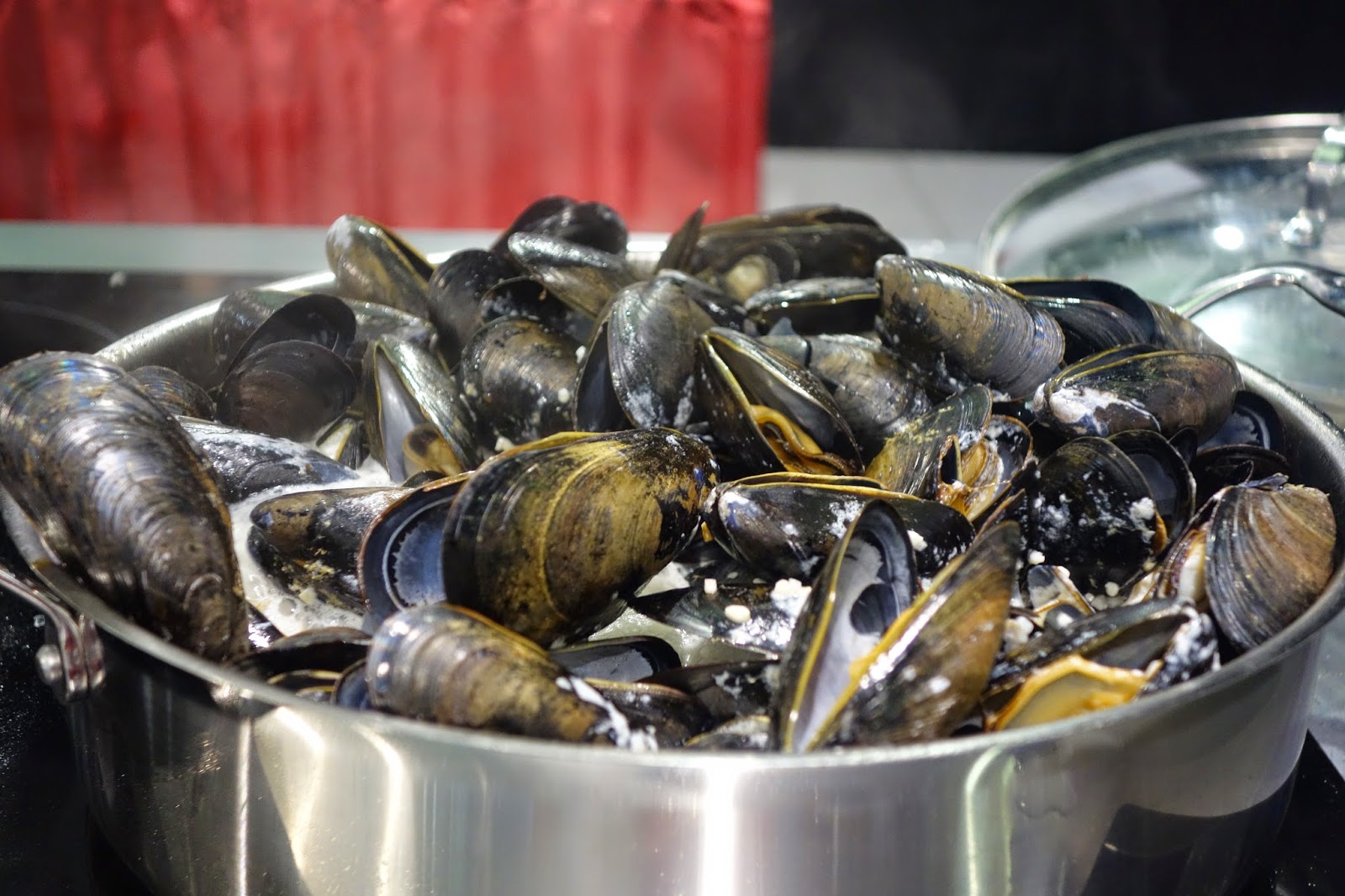 Mussels are versatile, and some typical preparations include steaming them in the shell with garlic, wine, cream, curry, marinara sauce or a similar type of liquid. They can be created as appetizers or main dishes. I asked the Chef whether he had ever used mussels in a dessert, and though he said he hadn't used the mussels themselves, he has used their broth, reducing it down and then caramelizing it, I have seen Lobster Gelato so why not a Mussel Gelatio too? The Chef also stated that mussels are easy and quick to cook, usually taking no more than 15 minutes after prepped.

Using Iceberg Select Mussels, Chef prepared two mussel recipes, including Thai Chili:and Garlic Cream Sauce. We got to sample both dishes, and my favorite of the two was the Thai Chile which possessed a spicy hear that pleased my palate. The Garlic Cream, made with Bud Light beer, heavy cream and a stick of butter, was delicious as well. Both recipes were simple to make, and you could easily make them at home. I just wish I had a crusty baguette so I could have sopped up the broth, but instead I simply drank it down.

Eat more mussels. You have no excuse not to enjoy them.
Posted by Richard Auffrey at 6:30 AM