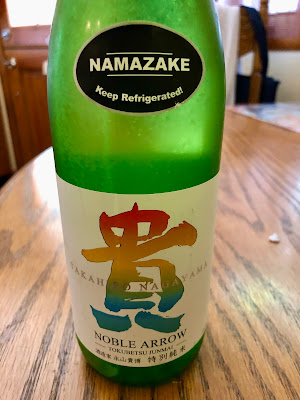 Wine lovers, pay attention to a Sake with similarities to Chablis from Burgundy.
The Nagayama Honke Brewery, which was founded in 1888, is located in the Yamaguchi Prefecture. The current President and Toji is Takashiro Nagayama but before starting as the Toji, he spent time working with the famed Philippe Pacalet in Burgundy. Takashiro found a special passion for Chablis, terroir and the effects of limestone. When he returned to the Sake brewery, Takashiro desired to produce Sake that was reflective of terroir, and which benefited from limestone.
Takashiro only uses rice grown on their estate, in limestone rich soils, although most other breweries purchase their rice from elsewhere. In addition, the region around the brewery is located above the largest limestone cave in Japan, and Takashiro uses the water that flows over this limestone, benefiting from its high calcium levels. Terroir in Sake (which is worthy of its own article) is a relatively new concept, and Takashiro is certainly one of the leaders in this field.
The Takahiro Nagayama "Noble Arrow" Nama Tokubetsu Junmai Sake ($40/720ml) was produced from a blend of Yamada Nishiki rice, often considered to be the King of Sake Sake, and Hattan Nishiki, and it was polished to 60%. That is a Ginjo level polishing rate, which is likely why this Sake is labeled as Tokubetsu. The Sake also has a Sake Meter Value (SMV) of +2 , an Acidity of 1.6 (which is higher than usual), and a 15.5% ABV.
This is a fascinating and complex Sake, aromatic and rich in flavor, with creamy notes and an underlying minerality. Its higher acidity is clear, providing a delightful crispness to its taste. There are flavors of melon and green apple, with a mild minty note on the finish. It does remind me of some mineral-driven French white wines, though you won't forget it is Sake. As such, it is delightful on its own, but would pair well with foods that those French whites do. This would be great with oysters and other raw seafood.
This Sake should convince you of the possibilities of Terroir in Sake. Locally, this Sake can be found at Malden Center Fine Wines and I highly recommend you check it out.
Posted by Richard Auffrey at 2:30 AM

Sounds fascinating, will try it. Never before thought of terroir in connection with sake, but of course! And I have to chuckle about how well it pairs with oysters... an authentic Richard Auffrey comment!