Closed For Nearly 50 Years: A History Of The Sahara Syrian Restaurant 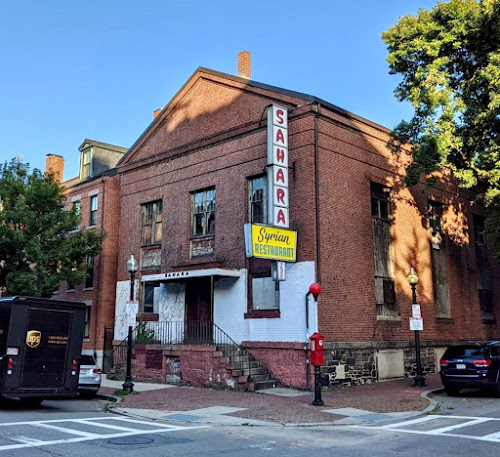 (Photo courtesy of Patrick Maguire)
It's an iconic sign on Shawmut Avenue in Boston's South End, yet the restaurant itself has been closed for nearly fifty years. The building has largely remained unused for all these years, except as a storage place by its current owners. It's obviously a valuable piece of property and its unfortunate that after all these years it hasn't been transformed into another restaurant or other commercial business.
Although many people are aware of the restaurant sign, the history of the restaurant itself is much less known. That history is quite fascinating, including attempts to start a new restaurant at that location, as well as to create a new location of the Sahara. And what is the connection of an ex-belly dancer to the Sahara? Let me offer some of the interesting history of the Sahara restaurant and its location.
The building itself extends back to the middle of the 19th century. According to the Boston Globe, October 24, 2004, “The Greek Revival-style building was built by the German Lutheran Society of Boston, which opened it as a church in 1847. Services were held exclusively in German for almost 40 years,…” In 1898, it was then sold to the Calvary Baptist Church, but ended up being repossessed in 1915.
Through the Suffolk County Registry of Deeds, and searching in the Unindexed Property records, I was able to track ownership of the property which later became the Sahara restaurant. In 1924, John P. Vaccaro sold the property to Hovhannes Zovickian, Mourad P. Mouradian, and Kabriel S. Papazian. Two years later, in 1926, those three men sold the property to the Baikar Association, Inc.
The Boston Globe, December 31, 1934, indicated this organization, which was founded and headquartered in Boston, had over 40,000 Armenian members across the country. It was said to be the "largest patriotic and educational Armenian society in the country," with 102 branches across the U.S.  The organization also published an Armenian newspaper, and it appears the printing occurred at the Shawmut Avenue property. In addition, the North Adams Transcript, June 8, 1934, indicated the property was occupied by the Armenian Democratic Liberal (ADL) party.
The Baikar Association owned this property for about 37 years, when, in July 1963, they sold the property to Victoria K. Matta, a widow, for $8,000. This will take on more importance later in this article.
************
As I wrote previously, the earliest Syrian immigrants to Boston formed their own community, Little Syria, which was adjacent to and overlapped Chinatown. However, from 1920 to 1945, Syrian immigrants started branching out from Little Syria, settling in other sections of Boston, including the South End, especially around Shawmut Avenue. In these new neighborhoods, they opened Syrian businesses, from grocery stores to restaurant.
For example, one of the important Syrian businesses was the Syrian Grocery Importing Co., at 270 Shawmut Avenue, which opened in 1940, and still is in operation today. There was even an earlier Syrian grocery store in this area, which existed at least since 1933, at 452 Shawmut Avenue, and was owned by Khorean Tchuljian. 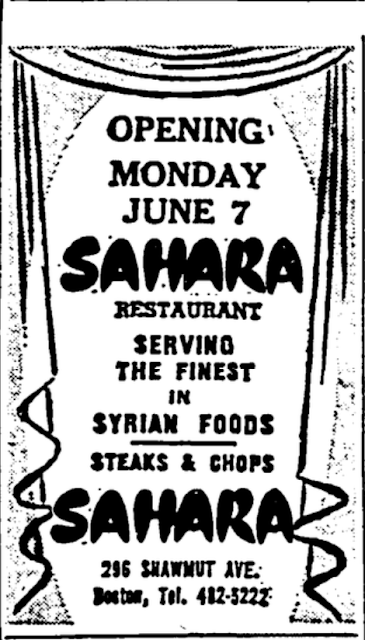 The first reference I found to the Sahara restaurant was an advertisement in the Boston Herald, June 4, 1965. The restaurant, located at 296 Shawmut Avenue, planned to open on Monday, June 7, and would serve "the finest in Syrian foods" as well as steaks & chops. On that same date, the Boston Traveler, June 4, 1965, mentioned the upcoming opening of Sam Khoury’s Sahara restaurant, where the feature of the house would be shish-ka-bab. Sam Khoury may have been the owner of the restaurant, though he was renting the space from the property owner, Victoria Matta.
Several days after the restaurant's opening, the Boston Herald, June 11, 1965, briefly stated: “Fine Syrian foods are served at the Sahara Restaurant on Shawmut Avenue in Boston. While Shish-ka-bab is the gourmet delight here, you may also partake of their fabulous lamb delicacies if you’ve a mind to.”

A little more information was provided in the Boston Herald, July 9, 1965, noting: “Curried rice pilaf, various ka-bobs and wonderful lamb dishes are the order at the Sahara Restaurant in Boston. Wall to wall red carpeting adorns the floors, and the walls are a walnut paneling, making for a pleasant dining atmosphere.” 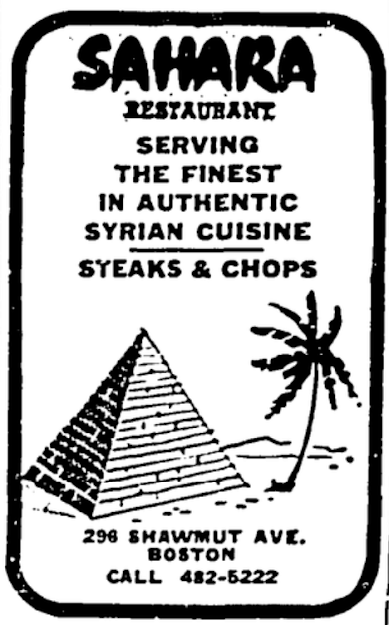 The Boston Herald, July 16, 1965, offered a new advertisement for the Sahara restaurant, with a pyramid and palm tree.
Months later, the Boston Herald, November 12, 1965, noted that the Sahara was open until 3am each night, offering "shishkabobs," lamb dishes, and “tempting pastry.” 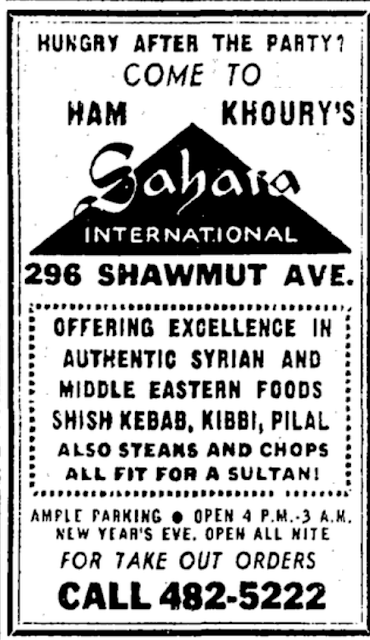 First of all - thank you! I live just down the street and have always wondered about the building and its history. As for what the neighbors want...I'm not so sure that's as accurately reflected here. I would be interested to hear more about it, but I consider the building a relic and a proud relief of the history of our neighborhood. There is very little left of the old South End, which was a testament to immigrants, outcasts, and diversity. The Sahara is a stark reminder that we are, in relative terms, not so far from that history. I always appreciate it for that reason. Perhaps instead of another restaurant or business, it could become a community center or some other community-oriented space.

Thanks for the informative history lesson! Whenever I pass this building I have hope that it will be developed into a useful entity before it becomes decrepit and must be demolished. Such a spacious old building with a generously sized parking lot is a rarity in the South End.

Paul and I went on our first date to eat at the Sahara in August 1971. We married in May 1972. Lived on Union Park. Had a son and daughter. Being in the South End was wonderful!! Best years ever. Now, a framed photograph of the Sahara sign hangs on our kitchen wall. Great memories

What a wonderfully researched history. Thank you. We lived on Shawmut Avenue for nearly 20 years and never could get a handle on that building. Your reporting is a real service. And I love your theory about Victoria Matta.

I was brought up in the south end in the 50's and lived on Shawmut av 3-4 different times near the Sahara ..in mid and late 60's i would gp there after drinking and eat up a storm ..they always served Lebanese food ..didn't like it but after awhile i began to like the food ..

AJ has it right.Richard Buck and his brother George were pioneers in development of the South End Especially Union Park where they bought many buildings and redid them.Richard had always known the South End would become one of the most desired places to live in Boston.

I know the brothers that own this!! My dad used to work at this restaurant on the grill when he first came to America. He said that at that point, he made so little money that he would basically eat the best meat while he cooked. We used to go to the brother’s Syrian store next door and have labne and maneesh every week when we’d go to the south end to fix stuff for tenants, etc. The brothers, till this day, can’t agree on what they want to do with the property! My father, who is now 72, is sitting next to me as I read this to him and he is telling me the entire history of the restaurant and reminiscing about the brothers and the entire family!

Thank you for that interesting piece of history. I never ate at the Sahara, but I fondly remember eating at the Red Fez which was located on Washington Street near Dover (Now called East Berkeley).

Great piece. Love the history. I for one would love to see a new restaurant in that location. Can never have too many options for dinner. I walked by there yesterday and there is a builders permit in the window and a banner for JMLR Contracting LLC 617 818-8710. Maybe something is finally happening

last month I bought the last. Packages of Halavah on the shelf. Mmmmmmm. I asked Ramon to re-order. The trick is to show up on a day when the boys are in the store. Every time I go by, the lights may be on, but no one is home.

Could not agree more with you AJ! I've always admired and loved this building. It is by no means an eyesore. The patina is charming and makes me fond of our neighborhood's vibrant history that too often gets erased. As an architect I was always intrigued as it indeed looks like a church? But...retro groovy restaurant? Your research has given me deep satisfaction to know it's origins. Thank you! I noticed a building permit is now on site. Anyone know what lies ahead? I can only hope it's a business that will honor and uplift this historical treasure and not just some big box developer trying to make a quick buck.

The building is a great piece of history from the old South End.
We actually just repaired the front stairs and restored the wrought iron railings as they were in disrepair the last few years.
A new roof restoration was done about 15 years ago. The building as a whole is as solid as it was when it was built. It amuses me that many people comment about it's "disrepair" and "pieces falling" when in reality, it's mostly cosmetic issues that are not an issue for Public Safety.
GREAT ARTICLE! JM LoRusso

Thank you! I enjoyed reading this. I like the idea of a Community Center or Arts Center. Perhaps a music venue. The South End could surely benefit from such a place. I look forward to seeing what ensues.