An Early History of Champagne: Part 1 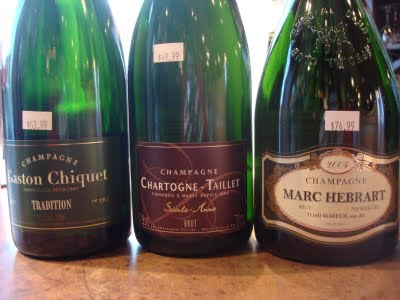 In some respects, the history of Champagne is only about 340 years, since the alleged invention of the sparkling wine called Champagne by Dom Pierre Perignon, a Benedictine monk. But, the history of the Champagne region extends back over 2000 years, and all of that history has had its impact on the present. Most articles you find about Champagne history often start around the time of Dom Perignon, or if they begin before that, they only provide a very brief overview. I want to fill in that gap, to go back to the beginning, to discover in more depth what happened many centuries before Dom Perignon was ever born.

Let us begin with a brief lesson in etymology, the origin of the term champagne. The Latin term campus, which means "field," is the root for the Latin term campania, which means a "plain." This term was originially used to refer to the lands of the Champagne region, and the French eventually altered campania into their own word champaign, which would later be revised to champagne.  There is an alternative theory as well. Some believe it may derive from the Celtic kann pan, which means "white country." That would apply to the numerous white, chalky outcroppings in the Champagne region.

It would not be until around the 12th century that there would be the first mention of a province of "Champagne,” but soon after that, the term became more commonplace. It would also not be until 1493, that a specific reference to the “wine of Champagne” would be seen. Before then, the wines were known by the village of their origin.  Interestingly, La Champagne, which refers to the province, is feminine in French, yet le champagne, which refers to the sparkling wine, is masculine.

There is some controversy over who planted the first vineyards in the Champagne region, though there is fossil evidence supporting the fact that there were some indigenous vines in the area. There is some evidence that the ancient Celts of Gaul produced wine, but it seemed to be a minor industry, and the quality was unlikely too good. Around 121 B.C., the Romans began their invasion of Gaul, and the conquest would be completed by Julius Caesar around 52 B.C. This conquest would initiate a significant wine industry in Gaul.

During this conquest period, and afterwards, the Romans planted numerous vineyards in Gaul, starting in the south and working their way north. Though there is limited evidence that the Romans planted vines in Champagne, it is known that the Romans quarried stones from the area of Reims, and would have realized that the south slope of the mountain possessed ideal characteristics for vines. Before the Romans arrived in Reims, the city had been founded as Durocortum (which means "round fortress") and was the capital of the Remi, a Belgic tribe. The term "Remi" means the "dominant ones" and the term would be the source for when the city was renamed as Reims.

The wines of the Romans seemed to be very desirable to the Gauls, who would often pay great sums to purchase it. It is even thought that a number of Gauls joined the Romans, in part, for easier access to their wine. But some of the northern tribes of Gaul were much warier, believing that the Roman's wine was in fact a trap, designed to dull their military prowess. It is also during this time that Pliny the Elder, a naturalist who wrote about wine, lauded the wines of the Reims region, which were then known as the wines of Ay. The wines of Ay would continue to be renowned throughout the centuries.

When Mount Vesuvius erupted in 79 A.D., it destroyed some of Rome’s best vineyards so when Emperor Domitian came to power, he issued an order to replace large regions of land in the provinces that were currently devoted to cereal crops with vineyards. That eventually backfired, as Rome later faced food shortages due to a lack of sufficient cereal crops. Thus, in 92 A.D., Emperor Domitian had to issue a reversal, ordering that all, or at least half, of the vineyards in Gaul be uprooted, so they could be replanted with cereal crops. Though numerous vineyards were uprooted, not everyone obeyed the Emperor's edict. In addition, some Romans found a loophole, as any land owned by a Roman citizen could technically be declared Roman land, and thus not part of the province and exempt from the law.

The law would remain in power, though often with limited impact, for nearly two hundred years, until 280 A.D., when Emperor Probus, the son of a gardner, repealed the law. Probus exhorted the people: “Citizens, plant vines and grow rich.”  He also ordered some of his own soldiers to assist in planting vineyards, including in the Champagne region near Reims and Châlons. Roman law also dictated that it was a crime for anyone to attack or damage someone else's vineyard. Thus, the Champagne region began to thrive, and Romans showed how much they loved the fruit of the vine.

But a new threat to the Champagne region would come, in the form of a near invincible foe, Attila the Hun, the Scourge of God. The Huns were a nomadic, barbarian tribe from the East which would invade the Roman Empire, posing a dire threat. Around 451 A.D., Attila and his horde invaded Gaul, yet they would face the combined resistance of the Roman General Flavius Aetius and the Visigoth King Theodoric I. The decisive moment of this offensive was the Battle of the Catalaunian Plains, also known as the Battle of Châlons sur Marne, which took place in the Champagne region during September 451 A.D.

Fortunately, the Roman-Visigoth alliance defeated Attila, handing him the only defeat of his military career. Though an exact body count is not known, it has been said that potentially 100,000-300,000 men lost their lives in that battle, including King Theodoric. After this loss, Attila withdrew from Gaul and never returned. Interestingly, Attila allegedly had a prior warning of his defeat, on the morning of the battle. After divining the entrails of a sacrifice, Attila's prognosticators foretold disaster for the Huns in the upcoming battle. Despite this warning, Attila went ahead anyways, though in hindsight it seems he should have listened to them. What would the Champagne region be like if Attila had won the battle, and retained control of the lands?

Though Rome was able to defeat Attila, their control over Gaul would soon vanish. In 454 A.D., only three years later, General Aetius, who had been instrumental in the defeat of Attila, would be slain on the orders of Emperor Valentinian III. Gaudentius, the son of Aetius, had married Placidia, the Emperor's daughter, but the Emperor worried that Aetius wanted to usurp him, and place Gaudentius on the throne. One year later, the Vandals would plunder Rome, furthering the decline of their once mighty empire. Rome's control over Gaul began to slip, making it vulnerable for conquest.

One of the Roman allies against the Huns had been the Salian Franks, a Germanic tribe which had been permitted to live on Roman land. It would be they would who best capitalize on Rome's weakened control over Gaul. In 481 A.D., Clovis I, only fifteen years old, succeeded his father and became king of a tribe of Salian Franks. During the next fifteen years, he would unite all of the kingdoms of Salian Franks, and seize control of Gaul, defeating Syagrius, the last Roman official in Gaul.

Prior to his final military successes, Clovis had married Clotilde, a Christian, and she often urged Clovis to pray to God as well as to convert from his pagan ways. She was finally successful, convincing him to take a vow to convert if God would allow him to defeat his enemies. After Clovis succeeded in conquering Gaul, besting his enemies, he made good on his vow, a momentous historical event.

St. Remigius, also known as Remi or Remy, was the Bishop of Reims for 74 years, until 533 A.D. Legend states that he performed a number of miracles involving wine and his feast day is October 1. It would be he who would baptize Clovis as a Christian. On December 24, 496 A.D., Clovis and about 3000 Frankish soldiers arrived in Reims to be baptized.  There is a legend that it was so crowded with people that Remigius was unable to reach the holy oil he needed for the baptisms. But a white dove suddenly appeared, grabbed hold of the oil with its claws, and brought it to Remigius so he could complete the ceremony.

There was a great feast to celebrate the baptism, and Clovis and the Franks enjoyed some top wines produced from Remigius’ vineyards. It is likely that these were still red wines. It should be noted that Remigius apparently used slaves in his vineyards, some of whom he freed upon his death.  This feast also began the association of the wines of the Champagne region with royalty, which would continue throughout the centuries as numerous kings would later be coronated in Reims.  The Franks enjoyed their wine, and even adopted the Roman law that prohibited people from damaging their neighbor’s vineyard.