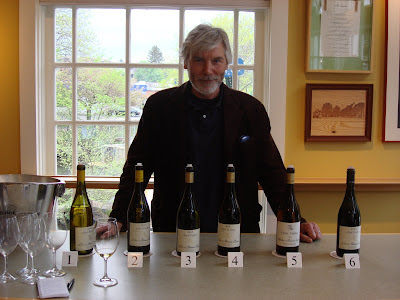 On May 15, the Lower Falls Wine Co. held a special wine tasting with Ferdinando Zanusso of I Clivi, who makes organic wines from the Friuli region of Italy. Eileen of Adonna Imports was there too, as they are the local distributor for the I Clivi wines.

"I Clivi wines are produced from old vines grown in ancient vineyard parcels in Friuli, the small "ear" that juts out from the Northeast corner of Italy. Ferdinando practices organic farming, low yield cultivation and minimal cellar intervention to allow the land to speak directly through the wines. His total production is only 2000 cases and he is committed to releasing the wines only when they have achieved sufficient maturity. The results of this passionate, nurturing, land-based approach are wines of gorgeous purity and finesse."

For more information on I Clivi, you can check out their website. You can also check out articles in Mondosapore and Oenologic.

I found Ferdinando to be almost shy, or at least very humble about his wines. Though when he did speak, his passion was evident. I think that maybe he prefers the wines to speak for themselves.

We began the tasting with a 2002 Clivi Brazan Bianco. This wine is mostly made from Tocai Friuliano and a small portion of Malvasia Istrianna. The vines are at least 60 years old and the wine sees no oak at all. It is a low production wine and made organically. The wine had a nice yellow color with a nose of spice. On the palate, the spice notes predominated though there were subtle fruit flavors flowing through the taste. It had good acidity and definitely would be an excellent food wine. With the spicy notes, it is a more unique white wine, rather than the same old citrus flavors you get in many other whites.

The 2003 Clivi Galea Bianco is mostly made from Tocai Friuliano and a small portion of Verduzzo. Like the Brazan, the vines are old, generally 40-60 years, and the wine sees no oak at all. It is a low production wine and made organically. The wine also had a very bright yellow color though the nose gave more of a honey smell. On the palate, the wine was dry and the honey flavors predominated though they were more subtle. There was some spicy notes as well mixing with the honey. It had a long, lingering finish and I was very impressed with this wine. It certainly had character.

The 2002 Clivi Galea Bianco comes from a bit of a cooler vintage. So, it was a bit fuller in the mouth and I found more mineral notes in the wine, mixing with the honey flavors. The honey flavors were a bit stronger than in the 2003. The honey flavors only gave it a hint of sweetness. Definitely nothing cloyingly sweet. It was very interesting to see the differences in the vintages. I very much enjoyed this wine as well.

The 1999 Clivi Galea Bianco was my favorite wine of the tasting. The weather was similar in this vintage to 2003 though they used a bit less Tocai in the 1999. This is a more concentrated wine, full bodied with lots of delightful honey notes, a touch of spice and even a bit of minerality. A very complex wine that just tantalizes your palate. This would make a great pairing with foie gras. This wine, as will all of these whites, should last at least twenty years. I had to buy a couple bottles of this wine.

I was not as impressed with the 1997 Clivi Galea Bianco. It came from an ordinary vintage, nothing unusual about it I found this to have a bit of a musty nose though that did not extend to its taste. On the palate, it was a dry wine with some honey and minerality but it seemed maybe a bit tight and restrained. It may have needed time ot breathe to fully appreciate it. It was a decently tasting wine but I don't think it was showing its true potential.

We ended the tasting with the 2000 Clivi Galea Rosso. This wine is 100% Merlot from vines that are 50-60 years old. It sees some aging in used French oak. This was certainly one of the better Merlots I have had in quite some time. It was smooth with bright cherry flavors enhanced by a touch of spice. Another wine with character that elevates it above the usual suspects. If you enjoy Merlot, then you definitely should check out this wine.

Once again, Lower Falls and Adonna Imports have put on an excellent wine tasting of delicious and unique wines. I definitely recommend you check out I Clivi wines!