A Glimpse Into The Culinary Treasures of Frederick, Maryland 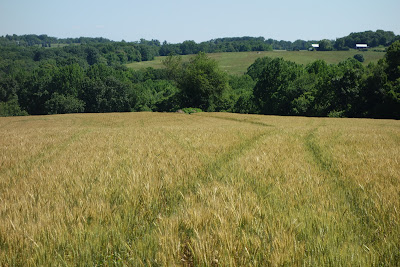 We flew down to Maryland the day before TasteCamp 2017 was scheduled to begin, so we had some free time to explore the city of Frederick. The downtown area is filled with a myriad of shops and restaurants, as well as some interesting architecture and museums, such as the National Museum of Civil War Medicine. There are parts of Frederick with many chain shops and restaurants but the downtown is more unique, small businesses. 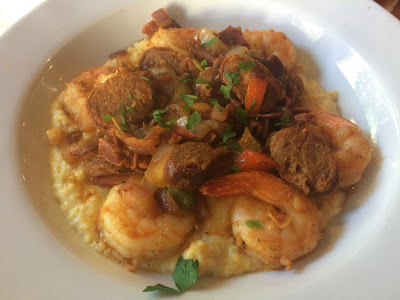 For breakfast, we ate at Cafe Nola, kind of a hip cafe with an outside patio. It is well known for its breakfast offerings, some with a southern flair. The breakfast entrees generally range from $10-$18, including items such as French Toast, Croissant Sandwich, and Corned Beef Hash. They have a fully stocked bar so you can enjoy a cocktail such as a Bloody Mary Heat ($8), which is made with a house-infused habanero garlic vodka.

I opted for the Shrimp & Grits ($15), which is made with cheddar grits, Andouille sausage and bacon. The grits were creamy and cheesy and there plenty of plump shrimp, spicy sausage and crisp bacon pieces. A hearty dish, excellent comfort food. 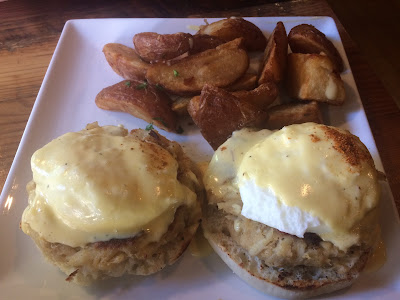 We also ordered the Chesapeake Benedict ($18) which consists of jumbo lump crab cakes, atop English muffin and topped by poached eggs and an Old Bay hollandaise sauce, with a side of roasted potatoes. The crab cakes were very good, filled with plenty of sweet crab and not lots of filler. The hollandaise was interesting with the Old Bay, complementing the crab cakes. The potatoes were also nicely crisp. Again, another good breakfast choice.

My only issue with the restaurant was that the service was a bit lackluster, especially after we received our food. Our server didn't return until we were nearly down with our meal, failing to refill our beverages. The restaurant wasn't significantly busy and there didn't appear to be any reason for the lack of proper service. It could be outside the norm. The food though is definitely very good and I would recommend you check it out if you are ever in Frederick. 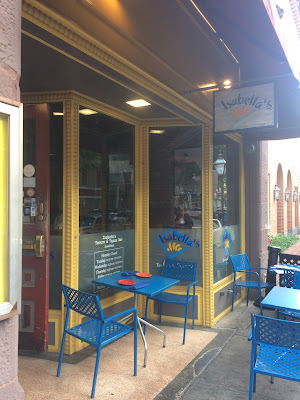 For dinner, after considering a number of potential choices, we opted for Spanish cuisine at Isabella's Taverna & Tapas Bar. It is a casual spot with a large bar (and has a Happy Hour tapas buffet for those at the bar). They have a full bar though the wine list wasn't too compelling to me, as they had only a small amount of Spanish wines, as well as plenty of other wines from numerous wine regions across the world. Though small, there were some good choices in Spanish wines but in the end, we opted for red Sangria, which was fruity and tasty, though not overly sweet.

The food menu was more interesting, and accompanied by a page of daily specials, with some traditional Spanish dishes as well as some of their own takes on tapas. On the menu, you'll find Soups & Salads (like Gazpacho), Cheeses (like Queso de Cabrales), Seafood (from Fried Calamari to Pan-Steamed Black Mussels), Meats (from Iberico de Bellota to House-Made Chorizo), Vegetables (from Papas Bravas to Brussel Sprouts), six different types of Paella, and a few Entrees (like Grilled Sirloin). Prices are reasonable, with a number of dishes costing $10 and less. 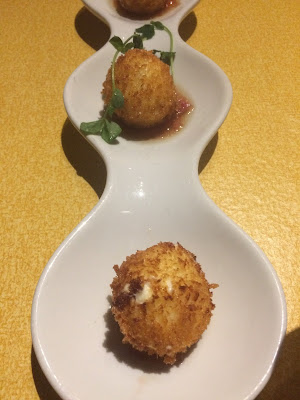 The Queso Frito con Alemendras y Salsa Vinagreta ($6.75) consists of three balls of fried house-breaded goat cheese & almond fritters with a tangy shallot vinaigrette. The crispy coating led to a creamy goat cheese center, accented by crunchy pieces of almond, with a bright acidity from the vinaigrette. Quite tasty and a pleasant way to start our dinner. 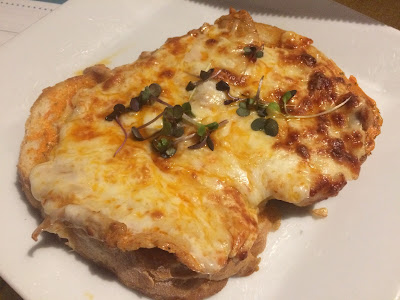 The Manchego Frito ($12) was made of a slice of baguette, topped by plenty of fried Manchego cheese, fig jam, and pear. The melted Manchego was delicious, with a mild tang and nuttiness, and was enhanced by the sweet fruit of the fig and pear. Another very good choice. 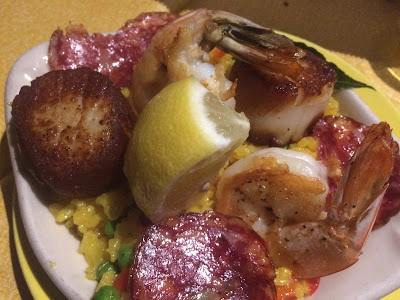 The special Paella del Dia (Tapas portion/$26) was made with cured Iberico ham, scallops, shrimp, peas, and pimento. The scallops had a crisp sear and were moist and tender, while the plump shrimp had more texture to them and the Iberico was slightly spicy. The rice was cooked nicely and I was impressed with this version of Paella, and I would have liked to order one of the entree sizes as well. 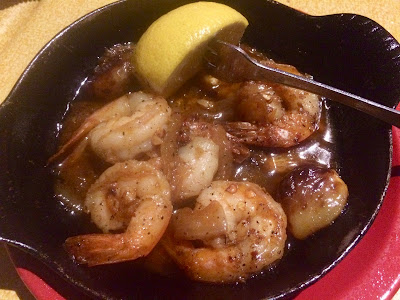 The Gambas al Pil Pil ($8.25) is a dish of hot sizzling shrimp in a spicy garlic oil with caramelized onions. Usually, I don't see onions in this dish, but they added a bit of sweetness to the spicy oil.  It was nice to dip our bread into the dish and sop up the oil. 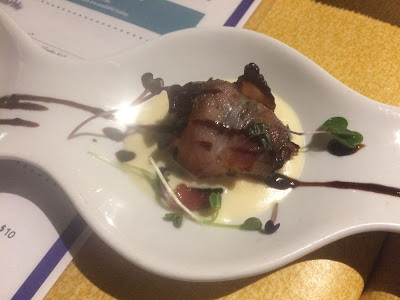 The Datiles Rellenos ($9) were crispy bacon wrapped Spanish dates stuffed with chorizo and sitting atop a mild goat cheese cream. Salty and slightly sweet, with creaminess from the goat cheese, this was a more decadent dish. A nice blend of flavors and textures and I strongly recommended this dish. 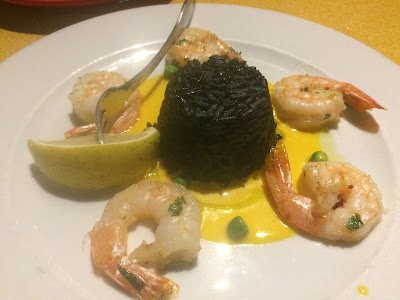 Service was excellent and I was very pleased with all of the dishes we ate. There was plenty of other items on the menu I would have liked to try too. I just wish the wine list was larger, with more Spanish options. Overall, Isabella's earns my recommendation.
Posted by Richard Auffrey at 3:00 AM