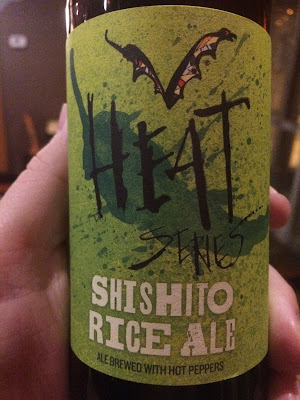 I've found a new beer that appeals to me!

As my readers well know, that is a rare occasion, as the bitterness of many beers turns me off. While at TasteCamp 2017 in Maryland, we had an impromptu BYOB at our hotel one evening. Todd Godbout, the writer of Wine Compass, brought a beer which he thought would appeal to my preferences, the "Heat Series" Shishito Rice Ale from the Flying Dog Brewery in Maryland.

The Flying Dog Brewpub was established in Aspen, Colorado in 1990, and in 1994, became a distillery in Denver. In 2006, they purchased a brewery in Maryland, which turned out to be such a success that they decided to close their Denver brewery. They are now the largest brewery in Maryland, producing a wide variety of different beers.

One of their seasonal offerings is their Heat Series, "a radical exploration of brewing with hot chilies, ..." Currently, that series includes four beers, the Cherry Bomb Gose, Chocolate Habanero Stout, Experimental Pepper IPA and the Shishito Rice Ale. I only had the opportunity to taste the Shishito Pale Ale, though I am intrigued by the idea of the Cherry Bomb Gose.

The Shishito Pale Ale is produced with the Speciality Malts of brown rice, carapils, biscuit and acidulated, as well as the Saaz Hops and two Yeasts, Sake and Ardennes. It is also brewed with Shishito peppers, a generally sweet Asian pepper where about one in ten is spicy. This Pale Ale has a 5.3% ABV and 20 IBU.

I found this beer to be light, crisp and refreshing, lacking bitterness and with just a whisper of spicy heat, mainly on the finish. There are some subtle malty undertones and a couple hints reminding me of a Sake. It would be an excellent beverage on a hot, summer day. If you dislike most beers, especially due to their bitter nature, I strongly recommend you give the Shishito Pale Ale a try and I think you will find that you enjoy it.

Much appreciation to Todd for introducing me to this tasty beer.
Posted by Richard Auffrey at 3:30 AM