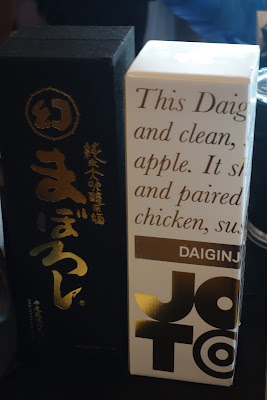 1) Sake on the auction block? In Billionaire and Stir Public Relations, there are new articles mentioning that on June 10, an auction was to be held by Acker, Merrall & Condit (AMC) in Hong Kong. As a first, four Sakes were added to the auction list, all which had scored highly in the Wine Advocate. The four Sakes included Kameno-O Sannen Jukusei Daiginjo (98 points), Iwanoi Yamahai Junmai Daiginjo (95 points), Kinteki Junmai Ginjo (91 points) and Manazuru Junmai Daiginjo (90 points). The first two Sakes are estimated to garner from $1,000 to $3,200 each. The AMC site hasn't listed the winning bids yet.

Are these collectibles which will acquire the same cachet as fine Bordeaux or Burgundy? I think that is very unlikely as Sake isn't generally produced to be aged. For most Sake, it will last about a year or so after release. If these Sakes at auction are purchased, they would need to be consumed in a relatively short time period unlike fine Bordeaux and Burgundy. You couldn't store this Sake in your cellar for ten years and be certain it would still be palatable. Sure, there will be plenty of wealthy people who purchase these Sakes right now, just because they received high points and are seen as desirable, but once they realize it can't age well, then maybe the desire for such expensive bottles will diminish.

2) Ice cold Sake for the summer? The Mainichi has published an article about a new Sake that is supposed to be served at a sub-zero temperature. Ishii Shuzo Co. produced this Sake which will be sold with a special cooler bag intended to keeps the Sake at a temperature of minus 2 degrees Celsius. The Sake, a Junmai Ginjo, is referred to as yukidoke ("melting snow") as allegedly the Sake in your mouth will remind you of melting snow. Sake consumption in Japan declines during the summer so the brewery wanted to do something to combat that decline. This Sake, which goes on sale in July, will cost about $60 U.S. but appears that it will only be available in Japan. I am intrigued though it is going to be difficult to acquire one of these unique bottles.

3) A Sake brewery in the UK? Southwark News has reported that the first Sake brewery in the U.K. is set to open soon. Named Kanpai, the brewery is owned by Lucy Holmes and Tom Wilson, who will soon get married to each other. Their first batch of Sake will be about 600-700 bottles and will be available at the Selfridges department store and the Hop Burns and Black Craft Pub. They will start with a Junmai and a Nigori, and also are attempting to crowd fund for additional monies for their brewery. It is exciting to see new Sake breweries sprouting up around the world.

4) A Sake brewery in France? The Asahi Shimbun reports that two French brothers, Christophe and Stephane Fernandez, are currently working at the Komatsu Syuzoujou Sake brewery in Usa’s Nagasu district in the northeastern part of the Kyushu region. As they learn about how to brew Sake, their ultimate goal is to produce Sake in France using French rice next winter. The Sake they have started making in April should be available in France in the fall. "They aim to create a sweet and sour taste with 13-percent alcohol content, relatively low for sake, for their “junmaishu” that will go well with cheese and dessert." Seems Europe is seeing a small boom in new Sake breweries.
Posted by Richard Auffrey at 3:00 AM

Richard, I recently wrote a blog post about the very topic you mention at the beginning of your post. I've noticed a lot more sake articles in the news recently, but always with common mistakes or misinformation. As you say, I hope people will start fact checking.