As Summer arrives, and temperatures rise, many people opt for a chilled white wine, either on its own or paired with food, from chicken to seafood. You have plenty of options for white wine from all over the world, from Portuguese Vinho Verde to Alsatian Riesling, from Sicilian Grillo to Georgian Rkatsiteli. You also should consider whites from Spain, which can be affordable and delicious, and I have two specific recommendations for you today.

Back in 1999, José Miguel Arambarri Terrero started a winery in Spain, eventually enlisting the assistance of his sons, Ricardo and José Miguel. They eventually expanded their operations, adding wineries, and are now producing wine in 15 Denominations of Origin (D.O). Their overall company became known as Vintae and they export many of their wines to the U.S.  I've written about a few of their wines before, finding them excellent values, and the two wines I'm recommending today fall into that category as well. Please note that both of these wines were media samples. 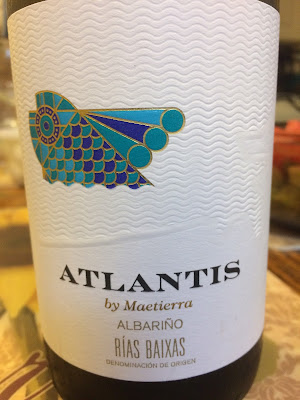 The Atlantis line, launched in 20015, consists predominantly of white wines, from different D.O., which are influenced by the Atlantic Ocean. However, the Atlantis line does include a single red, a Mencia from  the Bierzo D.O. I recently sampled the 2016 Maetierra Atlantis Albariño ($12), from the Rias Baixas D.O., which is made from 100% Albariño, undergoes stainless steel fermentation, sees no oak and is only 12.5% ABV. I enjoyed this wine with some Shrimp Scampi and even used some of the wine to make the sauce.

With a light golden color, the wine presented an appealing, fruity aroma and on the palate, it was crisp, dry and delicious. There were tasty flavors of apple, melon and pear with a medium-body and a pleasing finish. An easy drinking wine, it presents with more complexity than many other wines at this price point. It is enjoyable on its own, a perfect summer sipper, but also pairs well with lots of different types of seafood, from mussels to lobster, or light chicken dishes. It was a big hit with the other guests and it didn't take long before the bottle was empty. 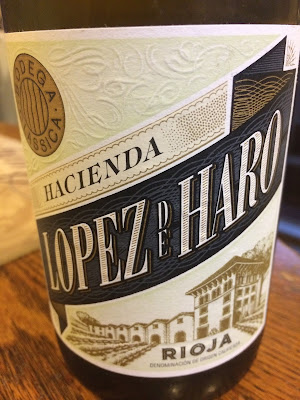 Bodega Classica, located in the village of San Vicente de la Sonsierra, produces Hacienda Lopez de Haro, a Rioja line launched in 2003, which was named after Diego Lopez de Haro, the founder of the city of Bilbao, and his descendent, as 12th century lieutenant in Castille. Their wines are produced using traditional Riojan winemaking methods and the grapes comes from some older vineyards, with some being over 100 years old.

The 2016 Hacienda Lopez de Haro Blanco ($10) is a white Rioja, made primarily from old vine Viura with some other grapes which are not identified. It is matured for about three months in French oak and has a 12.5% ABV. I found this wine to have a lighter golden color than the Albariño and a more floral nose, accented by some tropical fruit flavors. On the palate, it was crisp and dry with bright lemon notes, a mineral backbone, and some floral accents. It seems a little leaner than the Albariño, with a pleasing finish, and it too worked well with the Shrimp Scampi. It is also enjoyable on its own, a perfect summer sipper, but will pair well with lots of different types of seafood, from mussels to lobster, or light chicken dishes.

Both wines are excellent values which would be great for the summer, though they can be enjoyed year round too. Spain delivers once again on delicious and inexpensive white wines.
Posted by Richard Auffrey at 3:00 AM