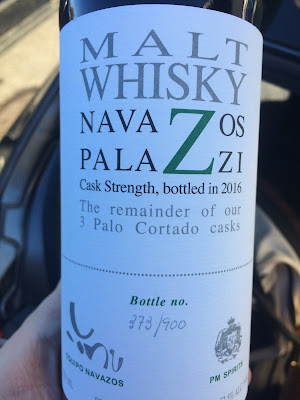 When you think of whiskey, one of the last countries that probably comes to mind is Spain, despite the fact that they have been producing whiskey since the 1960s. It was only recently that I had the opportunity to taste a Spanish whiskey and I was thoroughly impressed, considering it one of my new favorite whiskies.

Let's start with a little history. In 1958, businessman Nicomedes García Gómez formed Destilerías y Crianza del Whisky S.A. (Whisky DYC), a Spanish distillery and it started producing whiskey in March 1963. During its first year of operation, it produced about one million liters and by the 1980s, that amount increased to about 20 million liters annually. In 1989, the company was sold to the Pedro Domecq Group  and then later sold to Beam Suntory. The company currently operates two plants, producing only about 2.3 million liters annually, though they still have the capacity to distill much more.

And now let's touch on the recent past. While perusing the shelves at Julio's Liquors in Westborough, I stumbled upon the Navazos Palazzi Malt Whisky ($114.99), a Spanish whiskey that was aged in Sherry barrels. It intrigued me, especially as I knew that Equipo Navazos bottled some amazing Sherries. I figured that if they were involved in this whiskey, then it was likely going to be very good so I took a chance and purchased a bottle, which would turn out to be a very smart buy.

I would later learn that Jesus Barquin & Eduardo Oreja of Equipo Navazos chose to partner with Nicolas Palazzi of PM Spirits’ to produce a series of Spanish spirits, including brandy, rum, grain whiskey and malt whiskey. This Malt Whiskey was produced in the DYC distillery, using malted barley that was grown in Spain. It was distilled in a traditional pot still, being released at cask strength, 52.5% proof. Only 900 bottles of this whiskey were produced.

What helps to make this whiskey unique is that it spends all of its time in the barrel, about four to six years, in three Palo Cortado Sherry casks from Valdespino. Other whiskies may be finished in Sherry casks for a short time, but few, if any other, spend all of their time in Sherry barrels. In addition, few whiskies spend time in Palo Cortado barrels because it is a rarer Sherry, and also happens to be one of my favorite Sherry types.

This Malt Whiskey presents with a nice, dark amber color and its complex aroma is enticing, a blend of harmonious fruits and spices. You could easily sit and enjoy the diverse nose of this whiskey for quite some time before taking a sip. However, when you do sample it, your palate is going to be seduced by the complex, and sometimes subtle, melange of flavors that caress and tantalize. It is sweet, briny and savory, with plenty of fruit, from apples to raisins, as well as lots of spicy notes. Honey, caramel, and malt with clear Sherry notes and a long and lingering finish that satisfies to the last wispy taste. It is elegant and compelling, unique and delicious, a well-balanced whiskey that will surprise and delight. My highest recommendation!

If you are a whiskey lover, you need to explore what is now coming out of Spain, especially the releases from Navazos Palazzi. I've heard of other Spanish wineries that starting to produce whiskey too. This could be the beginning of an intriguing whiskey industry in Spain.
Posted by Richard Auffrey at 3:00 AM

Thanks for the review. What foods, in your opinion, would pair accordingly?