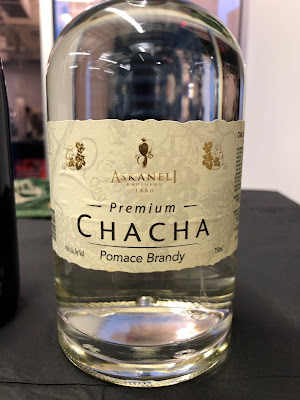 In the legends of the country of Georgia, wine was a gift from God while chacha, a pomace brandy, was a creation of the devil.

It's said that God created wine to remind Georgians of the wonders of heaven, and he first shared wine with all of his angels, as well as the devil. Though they all enjoyed the wine, it motivated the devil to try to compete with God and create his own alcoholic beverage. The devil created chacha, a potent spirit, and let God sample the fiery beverage. God finally declared that if Georgians drank three glasses or less of chacha, they remained with him, but if they had a fourth glass, they belonged to the devil.

As Georgians love to drink, they came up with a way to avoid falling under the influence of the devil. They simply drink chacha rapidly, in quick shots, so the devil won't be able to keep track and count how much they actually drank.

Chacha is a Georgian pomace brandy, similar in many respects of Italian grappa, though it is sometimes called Georgian "vodka." Pomace consists of the leftover skins, pulp, and seeds from the winemaking process. The origins of chacha are murky, with some claims that it has existed for about 1000 years in Georgia. It was commonly made in makeshift stills at homes and generally wasn't commercially produced until the 20th century. It is potent, often with a 40-60% ABV, and sometimes is aged in qvevri or oak barrels. For centuries, it has been claimed that chacha has medicinal properties, a remedy for a long list of ailments.

Chacha is still very much a niche spirit outside of Georgia. During the period of January to July 2018, Georgia exported only 219,500 bottles of chacha, though that was a 114% increase over the similar period a year before. Chacha is available in Massachusetts, and you'll find some single-varietal versions, such as Saperavi and Rkatsiteli. At a recent Georgian business event, I had the opportunity to taste my first chacha, and I hope to taste many more in the future.

The Askaneli Brothers Premium Chacha (about $22) is produced by a company with roots extending back to 1880, though its modern existence started around 1998. They own vineyards in the regions of Kakheti and Guria, producing wine and chacha. Made in the Kakheti region, this chacha matured in oak barrels for at least 12 months, and is filtered, which accounts for its colorless nature. With a 45% ABV, this chacha has an intriguing floral aroma and was surprising smooth and mild on the palate, with only a minor alcoholic bite. It possessed pleasant and more subtle flavors of hazelnut and citrus with floral accents. It was elegant, with a fairly long finish, and is definitely a very good value at this price. It is certainly not harsh like I've found in some similarly priced grappas. A hearty recommendation.

Have you tasted chacha before? What were your thoughts? Do you have any recommendations?
Posted by Richard Auffrey at 2:30 AM