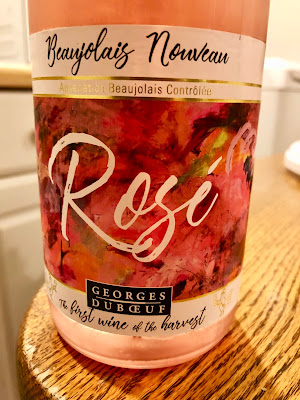 Some people feel that Beaujolais Nouveau is simple to produce, and thus show disdain for this "first wine" of the vintage. However, earlier this year, Romain Teyteau, the North America Export Director for Les Vins Georges Duboeuf, told me that Beaujolais Nouveau is actually a complicated wine to produce, as it requires many consecutive hours of production, with the use of 24 hour shifts. There is so little time for error so everything must be done perfectly, to ensure the success of production.

Last week, on Thursday, November 15, it was Beaujolais Nouveau, which is celebrated annually on the third Thursday of November when French law allows the release of this "first wine" of the harvest. I received a media sample of the 2018 Les Vins Georges Duboeuf Beaujolais Nouveau Rosé, sampling it over the weekend.

This year, for the first time, Les Vins Georges Duboeuf has exported to the U.S. a Beaujolais Nouveau Rosé. This wine is made by the same winemakers, Emeric Gaucher and Denis Lapalu,  which make their regular Beaujolais Nouveau. "Rosé's lighter, fresh profile is similar to the description of Beaujolais Nouveau, so it's no surprise that the Gamay grape would be a natural to produce high quality Rosé. They seek Gamay grapes for the Rosé which possess a slightly high acidity, allowing the wine to possess a "fresh mouthfeel."

The label for this wine, which is on all of this year's Beaujolais Nouveau labels, depicts an abstract oil painting, called Foolish Pleasure, that was created by a Nashville, Tennessee native Chloe Meyer, who won, out of a field of over 680 entries, the Georges Duboeuf Artist's Label Competition.

The 2018 Les Vins Georges Duboeuf Beaujolais Nouveau Rosé ($13.99) is made from 100% Gamay, has a 12.5% ABV, and about 10,000 cases were imported into the U.S. With a bright pink color, this wine had a nose of bright red fruit, and on the palate, those red fruit flavors, especially strawberry and cherry were prominent, though with minor notes of citrus too. It was dry and crisp, with some underlying minerality, and had a pleasing, though short, finish. Easy drinking, it is an excellent food wine and would fit well on your Thanksgiving table. I paired it with some Crab Ravioli, in a white wine & garlic sauce, and it went very well together.

Grab a bottle of the new Beaujolais Nouveau Rosé quickly as it wont be around long.

Posted by Richard Auffrey at 8:45 AM