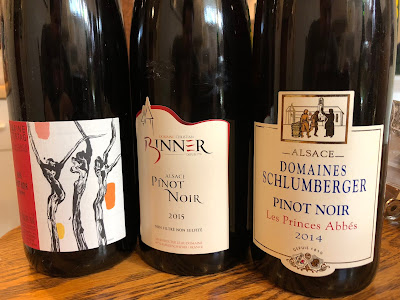 When you think of wine from Alsace, you're most likely to think of their white wines, from Riesling to Gewürztraminer, from Pinot Blanc to Muscat. You might be hard pressed to identify a red grape used in Alsace, though if you're a fan of Crémant d'Alsace, especially their Rosé versions, you might know Pinot Noir is grown there. In fact, Pinot Noir is the only red grape authorized for Alsace AOC Red wines and Rosé.

Don't feel bad if you didn't know Alsace produces Pinot Noir wines. Unfortunately, only about 2,800 cases, a mere drop in the bucket, of Alsace Pinot Noir were imported into the U.S. in 2016. That makes it a very tiny niche wine and it needs to grow and grow, as Alsace Pinot Noir is delicious and compelling, worthy of notice.

Within Alsace, Pinot Noir is planted in nearly 11% of their vineyards, and they produce about 105,000 hectoliters of wine with Pinot Noir, which appears to include Crémant d'Alsace, Rosé and Red still wines. Pinot Noir has a lengthy history in the Alsace region, with some claiming it extends back to the ancient Romans. During the 15th and 16th centuries, Alsace Pinot Noir was even more valued than all of their white wines. For unknown reasons, that changed over time so that their wine wines came to dominate.

Within the various terroirs of Alsace, it has been learned that Pinot Noir grows best in their clay and limestone soils, while Pinot Noir grown in more gravel and sandy soils is best suited for use in Crémant d'Alsace and Rosé. In addition, due to climate change, temperatures in Alsace have risen, making it easier to ripen their Pinot Noir. Some of the best areas to grow Pinot Noir are also designated Grand Cru, but only for white wines. Currently, Pinot Noir cannot be designated as Grand Cru though there are efforts to change this and it seems likely that within several years, Grand Cru Pinot Noir will be authorized.

In general, Alsace Pinot Noir tends to present bright red fruit flavors, crisp acidity, and vibrant freshness. Many are intended to be consumed while young though some have the potential for aging. Oak aging is sometimes used, and when it is, it is more of a light touch, allowing the fruit to take center stage. Curiously, their Pinot Noir is usually bottled  in "flutes," those bottles you most commonly see used for Riesling.

Pinot Noir is often recommended for Thanksgiving, a complement to turkey, and this year I enjoyed three Alsace Pinot Noirs with my Thanksgiving feast. Beside the turkey, we also had a honeymoon roast. All three were excellent wines, as well as each having its own distinctive characteristics. My guests each had their own personal favorite of the three wines, though they too enjoyed all three. This isn't the first time I've tasted Alsace Pinot Noir, but it certainly has provided me even more reason to promote this compelling niche wine.

Please note that two of the Pinot Noirs (the Ostertag and Schlumberger) were media samples while I purchased the Binner on my own. I'm also presenting the wines in order of their vintage, from the youngest to oldest. 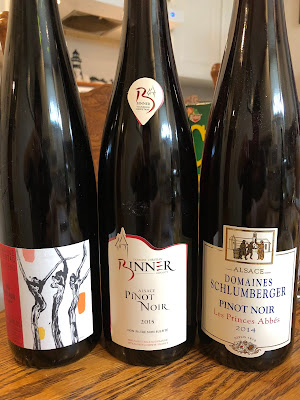 Domaine Ostertag isn't as old as some of the historic Alsace wineries, but it still makes an impact in the region. In 1966, winemaker André Ostertag returned to his family estate and founded Domaine Ostertag. André had previously trained in the Burgundy region, which obviously gave him experience with Pinot Noir. At his family's estate, he improved vineyard management and in 1997, he started instituting Biodynamic agriculture in his 35 acre vineyard. The winery produces three wine ranges, including Vins de Fruit (expressive of the grape variety), Vins de Pierre (expressive of terroir), and Vins de Temps (expressive of overripeness or noble rot).

The 2016 Domaine Ostertag "Les Jardins" Pinot Noir ($27) is made from 100% Pinot Noir, from 20+ year old vines. The wine was aged in stainless steel tanks for about nine months, has a 12% ABV, and is certified Biodynamic. This wine was the darkest red of the three, with an intense aroma of red and black fruits, and a touch of an earthy smell. On the palate, the wine presented with a complex blend of bold flavors, including red cherry, black cherry, and strawberry, with a prominent earthy element, a touch of the savage. Good acidity, with a fairly long and satisfying finish. It especially paired well with our honeymoon roast.

Domaine Christian Binner is nearly 250 years old, having been established in 1770. The estate now owns vineyards in the Kaefferkopf, Schlossberg and Wineck-Schlossberg Grands Crus and other parcels in Ammerschwihr, with most vines averaging 35 years old, and the rest between 60 and 100 years old. It has been sustainable farmed for about 35 years and in 2012, the winery built an eco-friendly winery, whose roof is covered in soil. They produce a wide range of wines, from Crémant d’Alsace to Late-Harvest.

The 2015 Domaine Christian Binner Pinot Noir ($33) is also made from 100% Pinot Noir, with 60% of the grapes an average age of 35-years old and 40% being over 60 years, including some that are over 100 years old. The wine was aged for about 11 months in 100 year old wood vats. It is also certified Biodynamic, unfiltered, has a 13% ABV, and has no added yeast or sulfites. This wine also had an alluring nose of red fruits and earthiness, with a hint of spice. On the palate, it was lighter than the Ostertag, but with a similar flavor profile in many respects, though tending more toward red fruits rather than black ones. It's earthiness was also milder than the Ostertag. A well balanced wine, with a lengthy, pleasing finish, it paired well with the turkey, as well as a the roast.

Domaines Schlumberger got its start in 1810, when a small vineyard was added to their textile business. Since then, the estate has grown significantly, owning over 330 acres in Geubwiller, and also vineyards in the Grands Crus of Kitterlé, Kessler, Saering and Spiegel, making them the largest Grand Crus owner in Alsace. The estate is now operated and managed by the 6th and 7th generations of the Schlumberger family. The estate has about 30 acres of Pinot Noir, with 20% planted in the Grand Cru Saering.

The 2014 Domaines Schlumberger "Les Princes Abbés" Pinot Noir ($25) is produced from 100% Pinot Noir, from vines of an average age of 19 years. The wine is fermented in stainless steel and then aged on the lees for about 8 months in old wooden foudres. This was a wine of silky elegance, of bright, fresh red fruit flavors, a hint of spice, and a wisp of earthiness. Excellent acidity, some floral accents, soft tannins, and a lengthy, pleasing finish. Such a well balanced and delicious wine, it went perfectly with the turkey. And I loved this wine! That elegance was so compelling and its complex melange of flavors pleased me immensely. Highly recommended.

Overall, all three Pinot Noirs were excellent choices, helping to showcase the diversity of Alsace, as well as being illustrative of its terroir and quality. It's a shame so little Alsace Pinot Noir finds its way to our shores and hopefully that will change in the near future. If you love Pinot Noir, I strongly encourage you to seek out those from Alsace. Plus, check out Crémant d'Alsace Rosé, which is also made from Pinot Noir.