Quinta do Vallado: A Douro Winery With A Rich History 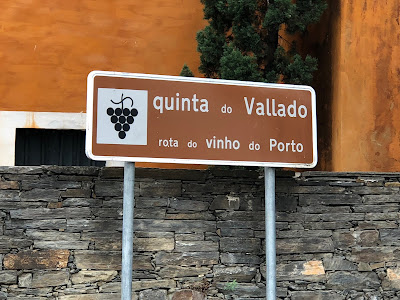 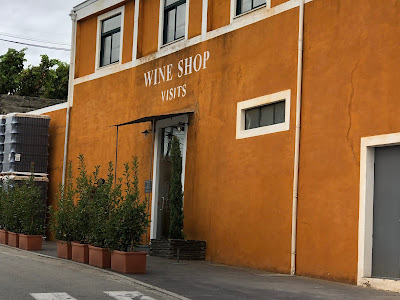 When I received my initial itinerary for my journey to Portugal, I was pleased to see that we were going to visit Quinta do Vallado, a Douro winery that I knew something about. Back in 2014, I tasted and reviewed their 2011 Quinta do Vallado Reserve and I wrote: "Once you sample it, you'll discover a complex and enticing melange of flavors, including ripe plum, black cherry, fig, dark spices, mineral notes and hints of earthiness. Silky tannins, a long and pleasing finish, and excellent structure & balance. It is a hedonistic, delicious wine which will make you crave another glass." I was excited to taste more of their wines, to experience what else the winery had to offer. 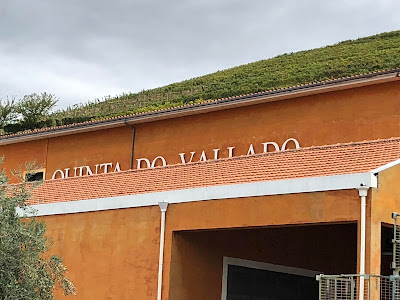 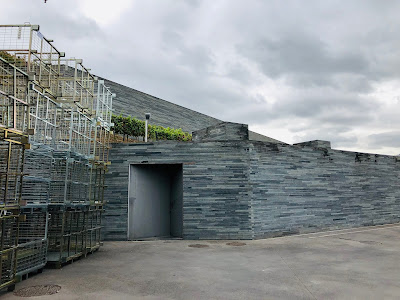 Some of the buildings on the estate of Quinta do Vallado were established in 1716 while the Quinta itself was established in the 19th century by Dona Antónia Adelaide Ferreira (1811-1896), one of the most influential women in the history of Port wine. Her story is fascinating and maybe I'll write an article about her in the near future. Upon her death, she owned almost 30 Douro vineyards, the ownership which passed down to her family. In 1987, most of the Quintas were sold to Sogrape, except for Quinta do Vallado, which remained with the descendants of Dona Ferreira. 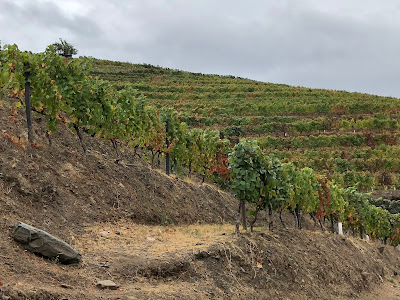 Quinta do Vallado is located on the banks of the Corgo River, a tributary of the Douro. The estate consists of about 70 hectares of vineyards, including 20 hectares of old vines, some more than 90 years old. The vineyards grow about 40 varieties of grapes, and very few international grapes. In 2009, they acquired a 30 hectare organic vineyard, located about 30 kilometers from the Spanish border, and hope to release their first organic wine next year. In addition, they purchase some grapes to fill their needs. 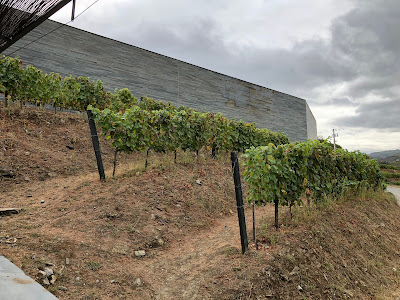 For many years, they sold off their grapes but in 1997 they produced their first wine, making about 30,000 bottles that year. Currently, production is about 1 million bottles (roughly 83,000 cases), divided into 70% Red wine, 10% White wine, the rest being Port and Rosé wines (with future plans to make Aged White Port). About 1/3 of their production is the Vallado Red. They export approximately 50% of their production, to over 40 countries. 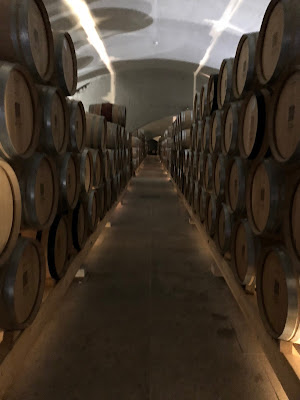 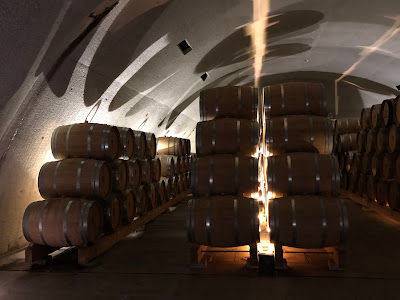 Their cellars have about 900 French oak barrels, including 225 liter for reds and 500 liters for whites, though they age very few whites in oak. They have maybe 4-5 American oak barrels, for maturation of their Tinta Roriz, and also some Portuguese oak for the aging of their Ports, some of the barrels up to 16,000 liters. 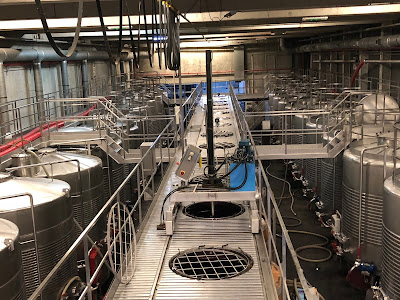 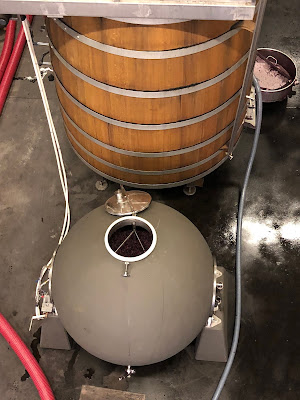 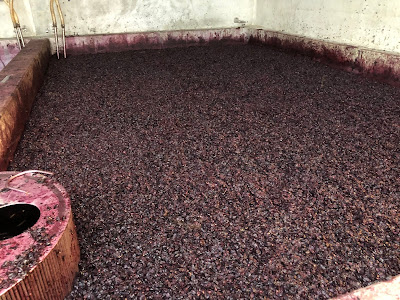 This is one of their lagares, where the grapes are trod by foot. They do this for only a tiny portion of their production, primarily for Vintage Port. 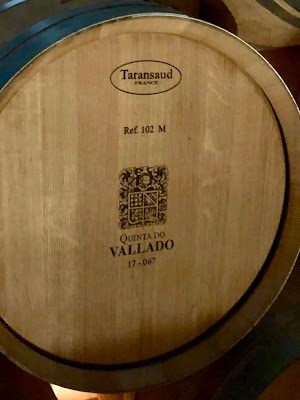 After a tour of the winery, we sat down to taste several of their wines, including four still wines and one Port. And after the tasting, I bought a bottle of their 30 Year-Old Tawny Port. 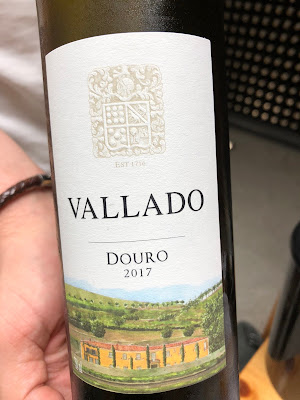 We began the tasting with the 2017 Vallado Douro White (6.60 Euros), a blend of five indigenous grapes including Rabigato, Códega, Viosinho, Gouveio and Arinto. With a pleasing, fruity aroma, the wine was tasty and easy drinking, with citrus and melon notes. A delightful summer wine, or a wine to pair with seafood. 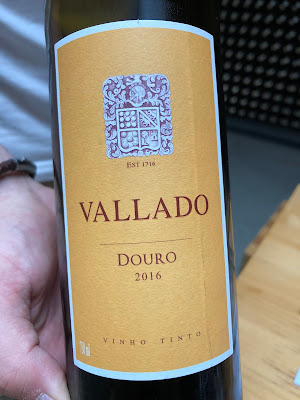 The 2016 Vallado Douro Red (7.15 Euros), their biggest selling wine, is a blend of 25% Touriga Franca,  25% Touriga Nacional, 25% Tinta Roriz, 5% Sousão and 25% mixed old vineyards. About 70% of the wine is aged for 16 months in stainless steel tanks while 30% is aged in 225 liters used French Oak barriques for 16 months. With a nose of red fruit and spice, this was also an easy drinking and delicious wine, with prominent cherry and raspberry notes and spice accents. Low tannins, good acidity and a pleasing finish. A wine for everyday drinking, which would pair well from burgers to pizza.

The 2016 Vallado Touriga Nacional (19 Euros) is made from 100% Touriga Nacional and was aged for about 18 months in French oak barrels, 40% new. Violets were prominent on the nose, and the complex palate presented deep flavors of ripe plum and black cherry with a spicy backbone and silky tannins. An elegant and delicious wine with a lengthy, satisfying finish. 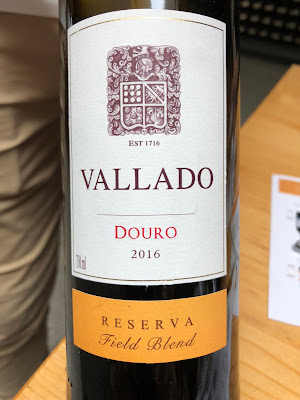 The 2016 Vallado Reserva Field Blend (24.70 Euros) is a field blend of 45 different grapes, all old vines over 100 years old. The wine was aged for about 18 months in French oak barrels, 50% new, and only 4000 bottles were produced. Though it wasn't as good as the 2011 Vintage, which was a great year, it still was a stunning wine, from its alluring aroma to its complex and seductive taste. It is a well-balanced wine, silky smooth and impressive. A great choice and highly recommended. 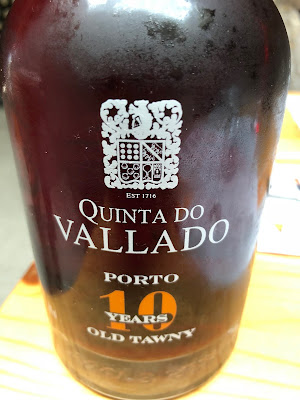 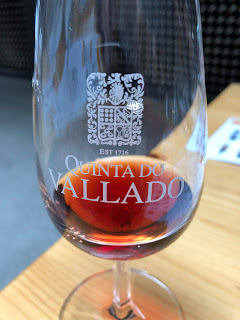 The Vallado 10 Year Old Tawny Port (16 Euros), made primarily from brandy sourced in Portugal, is a nice choice this autumn and winter to warm your soul. The well-integrated and well-balanced Port is sweet, but with plenty of acidity, and has a complex and appealing taste of vanilla, caramel, figs, dates, almonds, and a hint of red fruit. For the price, this is an excellent value Port, one of the best 10 Year Old Tawnies I've tasted. Highly recommended. 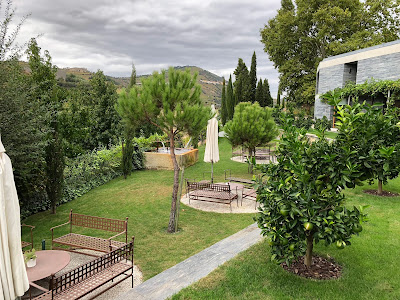 We also enjoyed lunch on the property, as well as getting a look at their hotel, which was opened in 2005. They currently have five rooms available in their Manor House, a refurbished building that dates back to 1733, and right rooms available in their new hotel wing. We checked out one of the rooms in the new wing and it was beautiful and spacious, with a stunning balcony view. And with some prices under 200 Euros a night, it is definitely affordable for such a compelling boutique hotel. There are plenty of amenities available, and they can arrange a variety of tours as well.

When visiting the Douro region, consider staying at Quinta do Vallado,  a quality winery in a beautiful setting, which will be sure to elevate your visit to Portugal.
Posted by Richard Auffrey at 3:00 AM

After I initially commented I clicked the -Notify me when new comments are added- checkbox and now each time a comment is added I get four emails with the identical comment. Is there any way you can take away me from that service? Thanks! online casino games

Very Interesting read. As i go through the article i just kept reading it.
You can visit us at www.bbdevtt.com and enjoy ton of casino games online.