The autumn is always a busy wine tasting season, a great way to get exposed to the diversity of wine, to expand your palate. One of the recent tastings that I attended was hosted by Matt Demers of Quintessential Wines, a wine importing, marketing and sales company owned by father and son, Stephen and Dennis Kreps, and headquartered in Napa, California. Their portfolio includes wineries from all around the world, from Chile to South Africa, and their recent Boston event presented some of their most highly rated wines. I've selected five for special mention, those wines which most appealed to me. 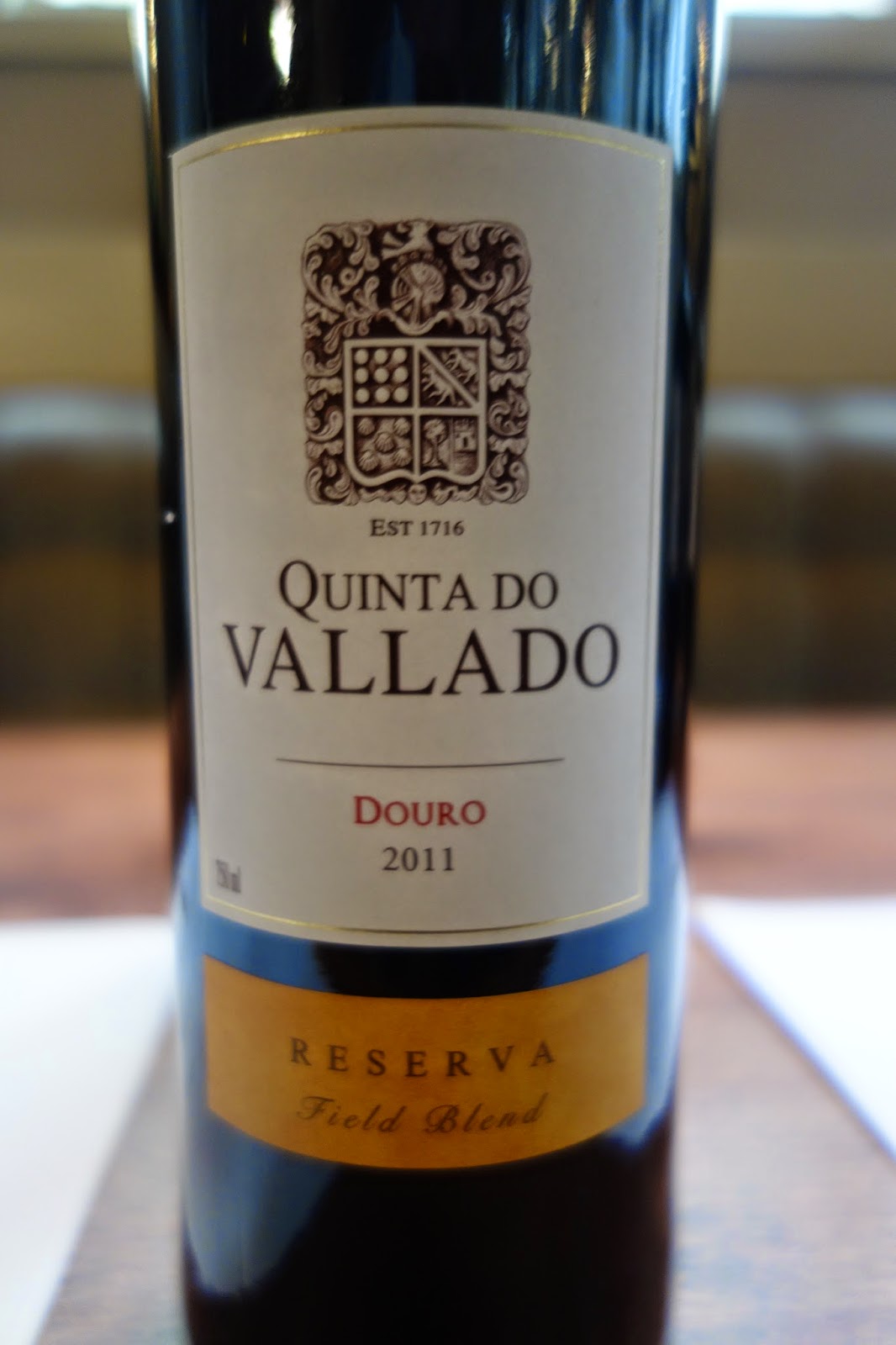 My favorite wine of the tasting was the 2011 Quinta do Vallado Reserve:($64.99), a unique Portuguese blend. The Quinta do Vallado, established in 1716, is located on both banks of the Corgo River, a tributary of the Douro. For much of its history, it apparently sold its grapes, but in 1993, they started producing their own wines. Currently, they have about 70 hectares of vineyards and make still wines and Port. In 2009, they created a new state-of-the-art winery, though they still use some traditional wine making practices, such as foot-treadded grapes in granite lagares.

This wine is a unique mix of a 70% field blend of old vines (about 80+ years old), 27% Touriga Nacional and 3% Sousão. The field blend consists of over twenty different grapes, including & Tinta Roriz, Tinta Amarela, and Touriga Franca. The grapes were foot-trodden in traditional, granite lagares and each parcel was vinified separately. The wines were matured in 225 liter French oak barriques (70% new, 30% used) for about 17 months, and the final wine has an alcohol content of 14.5%.

With a medium red color, this wine had an alluring nose, one which makes you sit and smell the wine for a time before tasting it. Once you sample it, you'll discover a complex and enticing melange of flavors, including ripe plum, black cherry, fig, dark spices, mineral notes and hints of earthiness. Silky tannins, a long and pleasing finish, and excellent structure & balance. It is a hedonistic, delicious wine which will make you crave another glass. It possesses a certain exotic element which I equate with Portuguese wines, a terroir element which appeals to me. If this wine were from any other region, they probably would be charging $100+ for it. I highly recommend it, and it is well worthy of a splurge. 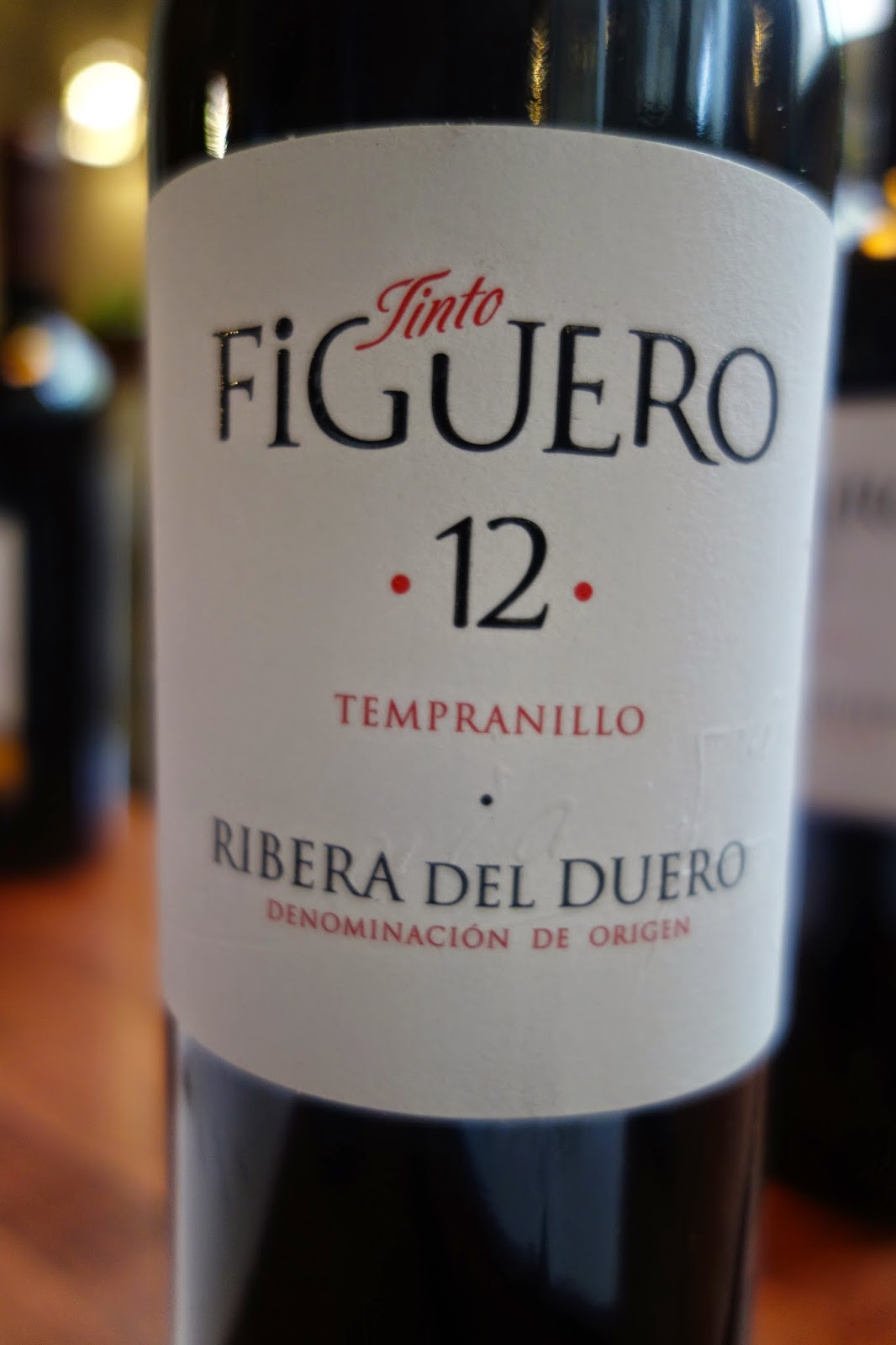 The 2010 Tinto Figuero 12 Tempranillo Crianza ($31.99) is made from 100% Tempranillo, with about 20% from vines that are over 50 years old. Tinto Figuero is owned by José María García and Milagros Figuero, and they have about 130 acres of vineyards, with almost half being older than 60 years, and a state-of-the-art winery. The wine is aged for twelve months (hence the "12"in its name) in two year-old barrels (70% American/30% French oak) and another two years in the bottle before release. I found the wine to have an interesting aroma of black fruit and cedar, and on my palate, there was a nice mix of juicy plum, black cherry, spice, vanilla, eucalyptus, and chocolate notes, especially on the finish. Restrained tannins, a nice elegance, and a lengthy finish. A fine example of the potential of Tempranillo. 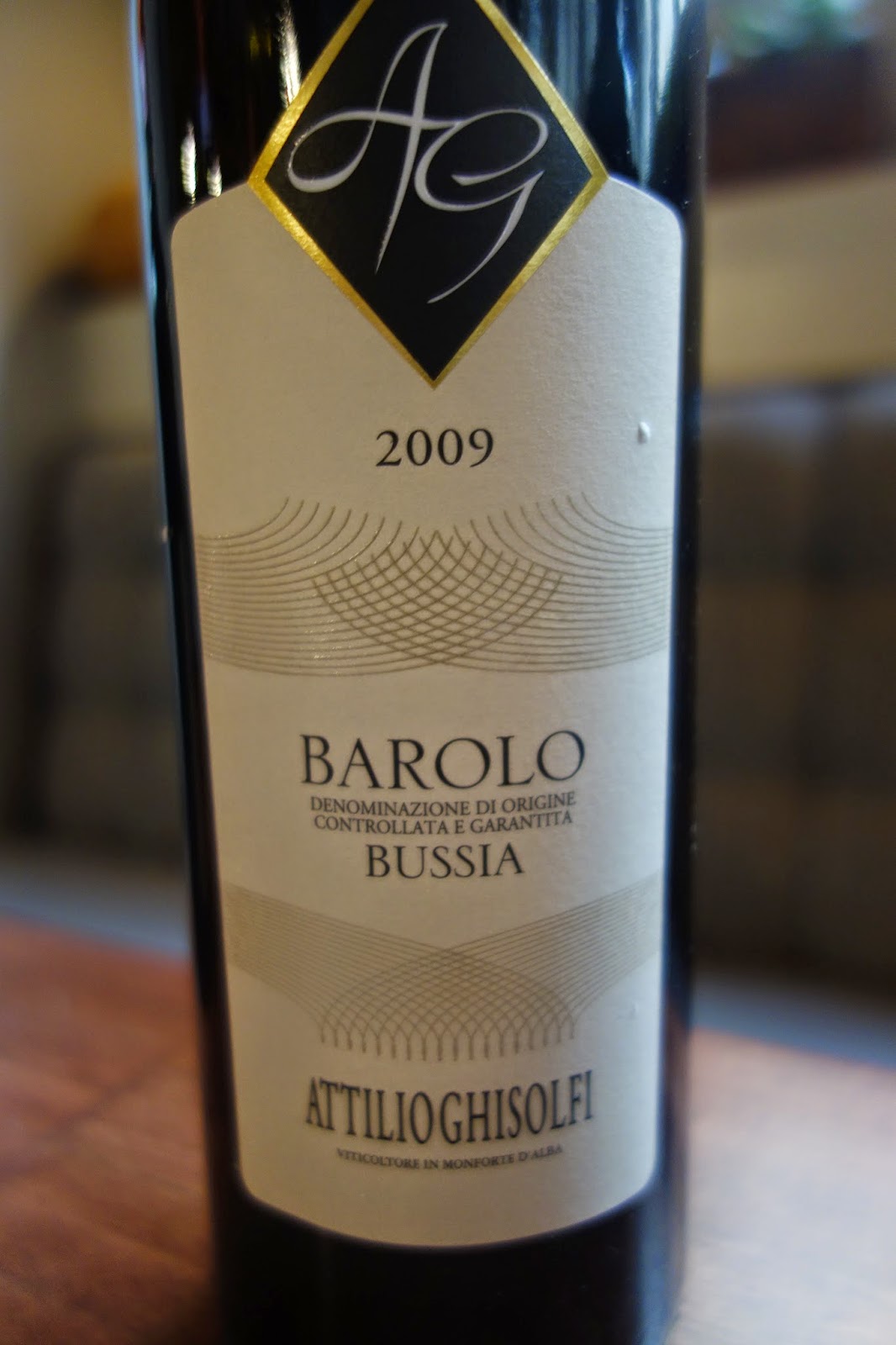 The next three wines, all Barolos, are from the Attilio Ghisolfi winery, which is located in the Piedmont region of Italy. In 1985, Carlo Ghisolfi bought 9 acres in the Cru Bussia area and began making wine. Eventually, his son and grandson purchased another 21 acres. The vineyards are not certified organic, though much of their practices would be considered organic and eco-friendly. They are well known for their Barolo wines.

The 2009 Attilio Ghisolfi Barolo Bussia ($59.99) is made from 100% Nebbiolo, 5-15 year old vines, from vineyards in the Visette area of the village of Monforte d’Alba. Fermentation occurs with native years and the wine is aged in French oak barriques for 30 months, and then 6 more months in the bottle before release. With an alcohol content of 14.5%, the wine is a light red in color, with a nose that is more floral with red fruit accents. On the palate, it is elegant and smooth, with restrained tannins, and pleasant cherry and raspberry flavors, with subtle spice notes, and a hint of cedar, especially on the long finish. This is a Barolo you could easily drink now, though it will age well too. 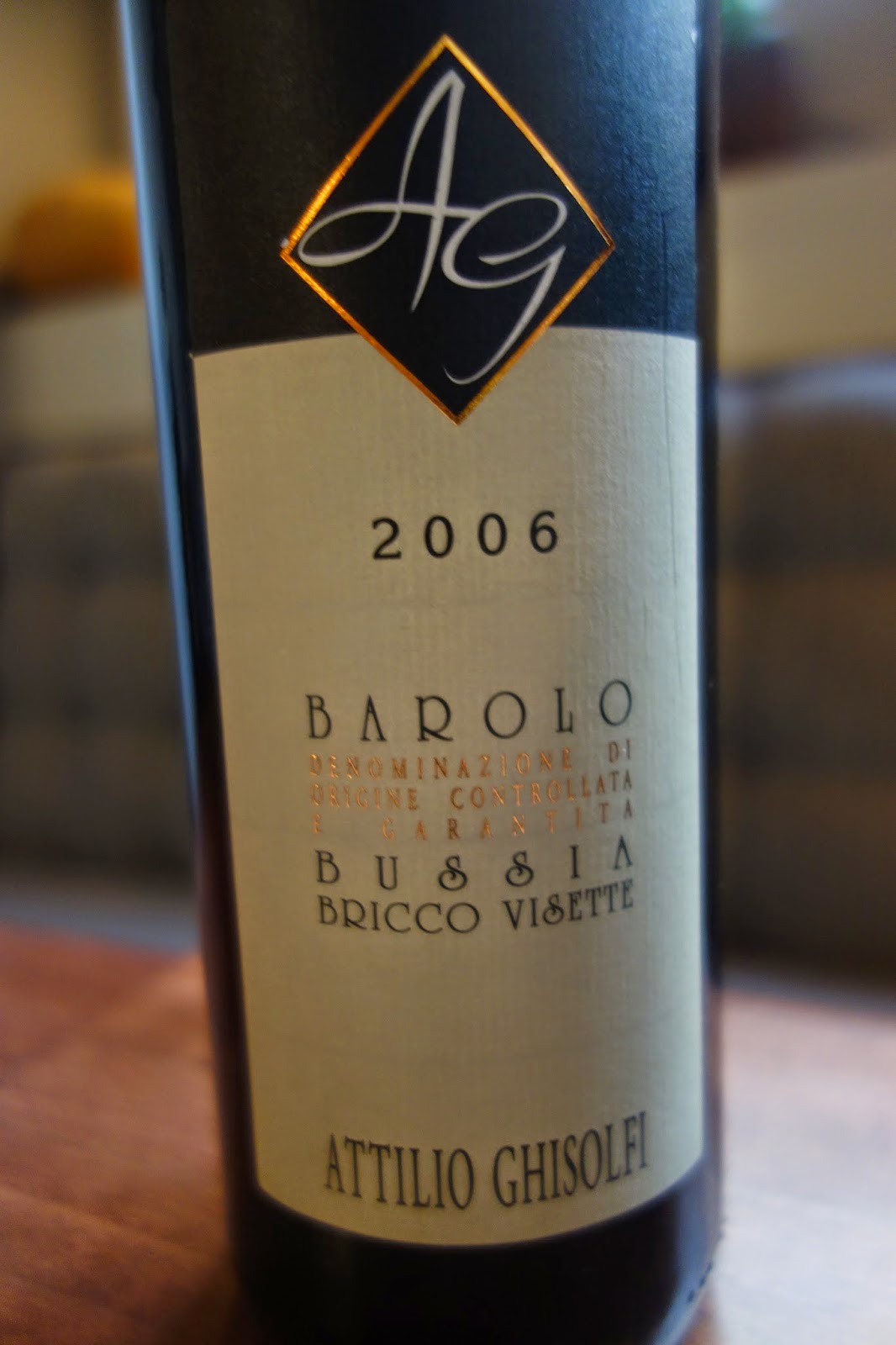 The 2006 Attilio Ghisolfi Barolo Bricco Visette ($79.99), is made from 100% Nebbiolo, 20-50 year old vines, from vineyards in the Visette area of the village of Monforte d’Alba. Fermentation occurs with native years and 70% of the wine is aged in large, French oak barriques, while 30% is aged in small barriques, for 30 months, and then 10 more months in the bottle before release. With an alcohol content of 14.5%, this wine is a light red in color, with less floral elements in the nose and more fruit and spice. On the palate, it is elegant, with a bit stronger tannins than the Bussia, with compelling and complex flavors of black cherry and plum, subtle spices,and some minerality.This is a stunning wine, one to slowly savor and enjoy with friends. It would be an excellent food wine as well. 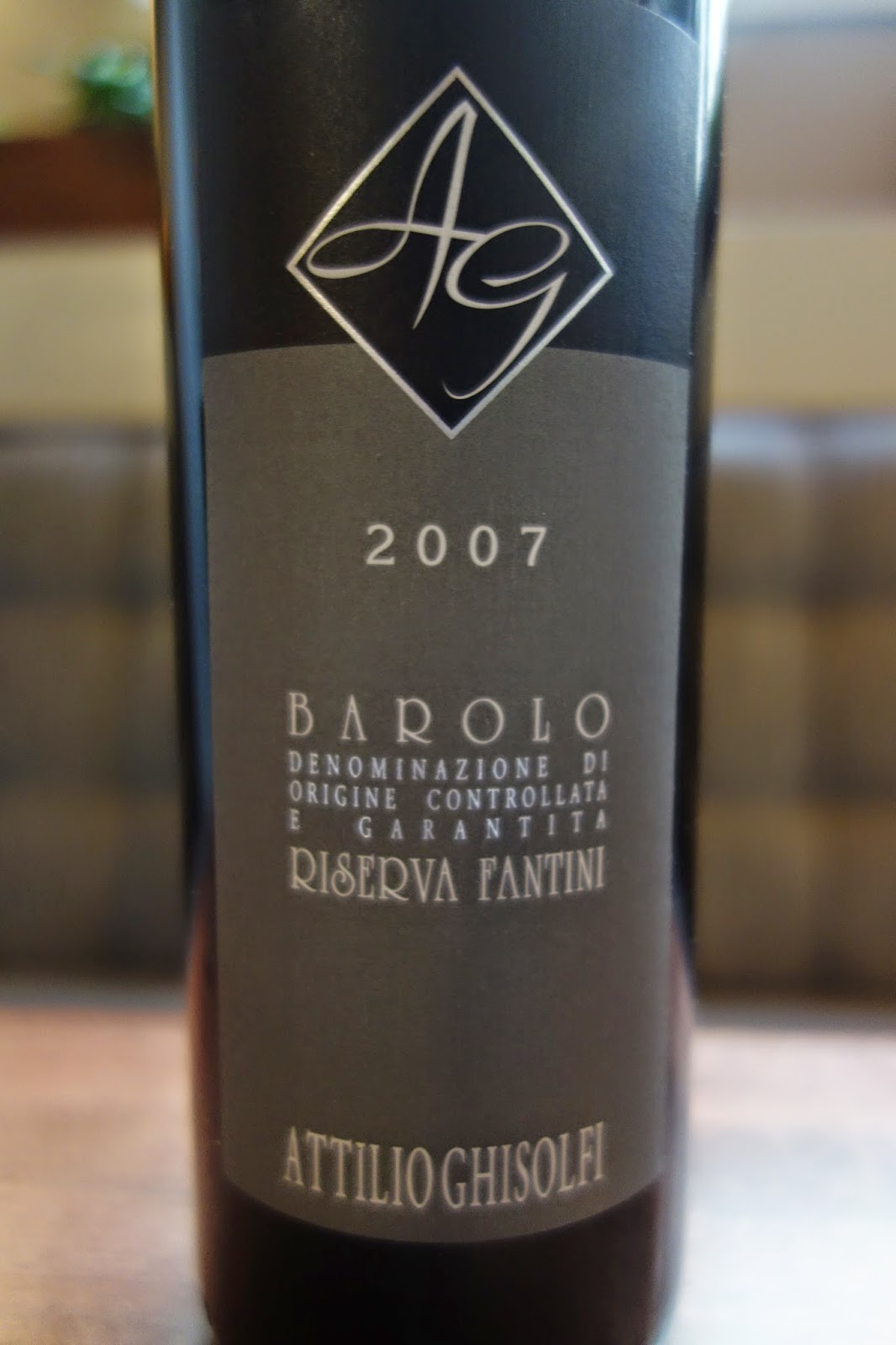 The 2007 Attilio Ghisolfi Barolo Fantini Riserva ($119.99) is made from Nebbiolo, from over 40 year old vines, from a single vineyard in the Visette area named Fantini. Fermentation occurs with wild yeast and the wines is first aged for 12 months in large tonneaux, 36 more months in smaller oak casks and finally 12 more months in the bottle before release. With an alcohol content of 14%, this wine was the darkest red of the three wines, and presents a more earthy, rustic nose. It is also an elegant wine, with rich fruit flavors, mixed with earthy and spice elements, and moderate tannins. Complex and balanced, this is another stunner of a wine, one that might benefit from a bit more aging, though you still could drink it now. Would love to have this wine with some wild boar or other wild game meat.

All three of these Barolos get my highest recommendation, and they are worth the splurge. Remember, the holidays will soon be here, the perfect excuse to buy any of the five wines I recommend in this post.
Posted by Richard Auffrey at 2:30 AM

Oh goodness you were able to taste the Fantini - oh that is heaven! And Vallado Reserve Red is my favorite Thanksgiving wine. What a fantastic line up.