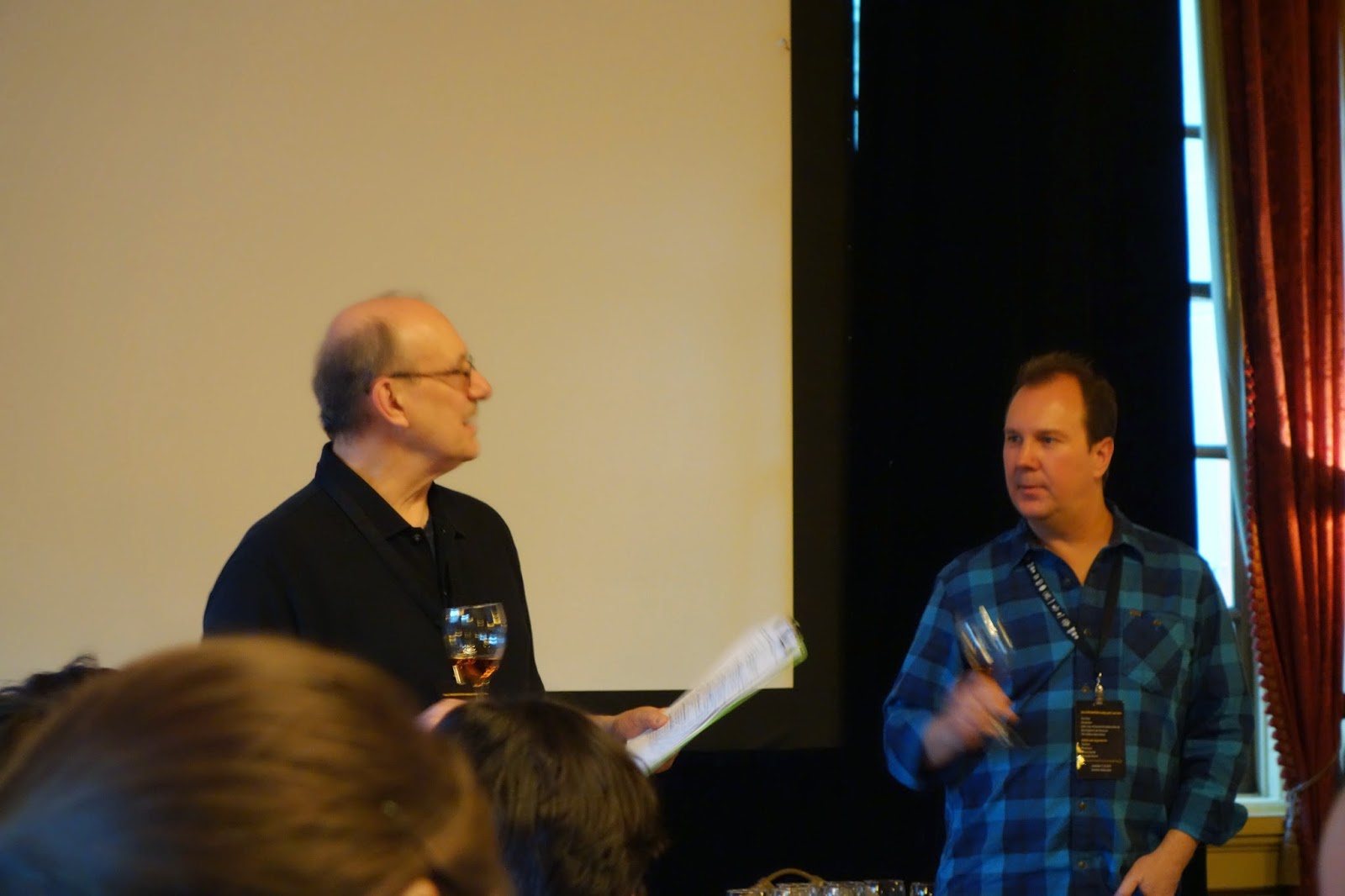 The Paul & Sean spirits team is back!

Earlier today, I posted about Paul Pacult and Sean Ludford's first seminar, Rum For All, at Thirst Boston, I also attended their second seminar, America’s Incredible Whiskey Innovators: Why, How and Which U.S. Distillers Are at the Cutting-Edge. For this seminar, Paul and Sean led us through a tasting of 8 whiskies, providing us a glimpse into the experimentation and innovation that is currently occurring in American whiskey. There isn't an element of whiskey production that is not the subject of experimentation by some distillery. Even if those experimental whiskies are never released to the general public, the information gleaned from some tests can provide valuable data to those distilleries. U.S.distilleries are certainly not the only ones engaged in such experimentation, but this seminar was devoted to them.

Paul and Sean believe that distilling has come full circle, back to artisanal production, like what farmers once did. A couple hundred years ago, stills were a standard piece of farm equipment, and many farmers distilled small batches of excess grain, and each farmer probably did things a bit different from their neighbors. By the end of 2014, there will be approximately 480 craft distilleries in the U.S., with at least one in every state. And these craft distilleries are often doing things their own way,experimenting and innovating. Though some of the larger distilleries are doing the same exact thing. 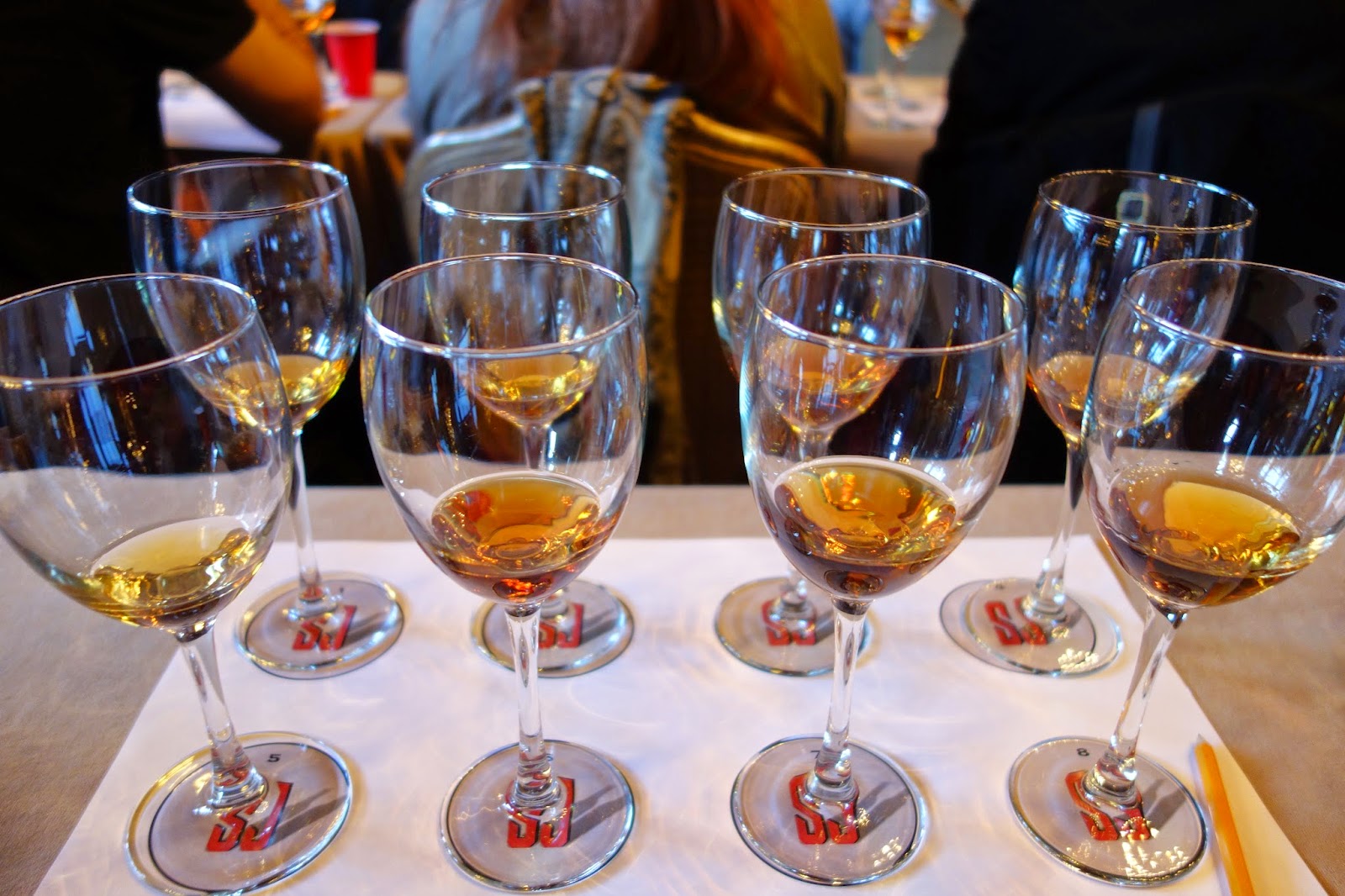 We tasted the first two whiskies, from the Buffalo Trace Single Oak project, as a pair, an intriguing and enlightening comparison, These two whiskies were similar in almost every way. Their primary ingredient was rye, they had the same alcohol level, and were matured in the same type of wood, in level 4 charred barrels. The length of maturation was also the same. There was only a single different element, yet it led to markedly different taste profiles in the whiskies. And it is probably not even an element you have considered before as affecting the taste of your whiskey.

Interestingly, the difference was the location of the source of the wood for the oak barrels. For the first whiskey, the wood was sourced from the bottom of the tree while the wood for the second whiskey came from the top of the tree. That simple difference made a meaningful change in the flavor profile. Because there are more natural sugars at the bottom of the tree, the first whiskey had a more aggressive taste, and seemed a bit hotter. While the second whiskey, which had less sugars, was more elegant and mellow. This is something few distilleries pay any attention to, but a blind taste test showed that it is relevant.

Buffalo Trace, which I've visited before, engages in lots of whiskey experimentation, and much of that is not available to the general public, though they sometimes have a limited release of certain experimental whiskies.

The next three whiskies illustrated the effects of finishing barrels. In essence, a whiskey is matured in a usual barrel, and then spends a little extra time in a finishing barrel, such as a Port or Sherry barrel. There is no question that a finishing barrel will change the taste of the whiskey, but the true question is whether that change is an enhancement or not. Whiskey purists aren't too keen on finishing barrels, but they seem to be far more accepted than "flavored" whiskies. Yet, the idea of a finishing barrel is to add flavor to the whiskey, so in some respects, they are the same, Is it the manner of adding flavor that matters, and not the fact that flavored is added?

Whiskey #3 was from the A. Smith Bowman distillery in Virginia, the Abraham Bowman Gingerbread Beer Finished Bourbon, and it spends about two months in Hardywood Brewery Gingerbread Stout barrels.It didn't taste much like beer to me, bit there was a pleasant sweetness to the bourbon, more caramel and baking spices. Whiskey #4 and #5 were both from Angel's Envy, the first a Rye that spent 18 months in an old rum barrel, which once had been a Cognac barrel, and the second was a Bourbon, finished in Port barrels. The Rye certainly had more tropical fruit, especially coconut, flavors, and even an aroma of molasses. And the Bourbon too had Port-like elements in both the nose and on the palate.

The next two whiskies were both from Hillrock Estate Distillery, in the Hudson Valley,and included their Double Cask Rye and Solera Aged Bourbon. I recently visited this distillery and you can read my review here. Hillrock is seeking to create estate whiskies, which are reflective of terroir. Their whiskies generally possess notes of clove and cinnamon, a clear indicator of the terroir of their estate. I highly recommend their products, and was pleased to see them showcased at this seminar.

The final whiskey of the seminar was fifteen years old, but was very aggressive with a heavy texture. It was also from Buffalo Trace and its claim to fame is that its maturation barrels were a Level 7 char. Now, most charring ranges from levels 1 to 4, but Buffalo Trace really upped the ante, providing more char for the whiskey to react with, providing more aggressive flavors.

Let us hope all of these whisky experiments continue, expanding our knowledge and experience.
Posted by Richard Auffrey at 3:30 AM