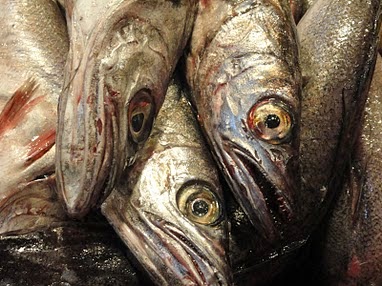 The National Marine Fisheries Service (NMFS) has just released their annual yearbook of fishery statistics for the U.S. though they note that "Data in this publication are considered to be preliminary and are subject to revision as better information becomes available and updates are made by our regional partners." For our purposes, we'll accept the information as relatively accurate, and I will update matters if their information changes. The report is 130 pages long and contains numerous charts and data on all sorts of fishery items. I've gleaned plenty of interesting data from the report and want to discuss four key topics from it.

1) Seafood Consumption
Are Americans eating more seafood? Some of the statistics sound promising, or at least until you place them in context. In 2013, Americans ate 4.6 billion pounds of seafood, making the U.S. the third largest consumer of seafood in the world. That sounds great, but it doesn't tell the whole story. China and Japan occupy the top two spots, which isn't a surprise. When you break the U.S. numbers down, you find that the average American consumed only about 14.5 pounds of seafood in 2013. That figure is very close to the 2012 amount of 14.4 pounds. We can even determine where the tiny increase in seafood consumption originated. It seems there's been an increase in canned salmon consumption, partially due to a significant pink salmon harvest.

In comparison, average seafood consumption was 15.8 pounds in 2010, so consumers have been eating less seafood. And according to USDA Dietary Guidelines, Americans should be eating about 26 pounds of seafood. Americans apparently are not listening to those encouraging them to eat more seafood. That means more outreach is needed. We need more positive articles in the media espousing the health benefits of eating seafood. We need to overcome the obstacles that prevent people from consuming more seafood, such as its high cost and the difficulties many people have cooking seafood at home. We need to get Americans to eat more than another 10 pounds of seafood each year. It's a formidable goal, but it can be accomplished.

Now, NOAA acknowledges that their model may not be fully accurate, and that the percentage could be overestimated. However, even if the figure is off by as much as 10 percentage points, it would still be much too high. There are many reasons why you should be eating more domestic seafood, from supporting local economies to health reasons. It is easier to monitor domestic seafood than it is imported seafood. We need to demand that our seafood shops and restaurants sell and serve more domestic seafood. For example, they could buy more Gulf shrimp rather than Asian shrimp. We all must do our part.

As for specific ports, Dutch Harbor in Alaska has the largest volume of seafood landings, and has held that spot for 17 consecutive years. Nearly 90% of those landings are from Alaskan pollock. As for the port with the highest value of seafood landings, Massachusetts can be proud that New Bedford occupies the top spot, for the 14th consecutive year. About 80% of that value comes from sea scallops.

4) Aquaculture
I've said that the U.S. needs to engage in more aquaculture, to produce more local, sustainable seafood for American consumption. In 2012, the U.S. produced about 594 million pounds of aquaculture seafood, both freshwater and marine, valued at about $1.2 billion. We have seen a steady growth in aquaculture since 2007, roughly 8% each year. However, the volume of aquaculture is only about 6% of the wild catch so there is much room for growth. Worldwide, aquaculture makes up about 50% of all seafood, and that figure continues to grow. The more aquaculture the U.S. conducts, then the more local seafood Americans can eat.

Let us hope that all of these statistics have significantly improve by the time the next annual report is released.
Posted by Richard Auffrey at 3:00 AM