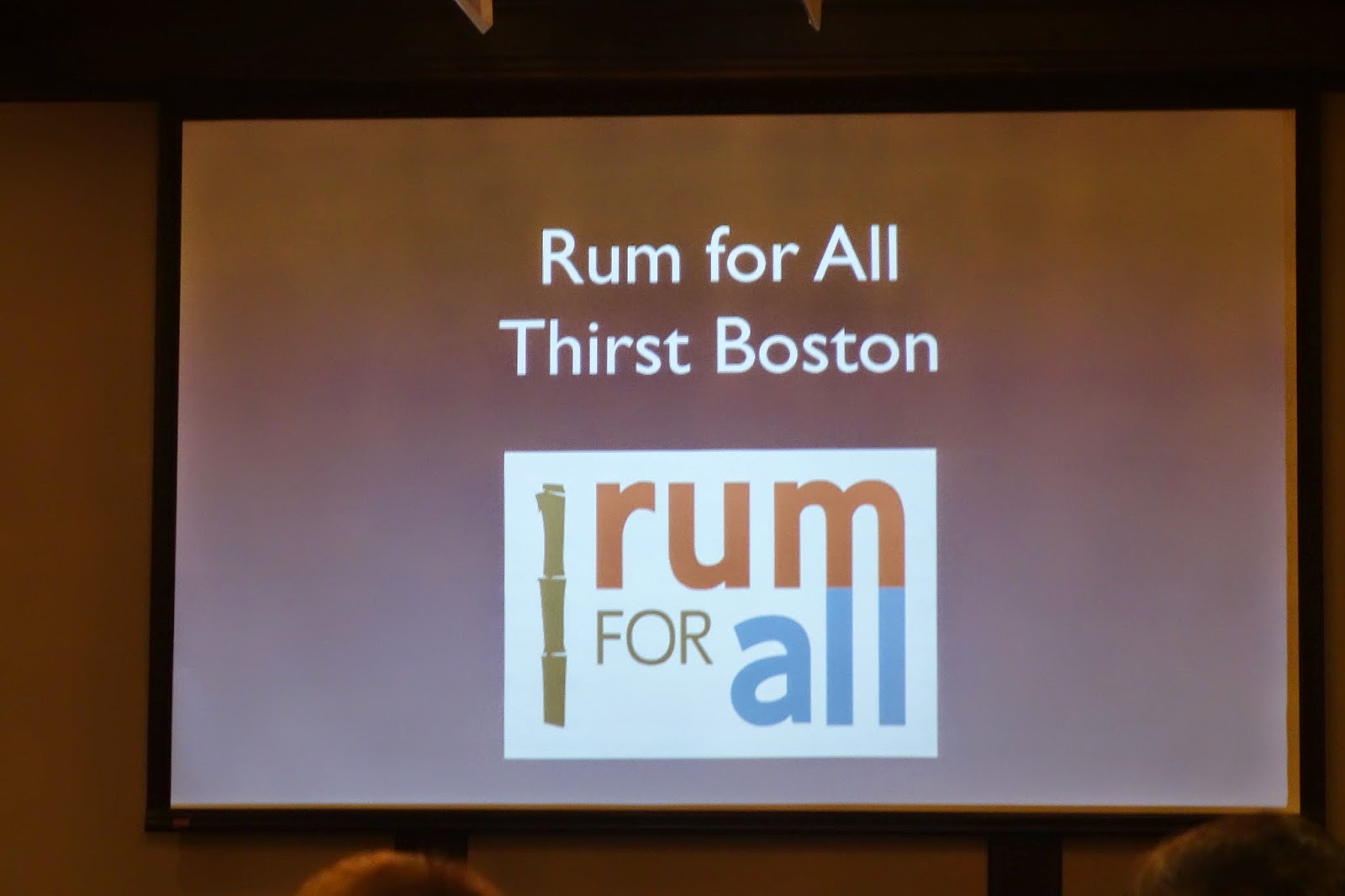 Saturday morning at 10am. Ten glasses of rum were on the table before me. Just par for the course at the first seminar of Thirst Boston, the annual drinks conference in Boston.

The seminar was All For Rum & RUM FOR ALL! Why To Perceive Rum as You Do Scotch, Cognac, Bourbon, and was led by F. Paul Pacult and Sean Ludford, co-directors of Rum For All, an independent advocacy group, which "is dedicated to demonstrating Rum’s universal appeal to both the novice and expert alike and to making the case that Rum deserves to be included in the company of the world’s most hallowed spirits." This group was founded in 2011, and they have fifteen rum producers as members, an ever changing list that never surpasses 15 members. Paul and Sean have run numerous rum seminars across the country, spreading their passion for rum.

In addition, Paul is an author, the editor of F. Paul Pacult’s Spirit Journal, and a founder of both Beverage Alcohol Resource (BAR) and Ultimate Beverage Challenge (UBC). Sean is the editor of BevX, as well as a partner and judging co-chairman of UBC. They bring lots of experience and knowledge to this seminar.

As Paul stated to us, the basic purpose of the seminar was to try "to show that rum itself is one of the great spirits of the world." During the course of ninety minutes, Paul and Sean alternated teaching us about rum, and then tasting some rum. That way, the class seemed much less academic, and more a fun and informative method to learn about rum. And Paul and Sean were witty presenters, keeping everything down to earth and fun, without any hint of snobbery. They also did their part to shatter some common myths about rum. 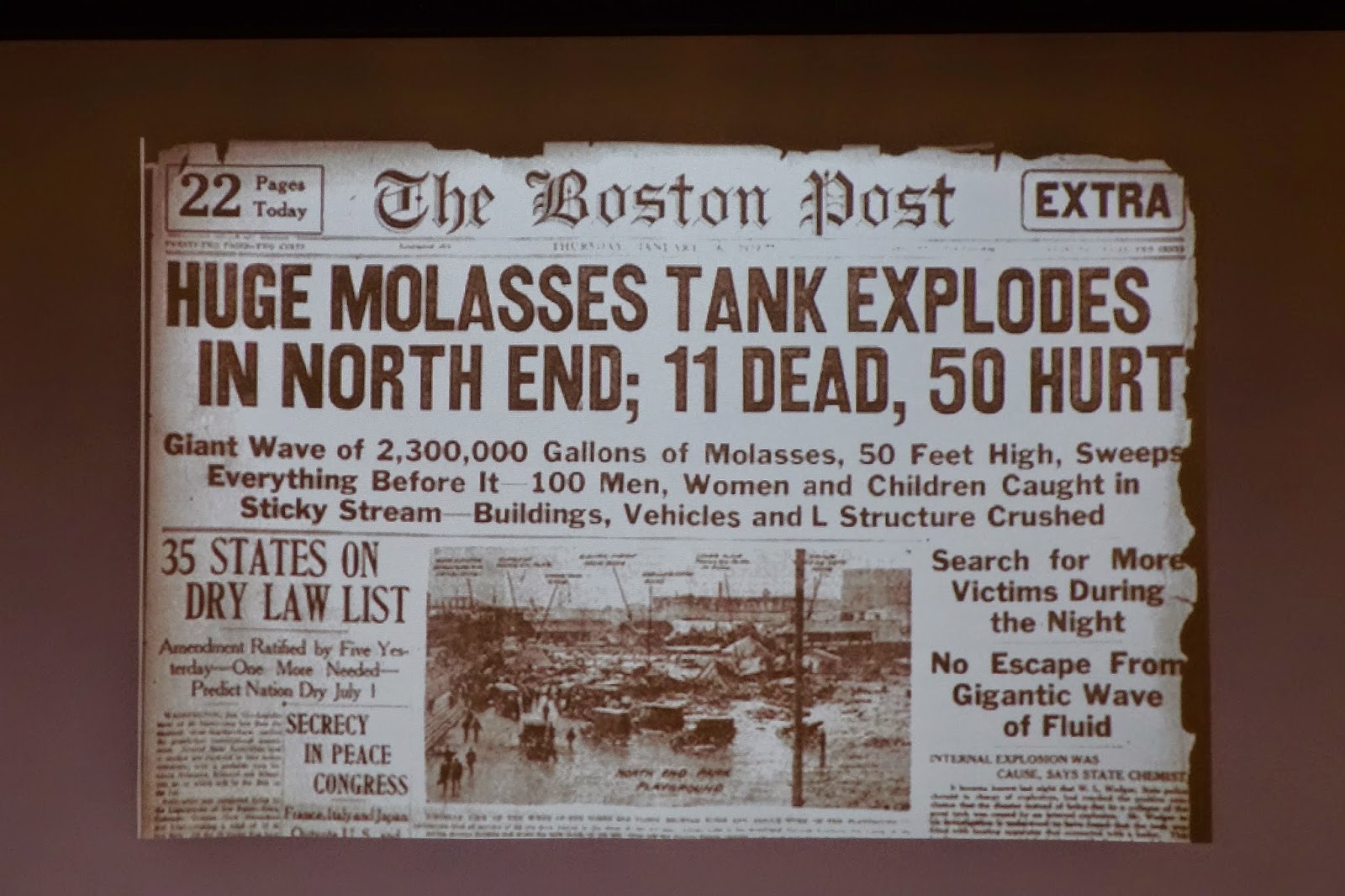 Rum is produced from two main components, sugar cane juice or molasses, though you may see a few rums that are a blend of both sources. About 97% of all rum is based on molasses, so it is by far the most common method. In general, rums made from sugar cane juice tend to be more earthy and grassy, while molasses rums tend more to be fruity and nutty with baking spices notes, Paul mentioned that black pepper is a very common element found in all nearly rums (and many other spirits too). Molasses is an excellent fermenting agent as it possesses lots of sugars and actually has a fair share of nutrients as well.

Christopher Columbus brought sugar cane to the island of Hispaniola and found that it grew very well there. Because of that, sugar came soon spread throughout the Caribbean and South America, especially Brazil.  By the end of the first half of the 18th century, there were about 63 rum distilleries in Massachusetts and another 30 in Rhode Island. It was big business, and Paul and Sean didn't hesitate to raise one of the most ugly elements of rum production, the Triangular Trade. Slaves were taken from Africa to the Caribbean and forced to work on sugar cane plantations where molasses was made. That molasses was traded to the northeast region, where it was turned into rum, and then that rum was sent back to Africa, to pay for more slaves

All rum was originally made in pot stills, though by the 1820s, column distillation came around. It was here that Sean mentioned some common rum myths, such as sugar cane juice is better than molasses, and that pot stills are better than column stills. He stated neither was true, and that it all comes down to how you utilize the ingredients and equipment. That is applicable for all spirits, that utilization is such a significant aspect of quality. And a great way to prove this is to do some blind tastings, and see how your preconceptions might be shattered. 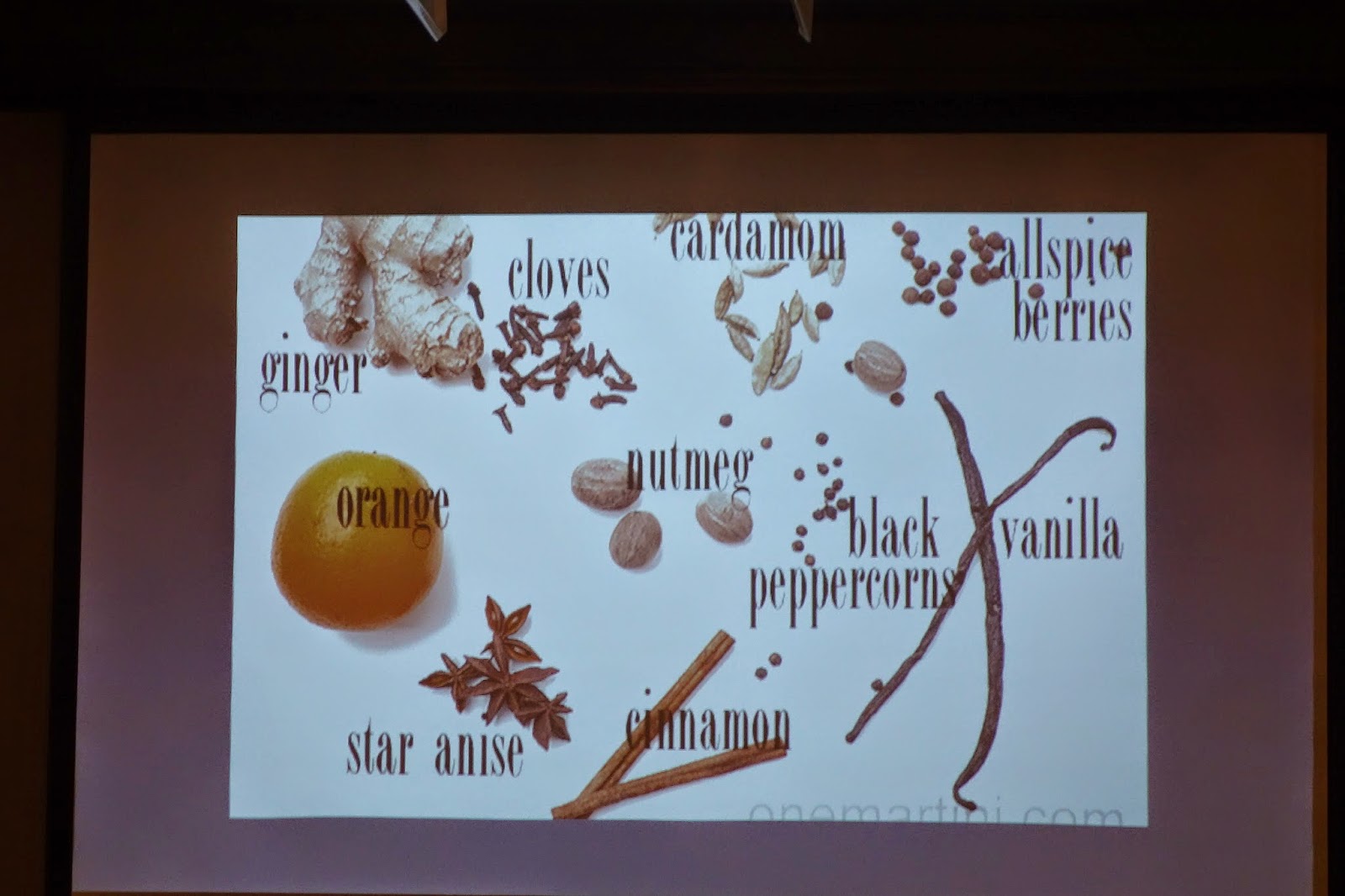 There was also a discussion on barrel maturation, and that barrels aged differently in different countries and regions. One of the most important differences is climate. For example, they discussed the "angel's share," that part of the liquid in a barrel that evaporates each year. In the Caribbean, Sean mentioned that the angel's share is more like the Taxman, a greedy bastard who steals 8%-10% each year, far more than would be lost in a cooler place like Scotland. With the increased heat, the spirit goes deeper into the wood, and more stays there, which also means the spirit ages quicker in the barrel. Sean also said we could almost look at Caribbean years as akin to dog years when compared to a place like Scotland.

The art of blending was also discussed, the ability to use a larger palate to work with, to better craft the spirit to a particular style. As I've mentioned before, the art of blending is far too often an under-appreciated aspect of wine making, as well as spirits production. Rum with age statements might be missing out on the benefits of blending, stuck with a small palate, and more limited as to what they can create.

In the wine world, discussions of terroir are common,but you don't hear the term used as much in the spirits world, though that is changing. Paul and Sean claimed that terroir can exist in rum, though stating only a small percentage, maybe 10%, actually possesses terroir, a sense of place. And I don't think there is much controversy over their statement, as they were referring to those producers who grew sugar came on their own estates, have special sources of water, and more. It is those elements which can shine through a rum and bring to mind specifics from that place. In that respect, it is little different from wine.


Finally, they discussed the versatility of rum, recommending that rum be substituted for other spirits in classic cocktails. That might be the best way to persuade someone to become a rum lover, by adding it to their favorite cocktail. Rum will present a different flavor profile, but one which is likely to appeal to many people. Though of course there are plenty of tasty rum cocktails that also exist, and can be used to convince more people to drink rum. 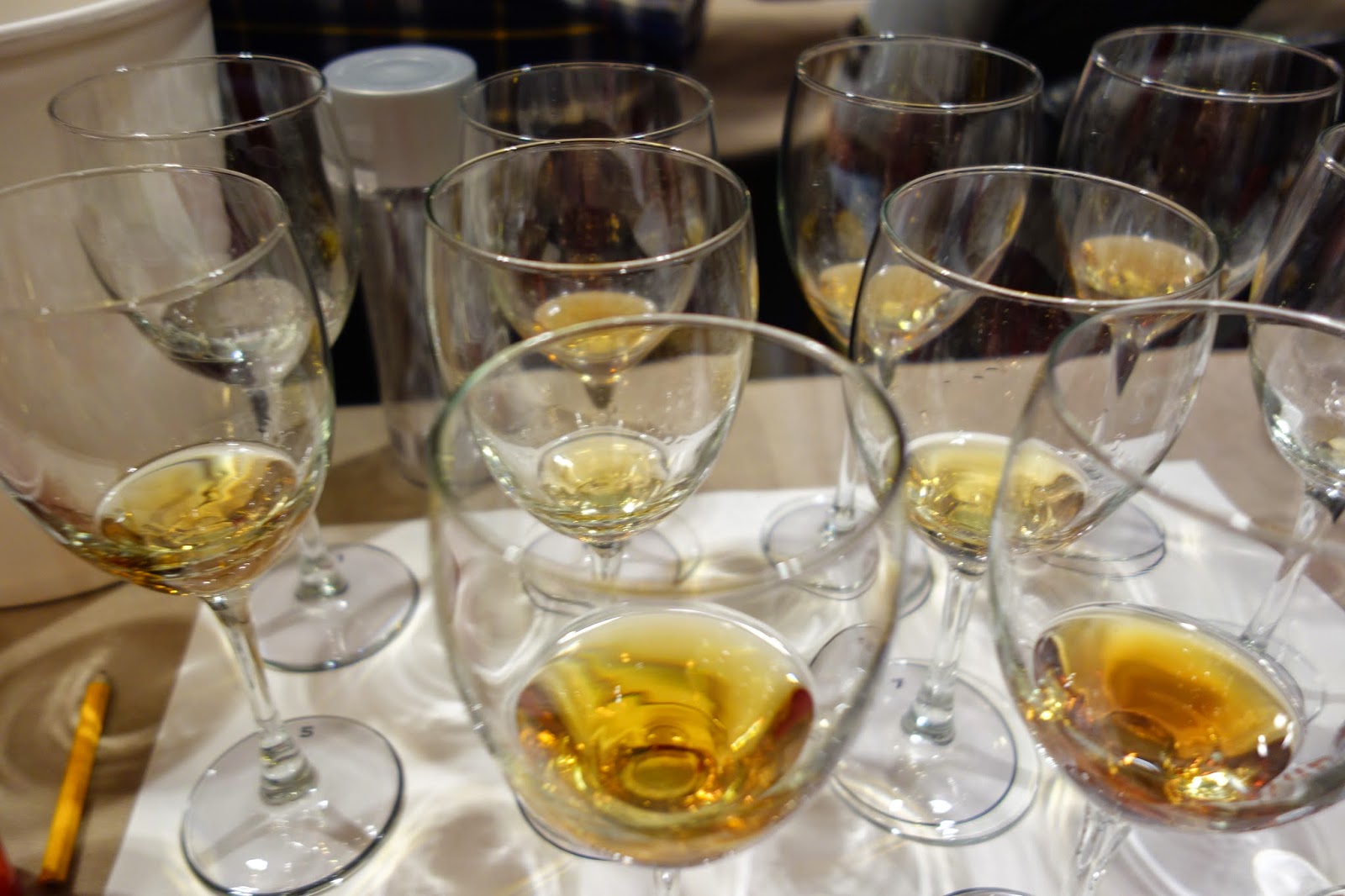 Throughout the seminar, we tasted various rums, generally having some relevance to the discussion at hand. It was a blind tasting, where we would first taste and discuss the rum before its identity was revealed. With each rum, Paul and Sean recommended a specific cocktail which was intended to best show off the attributes of that rum.

Looking at all of the glasses, one had a clear liquid, the first rum of the tasting. Usually, you would suspect the white rum was unaged, but that was not the case. It was the Brugal Especial Extra Dry, a blend of rums aged 2-5 years, but distilled and filtered so that it possessed no color. Designed for cocktails, Paul and Sean recommended the Mojito.

Another surprise of the tasting was the fifth rum, a tasty spirit with plenty of complexity and depth of flavor. It turned out to be the Bacardi 8, a blend of heavy and light rums with an emphasis on the heavy. Bacardi is sometimes looked down upon by rum snobs but the company has large stores of aged, quality rum, and this was an excellent example of that potential. Not all Bacardi is the same, and you shouldn't write off the entire brand. Try the Bacardi 8 in a Rum Old Fashioned.

The sixth rum was the Ron Abuelo 7 Year Old, which is from an estate in Panama which grows their own sugar came. They use two columns stills and two types of molasses, and the rum had intriguing flavors of earthiness, fruit and hints of smoke. It was held up as an example of terroir in rum, and it was recommended to use this in a Rum Sidecar.

My favorite rum of the tasting was fourth one, the Don Q Gran Anejo, which contains rums aged 3-20 years, It possess a complex melange of flavors and aromas, which will tantalize your palate. Silky smooth, it possesses a lingering and satisfying finish. It even possesses some Sherry-like qualities, which may also be a reason I enjoyed it so much. Though they recommended a Rum Manhattan, I would much prefer this rum on its own. 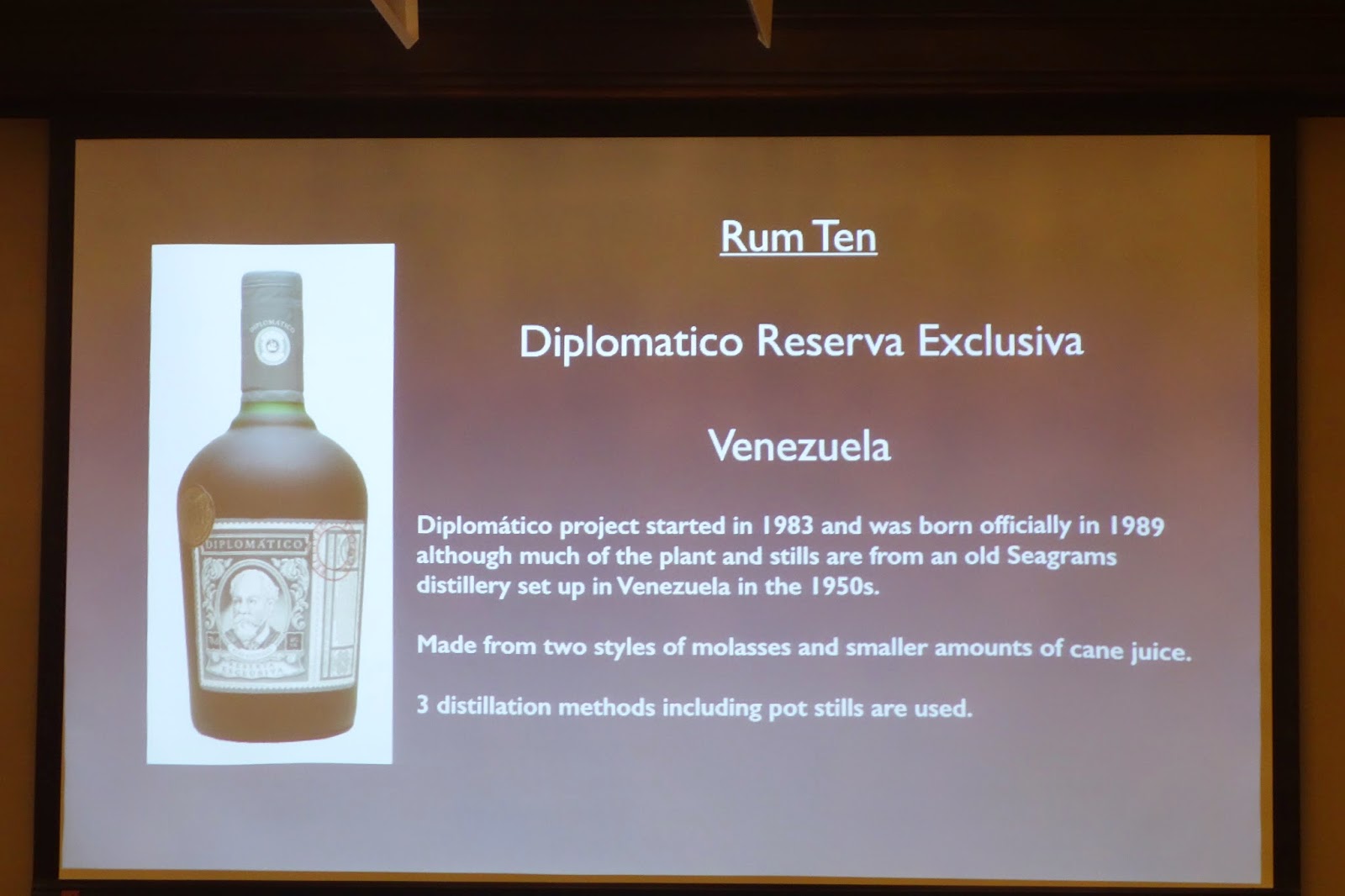 Another of the top rums of the tasting was the last rum, the Diplomatico Reserva Exclusivo, which is made from a blend of molasses and sugar cane juice, and also uses three distillation methods.This is a sweeter rum, a pleasant after-dinner drink or something to accompany dessert. Rich flavors of caramel, butterscotch and vanilla, with some baking spices and slight earthy notes.

Thanks to Paul and Sean for leading this fascinating seminar and tasting.
Posted by Richard Auffrey at 3:00 AM