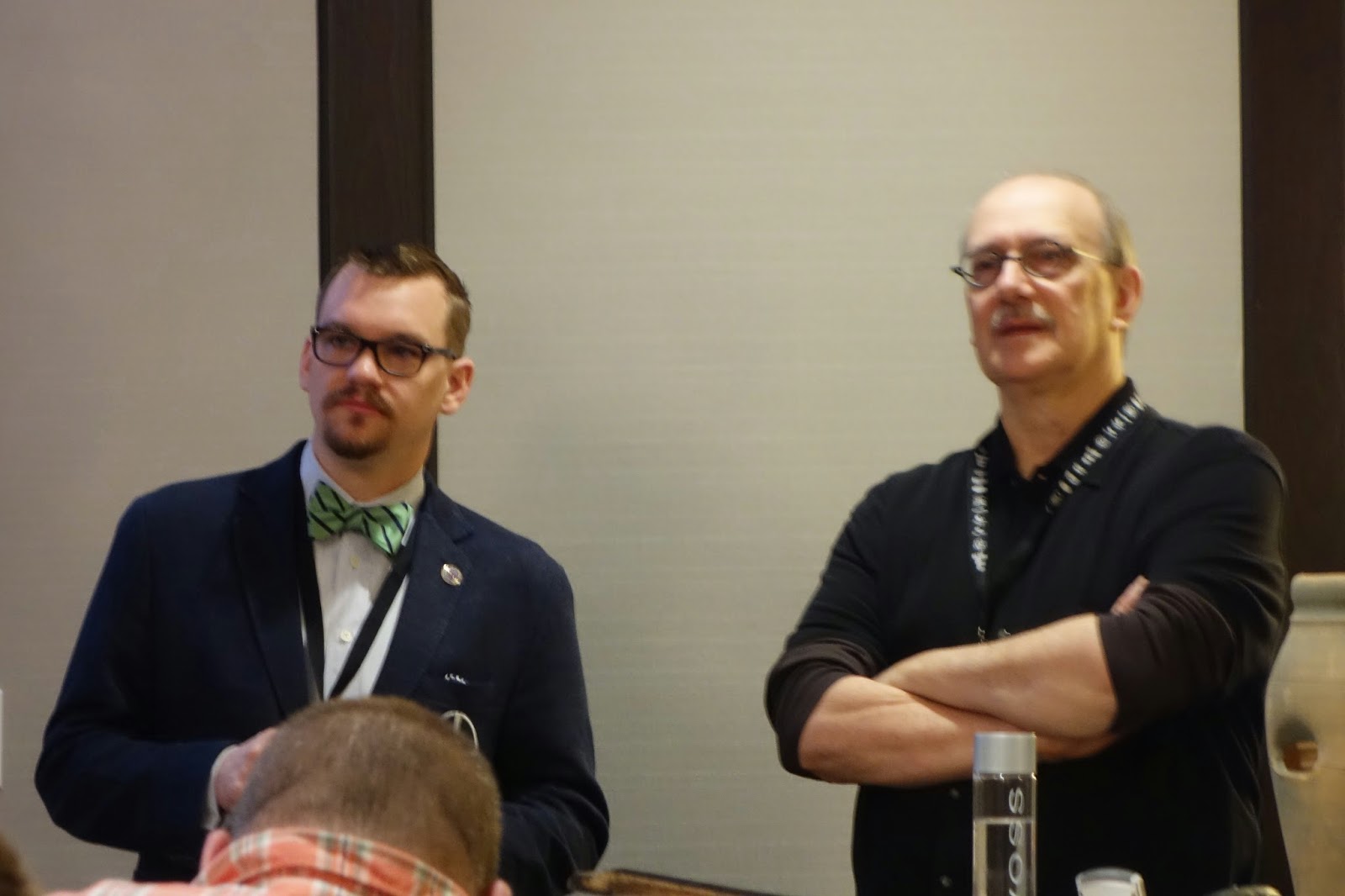 Wooden barrels have been used for at least 2000 years, initially for transportation, and eventually for the maturation of wine and spirits  However, it is fascinating that the processes of barrel maturation are still not fully understood, and experimentation to better comprehend matters is ongoing. Oak can have a significant effect on wine and spirits, but there are many different factors involved in that maturation, and failure to understand about any aspect could negatively affect the final result. That ignorance could also create an excellent end result, but one you might not be able to replicate again due to your lack of knowledge.

At Thirst Boston, I attended a seminar, Woodn’t It Be Nice? What You Haven’t Been Told About Barrel-Aging History and Impact, held by F. Paul Pacult and Troy Clarke. Paul is one of the co-directors of Rum For All, an independent advocacy group for rum. In addition, Paul is an author, the editor of F. Paul Pacult’s Spirit Journal, and a founder of both Beverage Alcohol Resource (BAR) and Ultimate Beverage Challenge (UBC). Troy is the Director of Spirits & Mixology Education for Martignetti Co/United Liquors and President of the U.S. Bartenders' Guild, Boston Chapter.

Paul and Troy stated that this is a relatively new seminar, having been conducted only three times in the past year. Previously, there hadn't been much information on the history and nature of barrel maturation but they have performed some new research. As such, they are still fine tuning the seminar, especially as new information is found. It was a fascinating seminar, of relevance to anyone who wants to understand barrel aging, and the tasting component assisted us in understanding the different effects of different types of barrels. 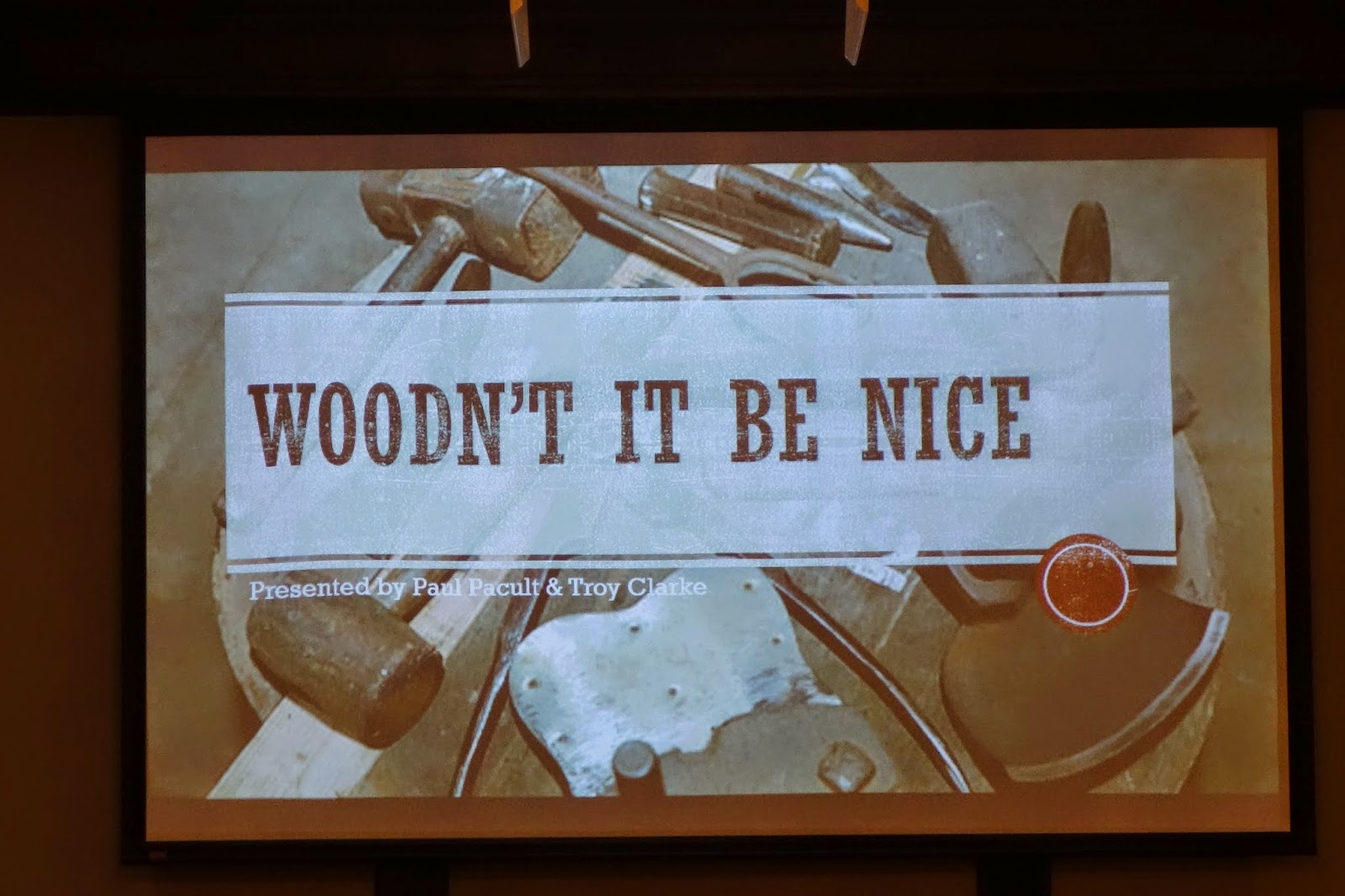 The seminar began, looking back about 150,000 years, to New Guinea, where the first evidence of trade has been found. This is important because barrels were eventually invented because of trade. Trade is basically an exchange of goods between different regions or culture, and the first type of trade was barter. By 12,000 BCE, trade was common and from 1500 BCE to 500 AD, the Mediterranean region was a major arena of trade, as ships hugged the shores, traveling from port to port.

Most of this trade utilized earthenware/clay vessels; known as amphorae; to transport their goods, though Herodotus noted that the Sumerians were the first to use wooden barrels, made from palm wood, to transport some goods. Others would eventually move toward wooden barrels as they provided a number of advantages over amphorae. These clay vessels were heavy, didn't roll easily and were breakable. In addition, they sometimes could adversely affect the aroma and taste of whatever was stored inside, and those items were also susceptible to pests and rodents. Wooden barrels could be more easily rolled around, were stronger than amphorae, and could actually enhance the flavor of items stored within them.

Barrel makers learned much from ship builders, who long had been working with wood. Gaul eventually became a center for barrel making, In Latin, barrels were known as cupals, and barrel makers as cuparii. In time, cuparii became transformed into the English word cooper.  Coppers were even one of the first guilds, started in Rome. Though barrel makers experimented with different shapes, they found the cylinder to be the best as the more corners in a wooden barrel, the greater the chance of leakage. 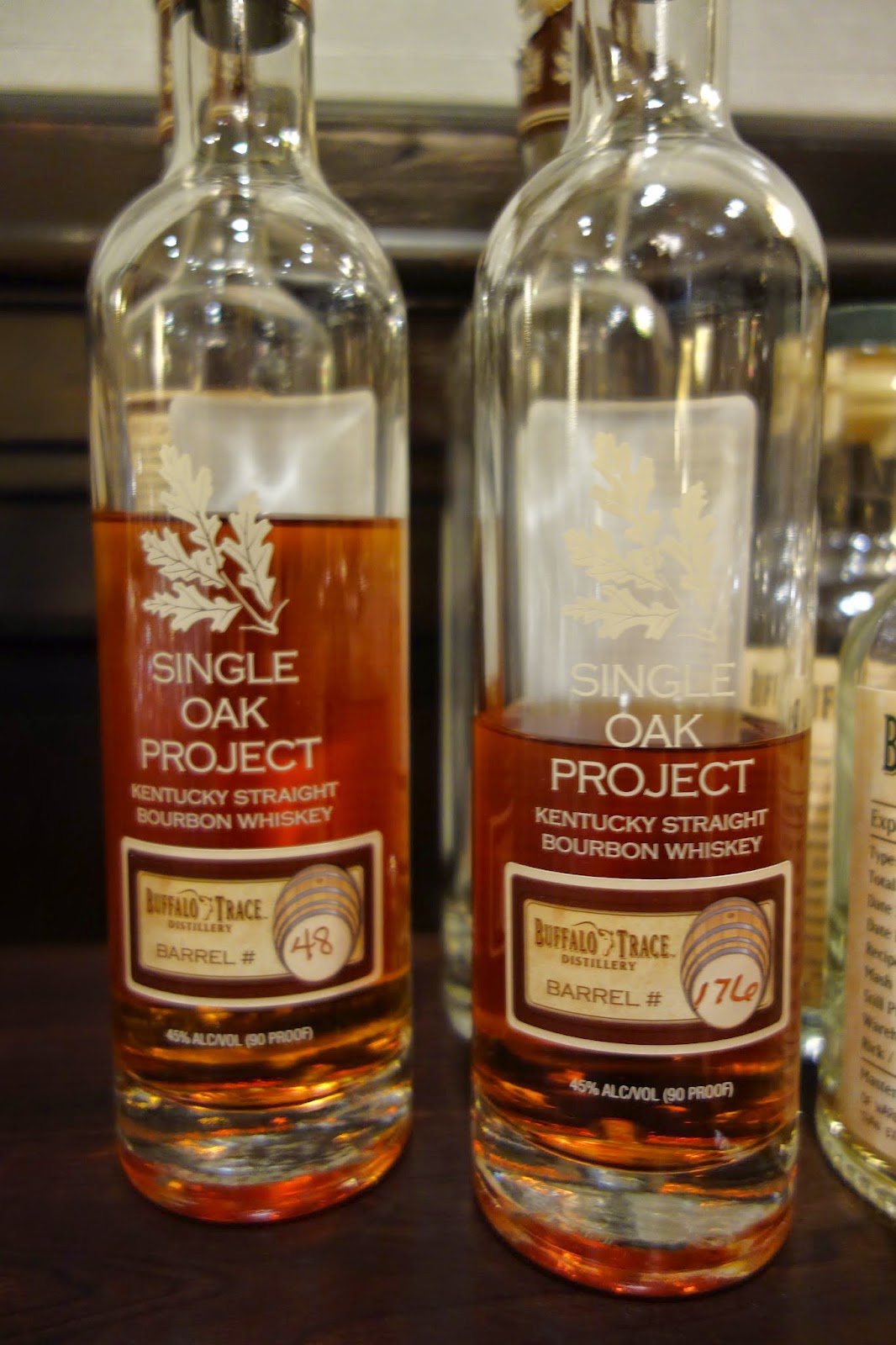 Buffalo Trace Distillery has been at the forefront of barrel research, seeking the perfect combination for their spirits. For our first two tastings, we compared bourbons, with a wheat recipe, which were similar in most ways except for the type of barrels used for maturation. The first bourbon was aged in a very tight-grained oak while the second used a more wide grain oak. There were significant differences between the two bourbons, as the second one had more intrusion into the wood, leading to a greater extraction. The first bourbon appealed to me more, with more restrained but still noticeable flavors.

Oak became the most common wood for barrels as it is a hard wood, and contains very little sap. Oak trees like to grow in colonies, and the ancient Romans were the first to be concerned about potential oak shortages, though more for ship building than barrel making. In response, the Romans protected certain forests, limiting what could be harvested. Oak also contains five major compounds: cellulose, hemocellulose, lignin, tannin and lipids. Each contributes in some respect to the maturation of alcohols kept within the barrel.

There are various types of oak, which in some respects can be broken down into three categories: American White Oak, French Oak and Eastern European Oak. American oak tends to be fast growing, dense with wide grains, possess low tannins, and have more intense flavors as it has four times the amount of lactones as French oak. French oak tends to be medium-fast growing, with tight grains, and is less watertight than American oak. Eastern European oak, Slavonian, Russian or Hungarian, tends to have tight grains, low tannins, and low aromatics. American oak's iconic flavors include vanilla and coconut while French oak include vanilla and almond.

Oak trees, harvested for barrels, must be at least 100 years old, and the type of oak will affect the method of harvesting, the idea being to maintain the integrity of the grain. American oak can be sawed but French oak must be hand split, which is more laborious, leading to a higher price for French oak. Of all the parts of an oak, coopers want the heartwood for their staves. 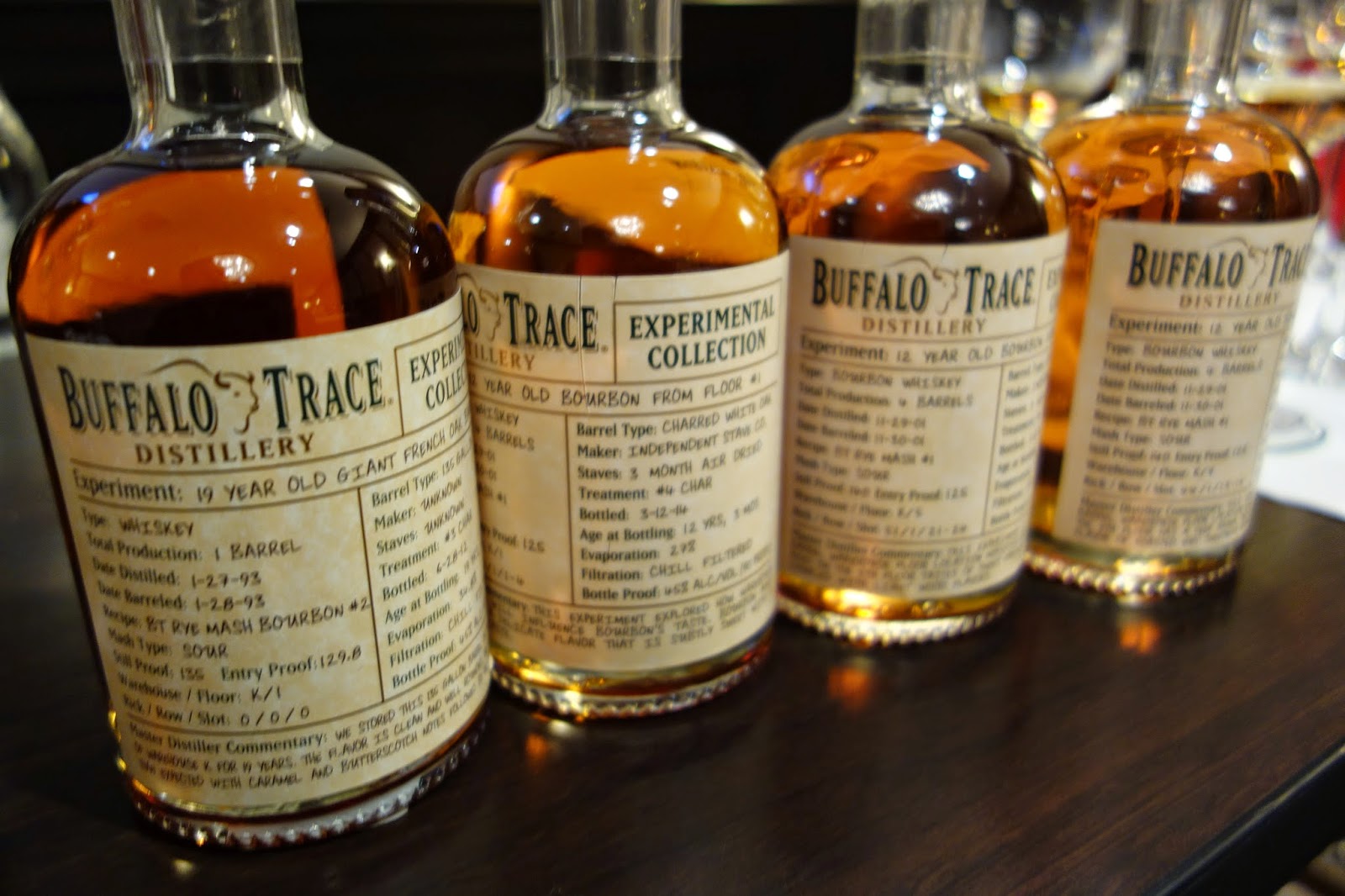 The third whiskey we tasted had spent 19 years in the French oak barrel, but it was not a standard size. It was aged in a 135 gallon barrel, and presented tasty notes of earthiness, caramel and coffee but its finish was short. Because of the larger size of the barrel, the length of its aging did not affect the whiskey as it would if the barrel was smaller.

As Paul and Troy said, barrel maturation is all about contact, the calculation of the surface area to volume ratio. The smaller the barrel, the more of the liquid which is in contact with the wood, which will mean greater changes in the liquid. Larger barrels mean less liquid is in contact with the wood, so maturation takes longer. Numerous craft distilleries use small barrels for maturation, aging their spirits quicker, though it is not without some controversy as not everyone believes in using small barrels for whiskey.

Paul mentioned that "oak impacts but also leeches out" flavors. There are a number of chemical processes that occur within a barrel, which will make changes in the alcohol. In extraction, the liquid soaks into the wood, extracting flavors and sweetness from the wood. Some of the liquid, called the angel's share, will evaporate from the barrel, and the type of wood and temperatures outside of the barrels will affect the amount of that angel's share. Oxidation occurs when air enters the barrel through the porous wood, which tends to dissolve some of the spirit and form flavors. Concentration occurs when the flavors begin to concentrate and smooth out the spirit. The charring within the barrel filters the spirit, absorbing sulfur too. There is also coloration, as the red layer from the charring imparts color to the spirit. There is so much going on within a barrel. : 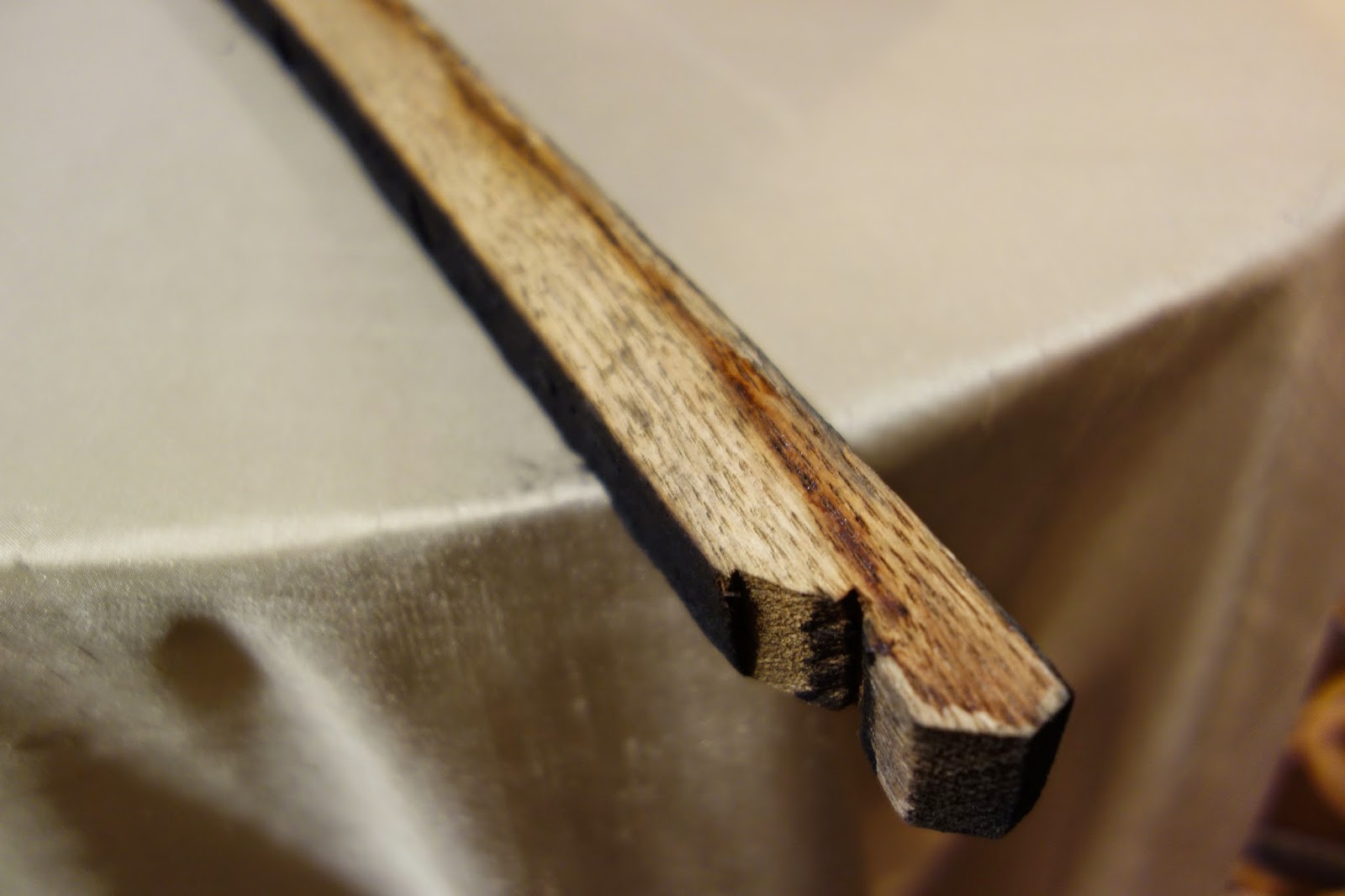 "Raising" a barrel: which means creating a barrel, is not an easy process. It must be watertight, and each cooper, as part of the tradition, is responsible for choosing their own staves. A barrel will contain about 32-34 staves, dependent on the width of the individual staves. Each copper is also responsible for doing their own grouting, to ensure the barrel is water tight. Charring the barrels is another important aspect of the process.

There are four basic levels of charring, though there has been some experimentation with higher levels of charring. Charring helps to kill any pests in the wood, and generally coopers are seeking an "alligator skin" in the wood, when the char starts to break. Charring creates a red layer in the wood, where the sugars have caramelized, and it can impact a reddish color to the spirit. Most bourbon barrels have a level 3 or 4 char. When those barrels are sent to Scotland, the char is scrapped out and a new charring is done, though usually only to level 1 or 2. Even the ancient Romans sometimes charred wood, though they didn't  have much understanding of the chemistry behind it.

Our final tasting was a comparison of three bourbons, using a rye recipe, which were similar except for a single difference, the location of the barrel within their storage warehouse. One bourbon was stored on the first floor, the second on the 5th floor, and the third on the 9th floor. Though that might not seem like a significant difference, it is because of temperature variations. The higher floors tend to be warmer, so there is more penetration of the bourbon into the barrel. And it proved to be the case in this tasting, that the 9th floor bourbon had the woodiest of tastes. This is why Four Roses Distillery now stores their bourbon on a single floor, to avoid such temperature fluctuations.

Barrel maturation is a fascinating topic, and I look forward to the results of further experimentation and research.
Posted by Richard Auffrey at 11:03 AM