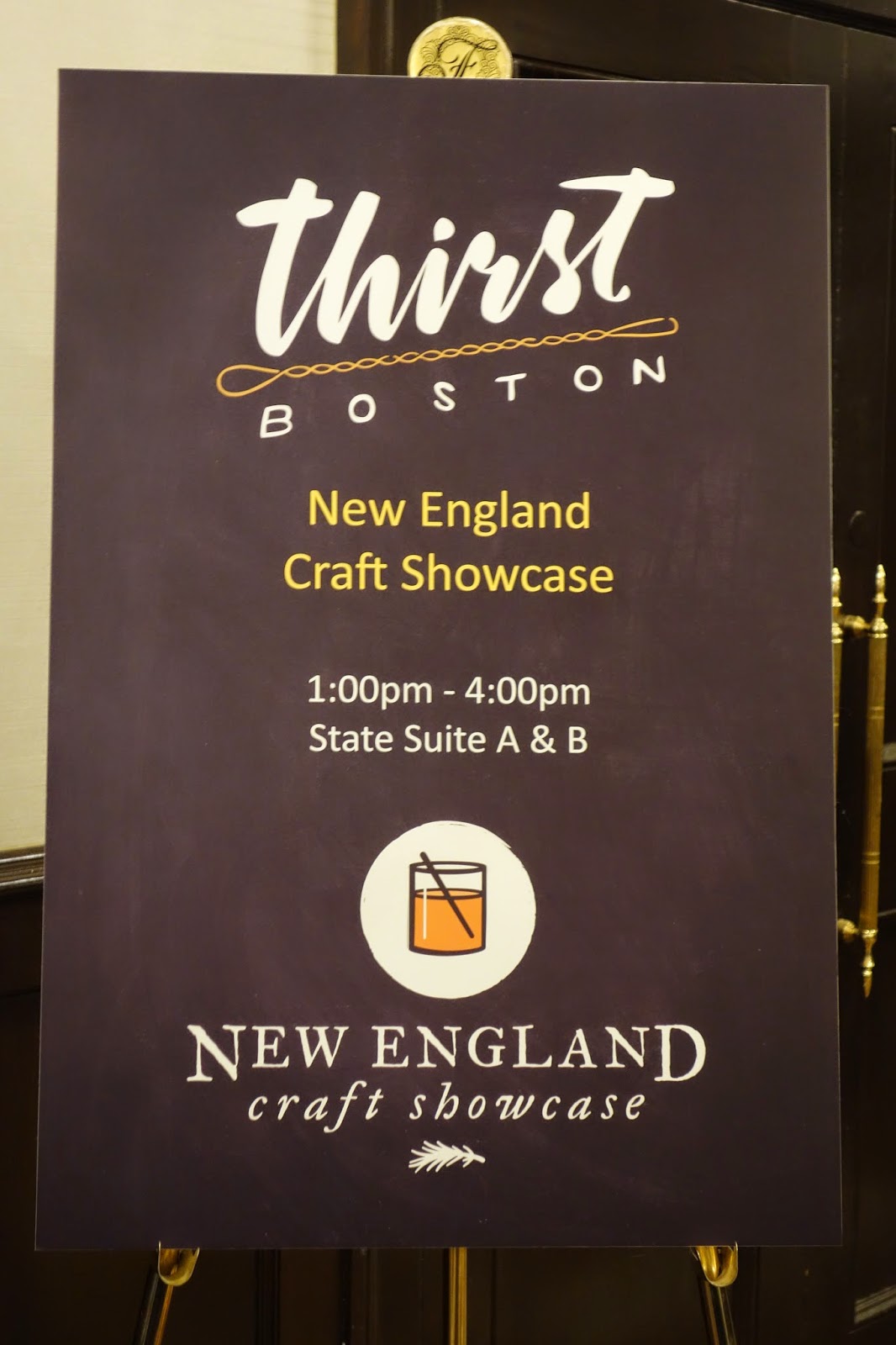 These local distilleries and cideries are still all relatively young, and they are continuing to gain experience all the time. A number of them are trying to use primarily local ingredients, supporting local farmers and purveyors. They are willing to experiment, to take chances, on what and how they produce. In some respects, it is a return to the origins of alcohol production in the U.S., when many farmers had their own private stills and used their excess grains to make alcohol. I'm going to highlight some of the drinks which most impressed me, but always know that personal preferences vary, and it is well worth exploring all of the products of these local distilleries and cideries. 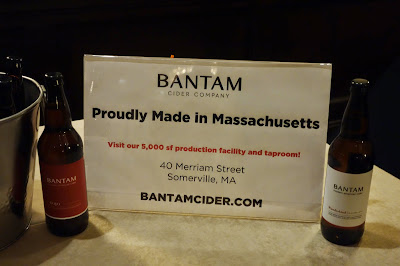 I'm a fan of the ciders of Bantam Cider, having written about them multiple times before. They didn't have anything new at the Showcase, but their existing ciders are delicious. 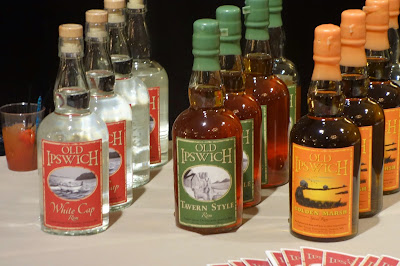 I've also written about Turkey Shore Distilleries, which is based in Ipswich, Massachusetts, and they make a line of rums. My favorite of their rums is the Old Ipswich Tavern Style Amber. At the Showcase, they offered a Barrrel-Aged Hemingway Daiquiri, made with their Ipswich Tavern style rum, Luxardo maraschino liqueur, lime, fresh grapefruit, and simple syrup. The cocktail was also aged in charred American oak for 3 weeks. It was delicious, with some added depth of flavor from the barrel aging. 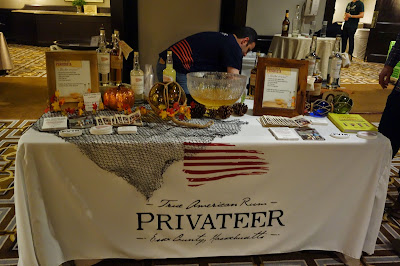 Privateer Rum is another rum distillery in Ipswich, and I've written about them as well. Their Silver Reserve White Rum is my favorite of their portfolio. They make a gin now too, though I didn't sample it. 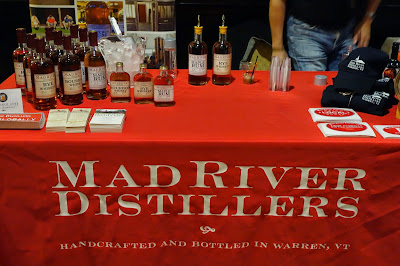 Mad River Distillers, located in Vermont, saw its origins in 2009, when there was a discussion on starting a distillery to produce apple brandy. After some analysis, they decided it wasn't a viable enough business, but it would work if they produced a number of different spirits. The company formed in 2011, and they use a dedicated fruit brandy still, a modified lambic still, to produce their range of products. They believe this type of still allows people to taste the grain in their products. They also want to use local ingredients, when possible, which are organic and non-GMO. They use fair trade sugar, and there is excellent, pure water on their property.

I tasted three of their products, including a Bourbon, Rye and Maple Rum, all priced at $50. This is the price point where they feel the average person will still be able to buy their products. They plan on producing an apple brandy at some time. Their objective with their flavored alcohols is to tease with the flavors, so that nothing dominates over the rest of the flavors. All of their alcohols are also at 96 proof, partially so if you add ice to the drink, it won't dilute it too much.

Though I'm not a huge maple fan, their Maple Rum, which is aged for 4-6 months in oak barrels, was pleasant, the maple flavor being very restrained, definitely a tease. The Bourbon uses 68% heirloom corn from Vermont, as well as some wheat, oats and barley. It has a blended age of about 9 months. They use an heirloom corn as it has lots of flavor, as opposed to some of the generic corn on the market. And the bourbon does present a strong corn flavor, with plenty of sweetness, but balanced with some spice and herbs. My favorite was their Rye, which uses 100% rye from Massachusetts, It had a spicy, interesting taste, full of flavor, though adding a bit of water brings out the flavors even better, 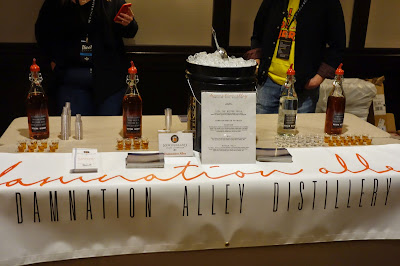 Damnation Alley Distillery, based in Belmont, Massachusetts, was founded in 2011, and they make whiskey and vodka from all local ingredients. They are a very small distillery, though that also gives them the ability to experiment frequently, to make small batches of whatever they desire. I tasted four of their products, a bourbon, rye, single malt and vodka, basically all which have been aged for less than six months in small barrels. They do have future plans to release some whiskey which has been aged longer.

The Nick The Sipper Vodka is made from barley grown and malted in Hadley, Massachusetts (and the grains for all of the whiskies were also from Hadley). It had a sweeter taste, and might be good for cocktails. The Bourbon, a blend of 66% corn and the rest barley, uses an heirloom variety, Longfellow Yellow. It presents some sweet vanilla and brown sugar flavors, and is also something that might work well in a cocktail. The Single Malt Whiskey, made from 100% barley, has some baking spices notes with hints of chocolate. My favorite though was their Rye, made from 72% rye and barley. It was smooth and spicy, more savory in taste, with a lingering and pleasing finish. 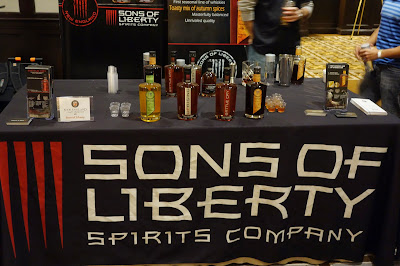 Sons of Liberty, located in Rhode Island, wants to produce whiskies from special beers, as well as seasonal whiskies. At the Showcase, they presented one of their seasonal whiskies, the Pumpkin Spice Whiskey. Over 2000 pumpkins are used in each batch, and they blend a single malt with winter spices. It smelled like autumn in New England, with fresh pumpkin and baking spice aromas, and it tasted basically the same. An interesting flavored whiskey. My favorite was their Battle Cry, a single malt based on a Belgian-style ale. It has about 20% rye, and was smooth and easy drinking, but with a nice complexity of flavors, and plenty of spice and a mild sweetness. A nice sipping whsikey that would make some tasty cocktails too. 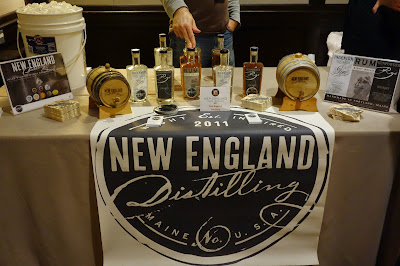 New England Distilling is owned by Ned Wright, who also is the distiller, and his family first got involved in distilling about 150 years ago. Ned currently makes a gin, rum and rye whiskey. My preference was for the Eight Bells Rum, a colonial style rum made from molasses and distilled in a pot still  It is also aged for two years in an old Jim Beam barrel. It had a very pleasing,and slightly sweet taste, with flavors of vanilla, butterscotch, caramel, baking spices and dried figs. It can be enjoyed on its own or will do well in cocktails as well. 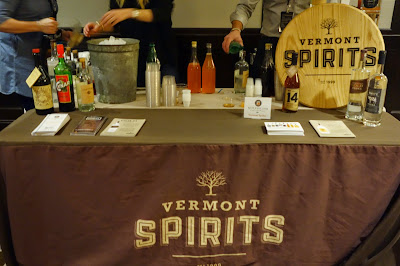 Vermont Spirits, located in Quechee, Vermont,  produces a portfolio including vodka, bourbon, whiskey, gin and more, all from ingredients purchased from Vermont farms. The Vermont White Vodka is made from whey, the sugar source in cow's milk. It has a clean and fairly neutral taste, with a hint of sweetness to it. 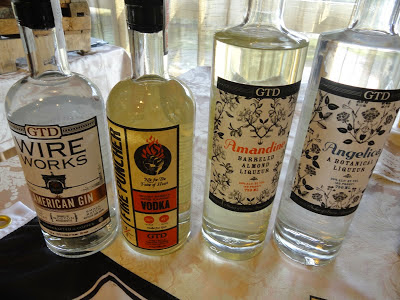 I've written previously about Grand Ten Distilling, which is located in South Boston, but I got to try some new products at the Showcase. The Craneberry Liqueur begins with white rum which is infused with Cape Code cranberries and then aged in Cabernet Sauvignon barrels. It is a little sweet, with lots of fresh cranberry flavors and some mild notes of spice. This would make a very good mixer for a cocktail. The Fire Puncher Black Vodka is a collaboration with Taza Chocolate. Starting with a chipotle pepper infused vodka, they add some Taza nubs and shells, and it ages in an ex-bourbon barrel. With an alluring aroma, this is like a mole sauce in a bottle, a spicy chocolate mix that has a natural taste, not like the artificial flavored vodkas out there. Another excellent cocktail mixer.
Posted by Richard Auffrey at 3:30 AM