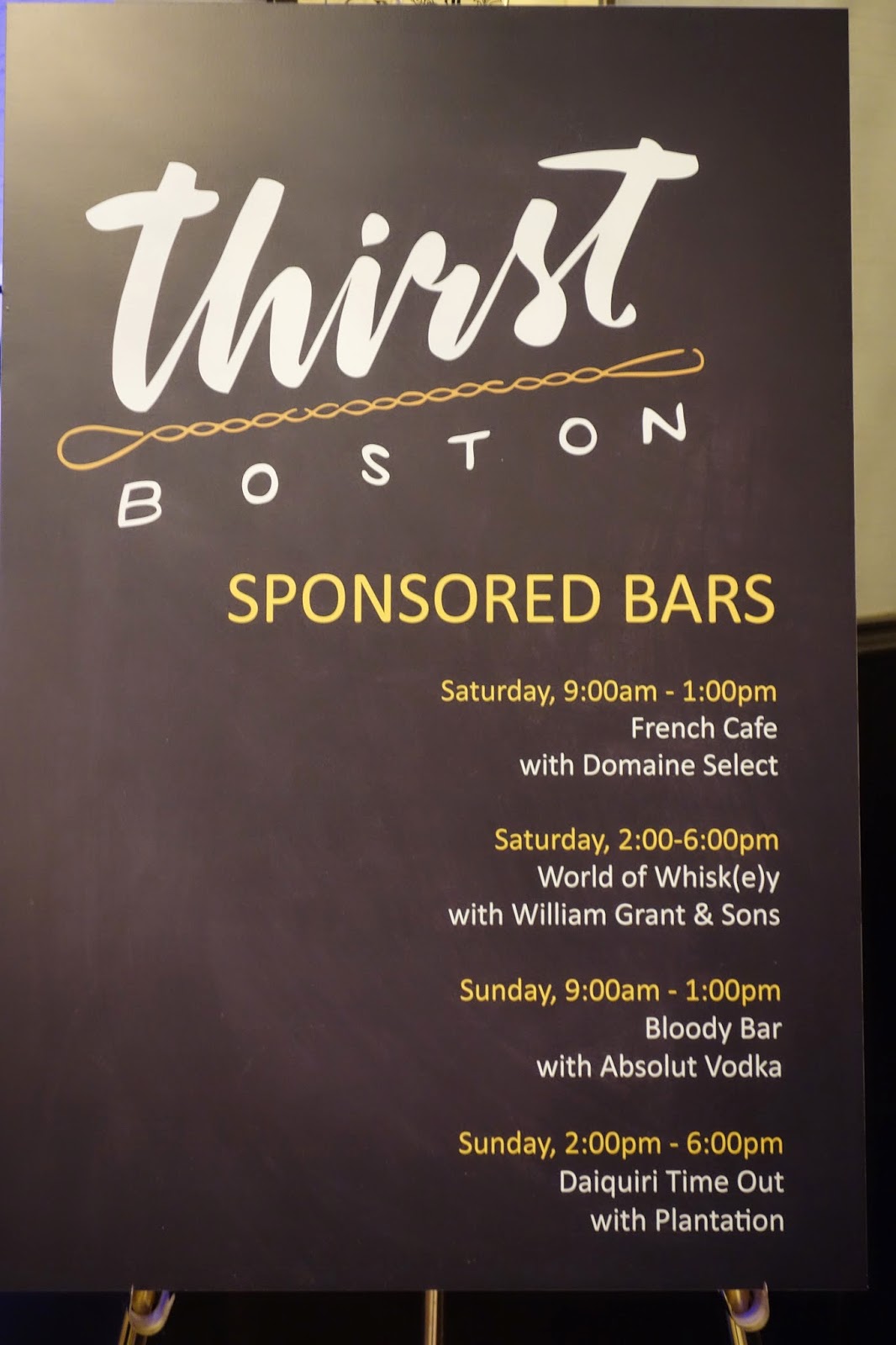 As I mentioned previously, on Saturday and Sunday, Thirst Boston held two Sponsored Bars on each day, running from 9am-6pm. Essentially, you could taste some spirits neat or in one of a few different cocktails. And you weren't limited to a single taste. You could easily taste all of the different cocktails they were offering. I've already mentioned three of the Sponsored Bars, and now I'm going to discuss the fourth one, the World of Whisk(e)y Bar, which presented six whiskies and one intriguing liqueur from the portfolio of William Grant & Sons. 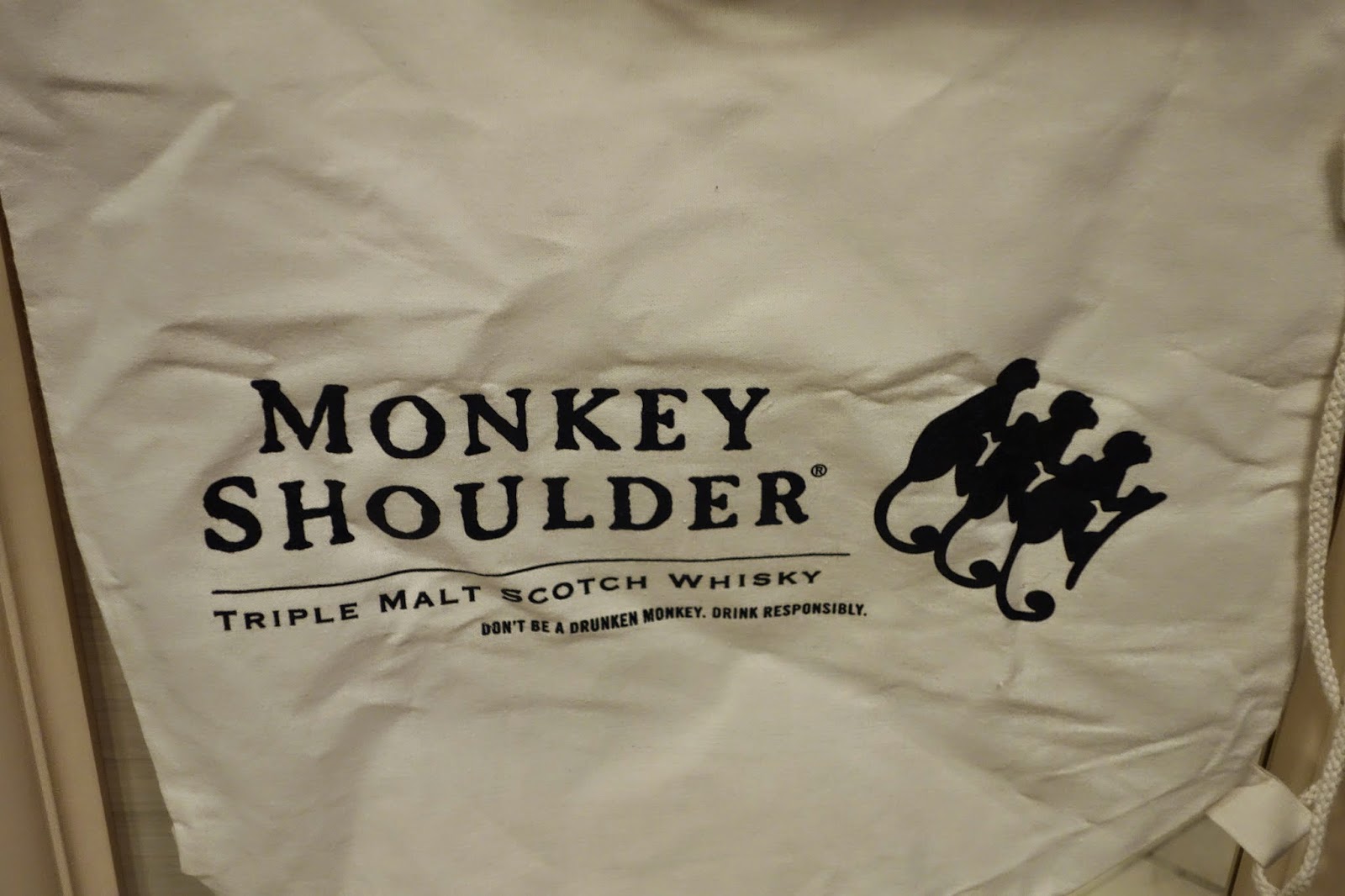 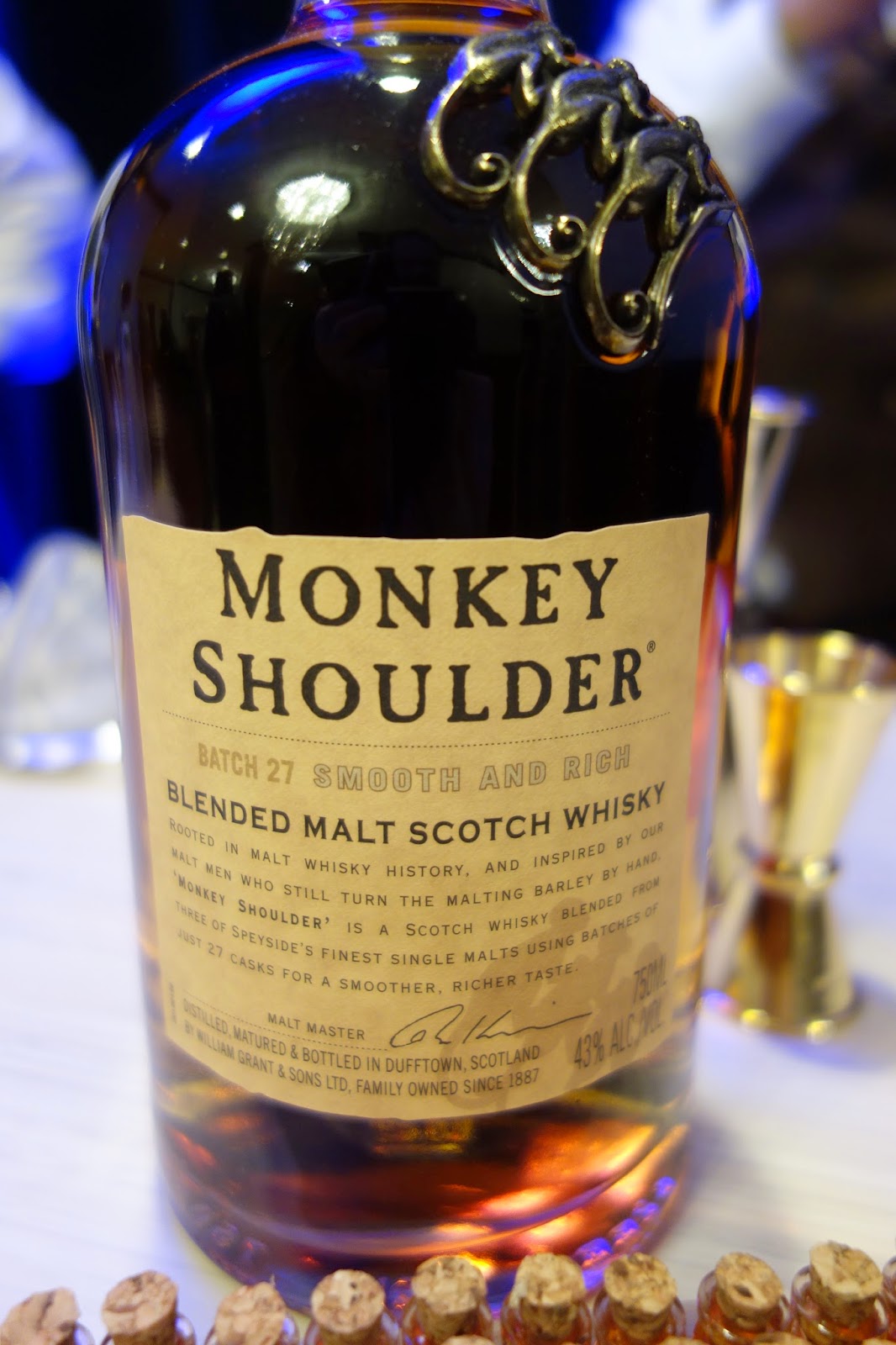 A "Triple Malt" whiskey, said to be the "naughty nephew" of Scotch, this is Monkey Shoulder. When men used to work long hours in the malt house, regularly turning the malt, they sometimes acquired a condition, known as "monkey shoulder," where one of their arms hung down longer than the other. With the use of more commercial malt, this condition is much less common, but the term was chosen for this whiskey, to pay homage to those old malt men. Monkey Shoulder has been in the U.S. for about three years.

Triple Malt is not an official designation, and refers to the fact that this is a blended Scotch whiskey, made from three different, Speyside single malts, from Balvenie, Glenfiddich, and Kininvie. Each single malt is aged separately and then they are blended together, and aged for an additional three to six months. With a 43% ABV, this is a mellow and easy drinking blended whiskey, with pleasing flavors of caramel, vanilla and mild spice notes. This can be enjoyed on its own, of mixed into a variety of cocktails. Recommended. 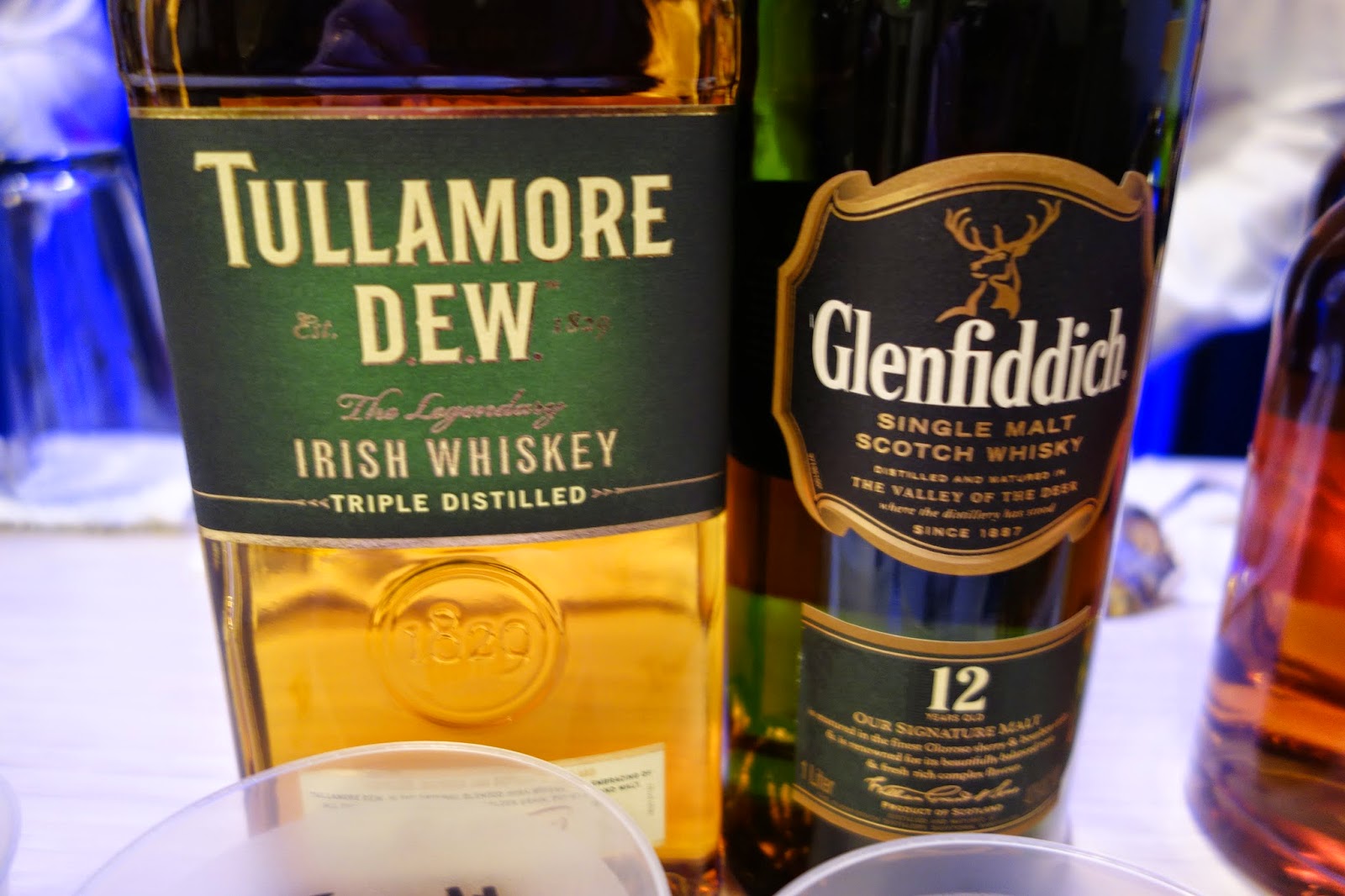 The Glenfiddich Single Malt Scotch 12 Year Old is from the distillery that is supposed to have exported he first single malt from Scotland to the U.S. in 1963. To commemorate that occasion, they recently produced a special "1963" bottling. The distillery was founded by William Grant in 1887. This Single Malt was matured in American bourbon and Spanish sherry casks for at least 12 years. It has a pleasing aroma of spice, vanilla and hints of pear/ On the palate, it is light and elegant, with tasty flavors of vanilla, pear, butterscotch and spicy accents. There is some nice complexity in its taste and it possesses a lingering finish. Another recommended whiskey.

The Tullamore Dew Irish Whiskey extends back to 1829, to the town of Tullamore, and the "DEW" derives from the initials of an early owner, Daniel E Williams. They just built a new distiillery which opened in September 2014. This whiskey is made from three varieties of grain, is triple distilled, and blends three types, pot still, malt and grain. It is aged in used bourbon and sherry casks. Though it is light and elegant, it has a more intense flavor than the Glenfiddich, with flavors of citrus, spice, vanilla, and salted almonds. Also recommended. 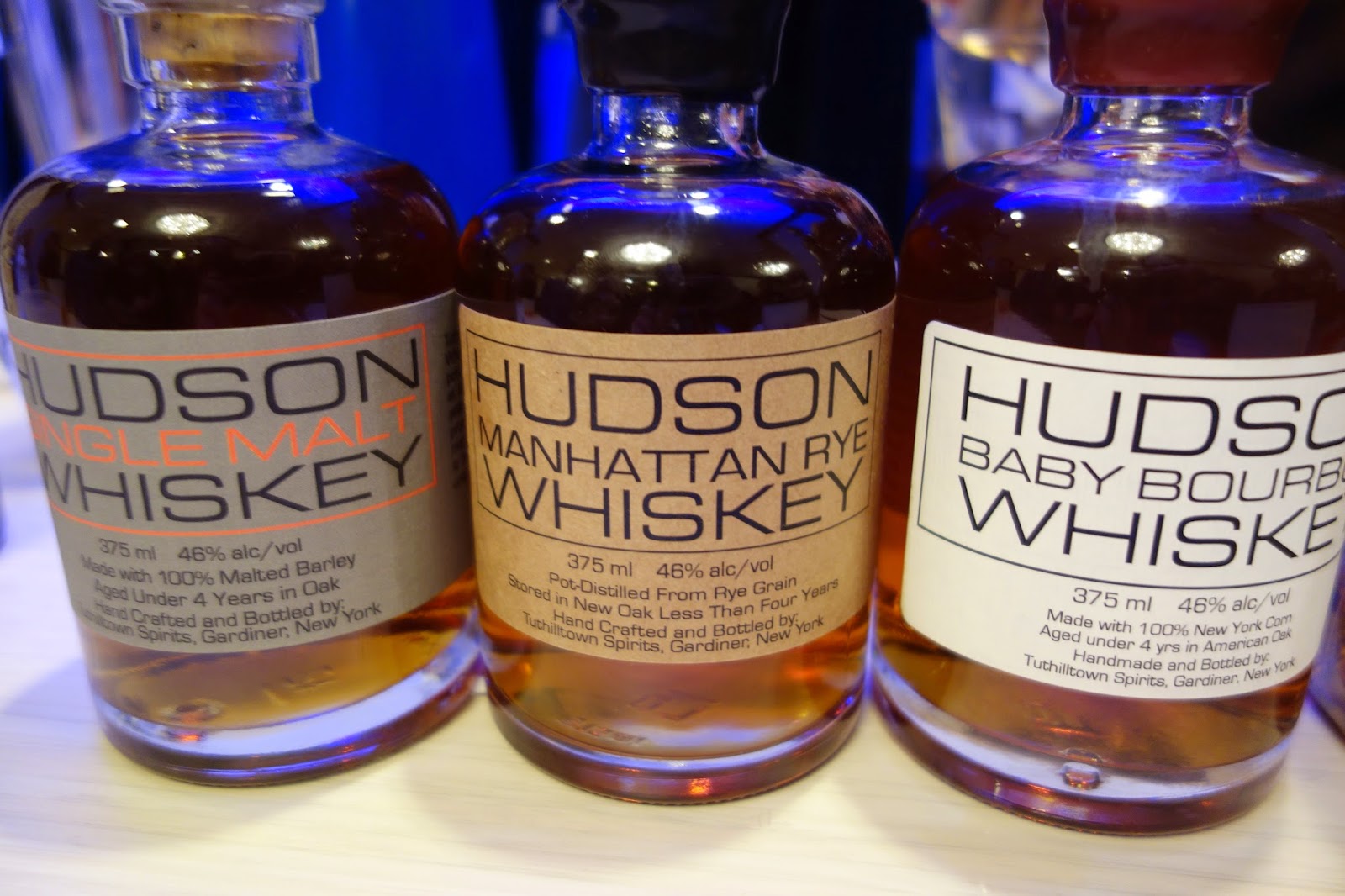 Tuthilltown Distillery, located in the Hudson Valley of New York, was established in 2005, and produces a number of different spirits, including vodka, gin, whiskey and cassis liqueur. They source about 90% of their ingredients from within ten miles of their distillery, celebrating the local. Three of their whiskies were available for tasting

The Hudson Baby Bourbon Whiskey is a blend of 80% corn and 20% malted barley, and 50% of the corn is an heirloom variety though all of the corn is from New York. It is aged in small American oak barrels. It is mild and lightly sweet, with restrained notes of vanilla and spice. The Hudson Single Malt Whiskey is made from 100% whole-ground malted barley and pot-distillled in small batches. It is then aged for about 4 years in American oak. It is easy drinking and relatively smooth, with typical whiskey flavors. My favorite of the three was the Hudson Manhattan Rye Whiskey, which is made from 95% rye. It is spicy and intriguing, with a subtle melange of other flavors, with hints of fruit and caramel. It is intense and complex, a tasty rye which I strongly recommend. 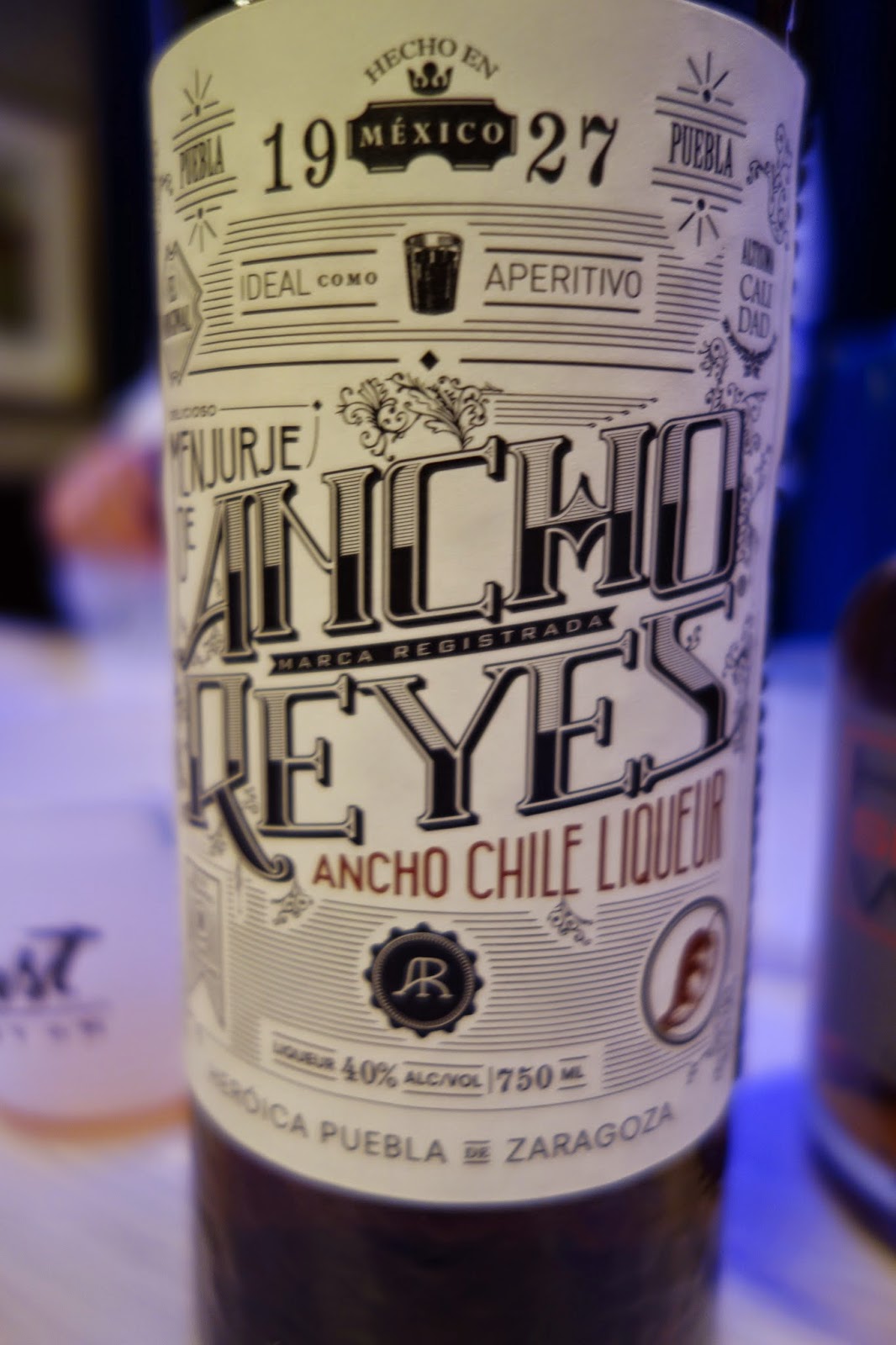 The Ancho Reyes Ancho Chile Liquer, from Mexico, relies on the signature crop of Puebla, the chile poblano. When this chile is dried, it is known as the ancho chile. This liqueur is lightly sweet with a spicy hot kick which will tingle your mouth but won't burn it. There are some other mild flavor notes beneath the spice, including some fruit and herbs. There are no artificial tastes in this liqueur. It is a very interesting liqueur which would be excellent in the right cocktail to add some heat. Recommended. 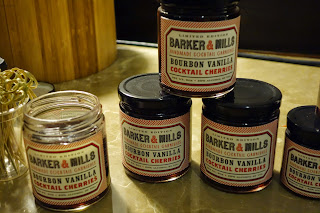 While in a room near the Boston Shaker, there was a tasting of Barker &; Mills Bourbon Vanilla Cocktail Cherries. I spent a little time speaking with one of the owners, Barker,who told me that their company had been around for four years. He is a cocktail enthusiast and couldn't find cocktail cherries that appealed to him, so he decided to experiment and create his own. His family is from Iowa, and has a farming background, which helped lead him to trying to create his own cocktail cherries.

He uses sweet cherries,most from Washington and Michigan, and he buys them from local purveyors. As he only uses cherries in season, then there is only a short time each year that he can make these cherries. Barker pits all the cherries by hand, and in fact, essentially does everything by hand, and uses Evan & Williams Black Label Bourbon;. He makes about 35 cases each year, and a 9 oz. jar sells for $16. Due to the huge demand for this cherries,he is selling them this year through a lottery system. The cherries are tasty, not overly sweet, with pleasant flavors of vanilla and hints of bourbon. The bourbon flavor is mild, and wouldn't affect the taste of a cocktail too much.

In the future, he may expand, though it might mean he won't be able to do everything by hand. He also is interested in creating his own cocktail onions.
Posted by Richard Auffrey at 3:00 AM