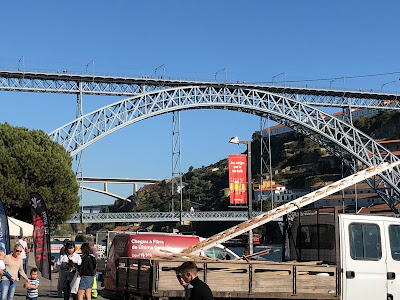 On my first day in Portugal, we spent some time walking around the city of Porto, seeing some of the historic sites, Above, you can see the Ponte Dom Luíz, a a double-deck metal arch bridge, built in 1886, that spans the Douro River. The bridge joins the cities of Porto and Vila Nova de Gaia, and we walked down part of the upper deck and later also traveled to Vila Nova de Gaia, to visit the lodge of Cockburn's Port. 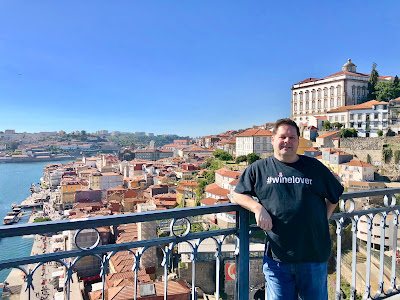 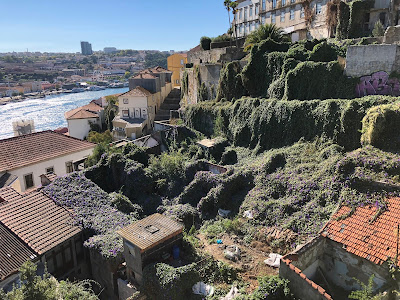 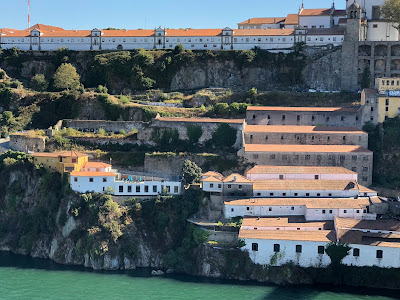 Vila Nova de Gaia is home to numerous Port Wine lodges, where Port is generally aged and stored. These are not commonly referred to as cellars for a number of reasons. First, the term "lodge" is derived from the Portuguese word "loja" meaning a shop or store. Second, the Portuguese often refer to these places as armazém, which basically translates as "warehouse" or "storehouse." Third, Port is often aged above ground. 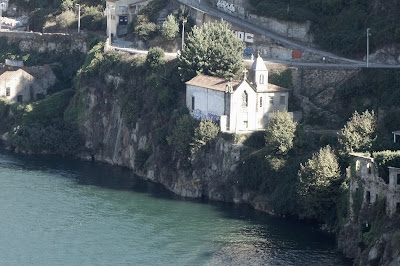 What a precarious location for this church. Let's hope it doesn't fall into the Douro. 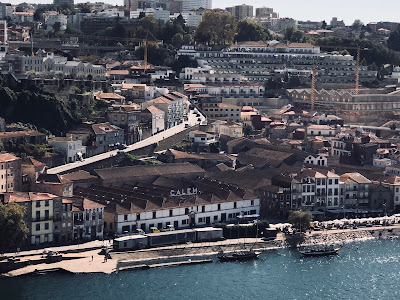 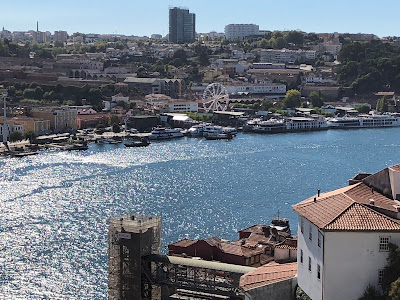 Due to the extreme heat of the Douro during the summer, most wineries felt that area wasn't conducive to the proper maturation of their wines. As such, they decided to ship their wines down to Vila Nova de Gaia for maturation, where the temperatures were cooler and more consistent throughout the year. 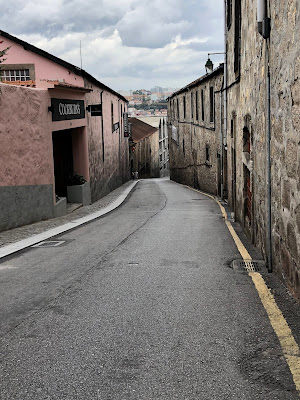 Down a narrow street in Vila Nova de Gaia, we stopped at Cockburn's Port for a tour, joining a public English-language group, and tasting. This visit was a change from our scheduled itinerary and coincidentally, I'd recently reviewed one of their Ports the week before I departed for Portugal. Check my prior article, Cockburn’s​ ​Special​ ​Reserve​ Port: Break Out The Cheese, Chocolate & Twizzlers, for more background and information on this winery. 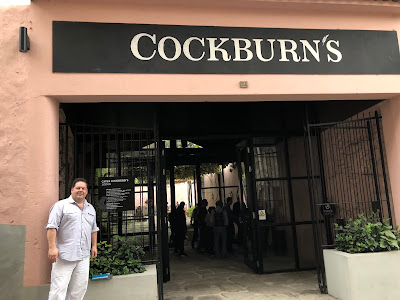 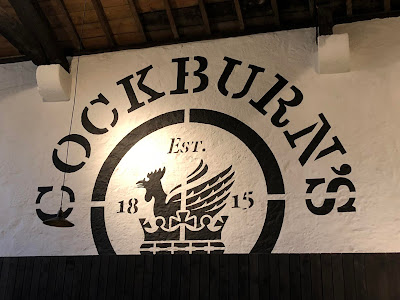 All of Cockburn's quintas are "A" rated, the top quality rating for estates. 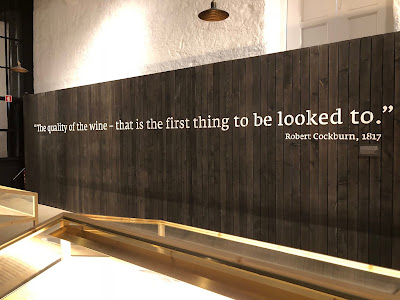 Near the entrance to the lodge, there are some historic display cases, holding old documents that document the lengthy history of the winery. The walls also have a number of relevant quotes. 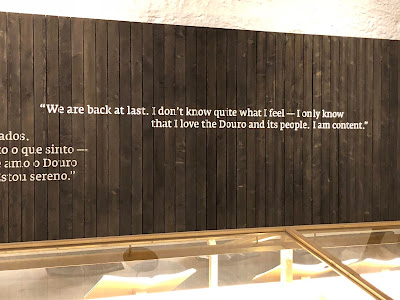 Cockburn's is allegedly the largest lodge in Vila Nova de Gaia, storing over 9 Million liters of wine, equivalent to about 12 Million bottles. 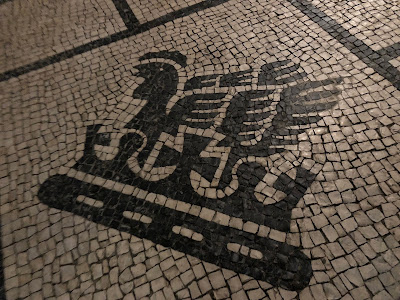 In the production of their wines, they generally use indigenous yeasts, rarely inoculating, and much of the grape crushing is done by European robot lagares (size 42). They rarely do any human foot treading, except for their Vintage Ports. Their House Style of Port was described as robust, sweet, and spicy, with deep color and deep fruit. 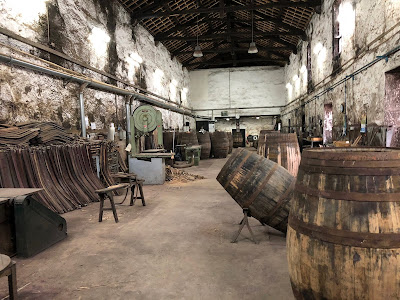 Cockburn's has their own cooperage, where they make and repair barrels, and they currently possess over 6,000 barrels, of French, U.S. and Portuguese oak. The average age of their barrels is 60-70 years with their oldest barrel, still in use, being from 1900. Most of the barrels are 600-650 liters, with some larger vats as well, such as 30,000 liter barrels used for their Ruby Port. If a barrel is damaged, they will replace the staves with seasoned, older staves. 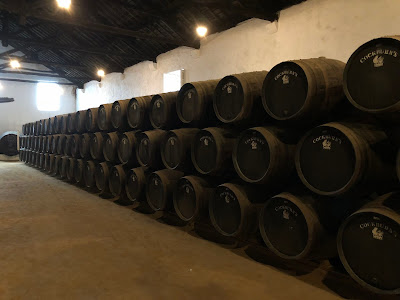 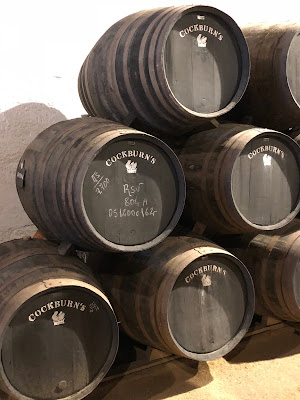 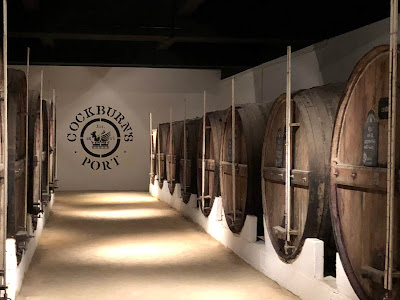 I was informed that even though 2018 was a challenging vintage, due to rain, hail and extreme heat, it still might be the best vintage of the century, better even than 2011. I'll note that this was contrary to what I heard from other wineries in the Douro region. 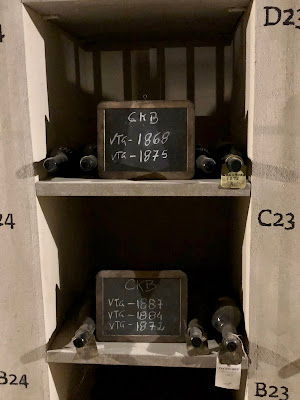 In one part of their cellars, you could see wines from the 19th century, as far back as 1868. 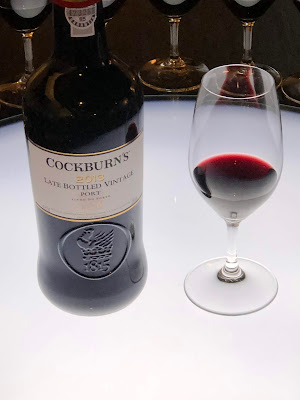 We then did a tasting of three Ports, including the Special Reserve Port. The 2013 Cockburn's Late Bottled Vintage was intense, with bold flavors of ripe plums and black fruit, mild spices and a balanced sweetness. It was smooth and easy to drink, with a lengthy, pleasing finish. 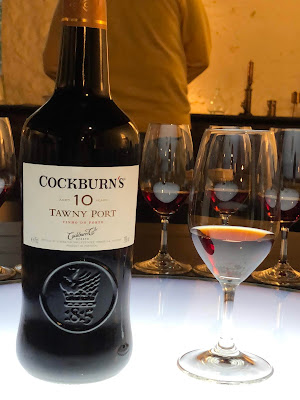 The Cockburn's 10 Year Old Tawny Port possessed a lighter, more brownish color, with a delightful aroma and an excellent blend of flavors, including caramel, nuts, spicy notes, and dried fruits. It was silky and a bit sweeter than the LBV, but still nicely balanced and the fortification was well integrated. This is a fine example of a 10 Year Old, and highly recommended.

I'll also mention that I got some dark chocolate to pair with these Ports, and everyone at my table thought the Ports shined even better with some chocolate. And I'm sure they will share chocolate and Port with their family and friends in the future. 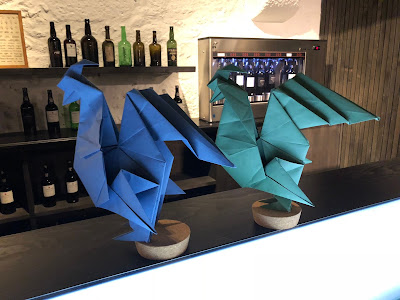 Though it was interesting to visit this lodge, our guide could have been better, as he spoke much too fast and for too long at any one time, making it more difficult to ask questions as you didn't want to interrupt him mid-stream. He was good about answering questions once he finished talking, but you might forget your question while you waited for him to finish his spiel.

If you are a Port lover, you really need to visit the lodges of Vila Nova de Gaia . It is an enlightening experience, and you'll better understand how this compelling wine is created.
Posted by Richard Auffrey at 3:00 AM

Do you want to invest in cryptocurrency mining then we recommend your to buy ASIC Antminer S9 for Sale at very big discount,
you can make high profit while doing this interesting activities of mining. order it direct from china

Indeed an informative post! This is what we call the real beauty. It seems you had great time in Cockburn’s Port. Have you travel to Vila Nova de Gaia Portugal ever?