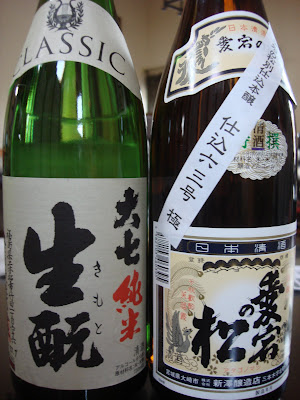 I always relish the opportunity to try a new Saké and recently had the pleasure to join Gary of Classic Wine Imports at Mootone, a Japanese restaurant in Andover, to taste a few. Gary was showing the owner of Mootone a couple Sakés, to see if he might be interested in carrying them. I was fortunate to be able to join them.

Mootone has a good-sized and diverse Saké list, and the owner personally tastes everything that he stocks. Each Saké must meet his own personal standards before he will sell it at the restaurant. He won't just accept the recommendation of a salesman. That is certainly a very respectable philosophy.

We also got to eat some sushi and tempura with the Saké. All of the sushi seemed fresh, good-sized and very tasty, from the maguro to the unagi. The tempura really impressed me though, possessing a very light and crispy batter, just the perfect texture. Far too many places use a heavy tempura batter which seems to defeat the intent of having a light, fried dish. I do often use tempura as a test for restaurants, as I have found those with an excellent tempura often do everything else well too. Based on the sushi and tempura, I definitely need to return to Mootone as I exect I will very much enjoy the rest of their cuisine. 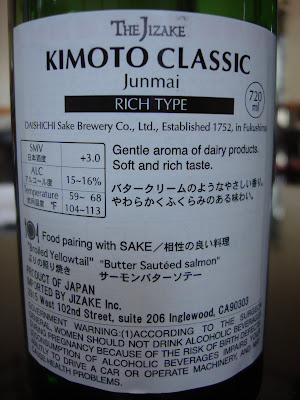 The Daishichi Junmai Kimoto Classic is made in the Fukishima prefecture, from a brewery that was founded in 1752. It is one of the few breweries that produces kimoto-style Saké. This Saké has had its rice polished to 69%, and an SMV +3, making it slightly dry. It was also aged for an additional year prior to its release.

The taste? Think of shaved truffles atop risotto, a fragrant and earthy mix with a touch of rich creaminess. Because of its strong flavors, this is probably not something that will appeal to those new to Saké. But those who already enjoy it, should really enjoy this brew. Plus, it is very food friendly, really going well with the tempura. 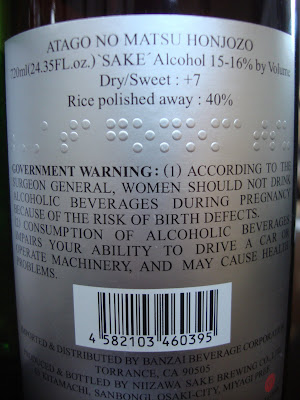 The Atago No Matsu "Waiting Love" Honjozo is produced by the Niizawa Jozo Ten brewery, established in 1873, and located in Osaki, Miyagi. The rice, Yamada Nishiki, was polished to 60% and it has a SMV +7, making it very dry.

The taste? Think of a smooth, placid lake but where a fish waits at the bottom to strike. The nose is rather muted, with only faint hints of citrus, and the taste is smooth and clean. Except that there is some alcohol on the finish, striking out of the depths, yet that alcohol taste vanishes with food. With its mild, clean flavors, this is a good Saké for those new to it, yet you definitely should have this with a meal.

In the end, the owner chose not to buy either of these Sakés, though he enjoyed them both. He is currently seeking a certain style of Saké to replace one that he must take off his list as it is no longer available. So the hunt goes on.

For me, the Daishichi Junmai Kimoto Classic was the best of the two.

Posted by Richard Auffrey at 11:30 AM

I love Sake. It really hasn't caught on in our area. We had a wine/sake bar that tried to duke it out for a while, but they folded. If you want Sake here, you have to go to a Sushi place. I can't even say that I see it at the liquor store or grocery store.

Is that braille on the back label? Never seen that before... on a bottle of sake or wine!

Thanks for your comment Drinknectar. Sake still needs to spread more across the U.S. There are plenty of areas where it is difficult to find. The Boston area fortuntely is getting better, but still has far to go.

Randy:
It might be, though I have so far been unable to verify it. I'll keep trying though.

No worries, but I'd be interested to know if it's real braille and also know what it says! :)

Could be something funny!