Sushi: Food for the Eye, the Body and the Soul 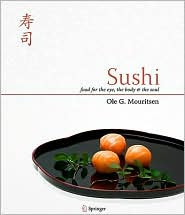 "An old Japanese saying has it that when you taste something delicious for the first time, especially the first fresh produce of the season, your life will be prolonged by 75 days." (p.5)

I love Japanese cuisine, including sushi, and find it to be especially compelling. Its simplicity, its emphasis on fresh, seasonal ingredients, its underlying philosophy, and much more appeal to me. Fortunately, this cuisine is becoming more prevalent all across the world. At its most basic, this cuisine is delicious, which may be its most important aspect.

A fascinating book concerning sushi and Japanese cuisine has recently been published and it is sure to be of interest to most food lovers and cooks. Sushi: Food for the Eye, the Body and the Soul by Ole G. Mouritsen (Springer-Verlag New York, LLC, October 2009, $35) is a large-sized, hardcover book of 330 pages. Mouritsen is a Professor of Biophysics at the University of Southern Denmark. He is also an elected fellow of the Royal Danish Academy of Sciences and Letters, the Danish Academy of Technical Sciences, and the Danish Gastronomical Academy.
Though Mouritsen may not seem like an appropriate author for such a book, he does have a culinary background too. In his spare time, he cooks, especially trying to advance his knowledge and skills in molecular gastronomy. Plus, he has long been addicted to sushi, trying it at restaurants all over the world.

Though this book is a cookbook, it is certainly far from ordinary. "My passion for sushi is grounded in a fascination with how one can use simple, healthy and pure raw ingredients to compose a meal that will inspire a haiku moment." (p.5) A haiku moment is "a special, brief second when one has a sensation of great insight and enlightenment and at the same time is aware of the transitory nature of the material world." (p.3) What a worthy goal for any type of cuisine.

The book is divided into nine main sections, each with its own subsections. It is very comprehensive, starting with the philosophy behind sushi, moving through the science of sushi and ending on the practicalities of preparing sushi. There seems little about sushi that is not covered in this book. The book is also aesthetically pleasing, with plenty of excellent photos and diagrams.

There is a section on related items including edible seaweed, tofu, soy sauce, miso, sushi rice, wasabi and other Japanese spices. Excellent descriptions of these items are provided along with information on the science behind their flavors and effects. The book then moves onto a discussion of preserving fish, including freezing, salting, marinating, following up with a section on tsukemono, the art of pickling.

The practical section then arrives, covering everything from the tools and equipment needed to prepare sushi down to all the various styles of sushi prepartion, such as nigiri-ushi to gunkan-maki. The instructions are easy to follow making this section very useful. You won't become a sushi master by reading this book, which takes years to accomplish, but you certainly will be able to produce some tasty and presentable sushi.
After these lessons, there is a list of the most common seafood used for sushi. Though the book contains a brief article discussing the world-wide diminishing supply of fish, few particulars are provided. This is an area where the book fails. As an example, the tuna section fails to mention how endangered they are, mentioning only how dolphins may be caught in tuna nets and that you should try to thus avoid tuna caught by that method. As the author seems concerned about conversation and sustainability, I think he should have discussed the specifics for each type of seafood he discussed.
Sushi does not stand alone and the author also discusses side dishes such as edamame and mushrooms, soups and salads, and even desserts. Plus, he talks about beverages to accompany sushi, his personal choice being green tea and thus he adds a section in the book on green tea. Though he mentions sake, his personal choice is to drink it warm, which would not be my recommendation.
Overall, this was a very informative and fairly comprehensive book on sushi and Japanese cuisine. It is well written, fairly easy to understand, and visually appealing. Though I think it failed on the issue of sustainable seafood, this book still has much to offer. Sushi is obviously a true passion for the author and that passion emanates from every page. I recommend this book, and I am sure I will use it plenty of times in the future.
Posted by Richard Auffrey at 6:00 AM

I've always wanted to learn how to make sushi... I obviously have a LOT to learn but this looks like a great starting point!

I never realize how complex sushi really is... I also like the detail you went into analyzing the book and even some of its shortfalls... great review!

Thanks Randy. This would be a great resource if you want to learn to make sushi. Lots of practical advice.

Another, quite different book, is Hiroko Shimbo's The Sushi Experience. I met her at the FCI Sustainable Sushi event about a year ago. And will always recall the delicious things she made. I lugged her book w/me to get her signature!