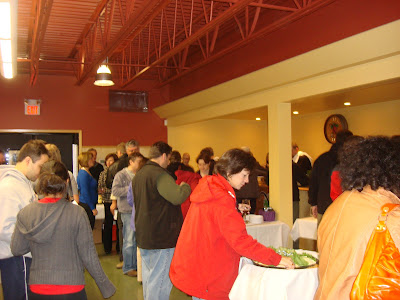 Seeking some excellent but inexpensive Saké? If so, I have a new place to recommend to you.

Yesterday, I attended the Grand Opening of Wine ConneXtion, a new wine store in North Andover. I previously recommended this new store, especially because of their incredibly low prices. I was glad to see that the store has gotten even better since my initial visit, and I continue to highly recommend this place.

The Grand Opening was well attended and the store had plenty to interest their guests. First, there were over 50 wines available for tasting. Wine prices ranged from $6.99 to $84.99, and all of the prices were cheaper than you will likely find anywhere else locally, or even in New Hampshire. A few of my favorites of the tasting included: 2006 Pride Merlot, 2008 Rombauer Chardonnay, 207 Evodia Garnacha, and the 2007 San Marzano Primitivo. 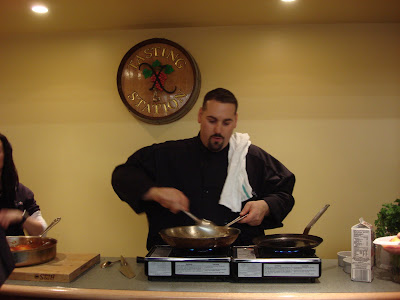 Second, besides some cheese and crackers, Chef Tom Grella from the Food Network's Next Star series prepared several delicious dishes on the premises. Working non-stop through the wine tasting, Grella made dish after dish, including cheese ravioli in a spicy marinara sauce, a corn hash topped by roasted turkey and a BBQ cranberry sauce, seared scallop atop mashed sweet potato and gemelli in a white truffle cream sauce. The gemelli dish was my favorite though all of the foods were very good. It is always such an enjoyment to taste wines with good food.

As I perused the aisles of wine, I noticed they carried more wines than my last visit. For example, their special high-end wine room had more wines, including the Caymus Cabernet Sauvignon Special Selection (for only $99!). But what most thrilled me was to see they now carry Saké! 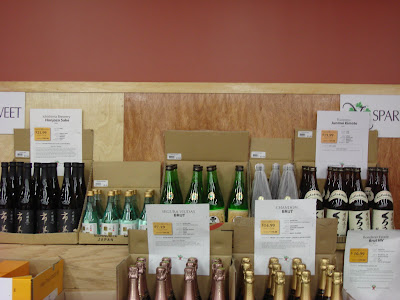 The owner, Sam Messina, wanted to bring in some Saké to the store and I gave him some recommendations. He brought in five of my recommendations, and will bring in some more too. They currently carry the following:
Ichishima Honjozo ($21.99)
Hakushika Junmai Ginjo (3ooml/$6.49)
Nishinoseki Tezukuri Junmai ($19.99)
Onikoroshi Wakatake Ginjo ($17.99)
Kurosawa Kimoto Junmai ($14.99)

These are all very good, and would be perfect too for those new to Saké. Plus the prices are excellent! For example, at other local stores, the Ichishima Honjozo is around $30 while the Hakushika is around $9. I bought several bottles to stock up on my dwindling supply and will definitely return for more.
If you have not visited Wine ConneXtion, then make the effort to do so. I like what the store has done, as well as the ideas they have for the future. You can't beat their prices, and with about 700 different wines, there is something for everyone. Why not buy some Saké too?

I've noticed that Caymus Special Selection is selling for $100... what's the deal? Are they just trying to compete given the issues with the economy right now or is there something wrong with this vintage?

Jeez, I feel weird responding to this but...

Wine Whore - The Wine Connextion is offering it at $99 because that's their regular price. It's not related to the vintage at all. Their goal is to be the lowest price in the area. Actually, this price is only about $25 below most other retailers' price.

It's not even the biggest bargain. There are many wines discounted even further. The Groth Cabernet Sauvignon, normally $65 around here, is selling for $35. How about Duckhorn Merlot for $38? The list goes on & on.