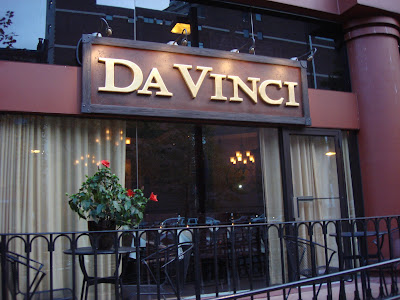 It is an intriguing international blend that somehow has produced a fine Italian restaurant. Start with a native of India who learned how to create Italian cuisine in Germany. Add in a native of Poland and place them both in Boston. You end up with the Da Vinci Ristorante, located just around the corner from Smith & Wollensky.

Recently, I received a complimentary invite to a wine dinner at Da Vinci, their “Connoisseur’s Tour of Italy,” a five-course meal paired with Italian wines. My good friend Dale, of Drinks Are On Me, was also there. I had wanted to dine here as everything I had previously read about Da Vinci interested me.

While there, I met and chatted with Chef Shingara “Peppino” Singh, a native of India who moved to Germany at the age of 16 and lived with an Italian family who owned an Italian restaurant named Leonardo Da Vinci. Chef Peppino discovered a passion for Italian cooking and began his education. At the age of 23, he moved to Boston, working at The House of Blues in Cambridge and La Campania in Waltham. After ten years at La Campania, Chef Peppino with long time friend, Wioletta Zywina, a native of Poland, opened Da Vinci Ristorante. I found Chef Peppino to be very friendly and down to earth, evidencing true passion when he discussed his culinary creations.

I also had the pleasure of meeting Daniel Burgio, the Northeast Division Manager of Domaine Select Wine Estate. Daniel discussed the wine selections throughout the evening, and as he sat next to me, he was also an engaging dinner companion. 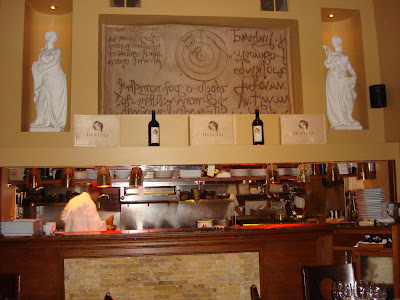 The restaurant is medium-sized with an interesting ambiance, that is both casual and elegant. The decor, including large statuary, avoids being kitschy and is more just fun. The kitchen is partially open and there is also a small bar where you can have a cocktail as well as eat. You could easily go here after work with a group of friends, or take a date here for a more intimate dinner. 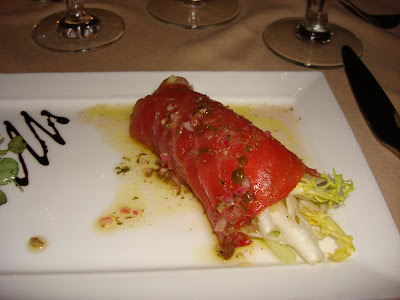 We began our meal with Voltini Tuna, filled with cucumber, fennel and frisee and served with a tomato water lemon sorbet finished with red onion caper black olive vinaigrette. The slice of tuna was quite large, and very tender. As I love tuna, I found this to be delicious, with its clean flavors. The sorbet was also very good. This dish was paired with a Fantinel Ribolla Gialla, an intriguing wine with a more unique taste which I enjoyed. 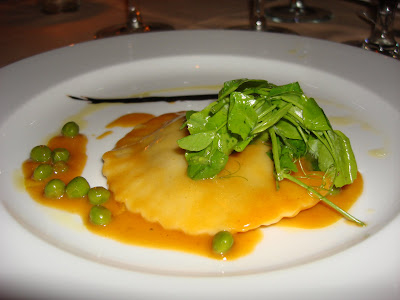 I was very impressed with our second course, Duck Confit and Foie Gras Ravioli with a duck demi glaze and English pea sauce, finished with pea tendril. I could have eaten several of these large raviolis, the pasta cooked just right and filled with plenty of moist, duck meat. There was a touch of sweetness to the filling, likely due to the foie. I savored each bite and was almost sad when it was all gone. The Fontanafredda “Eremo” Barbara Nebbiolo paired with this dish was another very good choice. 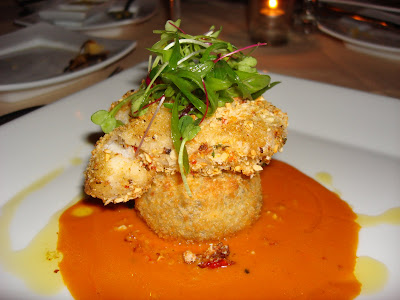 Next up, Snapper, which was pan seared and crusted with almonds, sundried tomato and parsley, served with a wild mushroom cake and finished with shrimp bisque sauce. A moist, tender fish with a light, nutty crust that was well complemented by the rich bisque sauce. The third pairing, the Il Volano, Rosso di Tuscany, worked well too. So far, three for three with the wines. 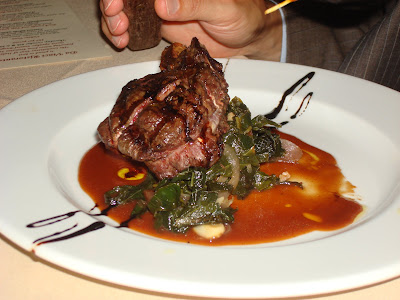 It was then time to be really impressed again. The Grilled Venison Rack with roasted yam potato, sautéed Tuscan kale, and finished with port wine apple juniper berry sauce was exceptional. The venison was meaty, flavorful and lacked any gamy taste. The accompanying sauce enhanced the venison's flavor and I once again relished every single bite, wishing there was more when it was gone. The wine though with this dish was a failure, a Borgo Tesis Cabernet Sauvignon. It just was not a pleasing wine. 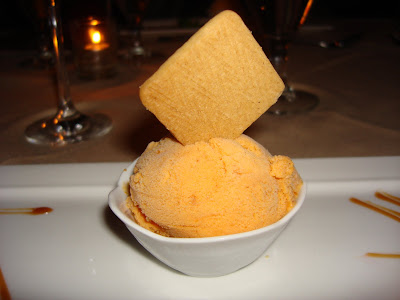 For dessert, we had some Pumpkin Gelato, finished with homemade caramel. This tasted ordinary and was not impressive. There was nothing wrong with it, but it simply did not impress. Chef Pepino makes a number of different flavored gelatos, usually having one special one each month. For example, he recently showcased Lobster Gelato, and I got the chance to try it, as well as one of his new efforts, Foie Gras Gelato. The lobster gelato was exceptional, with actual pieces of lobster in it. The flavors worked very well together, despite what you might think. The foie gras gelato, which was a work in progress, showed potential and Chef Peppino is continuing to fine tune it.

I applaud creative chefs, those willing to take culinary risks. Not every dish they create will work, but they will never know until they test it and see what their customers think. Chef Pepino is such a creative chef and even if the pumpkin gelato was not that exciting, his other efforts certainly were extremely exciting.

Service was excellent, and all of the employees were pleasant, courteous, and helpful. Overall, it was a very good dining experience, with a few exceptional items. I will definitely return here soon for dinner, to try some of Chef Pepino's other dishes. As well as to try his lastest gelato. If you enjoy Italian cuisine, then check out this restaurant.

Thanks for sharing beautiful places to visit in Italy, I will take that in consideration for my next trip. You did incredible job.
what to see in portugal