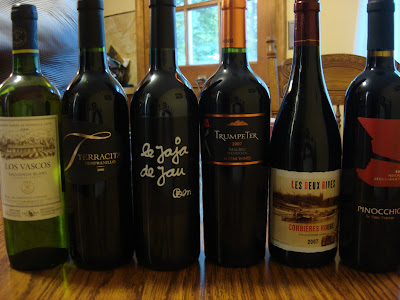 On a recent Thursday evening, when my regular group of wine buddies got together, we tasted six wines I had received as samples from Pasternak Wine Imports. Pasternak is a national importer of wines and spirits from France, Spain, Australia, New Zealand, Argentina, Chile, and California. The company is jointly owned by James Galtieri (President and CEO), and Domaines Barons de Rothschild (Lafite).

The six wines were all inexpensive, costing no more than $12.99, so they had the potential to be value wines. Of these wines, three appealed to almost all of the tasters. Of the other three, two were generally disliked by all and one had a divided opinion.

The most expensive wine of the evening was the 2007 Dievole Pinocchio ($12.99), a wine produced in Sicily and made from 100% Nero d'Avola. It sees no oak and only has an alcohol content of 13%. Unfortunately, it was also a wine that almost everyone disliked. It had an overwhelming candy-like smell, several thinking it smelled like cotton candy. That overly sweet smell carried through in the taste as well, making it seem like liquid candy and just not too appealing.

The 2007 Les Deux Rives Corbieres Rouge ($9.99) was produced in Corbieries, France, and is a blend of 40% Grenache, 30% Syrah, 20% Mourvedre, and 10% Carignan. This wine had a sour, off-putting smell though it did not carry through on the palate. The taste was ok, but nothing special. It was a rather forgettable wine, and not something my buddies would buy if they had a choice.

The 2008 Vina Los Vascos Sauvignon Blanc ($11.49) was produced in the Casablanca Valley, Chile and is made from 100% Sauvignon Blanc. Opinions were divided on this wine, but as several of my buddies really don't like white wines much, I was not surprised by those who did not care for it. This wine sees no oak and has an alcohol content of 13%. It had an intense grapefruit smell with some lemony notes. On the palate, you get both the grapefruit and lemon, as well as some minerality. This crisp wine lacks the grassiness of some other Sauvignon Blancs. I think it was a pleasant wine, and would be a good wine with seafood or light chicken dishes.

The 2007 Chateau De Jau Jaja de Jau Syrah ($8.99) is from the Roussillon region of France, and is made from 100% Syrah. This simple wine pleased most of my buddies. It had a pleasant red fruit and spice nose, and was a smooth, easy drinking wine. Besides the red fruit and light spice flavors, there was a slight herbal taste too. A step above the wines at this price point, I would recommend this wine.

The 2008 Terracita Tempranillo ($8.99) is a Vinos de la Tierra de Castilla from Spain. It was another wine that pleased most of my wine buddies. It had more cherry and raspberry flavors with hints of vanilla. The tannins were very mild, making this an easy-drinking wine and a good value for the price. A nice choice to pair with everything from pizza to burgers.

The 2007 Bodega La Rural Trumpeter Malbec ($11.99) is from Mendoza, Argentina, and is made from 100% Malbec. It undergoes about seven months of oak aging, 20% new American, 20% new French, and 60% second and third use American. This wine was the big winner of the night. It was dark red in color with an intense nose of black fruits and hints of spice. On the palate, there was plenty of concentrated fruit, including ripe plum, blueberry, and black cherry. Tannins were restrained and the finish was long and satisfying. Plenty of character for this price makes this an excellent value wine.
Posted by Richard Auffrey at 6:00 AM