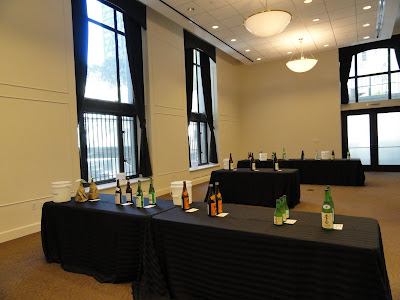 Probably the best way to learn about wine is to taste. No matter how much you read and learn, unless you have actually tasted the wine, there will be a gap in your knowledge. Tasting can solidify and reinforce what you know, provide you a concrete example of what you only theoretically understand. But not all tastings are the same. Some can be far more educational than others, and I would like to see more of those tastings around.

At the Saké Professional Course, we tasted about 90 different Sakés, and they were specifically grouped to provide the maximum amount of information. The Sakés were set up for comparison tastings, which helped you truly understand the differences caused by various brewing practices. Those type of comparison tastings would be extremely useful for wine as well. Let me discuss a bit more about the Saké comparisons I experienced.

We began with a vertical tasting of the various main types and grades of Saké, from Futsu-shu to Daiginjo. That proceeded to a more detailed exploration of the effect of rice polishing. We tasted three Dassai Junmais, similar in all respects except their Seimai Buai, rice polishing rate. The Seimai Buais were 50%, 39% and 23%. That then led to a tasting of mainly Junmai Ginjo, primarily different only in the type of rice used. From those tastings, you understood the effects of these two factors, rice polishing and rice type, far better than what any book could teach you.

The yeast used to brew Saké primarily affects the aroma, but will affect the taste a bit as well. That was shown through a tasting of 9 brews, which varied mainly in the type of yeast used. For example, we tasted three examples of the Nanbu Bijin Daiginjo, varied only by the yeasts: Iwate yeast, Hiroshima Ginjo yeast and Meiri yeast. And there were significant differences.

There were then comparison tastings of Namazake (unpasteurized) vs Pasteurized Saké, including a couple that had gone bad. One of my favorite parts of the tasting was a showcase of Saké brewed in the Yamahai and Kimoto methods. It was then interesting to follow up with a comparison tasting of three Nanbu Bijin Daiginjos, the same except each was produced by a different pressing method: Yabuta, Funeshibori and Shizuku. We moved onto a comparison of Saké aging, including a tasting of three years (2004, 2006 & 2008) of the Nanbu Bijin Tokubetsu Junmai.

A fun tasting was a sampling of more esoteric and different styles of Saké, from Sparkling to Nigori, from Zenkoji to a Honjozo Muroka Nama Genshu. I really found the Zenkoji to be intriguing, a sweeter drink but with complexity and depth of flavor. We moved onto a comparison of glassware, the effect of a traditional porcelin ochoko compared to a more modern wine glass. There were definitely differences. Next, there was a tasting of Saké at various temperatures, showing that gently warming Saké can sometimes be the best. For our final tasting, we tasted Saké from various prefectures of Japan, seeing how regionality can affect taste and style.

Unfortunately, too many local wine tastings are simply a mix of different wines, and do not constitute comparison tastings. The main goal at those tastings is to see if you enjoy the wines or not. It would be more educational to hold comparison tastings, to teach the differences involved in wine making. For example, showcase three Chardonnays, but one without malolactic fermentation, one with partial malolactic and one with full malolactic. Or showcase three wines, with similar blends, except a differing percentage of a specific grape. The tasters will still have the opportunity to determine whether they like the wines or not, but they will also learn something from the tasting.

that is a great idea, that stores should start doing comparison events. I usually go for the safe option of something i know and i am sure i am missing out on some great wines - i am sure the wine companies would support this.

Let us hope then that more wine stores step up and try this.