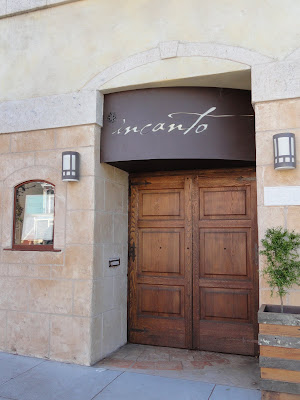 When I was doing some research for my trip to San Francisco, I knew that I wanted to visit Omnivore Books, and had already mapped out a route that ended there. But where to dine afterwards? It made sense to find a restaurant close to the book store, but only if I could find some place good. If I could not find an appropriate place, I would just take a cab elsewhere. Fortunately, I realized that Incanto was just around the corner.

Incanto is owned by Mark Pastore, a New England native, and the Executive Chef is the famed Chris Cosentino, who you may have seen on the Food Network. Chris grew up in Rhode Island and graduated from Johnson & Wales University. He is into snout to tail cooking, and supports local, sustainability movements. This is reflected in Incanto, which serves sustainable produce, meats and seafood, and usually has some dishes with offal on the menu. 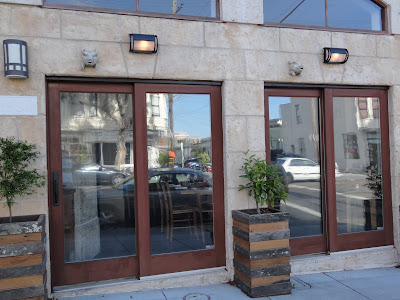 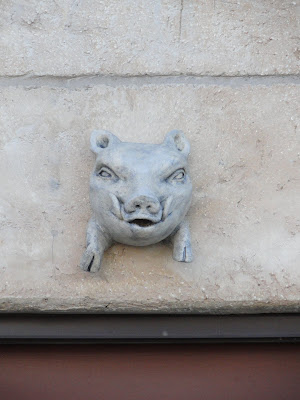 The outside of the restaurant has some cool pig busts above the sliding glass doors. Within the restaurant, you will find the main dining room and an open kitchen, what I consider a sign of a confident restaurant. But rather than seat us in the dining room, we were whisked to a private dining area, their "Dante" room. Though generally not for public dining, the restaurant had decided to open up that room for the evening. We actually had the room completely to ourselves until our dessert course. That certainly made for a more intimate dining experience. 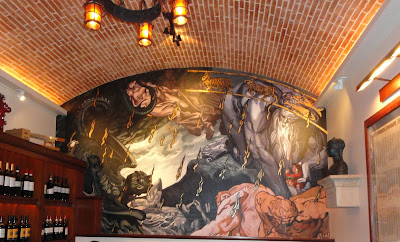 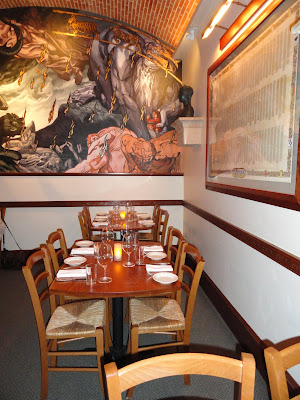 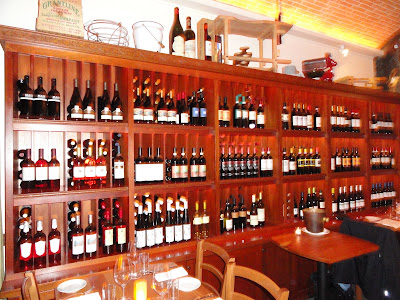 The small room, which seats about 20 people, has been dedicated to Dante Alighieri, the famous Italian poet. It is a beautiful room, with a spectacular mural that was created by the Bay Area muralist Tom Mogensen. On one wall, sandwiched between busts of Dante and his lost love Beatrice, is a complete copy of the text of The Divine Comedy. The other wall displays numerous Italian wines. It is a stunning beautiful room, and am very glad that we got to dine there.

Their diverse wine list is primarily Italian and has about twenty wines available by the glass, half-glass, half-liter or in a flight. Our server seemed well verse in the wine list, and able to provide suggestions. We began our meal by trying a couple of wine flights, one consisting of three Italian rosés ($16) and the other, a Mystery flight ($15), where you don't know what three wines you will receive. Most of the wines were quite good, especially the rosés. We also would later order a 1/2 liter of the 2006 Rosso Conero Lanari ($30), a blend of 90% Montepulciano and 10% Sangiovese. A very pleasant wine with delicious flavors of cherry and plum, and restrained tannins. It paired well with our later dishes.

The food menu changes daily, dependent on what is fresh and available. The menu consists of Starters, Pasta/Rice dishes, Entrees and Sides. Though the dishes are Italian, they do not reflect any specific region of Italy. Instead, they are more creative dishes, sometimes containing less common cuts of meat or offal. There may also be specials for that day, as there were on my visit, but that seemed a bit strange to me. If the menu is changed daily, then why couldn't the specials have just been added? 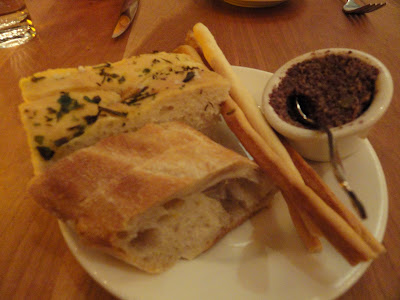 Prior to our first dish arriving, we received a plate of fresh bread and bread sticks with an olive tapenade. The bread, though not warm, was tasty and obviously very fresh. The tapenade was good too, adding a salty tang when smeared on the bread. 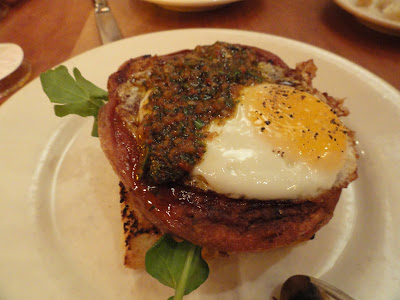 We opted for one of the special Starters, an Open Faced Fried Mortadella ($10) atop toast and covered by an egg and picante sauce. This was exceptional, a meaty, well-spiced mortadella complemented by a mild hot sauce and the runny yolk of the egg. I am usually not a fan of mortadella because I have found too many to be bland, but this was far from that. But that is the significant difference between mass-produced and artisan made salumi. 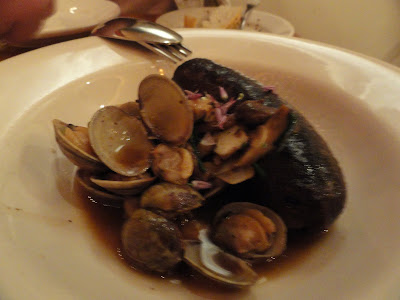 Speaking of salumi, we also very much enjoyed the Boccalone Sanguinaccio ($13) with Manila clams and porcini mushrooms. The plump blood sausage was very tender, with an earthy taste blended with mild spice flavors. The clams were also tender and taste, the porcinis complementing the earthiness of the sausage. Another great choice for a starter. 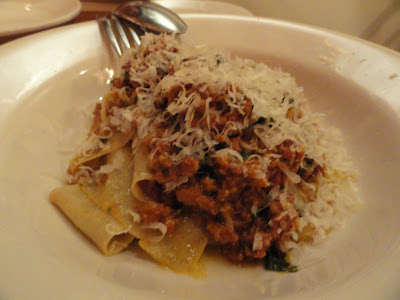 The pasta/rice dishes are available in both small ($9-$10) and large portions ($15-$16). We decided to order a couple small plates of pasta and above is the Handkerchief Pasta & Rustic Pork Ragù, with plenty of shaved cheese atop it. The meaty ragu was very tasty, spiced well, and with a rich, savory nature. The pasta was cooked perfectly, with just the right amount of firmness. I really enjoyed this hearty dish and would highly recommend it. 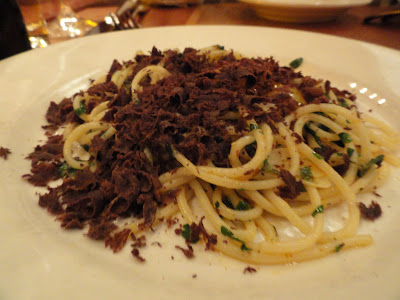 The Spaghettini with Sardinian cured tuna heart, egg yolk & parsley was not quite what I expected. I never would have realized that the shaved meat atop the pasta was tuna heart. Once I broke the egg yolk, and mixed it in with everything, this was such an intriguing dish, with a more savory, earthy flavor. Once again, the pasta was cooked just right and I eagerly devoured this dish. You would never have guessed you were eating tuna heart, thinking instead it was some type of beef. 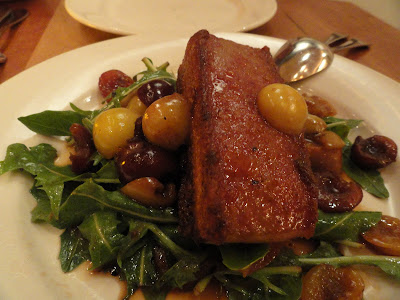 We chose to split an entree after everything else we had eaten, the Pork belly, cherries, dandelion greens & pickled peaches ($24). I really love pork belly and this dish satisfied my deepest desires, with an excellent combination of crispness and silky, smooth fat. Perfectly prepared, the pork was ehanced by the fruit and it was clear to me pig was king at this restaurant.

Service was excellent, our server being personable, knowledgeable and attentive. The food was delicious and compelling, and I was certainly impressed with all of it. I think the prices were actually fairly good, considering the quality and quantity of food we received. For example, at other similar Italian restaurants, their small pasta dishes may often cost $15 or so. Thus, this restaurant deserves my highest recommendation.

And before I left the restaurant, I had to buy one of the Boccalone t-shirts, which says "Tasty Salted Pig Parts." That garnered plenty of positive comments when I later wore it.

This place in on our must-visit list for our trip to SF later this year. Thanks for the preview!

Hi Mary:
I am sure you will love the food there. Plus, it is located very close to Omnivore Books, the culinary bookstore.

Hi Anonymous:
What do you mean by "safe?" I think it is ok to drink wine every evening, just in moderation. If you are driving, obviously you must be very careful how much win you drink in an evening. Plus, much depends on whether you are eating while you are drinking. Splitting a bottle between two people at dinner is likely very safe.

Why-oh-why must I live so far from this place?! They've already got me with the snout-to-tail menu, but cured tuna heart? I've never even heard of that - I didn't know any fish offal was consumed beyond roe and liver. Cool shirt too.