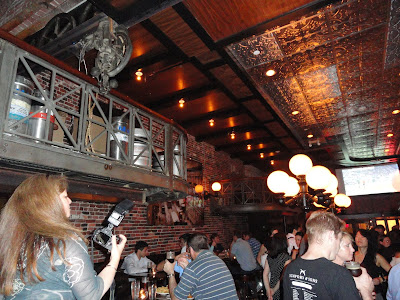 Back in January, I first visited Stoddard's Fine Food & Ale, to attend a pre-opening cocktail party. It was a visually compelling restaurant and bar, with a fascinating architecture and decor, especially to a history buff like me. Though the restaurant was not fully completed, you still could perceive the totality of the image the owners were trying to present.

But due to multiple delays, months passed before the restaurant finally opened. And their "private club" still has not opened, though I was told it would open in September. I was recently invited to check out the restaurant, now that it has been open for a time. I was accompanied by Jackie, the Leather District Gourmet, and we were very curious what we would discover at Stoddard's.

The restaurant building was built around 1848, in a Greek Revival Style. "It’s been a corset store, sewing machine retailer, bait and tackle shop, and cutlery." The history is reflected in nearly every aspect of the restaurant, making this a fascinating stop for tourists or anyone interested in Boston history. On a Wednesday evening, the restaurant was quite busy, and there were almost no empty tables. I did not expect them to be so busy on a Wednesday, but obviously the restaurant has become quite popular. 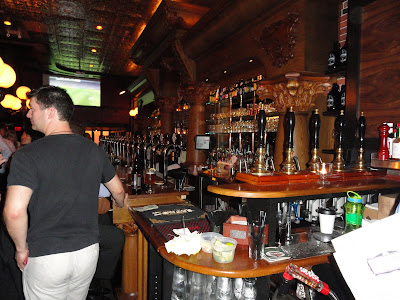 Some might refer to Stoddard's as a gastropub, a term which can be vague but commonly refers to a bar with high quality food, a cut above the average pub fare. That definition is appropriate, as their cuisine is very good, and often better than what is usually found in bars and pubs. To elevate their cuisine, the owners chose Executive Chef Mark Cina to run their kitchen, and I believe they made a very good choice. Chef Cina has worked at places including Rendezvous, Craigie Street Bistrot, and Ivy.

Though before considering the food, I should begin with the beverages. First, they have a huge beer list, including about five cask ales. As I am not a beer aficianado, the list does not appeal to me but I certainly respect its diversity. For a beer lover, there is much to appreciate. Second, they have a full bar and have created a list of special cocktails, essentially using very old recipes. I tried their House Punch, which is made with bourbon, port and orange juice, and found it quite tasty. It was not overly sweet, having a bit more tartness, and with nice fruity flavors. The Moscow Mule, made from vodka, lime and ginger beer, was refreshing and delicious, with a prominent ginger taste. An excellent drink for a hot summer day.

Back to the food. The restaurant has a "by scratch" kitchen, meaning that nearly everything is made in-house. That definitely appeals to me, knowing that the food is prepared fresh and it not previously frozen or processed. The Menu consists of Hors D'Oeuvres, Appetizers (most $8-$11), Entrees (most $13-$25), and Side Dishes. Dishes are reasonably priced, considering the quality and quantity of food. 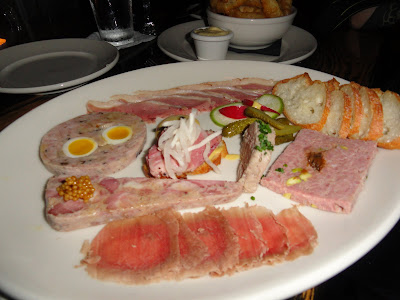 An excellent start to your dinner would be the Charcuterie Plate (Market price), which has eight different types of meats including pate de campagne with pistachios, bresaola, sausage with eggs, duck prosciutto and more. I found the various meats to be quite flavorful, spiced properly, and texturally alluring. This charcuterie plate certainly shows much skill and was a very promising way to begin our meal. My only criticism is that the bread slices were a bit soft, and I would have preferred a crunchier, stiffer bread or crackers. 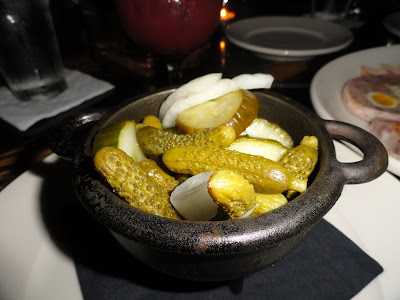 The Pot of Pickles ($4) has plenty of home-made gherkins and bread & butter chips. Though the gherkins were ok, nothing special, I really enjoyed the bread & butter pickles. They had a nice crispness with a mild sweetness. 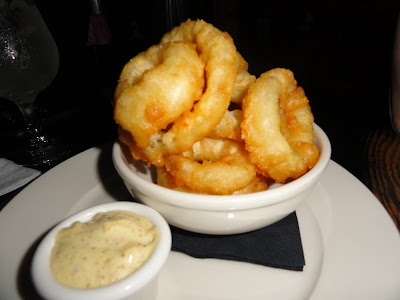 Their Onion Rings ($6) brought up memories of my childhood days visiting the amusement park at Salisbury Beach. I used to get a box of onion rings like these, large, thick battered and sweet. Such a pleasant memory and these onion rings were clean, fresh, and delicious. 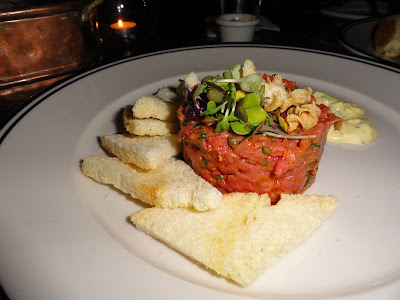 For the carnivore in you, try the Beef Tartare ($10), with elephant garlic chips, sauce gribiche, and toasted brioche. These brioche are what I would have preferred for the charcuterie plate. The tartare, chopped to order, was smooth, flavorful and meaty with an intriguing, mild citrus taste. I liked the addition of the garlic chips too, which only had a mild garlic flavor. A recommended dish. 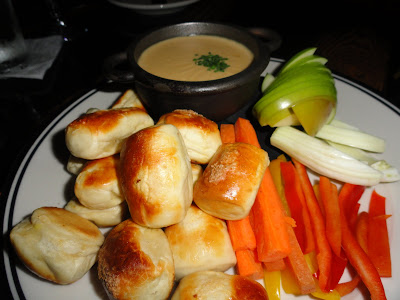 Another good appetizer was the Aged Gouda and Cask Ale Fondue ($10) with house made pretzel bites and crudite, including green apple slices. Using two types of gouda, the gouda flavor was most prominent with the ale taste only a background taste. Who doesn't enjoy cheese fondue? The pretzel bites were good with the cheese, as were the green apple slices, which I have long found a perfect accompaniement to fondue. 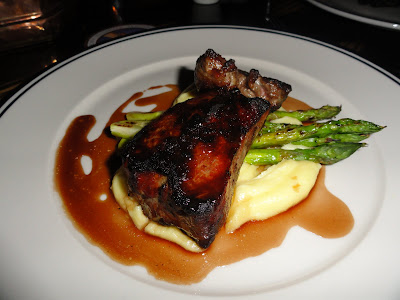 The Meyer Ranch All Natural Beef Rib Eye (market price) is a seared and fat poached cap, roasted glazed eye, potato puree and asparagus. Though a tasty and well-prepared steak, it just didn't seem anything special. You won't go wrong with this dish, but if you are seeking something exciting, this is not the choice. 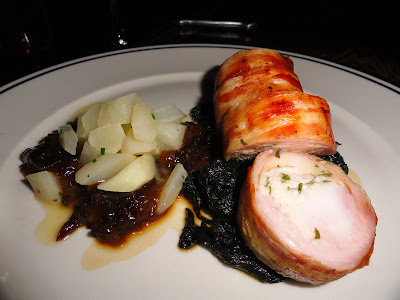 For something exciting, definitely order the Ballotine of Vermont Rabbit ($24), a boneless rabbit stuffed with rabbit mousse and wrapped in house pancetta , served with glazed salsify and stewed prunes. Rabbit is an underappreciated meat, one which I very much enjoy. It actually can be a very sustainable meat too. This dish was superb, with a delightful combination of harmonious textures and flavors. You would not even realize you were eating rabbit if you just tried the dish. The tender and flavorful meat was compelling, and highly recommended.

For dessert, we tried the Chocolate Terrine with a fresh blueberry compote and homemade whipped cream. This was a very rich, dense chocolate dish which was almost like fudge.

Overall, I was impressed with Stoddard's. The food was often very good, flavorful and reasonably priced. The restaurant is a place to get a good drink or a beer, as well as to enjoy some quality cuisine. It exceeded my expectations and I recommend that you stop by for dinner and drinks.

Posted by Richard Auffrey at 2:00 PM