Iluna Basque: A Taste of Spain 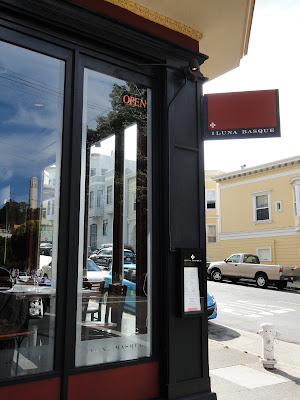 We were seeking something a bit different for dinner in San Francisco and were intrigued by Iluna Basque (which means "Basque night"), a restaurant in the North Beach area which serves traditional and festive Basque cuisine. I made reservations and we later took a short cab ride there, and I am very glad that we took a chance on this place.

Chef Mattin Noblia is a native of the Basque country and has been enthralled with cooking since a very young age. At 14 years old, he entered a three-year culinary training program, and after completion, he worked in restaurants in France and Switzerland. In 2002, Mattin came to San Francisco and opened Iluna Basque a year later.

The restaurant is located near Washington Square and has plenty of competition from all of the other restaurants in this area. That it is still around after seven years is some indication that they are succeeding. Plus, the quality of the food is another important indicator of why they are still around. 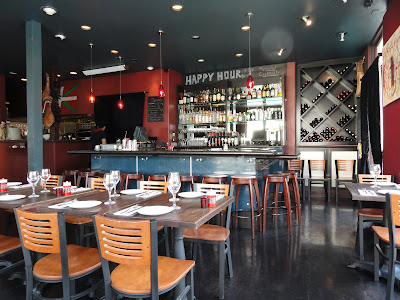 The restaurant is small but intimate, with a small bar area that can accomodate about six people. They carry a fully stocked bar, with a list of intriguing cocktails, such as the Basque Martini, and a good wine list with numerous wines from the Basque region, on both the Spanish and French sides. They even make their own Red Sangria, which was pretty tasty. From Monday to Friday, from 5:30pm-7pm, they have special Happy Hour drink prices.

The food menu primarily consists of tapas ($3.75-$9.75) and a handful of entrees. Some of the tapas are more traditional while others are more creative. There are plenty of interesting choices and we chose to just dine on tapas, to sample a variety of dishes. 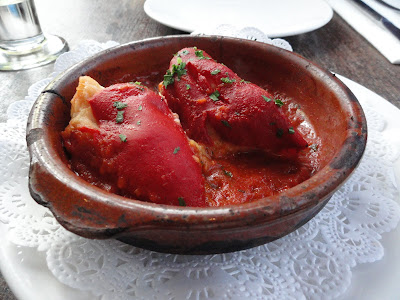 We began with the Piquillos Pepper Stuffed with Spanish Salt Cod Bacalao ($5.75), a delightful start to our meal. There was plenty of salt cod within the peppers, and all of the flavors blended well together. There was an interesting mix of saltiness with a slight spicy taste. 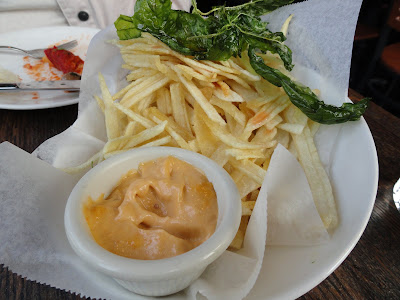 The Crisp Shaved Potatoes with Herbs & Vinegar ($5.75) were thin, crispy French fries. They had a nice clean taste and made for an interesting side dish. 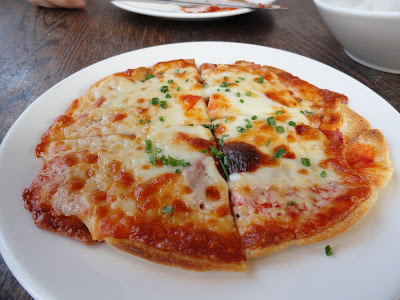 I was not expecting to find pizza here, but it turned out to be a very pleasant surprise. The Petite Basque Pizza ($8.75) has Spanish ham and a Basque cheese. The thin-crusted pizza was quite delicious, with a rather unique taste which I attribute to the cheese. The slightly salty ham was meaty, with thin ribbons of silky fat. 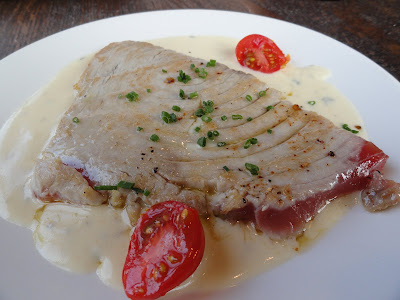 The Seared Tuna with Bleu Des Basque Sauce ($8.75) was a good-sized piece of fish, lightly seared on the outside. The blue cheese sauce was tasty and tangy, an interesting combination with the tuna which did work well. I think I will experiment more at home combining blue cheese with tuna. 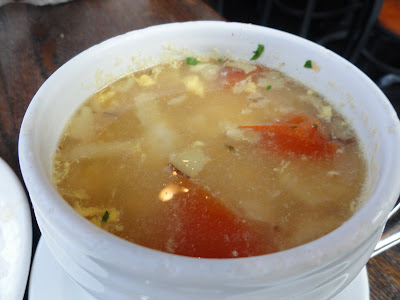 The Garlic Soup with egg ($5.75) was good , and made in a more traditional style which adds an egg. I prefer my garlic soup without an egg but it still tasted good. There was lots of garlic slices in the soup, which I did extract to put on some bread.

We also had the Mini Lamb Burgers ($3.75), basically sliders, and they had a strong lamb flavor which I enjoyed. Plenty of meat for a little burger and the bun was soft and fresh. 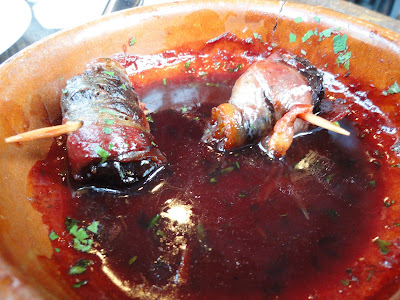 We finished up with Plums Wrapped in Bacon ($5.75), as who can refuse bacon? These were fantastic, with a nice crispy bacon surrounding the sweet and juicy plums, and all covered with a sweet sauce.

Service was excellent and we had a very nice dinner. This would probably be a great place to drink and dine on tapas. The food is reasonably priced and there is plenty of variety. If you are thinking about someplace different to eat, consider this restaurant.

Your post reminded me I really need to get to Iluna Basque. I'm a huge piquillo pepper fan from my Miami days.

It was so nice to finally meet you at WBC. I’m sorry that we didn’t get a chance to talk more. The video diaries and documentary footage kept us very busy.

I hope you enjoyed the conference and hope to see you during your next sake trip to San Francisco.