All Star Sandwich Bar: A Revisit 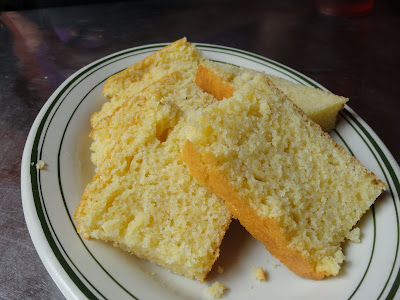 The warm cornbread thoroughly impressed me and I would visit again just for that. The proper moistness, just a touch of sweetness, and a wonderful corn flavor. I love cornbread, yet it seems so difficult to find good cornbread. Far too often it is heavy, dry and crumbly. But this was superb and I almost want to keep it a secret so there will be more for me.

Last week, I and several other local food writers and bloggers were invited to a lunch Sand-Tweet at All Star Sandwich Bar in Cambridge. I was joined by some good people, including Jackie of Leather District Gourmet, Rachel of Fork It Over, Pam of Cave Cibum, Christine of Citysearch Boston and Dave of Thrillist Boston.

It had been quite a long time since I had eaten at All Star, way back in 2006, and relatively soon after they had opened. The restaurant had initially garnered a lot of buzz but that died down, especially after the restaurant made some significant changes. I was not impressed with their sandwiches, which seemed to be average in quality and over-priced for what you received. So I did not return.

But about two years ago, ownership of the restaurant changed, and two brothers, Kosta and Johnny Diamantopoulos took over. Though they maintained the basic concept of the restaurant, they made some changes as well. For example, the menu is much larger than my last visit. There are actually two menus, one for the regular items that are always available, and a sheet of specials, which are available for a limited time. The specials menu usually has around 8 different sandwiches and some sides. There is certainly plenty of variety available and everyone can find a sandwich that appeals to them, from vegetarians to carnivores.

But what about pricing? I don't recall all of the prices from the prior menu, but I do know that the price of the Beef on Weck used to be $9.25 and now is $8.95, a slight decrease. The average cost of a sandwich is $8.95, and you get some cole slaw and a pickle. Burgers range from $10-$12.50, but in addition to the slaw and pickle you also get French fries. This is not a cheap place to eat, but the size and quality of the sandwiches has definitely improved under the new ownership and gives a better value now.

For beverages, they have a variety of non-alcoholic drinks as well as beer, wine and sangria. To my liking, they carry fresh brewed, unsweetened iced tea. I also tried their sangria which was very pleasant and fruity. The alcohol flavor was very subdued and it was rather refreshing, making for a very good summer drink. 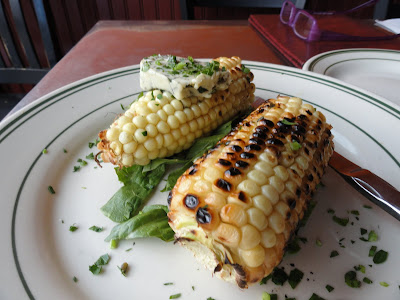 I began with the Grilled Sweet Corn with Basil Butter, one of the special sides. This was a decent side, and I really liked the taste of the basil butter when it melted over the corn. 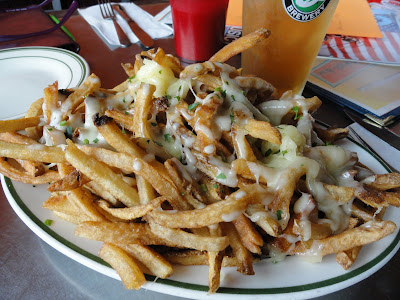 The hand-cut Cheese Fries ($4.95) were a mound of crisp fries, with plenty of melted cheese. A good value side, the fries have a fresh, clean taste with lots of potato flavor. If they added some bacon atop the fries, I would have been in heaven. It is a large enough dish that 2-3 people could easily share it. 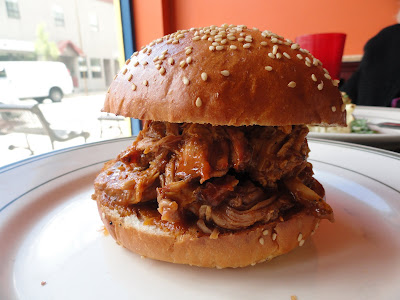 I ordered the BBQ Smoked Pulled Pork ($8.95), which normally comes topped with creamy coleslaw but which I had them omit. It is good that they are flexible enough to omit certain ingredients if you do desire. As you can see, there is a good amount of meat in the sandwich, better than the size of the sandwiches before. As for its taste, it was quite good, with plenty of tender pork with a slightly tangy BBQ sauce. The roll was fresh and I finished the entire sandwich, enjoying each bite. My dining companions enjoyed their sandwiches as well, all of which seemed to have plenty of meat in them, even the Weck.

All Star has certainly improved over the past and I will return to check out more of their menu, as well as for more cornbread. I still feel they are slightly pricey, but you now receive a larger and better sandwich. I don't think I would be as concerned about the prices if they only included some french fries with your sandwich, like they do with their burgers. They are doing a lot good here, and they could do even better with such a slight change. I'll report back again after I have eaten here a couple times more.