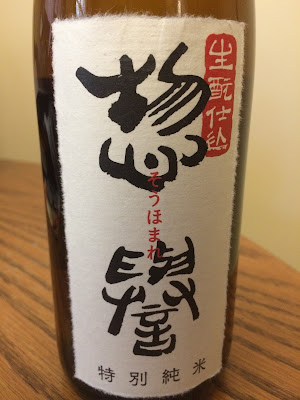 For World Sake Day, on October 1, I chose to open a new bottle to me, the Sohomare Tokubetsu Kimoto "Heart and Soul" Junmai Sake ($29.99), which I previously purchased at Astor Wine & Spirits. It turned out to be an excellent choice, a perfect way to celebrate the holiday.

The Sohomare Brewery is a small, family-owned Sake kura which was founded by the Jono family in 1872 in the Tochigi Prefecture. Tochigi is located in the northern Kanto region and is surrounded by a continuous mountain range to the east, north and west. The brewery is well known for its use of the highest quality Yamadanishiki rice as well as its use of the traditional Kimoto method of production. This Sake isn't an exception.

The Sohomare Tokubetsu Kimoto Junmai is made from the the highest quality Designation A Yamadanishiki rice, harvested from the Yokawa and Tojo regions of Hyogo Prefecture. The rice has been polished down to 60%, which would normally qualify it as a Ginjo but they do not label this Sake as such. It is a Tokubetsu though, which means it is special in some way, and its higher polishing rate is likely the reason for that designation.

It is also brewed using the Kimoto method, which entails creating a yeast starter in a waist-high tank and then mixing it with large oar-like poles, a lengthy and laborious process. Natural lactic acid will fall into the tank, though more modern methods simply add commercially created lactic acid. Using natural lactic acid takes longer and it is riskier. The brewery states it takes about 15-18 days longer for them to create Sake with the Kimoto method. Kimoto Sake can be more rich and complex, and sometimes also has a gamier/earthy taste. 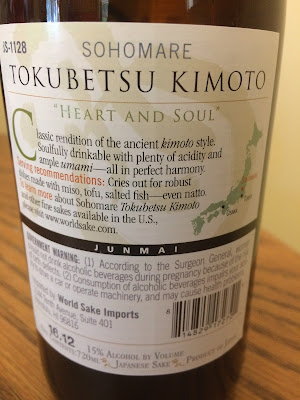 As it is a Kimoto, its acidity is also high, at 1.8, and its Sake Meter Value is +5, meaning it tends to be a bit dry. As a Junmai, it is made from only four ingredients, including rice, water, yeast and koji-kin. This was a compelling Sake, a mellow and smooth-drinking Sake with lots of acidity and delicious umami. It has a richness to the mouthfeel, a lengthy and satisfying finish, and is something I could sit and drink all day. There is a mild earthiness to the Sake which enhances the totality. A well-made and delicious Sake, it gets my highest recommendation, especially considering its very reasonable price point.

This would be an excellent pairing with umami dishes, especially mushroom or truffle-based ones, and would also go well with various meats. I enjoyed the Sake with a couple pulled pork sandwiches, the slightly spicy sauce working well with the Sake. This would also work well with oysters and fried clams. Kanpai!
Posted by Richard Auffrey at 3:00 AM