From 1865 Selected Vineyards: A Killer Chilean Pinot Noir For Under $20 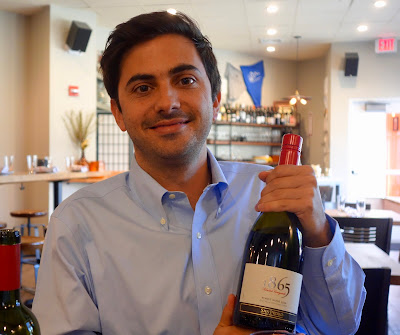 It's difficult to find a compelling Pinot Noir for under $20. Most under that price point are too simple, wines without character. They may be drinkable but they won't bring a smile to your face or a twinkle to your eye. However, when you find a sub-$20 Pinot Noir of complexity and elegance, a wine that tasted blind would make you think of a $30-$40 wine, then you've struck vinous gold.

I had the pleasure of meeting Matias Cruzat (pictured above), the winemaker for the 1865 label of Viña San Pedro in Chile, for a private tasting of several of his wines. Viña San Pedro is the second largest winery in Chile, having been founded in 1865 in the Curicó Valley by the Correa Albano brothers. The winery has a number of different labels, and in 1997, they created the 1865 label, a nod to the date of their founding. The concept behind that label is to produce single-varietal wines from different terroirs, those which best represent the grapes.

Currently, they produce seven wines under the 1865 Selected Vineyards label, including Sauvignon Blanc, Chardonnay, Pinot Noir, Malbec, Syrah, Carmenere, and Cabernet Sauvignon. There are also two higher end categories under this label, including 1865 Special Editions and 1865 Limited Edition. The production of the 1875 wines often include use of concrete eggs (especially for the Chardonnay, Pinot Noir, and Sauvignon Blanc) and foudres (large wooden casks of French oak, from 1000 to 5000 liters).

Matias has been working for the winery for 4.5 years, and has prior experience working at wineries in California and South Africa. He was born in the U.S., to Chilean parents, as his father studied for his MBA in the U.S. and also worked for Proctor & Gamble in Cincinnati, Ohio. Overall, Matias is personable and engaging, upfront and intelligent. He is also a passionate advocate for his 1865 wines, as well as the wines of Chile.

The 1865 wines I tasted all cost under $20 retail, typically $17.99 at your local wine store, and are imported by United Liquors. At this price point, they are excellent values. Matias stated that as the cost of land and grapes are much lower in Chile, they are able to offer much better prices on their wines than you might find from other regions, such as California and Oregon. 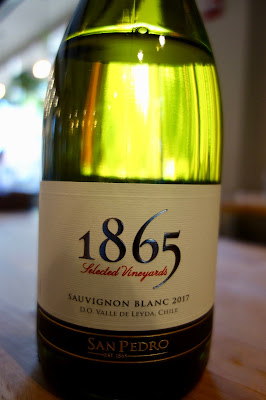 The 2017 1865 Selected Vineyards Sauvignon Blanc is a 100% Sauvignon Blanc from the Santo Domingo vineyard in the Leyda Valley. The vineyard is only about 3.5 kilometers from the coast, one of the closest to the ocean. The vineyard also has primarily granitic soils and many fossilized shells have been found in the soil. The closeness to the ocean allows the grapes to ripen more slowly, leading to more aromatic wines with a strong mineral component. Only about 5000 cases of this wine were produced.

Fermentation takes about a month and about 20% of the grapes spent time in neutral French oak foudres, giving contact with the lees. The 2007 vintage was tough, a warmer vintage. The wine has a pale yellow color with the aroma of citrus and a touch of green pepper, the typical green of Leyda Valley. On the palate, Matias notes that the wine is unlike "New World explosive Sauvignon Blanc."  I found the palate to be complex, with intriguing citrus, including a touch of grapefruit, and mineral notes, a crisp acidity and a touch of green pepper. An interesting white wine with plenty of character at this price point. 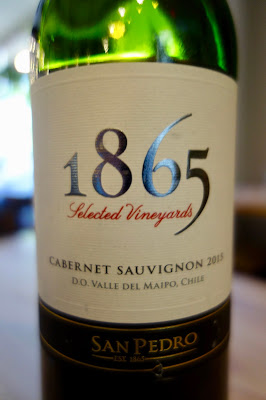 The 1865 2015 Selected Vineyards Cabernet Sauvignon is 100% Cabernet Sauvignon from the Las Piedras vineyard of the Valle Del Maipo. The Cabernet spent about 12 months in 95% French and 5% American oak, with 50% first use and 50% second use barrels. About 50,000 cases of this wine were produced, so you should be able to find this readily available.

The Cabernet possesses a dark red color with a fruity aroma with hints of spice and a touch of chocolate. On the palate, it is soft and elegant, with low tannins, and a delightful melange of cherry, plum, and blackberry with subtle spice notes and a lengthy finish. Matias mentioned that the Maipo Valley is well known for the soft tannins in its grapes, one of the most important aspects of that area. With its softer tannins, this Cabernet doesn't need a steak to tame its tannins, and can also pair well with everything from a burger to a Bolognese. It might also work with a rich fish like Salmon or Tuna. This is a Cabernet with plenty of character and complexity at this price point, making it a very good value. 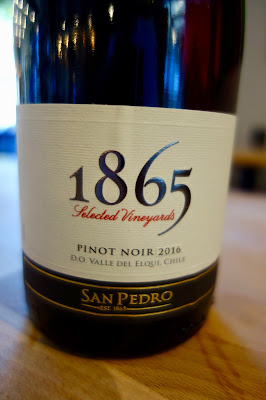 And to me, the clear winner of the tasting was the 2016 1865 Pinot Noir. Matias mentioned that he is obsessed with Pinot Noir and it's clear that he has created a stunning example in this wine. He noted that though some Pinot Noir had been planted in Chile many years ago, it is only within the last 10-20 years that anyone has become serious about it. The grapes for this wine come from the El Platero Vineyard in the Valle Del Elqui. About ten years ago, they planted their first vineyards in Elqui, starting with Sauvignon Blanc and then later planting Pinot Noir and Chardonnay. The vineyard is about 20 kilometers from the ocean and the region is both coastal and Andes, a cool climate region that once grew grapes primarily for producing Pisco.

The wine was aged for about eight months in a combination of foudres, concrete eggs and barrels. It has a 13.5% ABV, as Matias stated he didn't want to make a high-alcohol Pinot Noir. Matias also stated that this wine was produced in the same fashion as he would produce a high-end Pinot Noir. As only 1500 cases of this wine were made, it won't be around too long and could be more difficult to find, but I highly recommend you seek it out.

This Pinot Noir has a light red color, and an alluring and complex nose of red fruits and touches of earth and spice. Those aromas will draw you in and you won't be disappointed once you taste it. The wine is elegant and light bodied, with a complex and fascinating melange of flavors, including bright red cherry, more subdued black cherry, subtle spice notes, and underlying hints of earthiness. There was excellent acidity, mineral notes, and a lingering, satisfying finish. It was well-balanced and compelling, reminding me in different ways to Burgundian Pinot as well as Oregonian Pinot, yet still with its own unique character.

I could not rave enough about this wine. I tasted it without knowing the price and would have thought it easily cost $30-$40, and been worth that price. When I learned it cost less than $20, I was stunned. Initially, I was told it was less than $15, but later research indicated that was the wholesale price and it retails about $17.99. At that price, it is still a killer value and it receives my highest recommendation. I'm planning on stocking up on this wine and encourage all wine lovers to do the same.

Kudos to Matias for producing such delicious and compelling wines at a great price point.
Posted by Richard Auffrey at 3:00 AM