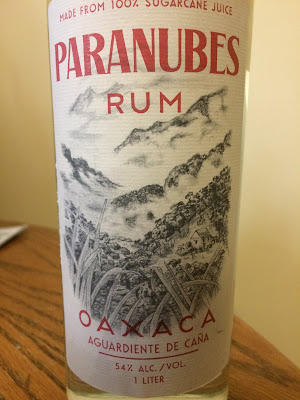 Rum doesn't receive sufficient appreciation as a spirit, most often ending up in a cocktail rather than enjoyed neat. It isn't as revered as Scotch or as popular as Vodka. It isn't considered as intriguing as Mezcal or as compelling as Bourbon. However, rum possesses a fascinating history, is produced all over the world, and there is plenty of diversity in rum types and styles. Rum deserves far more attention and maybe the new Paranubes Rum can help in that regard.

Let's begin our exploration of rum by journeying back in time about 500 years...

By 1500, Madeira, a Portugeuse archipelago, had become the largest exporter of sugar in the world. Some years earlier, when Christopher Columbus was young, he received training in the Madeira sugar trade and that experience would later provide inspiration when he journeyed to the Caribbean. During his first journey, as he pondered ways to make money in these new lands, Columbus realized that the Caribbean islands would be an excellent spot to grow sugar cane. Thus, on his second voyage, in 1493, he allegedly brought sugarcane with him to plant in the Caribbean. There is some question whether that sugarcane died on route and if later explorers were actually the first to plant sugar cane in the Caribbean.

Whatever the truth, sugar cane soon became a common and popular crop throughout the Caribbean and also quickly spread to the continent, from Brazil to Mexico. During the first-half of the 16th century, the Spanish planted sugar cane in Mexico, and large plantations soon arose across the country. It didn't take long for people to start using sugar cane to produce alcohol and with the advent of distillation, the indigenous people eventually created their own version of sugar cane rum.

This sugar cane rum, commonly known as aguardiente de caña, is mentioned at least as far back as 1631, in an official government prohibition. This indicates that sugar cane rum had existed for a number of years prior to the prohibition, though it might not have been documented until 1631. It would be around 1714 that this rum would also become known as chinguirito.

During much of the 17th and 18th centuries, the production of chinguirito was illegal, primarily to prevent it from being competition for Spanish brandies and wines. However, government officials noted that it was extremely difficult to enforce the law as illegal distillation equipment was simple to create and hard for officials to locate. Finally, in 1796, Spanish officials relented and made the production of aguardiente de caña legal.

Note that a hectoliter is equivalent to one hundred liters. So, the production of aguardiente de caña was roughly equivalent to 108 Million 750ml bottles. As we can see, about twice as much aguardiente de caña was produced as compared to mescal and tequila, but the value of mezcal and tequila for a hectoliter was twice as much. The report also stated that "... the people of Mexico consumed 50 liters of alcoholic stimulants per capita in the year 1897, and spent per person $1.30 for their drink." It is clear that Mexico has a lengthy history of rum yet you hear very little about it. That needs to change. 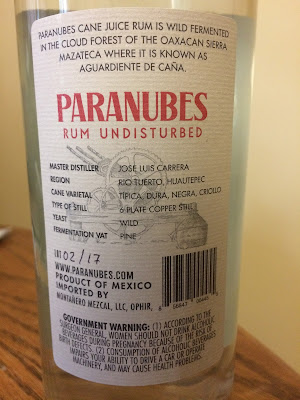 Paranubes Rum, produced in Oaxaca, is similar to Rhum Agricole as it is made from sugar cane juice. Within the state of Oaxaca, the Paranubes is more specifically made in the region of the Sierra Mazateca Mountains, inhabited by the indigenous Mazatec (roughly translated as "people of the deer") people. The Mazatec are best known for their use of "magic" mushrooms, psilocybin mushrooms which create psychedelic effects, in a variety of rituals, for healing, and more. People in this region have also been producing aguardiente de caña for centuries.

Jose Luis, who creates Paranubes Rum, is aware that his father and grandfather produced aguardiente de caña, and it is possible additional ancestors may have done so as well. Jose grows four different types of sugar cane, though his rum is primarily made from Caña Criolla, a reddish African sugar cane which is common in the West Indies, with the addition of a small blend of the other types. Once harvested, the sugar cane is brought to the distillery, known as a trapiche, where it is crushed and the pulp is removed, leaving pure cane juice.

You should check out the Paranubes website for more detailed information on the fascinating distillation process, and you'll understand the uniqueness of what Jose does, as well as how much work is involved in the process. For more background on Jose, and how he came to the attention of Judah Kuper of Mezcal Vago, you should also read the intriguing article in Imbibe Magazine.

I've been attempting to locate the official Mexican regulations as to the production of rum and so far have only been able to find an alleged abridged translation. This page claims that Mexican rum "... should undergo a maturation process in oak barrels" and it must be matured for at least eight months.  If that is the case, then the Paranubes Rum would not qualify as a rum in Mexico as it was not matured in oak. However, I suspect the regulations may be different than what I've found and I will update this post once I locate more information.

(Update as of 10/19/2017): I'm providing an update to the above paragraph after receiving additional information from Judah Kuper of Mezcal Vago as well as some additional online research. First, Paranubes Rum is in accordance with the current Mexican regulations, as delineated in Oficial Mexicana NOM-142-SSA1/SCFI-2014. Second, the abridged translation I previously provided is part of PROY-NOM-199-SCFI-2015, which is a controversial proposal which has not yet become law in Mexico. Thus, there is currently no official Mexican regulation that Rum must be aged for six months. NOM-199 is controversial for many reasons, including how it attempts to regulate agave spirits, hurting small producers in favor of large corporate interests. There has been much opposition to NOM-199 and it is insure whether it will ever become law or not.

The Paranubes Rum ($49.99) is not yet available in Massachusetts, but on my recent visit to Chicago, I was able to find some at a wine & spirits shop. It safely survived the trip in my checked luggage and I recently opened a bottle to sample it. Its aroma is very funky and prominent, with a saline character that reminds me of the smell of the ocean or an olive tapenade. It's not a smell you would usually associate with the mountains of Oaxaca and I don't recall another rum with a similar aroma.

The aroma doesn't follow through much on the palate, which instead brings a mild sweetness, a touch of grassiness, and some citrus and tropical fruit flavors. It is more light and elegant, with a lengthy and pleasing finish. Though it is has a 54% ABV, you wouldn't know it from its well balanced taste. It definitely reminds me of a Rhum Agricole, and its distinctive and unique aroma and taste certainly sets it apart and you probably wouldn't confuse it with any other rum. To me, that speaks of the terroir of the Paranubes, that sense of place which gives the rum its uniqueness. The Paranubes can be consumed on its own though it also would work well in a variety of cocktails.

I hope more Oaxacan rums come onto the market so that we can experience more of the terroir of this region. Paranubes Rum is exciting and different, delicious and compelling and you need to seek it out. Judah Kuper of Mezcal Vago already sells some incredible Mezcals and with this diversification, he continues in that vein with an incredible Oaxacan rum.
Posted by Richard Auffrey at 3:00 AM