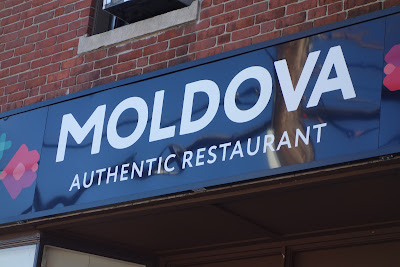 As I wrote yesterday, I was recently invited by Andrei Birsan, the owner of Vins Distributors, a wholesaler of Moldovan wines, as a media guest to taste some of his portfolio, as well as to experience Moldovan cuisine at the Moldova Restaurant in Newton. At the dinner, we were joined by Artur Andronic, who owns the restaurant with his wife Sandra.

Artur and Sandra are natives of Moldovas and they initially opened an Italian restaurant in Newton but quickly realized it just wasn't for them. They decided instead to open a Moldovan restaurant, celebrating their heritage, which would also be the only such restaurant in Massachusetts. Hiring a Moldovan chef, they also received much input from their families about the cuisine and recipes, and finally opened in April 2016. It turned out to be an excellent decision as this is a restaurant you need to experience, to enjoy Moldovan cuisine and the warm hospitality of Artur and Sandra. 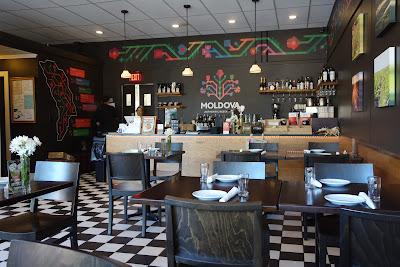 Moldovan cuisine consists of numerous traditional European foods, from beef to pork, potatoes to cabbage. It also draws influences from Romania, Greece, Poland, Ukraine, and Russian, as well as the former Ottoman Empire. Thus, many of the dishes will look familiar to the average person, though the names may look inscrutable.

The restaurant is open for both lunch and dinner, and is a relatively small, but comfortable spot. The bright colors and designs on the walls are aesthetically pleasing, and include a map to give you a better idea of the geography of Moldova. Artur was a gracious host, personable and knowledgeable, and it was a pleasure to dine with him and learn more about Moldovan cuisine. Though I've previously enjoyed Moldovan wines, I'd never before had their cuisine so this was a welcome experience. 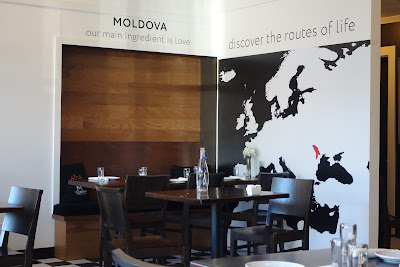 I've already mentioned the wine list at Moldova Restaurant, but I'll also note they have a full bar, serving various cocktails, and a small beer list. In the future, they hope to add some Moldovan beers to that list. You'll also find some non-alcoholic choices including Compot, a home-made, traditional Eastern European fruit punch. Next time I dine here, I'll have to try the Compot.

The Dinner Menu has a compact range of diverse choices, including: Appetizers (5 choices, $7.95-$11.45), such as CLĂTITE CU GĂINĂ ȘI CIUPERCI (Chicken and mushrooms crepes) and FASOLIȚĂ (Bean paste with caramelized onions); Soup & Salad ($6.45-$8.95), such as ZEAMĂ (Heart warming chicken soup with homemade noodles) and SALATĂ DE VARZĂ (Fresh cabbage salad with scallions, parsley and olive oil); Placinte La Tiger (5 choices, $7.95-$8.95), a traditional pan-fried pie with various fillings); Entrees (3 choices $16.45-$17.95), such as FRIPTURĂ DE GĂINĂ (Roasted chicken, stewed in broth with onions and garlic, served with pickled vegetables and traditional polenta with feta cheese and sour cream on the side); and Chef's Specials, (3 choices $18.95-$24.95), such as CÂRNĂCIORI DE GĂINĂ (Grilled chicken sausages, served with fresh cabbage salad, baked potato topped with sour cream and scallions, pickles and home made hot sauce on the side); Sides (5 choices at $5.45-$8.95), such as CARTOFI ȚĂRĂNEȘTI (Country style pan fried potatoes with onions and herb); and Desserts (2 choices at $8.95-$9.45).

Though the full menu is also available for Lunch, there is a Lunch Special ($10.95) which includes: Soup or Salad, plus a Side & Entree or a Pie, with a nonalcoholic drink. 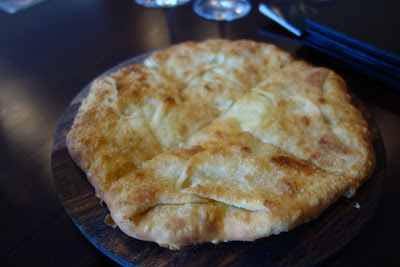 We began with a traditional Plăcinte la Tigaie, a thin, pan-fried pie with various fillings, and I'll note that the term "plăcinte" derives from the Latin "placenta," which means "cake." They serve five different types, filled with items such as potatoes, cabbage, apples, and cherries. I opted for the PLĂCINTĂ CU BRÎNZĂ ȘI VERDEAȚĂ ($8.95), which is filled with cow cheese and herbs. Traditionally, they use sheep's milk cheese but that is difficult for them to source locally so they chose to go with cow's cheese instead. The filling is made with egg whites, local feta, cottage cheese, dill and parsley, but they don't add any salt. The pie is thin, flaky and crisp, reminding me a little of a scallion pancake (without the scallions), and the cheese filling is creamy and lightly salty. A tasty start to dinner, it is an excellent comfort food and I would love to try it with some of their other fillings. And the PLĂCINTĂ paired very well with the Sparkling Wine! 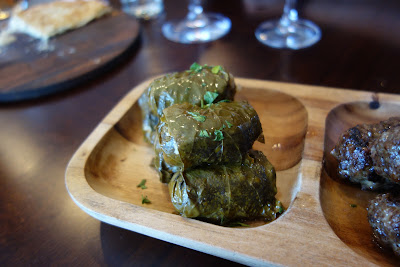 Artur wants to add a sampler platter to the menu, showcasing several of the different dishes so patrons can experience a range of different items. As such, he had his chef put together a sampler for my visit and I was glad to have the opportunity to try a number of different items rather than just a single dish. In the near future, you'll probably see a similar platter available on the menu.

The first dish was the SARMALE ($16.45), cabbage and grape leaves, stuffed with rice, chicken, tomatoes, carrots, fried onions and herbs, and served with sour cream. Please note that the above Sarmale was only made with grape leaves and not cabbage. The rice plays the prominent role in this dish, and with the chicken it is a very traditional and inexpensive Moldovan dish, especially prepared by the women in the household, and they are always served at Moldovan parties. These were delicious, with a slight crunch to the grape leaves and plenty of flavorful filling, with lots of rice and finely chopped chicken and veggies. They make for a tasty snack and pair well with white wine. 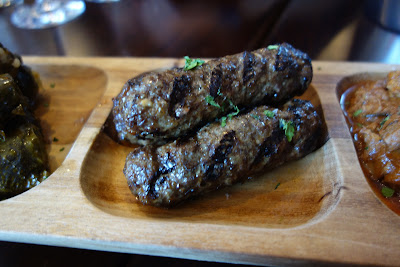 The second sample were the MITITEI MOLDOVENEȘTI ($19.45), grilled minced beef and pork rolls that are normally served with fresh cabbage salad, baked potato topped with sour cream and scallions, pickles and a home made hot sauce on the side. "Mititei" means "little ones." This is not as much a traditional Moldovan dish as it is more of a traditional Romanian one, however it has become one of their most popular items at the restaurant. This is a meaty and well-spiced "sausage," with a nice char, and it was enhanced by the compelling and flavorful hot sauce, though I didn't find it especially hot. 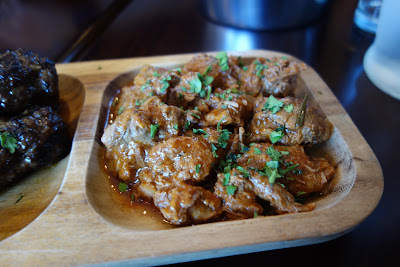 The final sample was the FRIPTURĂ DE MIEL ($24.95), roasted lamb, stewed in special wine and rosemary sauce, and normal served with roasted vegetables. The lamb is cooked for over four hours, braised and then roasted in the oven. All that slow cooking has made the lamb extremely tender, and you certainly don't need to knife to cut it. Your fork will suffice. The lamb also is superb, with a hint of rosemary, and plenty of juicy, tender meat, lacking that gaminess which turns off some people to lamb. As a lamb lover, this dish impressed me immensely and I highly recommend it. 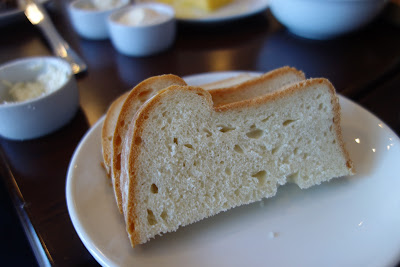 Artur mentioned that Moldovans don't like to let any food go to waste, so they will use bread to sop up any leftover sauce in a dish. At his restaurant, they make their own country-style bread, which has a soft but thick consistency, just right for dipping into sauce. 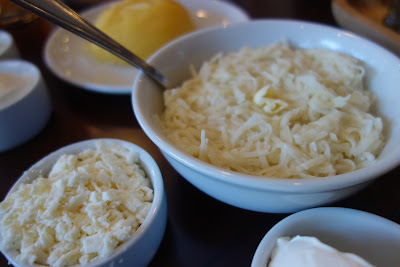 One of their sides is TĂIEȚEI ($5.45), home made noodles topped with butter and served with feta cheese. These are very traditional, hand-cut noodles, made from scratch, that are commonly used in soups. They are served with feta to add more flavor to them. The noodles had a nice consistency, not too soft or too hard, and with the salty feta, they made for a nice side. I could easily see these noodles used in other dishes too, such as soup or topped by the lamb stew. 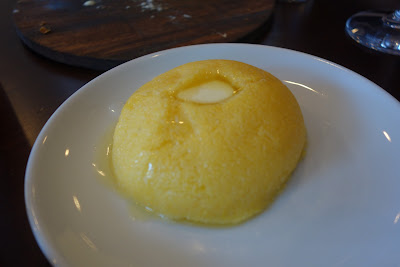 Another side was the MĂMĂLIGĂ ($5.45), a very traditional dish of polenta served with feta cheese and sour cream. They use a different type of corn flour which makes it more yellow as well as a bit harder than other polenta. Commonly, you mix the polenta with both feta and sour cream. It certainly had a firmer texture and the feta gave it a nice salty and creamy kick. 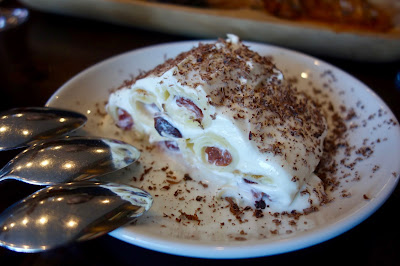 Dessert was CUȘMA LUI GUGUȚĂ ($9.45), sour cherries crepes with home-made whipped cream and chocolate. This is an extremely popular item on their menu, and they have even run out some nights when many customers ordered it. It was certainly a hedonistic pleasure, plenty of creaminess, tart sour cherries, and that spongy texture of the crepes, with a chocolate accent. It's easy to understand the popularity of this dessert and it was a great way to end a compelling Moldovan dinner.

The Moldova Restaurant is unique and interesting, with plenty of diverse and delicious food. Much of it is comfort food, sure to please your palate and belly. The welcoming vibe of the spot is also a compelling reason to visit. Plus, the fact they carry Moldovan wine makes a visit more of a total Moldovan experience. Kudos to Artur and Sandra Andronic for opening this restaurant, indicative of their passion for Moldova. I strongly encourage my readers to check out the Moldova Restaurant for lunch or dinner.
Posted by Richard Auffrey at 3:00 AM