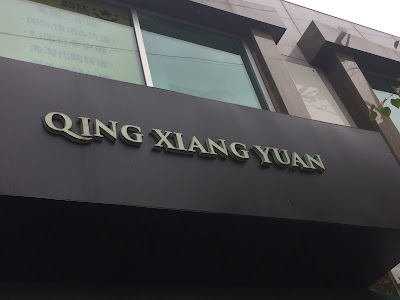 A whirlwind two-day journey to Chicago provided me with plenty of evidence that the city is an excellent place for food & drink. I'm also sure that I only scratched the surface and should return soon to explore further, to seek out more culinary depths in Chicago. Adam Japko and I were in the city to conduct a presentation on Design & Georgian Wine and took advantage of our down time to eat and drink our way across the city. 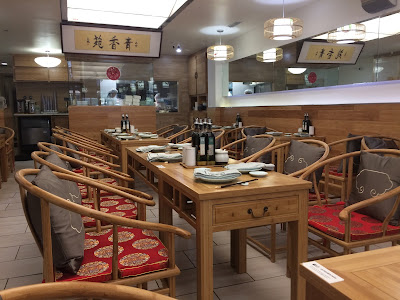 Our first stop, for lunch, was at QXY Dumplings, located in Chinatown. It's official name is Qing Xiang Yuan, which roughly translates as "far fragrance," and it is well known for its multitude of dumplings, roughly 40 varieties. It is a medium-sized spot, very clean and comfortable, with two large screens showing how the dumplings are created. On a Tuesday afternoon it was relatively quiet though I've heard that weekends are packed, with a line extending out the door. 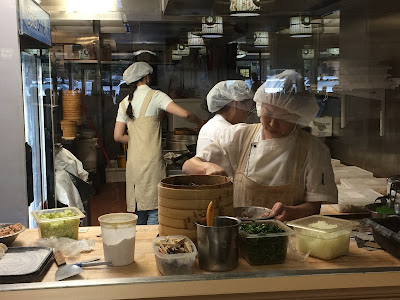 At the rear of the restaurant, you can watch skilled women hand-crafting the various dumplings. On the menu, there are plenty of dumplings choices for nearly any preference, including fillings such as beef, pork, chicken, seafood, and vegetable, each priced at $9-$14 for a dozen. Unfortunately, you can only order the dumplings by the dozen. I would prefer if they offered smaller sizes, such as a half-dozen, so I could experience more of the different fillings. So, it can be beneficial to go with a large group, which gives you a better opportunity to taste more dumplings.

What also elevates these dumplings is that each one contains a bit of "soup," a juicy burst which might catch you unawares if you don't realize it is inside the dumpling. The menu doesn't mention this juicy burst so I'm sure plenty of first timers didn't know of this fact until biting into one of the dumplings. They don't resemble traditional soup dumplings so you likely wouldn't expect the juicy burst, but once you know, you'll love it! Just be more careful on your initial bite into the dumpling. 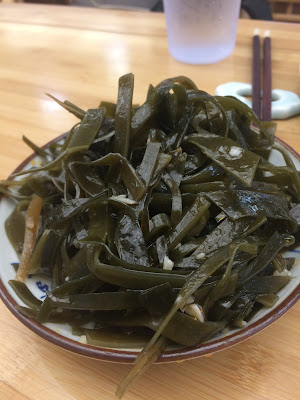 Their menu also offers a small amount of Barbecue Skewers and Appetizers, from Lamb Kebab to Chicken Hearts, from Spicy Kimchi to Red Oil Pig Ears. We ordered a plate of Shredded Kelp in Sauce ($5.00), which is a little like a very al dente pasta, with a taste of the sea. 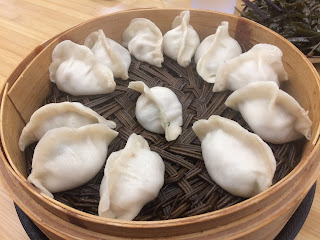 The Lamb & Coriander Dumplings ($9.99) were excellent, with a thin dumpling skin, plenty of savory lamb and a burst of liquid umami. You can see how plump they were, and each was spiced well, making it easy to finish off the dozen. 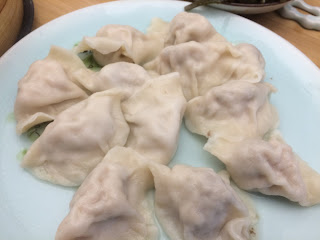 The Pork & Mushroom Dumplings ($8.99) weren't as aesthetically pleasing as the lamb ones but they were equally as tasty, with the liquid umami enhanced by the natural umami of the mushrooms. It would have been easy to keep ordering more dumplings until we were ready to burst but we wanted to leave some room for eating at other spots.

If you are in Chicago, I highly recommend you check out QXY Dumplings. 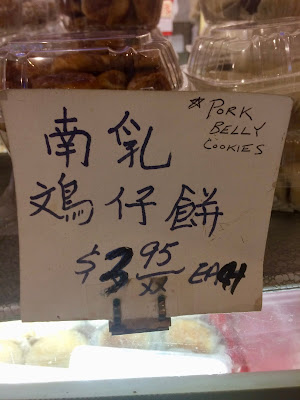 After lunch, we wandered around Chinatown, just checking out the various other restaurants, bakeries and shops. At one point, we stopped at the Saint Anna Bakery & Cafe and decided to get a couple of pork buns. However, we spied the above sign. Pork Belly Cookies??!! How could we resist, especially when one of the bakery staff raved about them. We bought one of the plastic containers of cookies and weren't disappointed. 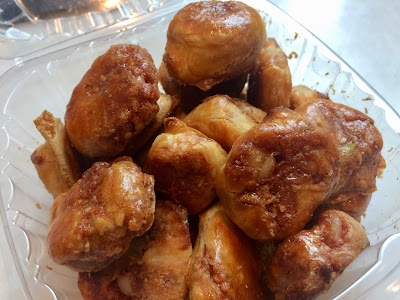 It isn't easy to describe these cookies. The cookie itself is a little flaky with a bit of a sweet glaze, and they definitely have pieces of crunchy pork belly and fat within them. And the rich taste of the pork belly is more than evident, an intriguing blend of sweet and salty, both savory and dessert. This shouldn't be that surprising of a dessert considering that there are numerous desserts that add bacon. Plus, the combination of sweet and salty is a killer mix. Why doesn't a bakery in Boston's Chinatown make this type of cookie?
Posted by Richard Auffrey at 3:00 AM