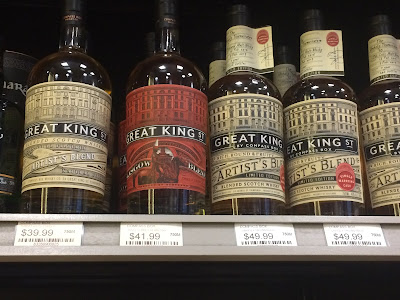 How do you blend Whisky like an Italian chef? That might seem to be an odd comparison but once you understand it, you'll embrace the concept.

Compass Box Whisky, established in 2000, produces and bottles a wide range of blended Scotch whiskies. At a recent tasting class at Redstone Liquors, two representatives of Compass Box Whisky led us through a tasting of 6 whiskies, explaining about the company and its philosophy. The representatives included Scott Ellis, the U.S. Western Regional Manager, and Kerrin Egalka, the U.S. Northeast Regional Manager. It was a fun, educational and tasty event, presenting a compelling comparison tasting, topped off by one of their high-end, limited edition offerings.

Compass Box was founded by an American, John Glaser, who once worked for Johnnie Walker. Glaser felt that too many Scotch companies were operating in the same way and he wanted to do something different, choosing to reach into the past and emulate some of the old whisky blending houses. Compass Box remains a small company, with only about 15 employees, and purchases high-quality distillates from numerous Scotch distilleries, blending the distillates as well as sometimes aging them further. 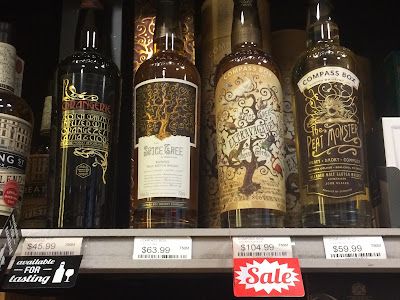 The company has five core beliefs which guide their operations and production. First, "Blending is a platform for creativity. A well-made Scotch whisky blend, made from excellent component whiskies, is something no single distillery can create, and can rival the complexity of the very best of single malt whiskies." Scott Ellis stated that their blending is conducted as if they were an Italian chef, meaning that they use only a small amount of high-quality ingredients, blending them carefully so that you can detect each component in the whole. Compass Box commonly blends only 2-4 high-end whiskies rather than dozens of different ones, so you can discern the individual characteristics of each specific whisky.

I've long said that blending is an art form, and that blenders, in both the wine and spirits worlds, don't receive as much attention or kudos as they deserve. It is also compelling to see the efforts of Compass Box as akin to an Italian chef. If you've been to Italy, you know that many of their best dishes are simply prepared, using the highest quality ingredients, and such dishes can taste amazing. This whisky blending isn't like the preparation of many stews and soups, where a large assortment of ingredients are added, and often using just what is available, even if it isn't high quality. Give me simplicity and high quality any time.

Second, "Good oak rules. Up to 70% of the flavour in mature Scotch whisky comes from the interaction of the spirit with the cask it is aged in. You can only create a great whisky when you use great wood." The barrel is twice as important as the base spirit, and is truly the "unsung hero" of the production process. That again is something I have written about before, emphasizing the integral nature of barrels. Compass Box takes great care to purchase only the best barrels, to ensure their final product is excellent. It is also why they have chosen to undergo a second maturation, a finish barrel, for some of their whisky.

Third, "Good whiskies don’t need age statements. We believe whisky quality is determined by flavour and character, not by an age statement. There is no short-hand for quality in Scotch. Age statements can be a red herring." Some people certainly fall into the assumption that older Scotch is better, but that certainly is not the case. The taste of the Scotch should be the definitive factor, not merely its age.

Fourth, "Whisky should be bottled without chill-filtering and at its natural colour. Unlike most Scotch whisky producers, we see no reason to artificially colour our whiskies, or to strip away mouthfeel by chill-filtration. These are cosmetic steps we never take." This is a position I've started to see more and more with some of the smaller whisky producers, trying to maintain the natural nature of the whisky, without doing anything to its color or mouthfeel.

Fifth, "Drink good whisky any way you like. No rules. Good whisky can be enjoyed neat, with water, ice, mixers, in a culinary cocktail or paired with foods. There are no rules. Simply share and enjoy." This is another issue I fully agree with, and have written as much previously. Simply enjoy whisky as you life as we all have our personal preferences. Don't let someone else tell you how you must enjoy your Scotch. 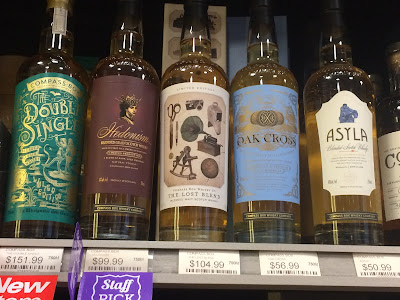 Compass Box makes three different types of blends, Blended Scotch Whisky, Blended Malt, and Blended Grain, and their portfolio is basically broken down into the Signature Range, Great King Street, and Limited Editions. The Great King series was inspired by recipes from 19th century distillers, and includes two whiskies, the Artist's Blend and Glasgow Blend. It was the Artists Blend which was the focal point of our tasting, the control for our experimental tasting.

The Artists's Blend is the base whisky for their new Marrying Cask program the pilot which launched last year in Massachusetts. Using the Artists' Blend, they did a second maturation, a marrying of sorts, in four different types of barrels. One whisky with five different expressions. Only three barrels of these casks were imported into the U.S. and Massachusetts is the only state which received all four marrying casks. Other states only received one or two different types, so we were very lucky to have the opportunity to sample all four. 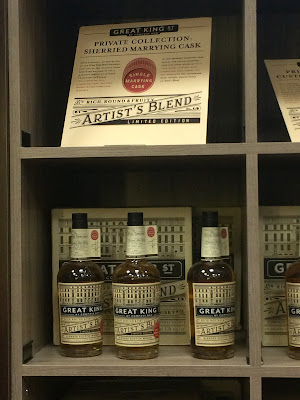 The base Artist's Blend is a blend of 46% Lowland Single Grain Whisky, 29% Northern Highland Single Malt, 17% of a different Northern Highland Single Malt, and 8% Speyside Single Malt. It was also matured in 75% First Fill American Oak barrels, 17% New French Oak, and 8% First Fill Sherry Butt. (Note: The "Sherry" butts come from Bodegas José y Miguel Martin, located in Huelva, which is actually located outside the legal Sherry region. As such, their products are not technically Sherry.)

The Artist's blend is bottled at 43% ABV and uses about 50% malt whisky, which is higher than the 30% that many other blends use. Grain whisky is inexpensive so the large producers tend to use more grain than malt, which also diminishes the character of the whisky which comes more from the malt. I found the Artists's Blend to be a pleasing blend of fruit, spice and a touch of smoke, more apple pie and fall spices with hints of vanilla and cinnamon. Easy drinking and it would do well on its own or in a cocktail. 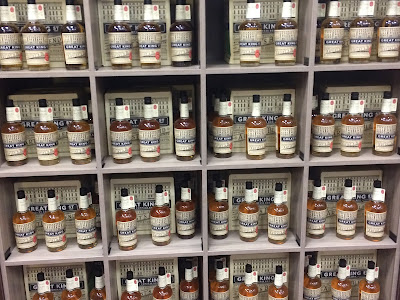 We then proceeded to taste the four different Marrying Casks ($49.99/bottle), each which uses the Artist's Blend and simply ages it for a second maturation in a different type of barrel. Despite the fact that each uses the same whisky, they are distinctively different, the second maturation, about 6-12 months, bringing out a significant change in the flavor profile of the whisky. It was a fascinating comparison tasting, and all of the attendees had their own personal favorite. 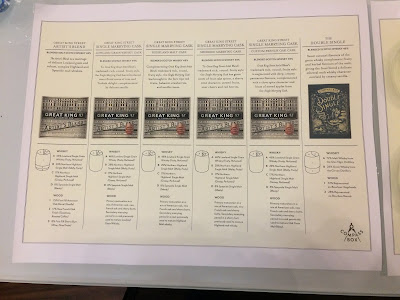 The next marrying cask used barrels which had previously aged Highland Malt Whisky. This whisky had a strong, fruity nose with lots of berries and tropical fruit on the palate. There were vanilla accents and subtle spice notes but this whisky was all about the fruit. Quite delicious! 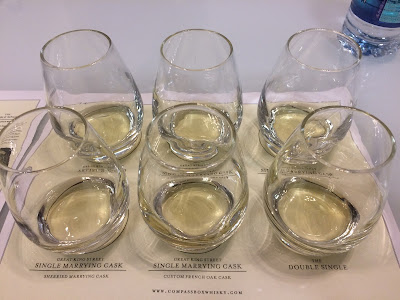 The third marrying cask used "Sherry" butts which previously had aged Highland Malt whisky.  This whisky though did evidence some typical Sherry aromatics, as well as some saline notes on the palate. There were some red fruit notes as well, a mild sweet tang, and a lengthy finish. Very tasty. 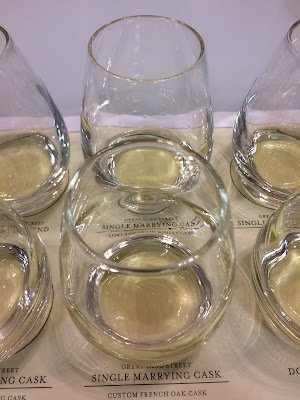 The final marrying cask was conducted in a barrel previously used to age the Oak Cross Malt blend, a type of hybrid barrel with both French and American oak. This whisky had a fruity aroma but on the palate, it was more spice and cream, with subtle hints of berries and vanilla. It wasn't as fruity as the second marrying cask but delicious in its own way

Overall, all four marrying casks were compelling for their unique flavor profiles and which will appeal to you depends on your own personal preferences. The second marrying cask might have squeaked out as my personal favorite, but it probably would depend on my mood on any specific day. 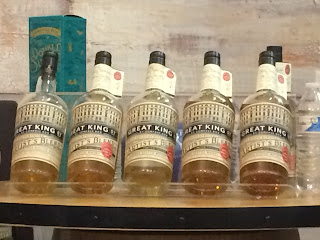 Finally, we tasted one of their limited edition, higher-end whiskies, the Double Single ($152-$175). The concept of this whisky was to "find complexity within simplicity." As such, it is a blend of only two whiskies, 72% Glen Elgin Single Malt (aged in re-charred hogshead bourbon barrels) and 28% Girvan Single Grain (aged in re-charred bourbon barrels). This is the third time this whisky, with a 46% ABV, has been released, and only about 5800 bottles were produced and bottled in March 2017.

The Double Single was superb, a silky smooth, complex and well-balanced whisky with a fascinating melange of flavors. There were hints of vanilla and caramel, berries and tropical fruit, herbs and spices. Each sip seemed to bring something new to my palate. Ellis mentioned it reminded him of Werther's Original candies and I could see the connection. This is definitely a whisky that probably is best served on its own and not mixed in a cocktail, where it may lose some of its complexity. If you want a superb whisky, then you won't go wrong buying a bottle of the Double Single.

Overall, Compass Box Whisky is producing plenty of delicious and intriguing blended whiskies. The company has an excellent philosophy and I love the idea of them equating their blending to that of an Italian chef. With a range of price points, you should be able to find something from their portfolio that appeals to your preference and wallet/pocket book.
Posted by Richard Auffrey at 10:45 AM