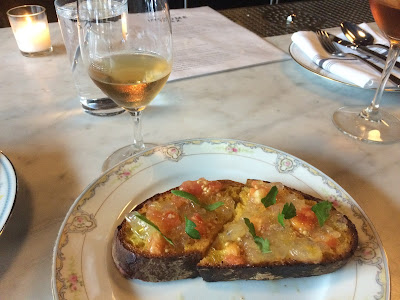 While shopping at a wine & spirits store in Chicago, we received a recommendation for a nearby wine bar & restaurant, Income Tax, which was only a couple buildings away. Although we already had dinner plans elsewhere, we had a little free time before our reservation so we chose to stop by Income Tax for a drink and a quick bite. We were very fortunate that we made that stop as Income Tax turned out to be an impressive spot.

Located in the Edgewater neighborhood, Income Tax is less than a year old, having opened last December. The restaurant is owned by Nelson Fitch, who is joined by Collin Moody, General Manager, and Chef Ryan Henderson. Interestingly, Nelson is the husband of Veronica Roth, author of the dystopian Divergent series, which was turned into a film series. During our visit, as we sat at the bar, we met Collin, who was personable and knowledgeable.

The restaurant is cozy and elegant, with a lengthy bar and a casual, welcoming vibe. We sidled up to the bar and checked out the drinks menu, which immediately impressed with its diversity. There were seven wines by the glass ($11-$14), almost all French wines, and included a Pet-Nat. There were also four Sherries by the glass ($9-$14) and four Georgian wines that were on special. The bottle list has plenty of interesting choices from all over the world, most sure to interest wine lovers, including many classics but also some hot, new wines, and most were reasonably priced from $50-$100.

They also have a diverse list of Beers and 13 Ciders, including Spanish, French, German and U.S. ciders. Their Spirits list is also diverse and fascinating, and you won't find many of the usual suspects but rather you'll find more small production, artisanal and unique bottlings. You'll also find several Vermouth cocktails as well as other intriguing cocktails. There is so much on their drinks menu to interest an imbiber.

I began with a glass of the Emilio Hidalgo La Panesa Especial Fino Sherry ($14), an amazingly delicious and interesting Fino which is an average of 15 years old. As it has undergone a slight oxidation, the color is more golden. It was rich and full bodied, with a saline element as well as notes of brioche and almonds. During our time at the bar, Collin also offered us complimentary tastes of two other Sherries, the Yuste Manzanilla and the González Byass Tio Pepe En Rama, 2016. Both were delicious in their own right, thrilling a Sherry lover like myself. I also later ordered a glass of the Navazos-Palazzi Ron Oloroso Cask ($16), which I've previously reviewed.

The Food Menu is small but varied, touching on various European cuisines, from Spain to Alsace. The Menu is divided into Bites (4 choices, $4-$10), from Marinated Olives to Strangolapreti (spinach & ricotta dumplings); Jars (3 choices, $10-$12), from Boquerones to Rillettes; Cheese (3 choices, $6-$8); Appetizers (5 choices, $6-$15), from Flammenkuchen to Tortilla Espanola;
and Entrees (5 choices, $15-$25), from Trout Meuniere to Coq au Vin. Much of this is excellent bar food, a fine accompaniment to their varied drinks. 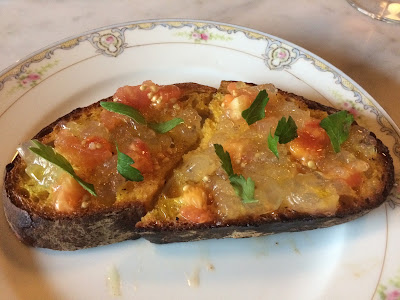 We ordered the Pan Con Tomate ($6), a traditional Spanish dish, made with Saffron toast and Fino Sherry. There was a tomato gelatin-like topping and overall, the dish worked very well, a nice blending of soft and crusty bread with the bright acidity of the tomatoes and the subtle saffron elements. And with a glass of Sherry, it was a superb pairing. 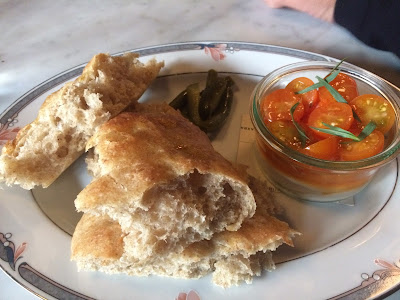 We also opted for a Jar of the Whipped Chèvre ($10), made with sun gold tomatoes and tarragon, and accompanied by home-made bread. As an ardent bread lover, this fresh and soft bread, was delicious and I could have enjoyed it on its own. But, the whipped chèvre was creamy and flavorful, enhanced by the tomatoes, and made for a great spread. It was the type of tasty item which makes you want to lick the jar clean.

These were both relatively simple dishes, but they were executed perfectly, indicative of a skilled kitchen. They certainly made me crave to try some of their entrees, to see that culinary skill on a grander scale. I'd also love to return to try more items from their drinks menu. This is the type of neighborhood spot I would become a regular if it were located close to me. It earns a high recommendation. 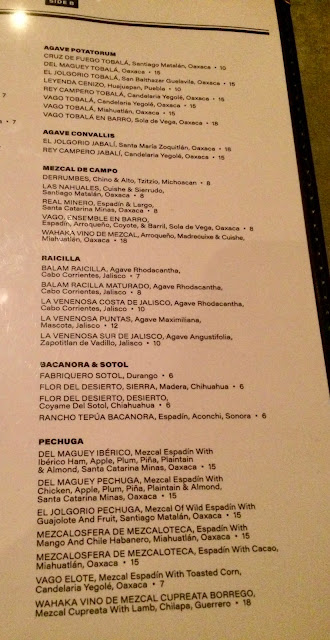 Collin of Income Tax also highly recommended that we later check out Estereo, a bar in the Logan Square region, and his recommendation was spot on. During the day, the bar serves coffee and snacks, but at night, it is a full-scale bar, specializing in spirits from Mexico, Central America, and South America. We visited the bar after our dinner. The bar is triangular shaped, open to the street, and Latin American music sets up the lively atmosphere.

The Drinks menu was fascinating and compelling, offering more varieties of Mexican, Central American, and South American spirits than I have ever seen elsewhere. The lengthy list of Pisco, Cachaca, Tequila, Mezcal, and Rum, was mind-boggling. I could spend many a night exploring this list, gaining a deeper appreciation for these spirits. I've never seen another bar with over 25 Pisco on their list. And there was so much wonderful Mezcal!

Of course they create a variety of cocktails ($9-$12) from all of these spirits, such as the Pisco, made with Seedling Farms Rhubarb, Cocchi Americano, Lime, Pina Bitters and Force Carbonated; Agricole, made with Agricole Coconut, Passion Fruit, Absinthe, Lime and Blackstrap; and Rum, made with Paranubes Auguardiente de Cana, Klug Farms Blueberrt, house Falernum, Lime and Frutabomba Bitters. We began the evening with a few cocktails, and they were all delicious, well balanced, and had interesting flavor combinations.

The bartenders were personable, knowledge and very helpful, answering any questions and providing recommendations. So, it was a great place not only to enjoy a great drink but to learn something as well. 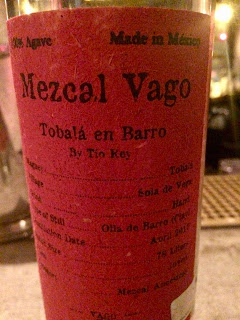 At the end of our evening, as we prepared to leave, one of the bartenders came over and offered us a complimentary drink of Mezcal Vago Tobala en Barro, a rare and superb Mezcal, which was distilled in olla de barro, clay pots. This was an especially nice gesture and the Mezcal was a fantastic way to cap the evening.