Kriselle Cellars: From Engineer to Winemaker

Some of the original inhabitants of the Rogue Valley in Southern Oregon were the Takelma, Native Americans, who settled primarily along the Rogue River. Though their lands were agriculturally fertile, they only seemed to grow a single crop, tobacco. The influx of white settlers into the region during the gold rush of the 19th century caused friction with the indigenous population, eventually leading to the Rogue River Wars of 1855-56. That end result to these wars was the forced relocation of the Takelma to coastal lands in northern Oregon, leaving their fertile lands for white settlers. About 150 years later, some of those lands are now covered by vineyards. 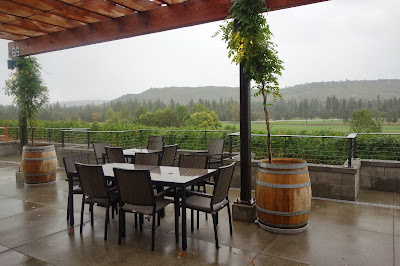 Along the Rogue River, you will now find Kriselle Cellars, located on the 200 acre Buxton Ranch, which also raises horses and cows, even producing some American Waygu beef. With their first vineyard planted in 2006, they now have about 25 acres of vitis vinifera, mainly Cabernet Sauvignon, Cabernet Franc and Tempranillo, but with small amounts of Malbec, Sangiovese, Sauvignon Blanc and Viognier. Their first vintage was 2009 and they now produce 2000-3000 cases annually, with sufficient facilities to accommodate growth, which they intend to be slow. They still buy about 45% of their grapes, though only from other vineyards in the Rogue Valley. Their beautiful tasting room only opened about one year ago. 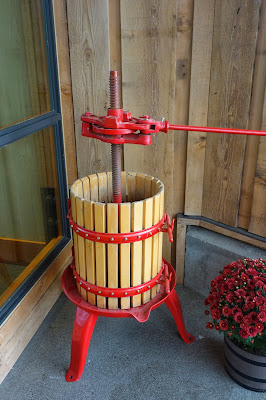 Scott Steingraber, the owner and winemaker at Kriselle, originally worked for twenty years as a civil engineer, travelling often around the West Coast. As a hobby, he eventually started making wine at home when he spent some time in Utah. This led him to to take some winemaking classes at UC Davis though he never acquired a formal enology degree. Located just outside the entrance to their tasting room, and pictured above, is the actual wine press that Scott first used. He chose to name the winery after his wife, Krisell, though added an extra "e" so people would have an easier time pronouncing the word. 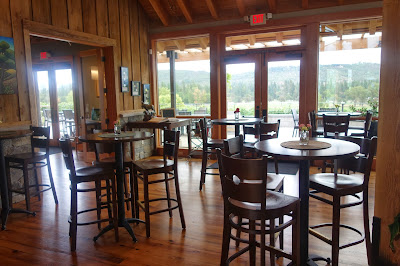 Why did he select Southern Oregon? About ten years ago, Scott was seeking to purchase a load of Pinot Noir grapes from the Willamette Valley. However, at that time, the seller also received a load of Cabernet Sauvignon from Southern Oregon. Scott sampled the Cabernet and found the taste intense and flavorful, and decided to purchase it instead of the Pinot. The source of the Cabernet intrigued him and that led to his further interest, and eventual purchase, of an estate in Southern Oregon. 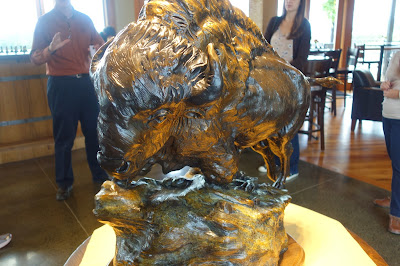 Just inside their tasting room is a large buffalo statue, called "Statue of a Warrior," which was created by Michael Hamby, a former football player for the Buffalo Bills.

Because of his prior career as an engineer, as a winemaker, Scott is very data driven, analytic and regimented. He also relies on professional advice for assistance. He is more scientist than artist, but his wines do not seem clinical and sterile, instead possessing life and verve. Scott is also very keen on cleanliness and hygiene, and the walls of his 5000 square feet winery are painted white, making it easier to see any dirt or cleanliness issues. He stated that visitors to the winery think that it looks brand new, when it is merely pristine. Scott creates wines to be food friendly, and he also makes some 500ml bottles just because he likes that size. The logo on each bottle of wine is the image of a wine bottle rising up from a pile of soil, meant to symbolize the importance of terroir. 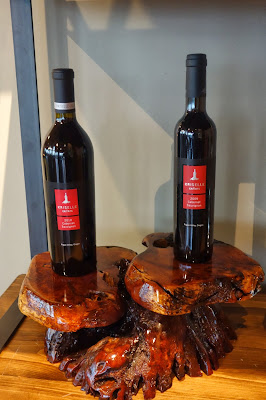 As for white wines, we tasted the 2012 Sauvignon Blanc ($21) and 2012 Viognier ($20), both crisp, dry and with pleasing flavors. Nicely balanced, these whites showcased the varietals well. As for reds, the 2010 Cabernet Sauvignon ($32) and 2009 Cabernet Franc ($27) were both big wines, but not overly so, possessed of delicious red & black fruit and spice flavors. The tannins were restrained and each possessed nice depths of flavor and complexity. I preferred the Cab Franc, which contains a little Cabernet Sauvignon, and it didn't evidence any vegetal notes. Either red wine would pair well with hearty dishes, from Pasta Bolognese to steaks. 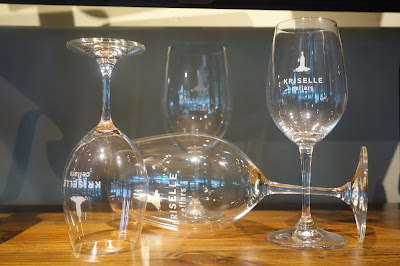 My favorite wine of the tasting was the 2010 Di'Tani ($25), which is named after a Takelma word meaning "the rock above." It is a blend with about 50% Cabernet Franc and the rest a mix of Cabernet Sauvignon, Malbec, and Tempranillo. It is an intriguing wine with a harmonious blend of earthiness, red and black fruits, and dark spice. Good acidity, manageable tannins and a lengthy, satisfying finish. Highly recommended. 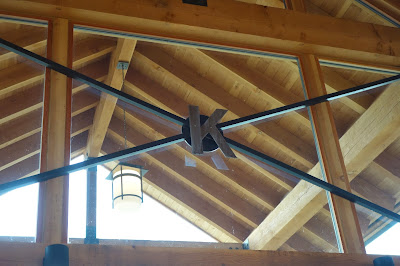 Scott is representative of some of the winery owners in Southern Oregon who have taken on wine as their second career. After a lengthy career as a civil engineer, Scott moved on to making his hobby a new profession. His career change was obviously fueled by passion, and it was evident in our discussions with him at the winery. I wish him the best of luck.
Posted by Richard Auffrey at 3:00 AM